In honor of Gay Pride month, when New York, Los Angeles, San Francisco, and many others cities across the country hold their annual parades, we wanted to find the gayest neighborhoods across America. No surprise that San Francisco’s Castro neighborhood is at the top of the list, but throughout the country there are suburban and small-town neighborhoods with high concentrations of gay people. Even in the big, expensive cities, it’s possible to find a gay community without spending a fortune. And the picture looks different for gay men and women, who often cluster in very different neighborhoods even in the same metro. 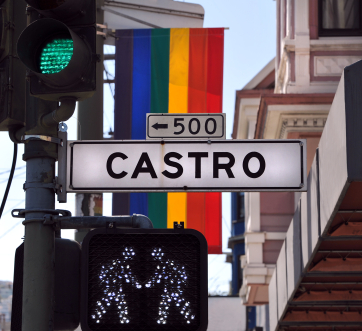 Here’s what we did. For each ZIP code in the U.S., we calculated the share of households that are same-sex male couples and same-sex female couples, based on the 2010 Census. Then, we combined the Census data on where gay people live with median price per foot of listed homes in each ZIP code on Trulia over the past year.

(The fine print: The Census doesn’t ask sexual orientation, of course, so the only way to measure gay neighborhoods is based on where couples live. The Census data requires some corrections and adjustments, described here. Finally, ZIP codes don’t line up perfectly with neighborhoods, but we did our best to use the closest neighborhood names that correspond to the ZIP codes in our analysis.)

The top neighborhoods for women are pretty different.

A Gay Neighborhood for (Almost) Every Pocketbook

The top neighborhoods across the country for male and female couples range from top-dollar (the Castro and Provincetown) to downright affordable (Pleasant Ridge, MI, and Avondale Estates, GA. So even if you can’t afford West Hollywood or Jamaica Plain, there’s a gay neighborhood in your price range somewhere in America. But if work, love, or family means you can’t move across the country, and you want a gayer neighborhood in your local market, what are your options? Let’s take a closer look at the three metros with the largest gay populations: New York, Los Angeles, and the San Francisco Bay Area.

The neighborhood with the highest concentration of male couples in New York is Chelsea (ZIP 10011, with median price per square foot of $1199), followed by Clinton (10036, $1166) and the West Village (10014, $1210). What if you can’t afford a thousand dollars per square foot but still want to live among the gay brotherhood? Look outside Manhattan. Many male couples live in downtown Jersey City (07302, $452), Hunters Point / Long Island City in Queens (11109, $813), and Brooklyn Heights (11201, $727). Even though these neighborhoods are still expensive to anyone unaccustomed to New York prices, they’re affordable relative to the gayest parts of Manhattan.

The gay center of LA for men includes two zip codes in West Hollywood: roughly from Doheny Drive to Sweetzer (90069, $481) and from Sweetzer to La Brea (90046, $465), as well as the Hollywood Hills (90068, $410). By Los Angeles standards these are expensive areas, though New Yorkers might not think so. Much more affordable, and still very gay relative to the rest of the region, is Signal Hill (90755, $200), a small city surrounded by Long Beach, about 30 miles south of West Hollywood.

In each of the three largest gay communities in America, men and women cluster separately and far away from each other. The gay version of “Men are from Mars, Women are from Venus” would have men from Manhattan, West Hollywood, or San Francisco, and women from Brooklyn, Long Beach, and Oakland. In other metros, too, gay men and women tend to separate. In Washington DC, for instance, central Logan Circle and Dupont Circle have the highest concentration of male couples, whereas women cluster in suburban Takoma Park, MD, and parts of Alexandria, VA.

Across these metros and the U.S. overall, the common pattern is that gay men tend to live in more expensive areas. The typical same-sex male couple lives in a ZIP code with a median price per square foot of $208, compared with $139 for same-sex female couples and $127 for all households. Why are gay couples – especially male couples — in expensive neighborhoods? A big reason is that same-sex couples are less likely to have kids: 10% of same-sex male couples and 24% of same-sex female couples have kids in the house, compared with 41% of all married and unmarried couples. Couples without kids need less space and therefore are better able to afford desirable, expensive urban neighborhoods, as one academic paper found. At the same time, gay men contribute to the gentrification of many urban neighborhoods: another academic paper showed that home prices rise faster in neighborhoods with higher concentrations of gay couples. But even the most expensive big cities have relatively affordable neighborhoods for gay couples. Happy Pride!