In the spirit of Fat Tuesday excess, we ranked America’s most sinful cities and their saintly counterparts. We crafted our list by using the seven deadly sins of lust, gluttony, greed, sloth, wrath, envy, and vanity, or pride.

For each sin we looked at the characteristics. For instance, for lust we measured how many adult entertainment venues a city had per resident, and for sloth, we used surveys about exercise. Finally, we aggregated the data from all sins to create our top list of sin cities and saintly sanctuaries.

So, whether you want to indulge in forbidden pleasures or do good and avoid temptation, we crunched the numbers for you. Here’s where you are most and least likely to be in good company, either indulging or avoiding the seven deadly sins. 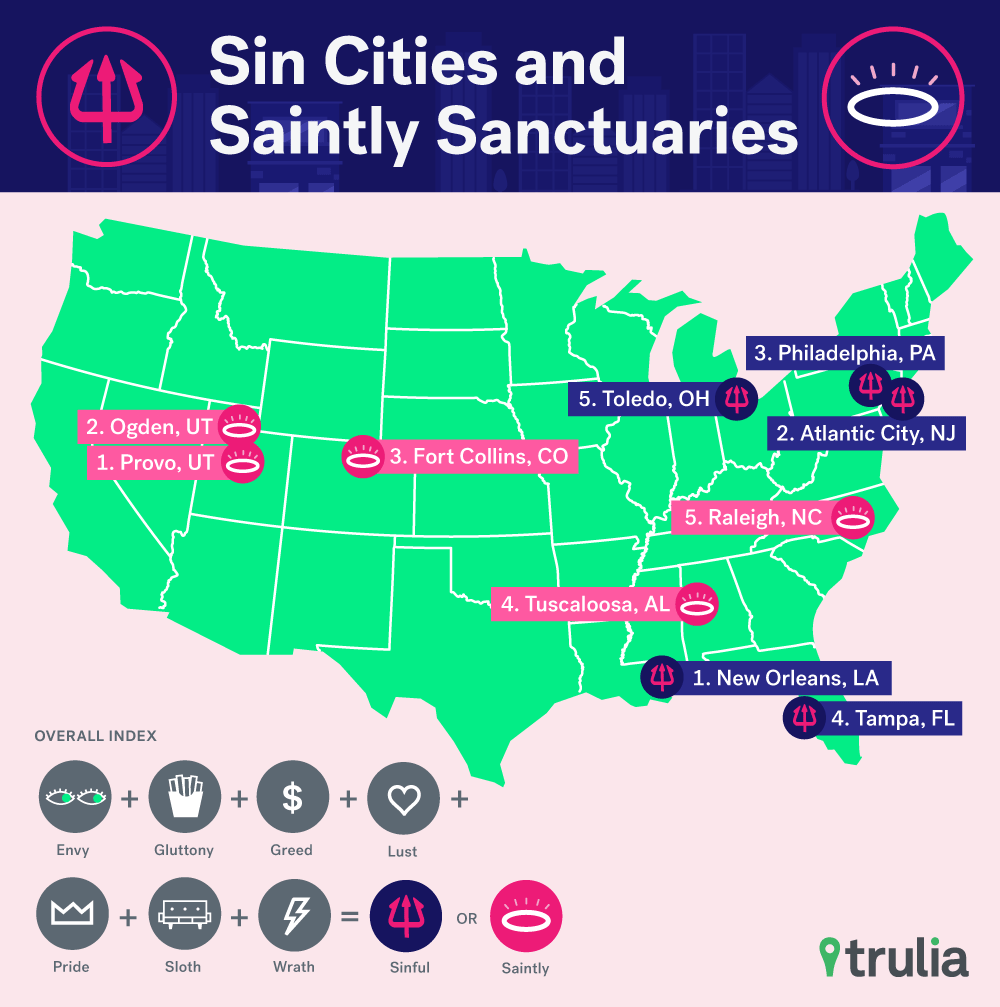 New Orleans still reigns as king of Mardi Gras. With nearly three times the national rate of adult entertainment establishments and twice the number gambling establishments per household, it scores highly in lust and greed. Additionally, above average rates of smoking, binge- and heavy-drinking and obesity, as well as high incidents of violent crime make the Crescent City a great place for those looking to explore gluttony and wrath.

Provo-Orem, and Ogden-Clearfield, Utah, on the other hand, are the places to be if you want nothing to do with pre-Ash Wednesday festivities. People in these cities were more likely to have reported doing some exercise recently. They also have no gambling establishments and a population that claims to donate to charitable causes at more than twice the national rate, making them the least greedy cities in the comparison. 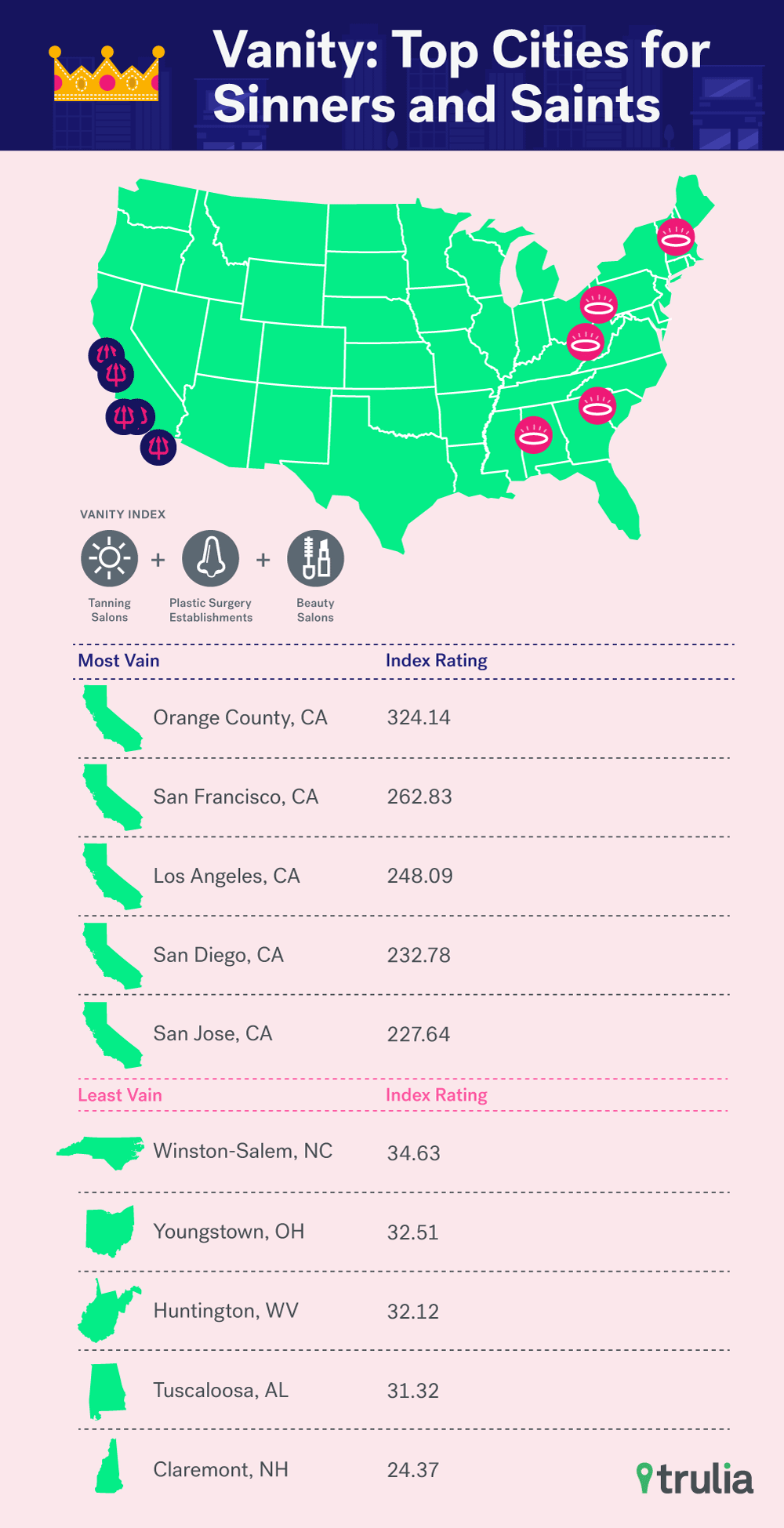 If you’re tired of being surrounded with souls plagued by envy, head to El Paso, Texas, where the difference in the listing price of homes between the 25th and 75th percentile as a proportion of its median listing price, is the smallest at one-third the average of the 150 city comparison. Also on the list of least envious places is Fargo, ND and Anchorage, Alaska, with listing price differences 30% and 26% lower than average. Fairfield County, Conn. and Detroit, Mich., have the largest difference in home listing prices as a proportion of their median listing price, at 65% and 58% above the comparison average, making them the most envious places in our comparison. New York and Philadelphia, not to be outdone, also come in at 42% and 32% above the national average. 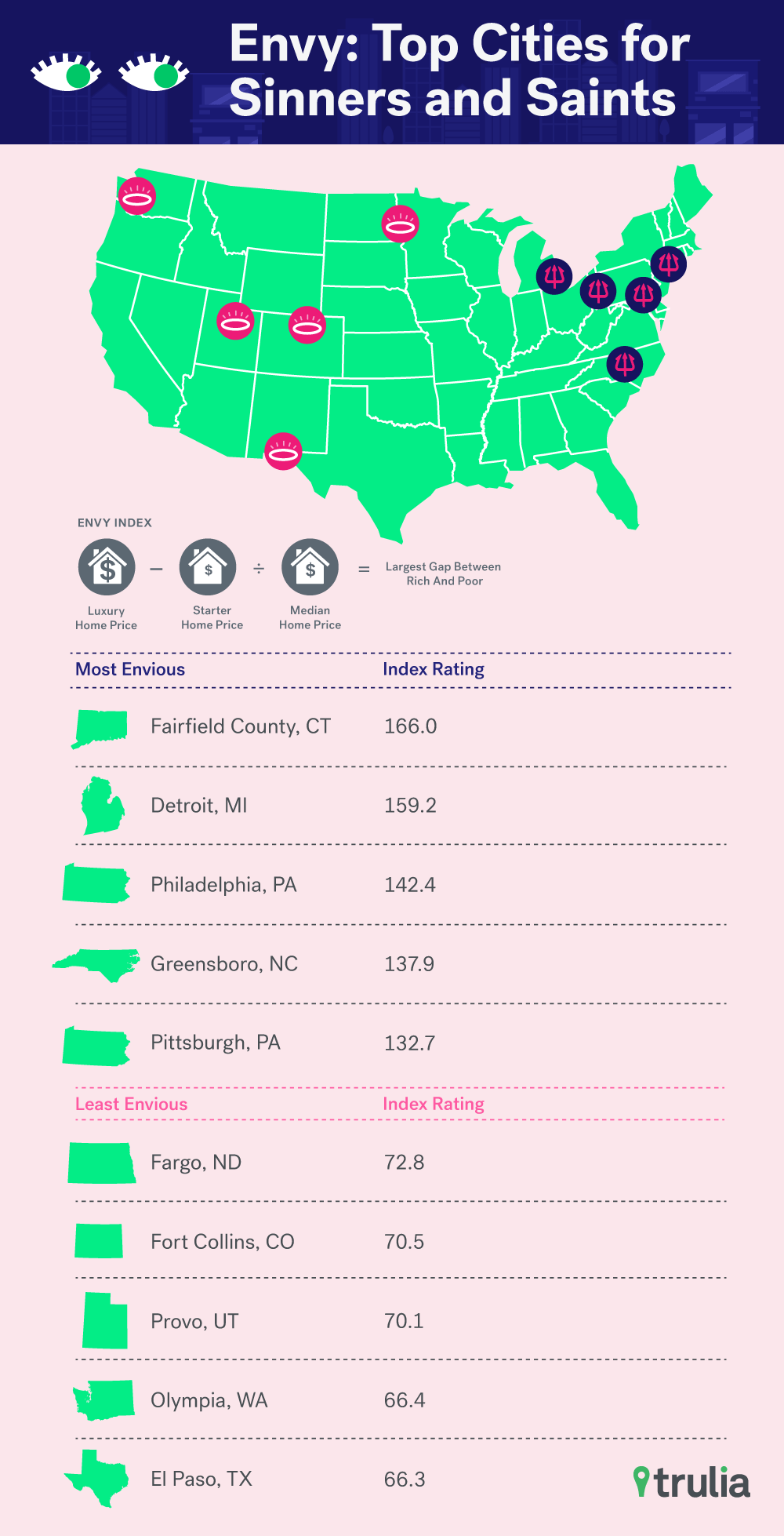 Sloths, take note (hands free, of course); McAllen, Texas, has the highest percentage of people who report doing no exercise over a 30-day period at 36.6% compared with 23% nationally. Boulder and Fort Collins, Colo., report the lowest proportion of residents who don’t exercise at 9.2% and 12.4%, respectively. 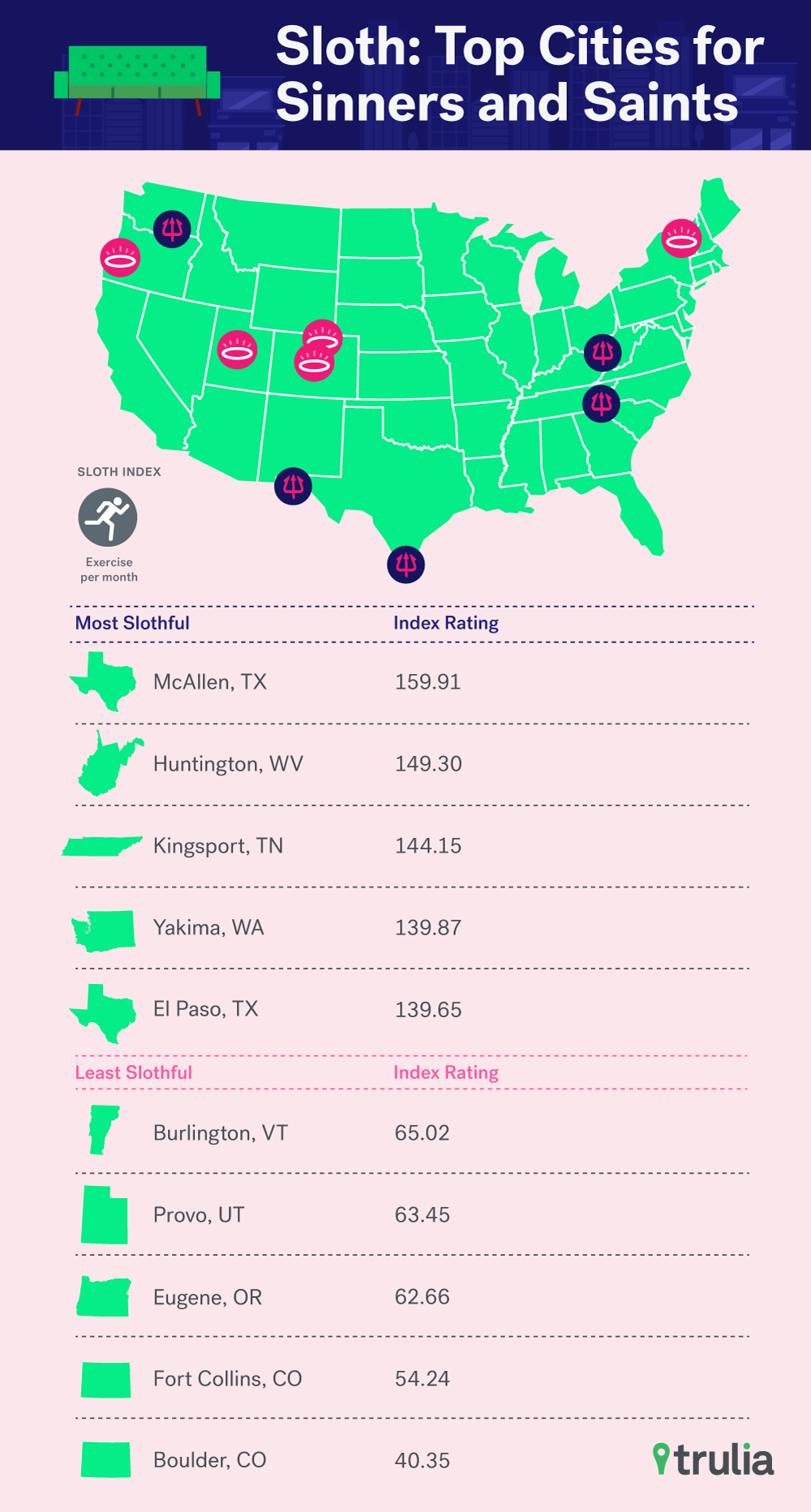 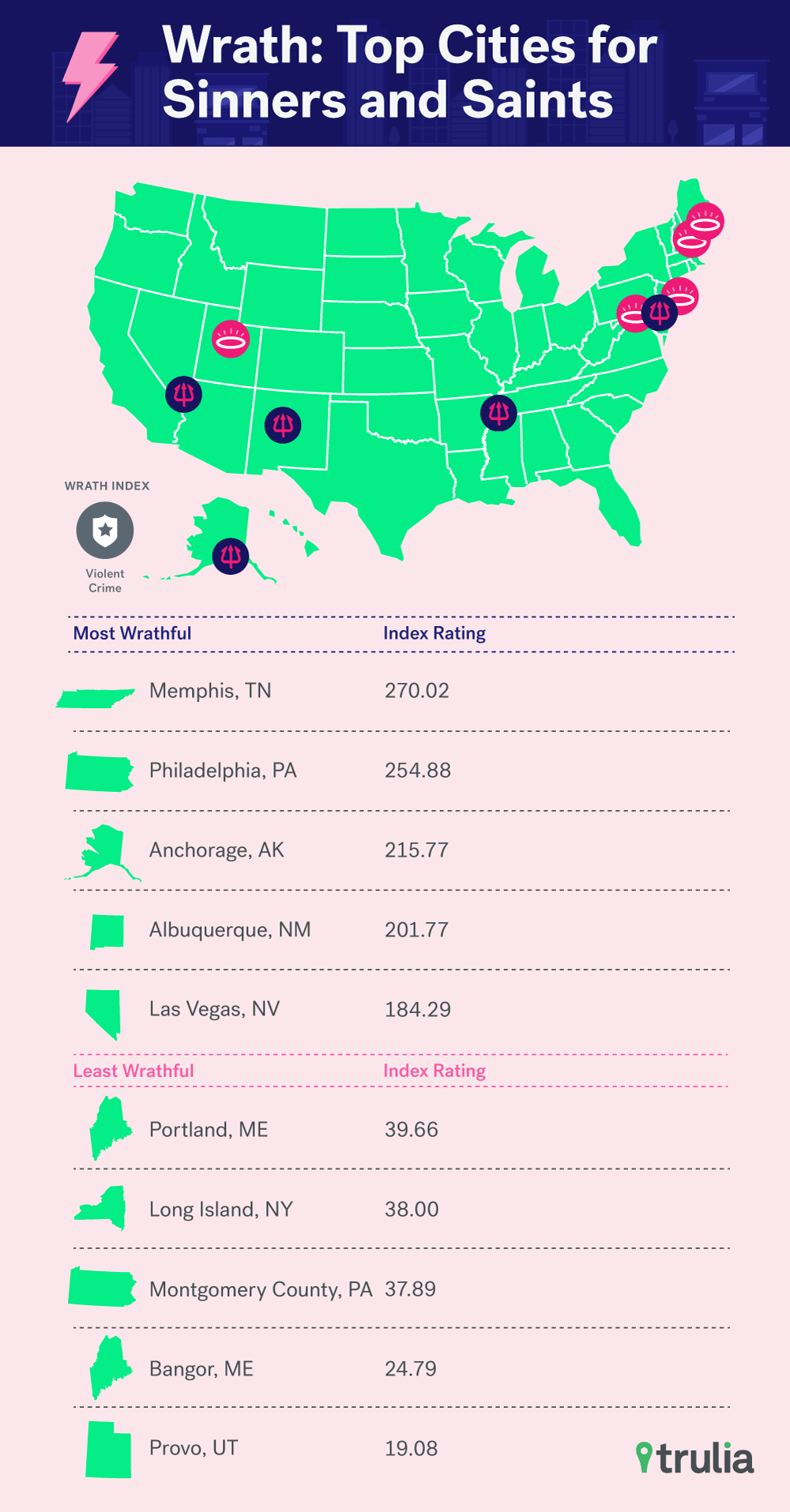 Atlantic City, N.J., second only to New Orleans in most overall buck wild Mardi Gras location, has enough adult entertainment establishments to top the national average by a whopping 12.9 times on a per household basis, making it the most lustful city by far. Las Vegas and Honolulu, ranked second and third in lust respectively, look buttoned up in comparison at 7.3 and 4.3 times the national average. Portland, San Francisco and Los Angeles also make the top ten to ensure your trip along the coast isn’t without temptation.

If you want to let your inner glutton shine (as if coated in grease and drink), make your way to Sioux City, Iowa or Scranton, Pa., where you won’t have to drink or smoke alone and the obesity rate is 30% and 15% above the national average, respectively. In the comparison binge drinking rates are highest, 66% higher than average, in Fargo, N.D. Heavy drinkers can be found in Hilo, Hawaii, and Jacksonville, Fla. Obesity rates are highest in McAllen, Texas (coincidentally) at 61% percent higher than the national average. 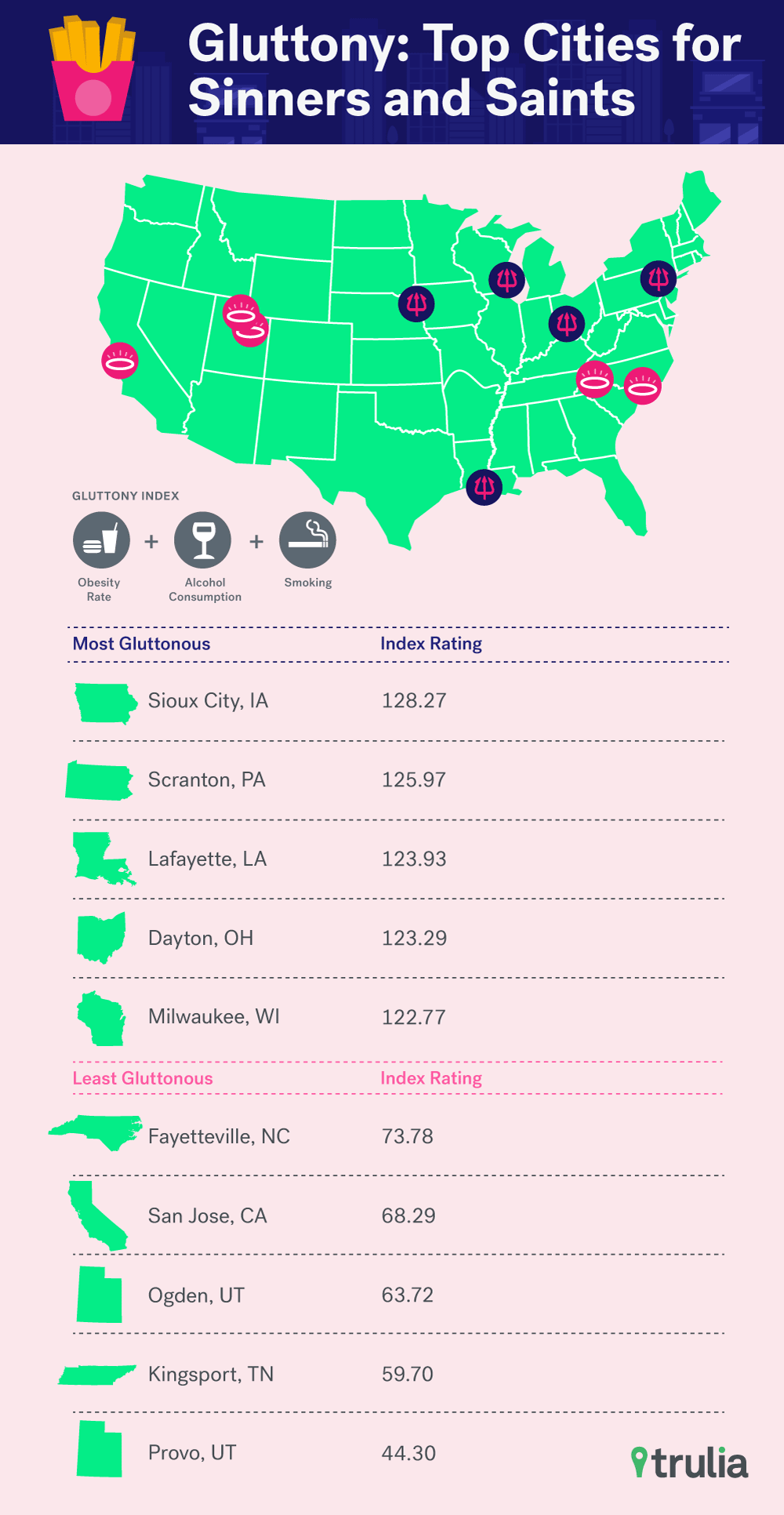 Lastly for the greedy among us, Billings, Mont., offers more than 54 times the national average number of casinos per household, shooting it to the top of our list. Of the other top 10 cities, in addition to having plenty of casinos, Atlantic City residents claimed the lowest amount of charitable contributions on their itemized tax filings in 2013, keeping them high on our greedy list. You won’t find a single race track or casino in Provo, on the hand, and residents claim to donate nearly 10 percent of their income to charitable causes, making them the least greedy in our comparison. 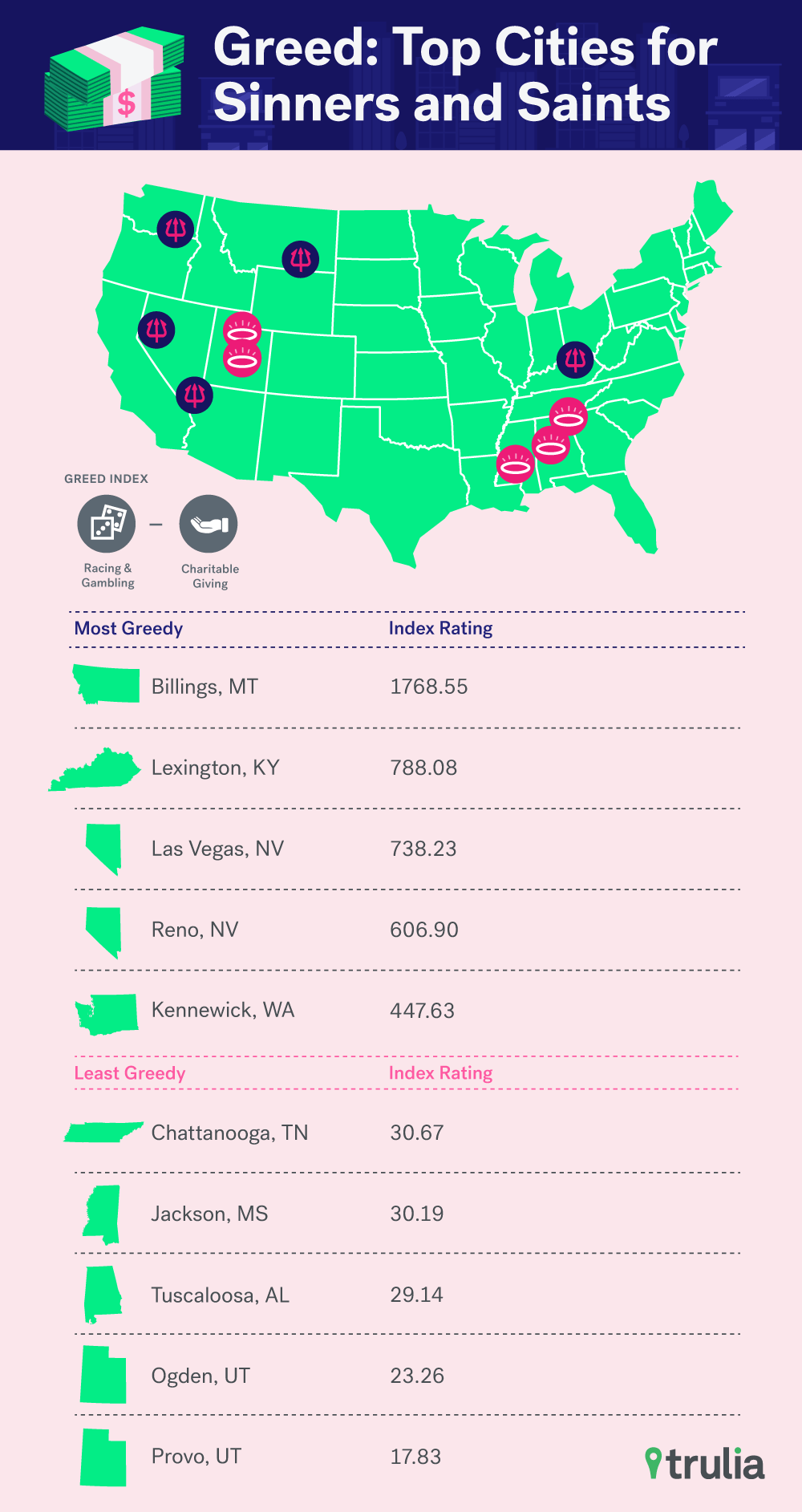 Methodology
In the creation of our Vice Index, we took a hedonic1 approach. We use the seven deadly sins, or cardinal sins, codified by Pope Gregory I in 590. The seven individual sin categories were first indexed and then ranked. The overall rankings were based off of the average rank of each the seven sin indexes per metro area. The seven individual sin category indexes are composed of the following inputs:

1 Hedonic – of, relating to, or characterized by pleasure