With the hottest year on record behind us, January and February a warm memory and Earth Day right around the corner, we decided to gauge American attitudes on being environmentally responsible at home. In an online survey conducted in March 2016 by Harris Poll on behalf of Trulia, we asked more than 2,000 Americans about what they thought were the best ways to live green.

The good news is that 79% of Americans agree that they consider themselves an environmentally conscious person, and only 6% strongly disagree with that statement. But as it turns out, it ain’t easy bein’ green. Only 26% of Americans say that they actually consider the environment in their daily actions beyond recycling and turning off the lights. Moreover, people have widely varying opinions on what’s the best way to reduce their home’s carbon footprint. When they do agree, it’s not always on the highest impact methods.

As we dug deeper into the national, political, and sociodemographic differences among U.S. adults, we found some interesting contrasts:

Curiously, what seem like easier, cheaper and higher impact actions like living in a smaller home (16%) and buying renewable electricity from a utility provider (10%) are not nearly as high on the list of ways to be environmentally responsible. Americans seem to agree: Buying energy efficient appliances for the home is among the best ways to be environmentally responsible, more so than living in smaller homes. 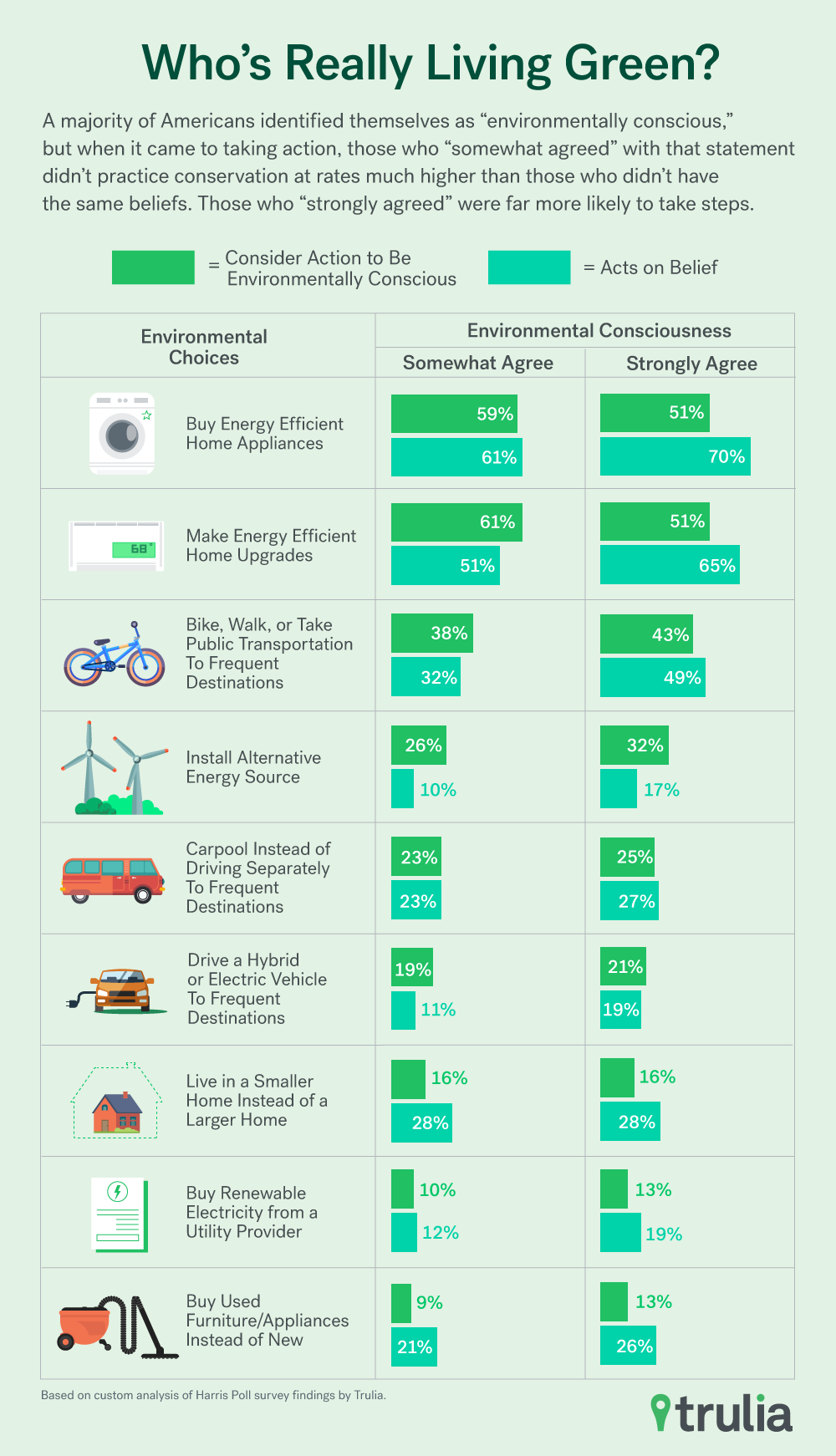 However, Democrats tend to actually act environmentally responsible at a higher rates than Republicans. So while 62% of Republicans say making energy efficient upgrades to the home is one of the best ways for someone to be environmentally responsible, only 53% actually do so. Democrats, conversely, do actually bike, walk or take public transportation at a higher rate than Republicans (42% vs. 26%, respectively) and are also more likely to drive hybrid or electric vehicles (15% vs. 10%, respectively).

Another contrast: Millennials are the most polarized age group when it comes to being environmentally conscious, with the highest proportion of respondents who strongly disagree (8%) versus strongly agree (24%). Millennials are also the only age group with significant differences between men and women. More Millennial men (32%), strongly agree that they are environmentally conscious, than millennial women (17%). Meanwhile, 29% of millennial women actually disagreed compared with 19% of millennial men.

But intentions aside, Boomers, aged 55 or older, actually take actions specifically based on environmental considerations, beyond recycling and turning off the lights, on a daily basis or more at a rate of 44% compared with 34% for the rest of the population.* Some of the environmentally responsible activities that they reported doing at higher rates than younger cohorts included buying energy efficient appliances (69% compared with 55% those younger than 55), and making energy efficient upgrades to their home (58% compared with 47% for those younger than 55), which require more of a monetary investment.* Meanwhile, 18-34 year olds chose more cost-effective green activities than their older counterparts, such as biking, walking or taking public transportation (47% compared with 31% for those 35+), and carpooling to frequent destinations (34% compared with 18% for those 35+).* 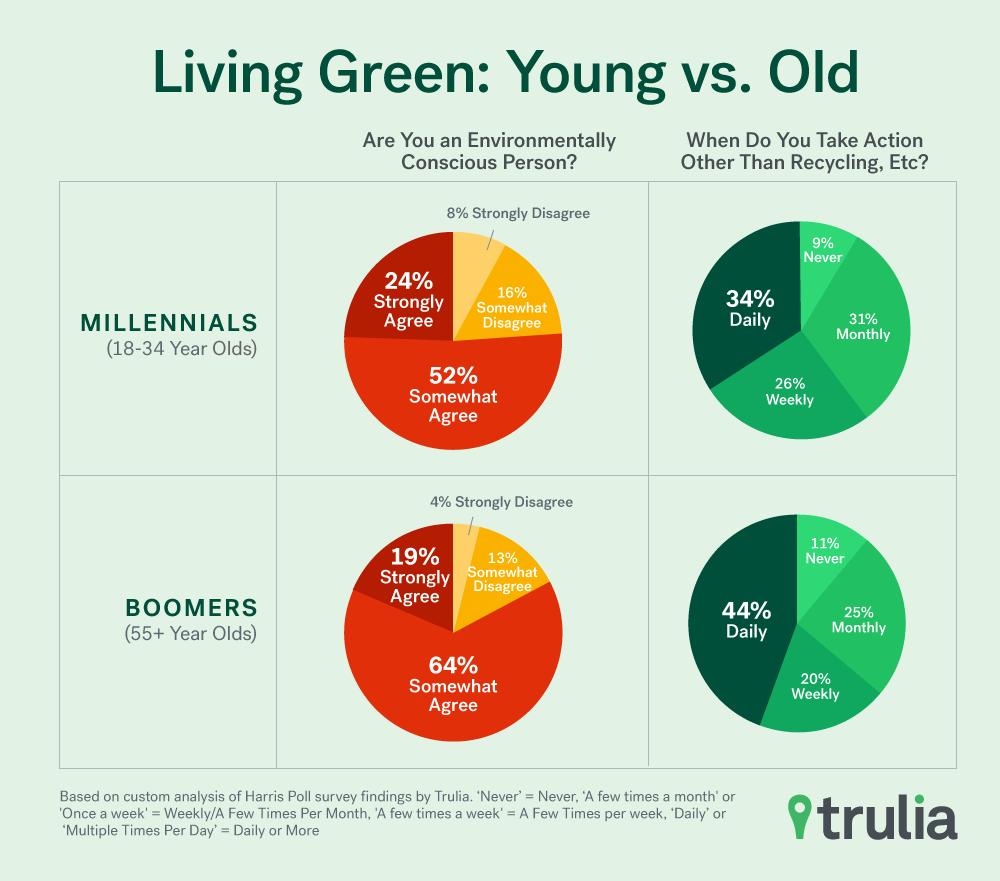 Aside from age, education also plays a big factor in living green. Americans with a college degree are more likely to say that they consider themselves environmentally conscious (84%) compared with those with a high school education or less (75%). Among this more educated group of Americans, more believe driving a hybrid or electric vehicle (22%) is among the best ways for someone to be environmentally responsible than their less educated peers who have a high school education or less (16%).

As education increases, so does household income and overall consumption.* Americans with a higher education tend live in larger homes and use more spaces for storage of stuff*, despite that being an environmental no-no. Larger homes require more raw materials to produce and more energy to maintain than smaller homes. Similarly, all that idle stuff being stored in dedicated rooms required raw materials and energy to produce and ship at one point. Even just among those who somewhat or strongly agree they are environmentally conscious, 40% with a college degree or more live in home larger than 2,000 square feet versus 21% of those with a high school education or less.* When asked where theye stored miscellaneous “stuff” (e.g., old clothes, old books, holiday decorations, second refrigerator or freezer), 67% of Americans with a high school education or less report having no more than two dedicated storage spaces in their home, versus 55% of those with more education.*

Based on the survey findings, we here at Trulia believe that most people want to do what is best for the environment, but there are clear time, convenience, and cost limitations that are also evident from responses. The degree to which these limitations push people away from a more green way of living is strongly affected by how they agree or disagree that they are environmentally conscious.* If changing minds on the environment is hard, then changing behavior is even harder. But ultimately, the answer to global environmental problems probably won’t come in the form high efficiency washers and TVs. Instead it will come more from collective changes in personal choices and behavior and improved efficiency. As it relates to housing, this involves careful consideration of where you live relative where you work, play and learn, how much space is enough and what you fill that space with.

*Based on custom analysis of survey findings by Trulia

This survey was conducted online within the United States between March 16th and 18th, 2016 among 2,015 adults (aged 18 and over) by Harris Poll on behalf of Trulia via its Quick Query omnibus product. Figures for age, sex, race/ethnicity, education, region and household income were weighted where necessary to bring them into line with their actual proportions in the population. Propensity score weighting was used to adjust for respondents’ propensity to be online.