The recent revelation that homeownership among American households at a 51-year low, has ignited a national discussion about the value of homeownership. It’s also having a fallout in the public policy arena: what’s causing the erosion of the “American Dream” is back as an issue in presidential politics.

One part of the puzzle: the effect of family influences on home buying. We examined more than four decades of data from the University of Michigan’s Panel Study of Income Dynamics (PSID) and found that in at least one way, kids actually do listen to their parents. Children raised on homes their parents owned, rather than rented, were nearly three-times as likely to buy a home themselves.

It’s also a trend that persists as those kids get older and make more money – there is an 79% chance someone who is 40, has a household income of $100,000 annually and grew up in a family-owned home themselves became homeowners, compared to a 56% chance for someone whose parents rented.

That’s a pretty strong correlation, which makes what’s happening to millennials worth noting. Compared with Gen-Xers, those aged 19 to 34, are less likely than people of other age groups to have grown up in a home owned by their parents. This suggests that, millennials could be less likely to own a home when they reach prime home-buying age even before considering student debt burdens and lower wages for those who hit the labor market during the recession.

To be sure, homeownership is not without financial risks and is not the only way to store and generate wealth, nor is it even the best. In a world of limitless ways to spend money though, homeownership has remained reliable means of forced savings, even during the tumultuous past decade.

In studying parental influence and homeownership, we also found:

Millennials and the Family Factor

Of all the independent adults in the survey 50.1% have received some kind of financial assistance from their parents and 8.6% have received help making a down payment in particular. With each year that goes by a person has higher chance of being married or divorced, starting their first real job or get a significant promotion, and all the while similarly, their chances of them having had parents help them make a down payment on a home at some point increases steadily. There is stark difference in those cumulative chances between those that grew up mostly in owned homes and those that did not though. Young millennials (18 through 24) in either group are not likely to have received help making a down payment yet. 2.8% of those from owned homes receive down payment assistance during this time while 1.5% of those from rented homes say the same.

Among older millennials though (25 through 34), the chances of those from owned homes receiving down payment help jumps up to 8.5% while those from rented homes barely moves at 2.2%. Lastly, among the older group in the study (35 through 45), 18.5% from owned homes report having received help making a down payment at some point since turning 18, while only 3.8% of those who spent most of their childhood in rented homes can say the same.

Just 50% of younger millennials in the study, ages 19 through 24, spent the majority of their childhood in owned homes. In comparison, older millennials, ages 25 through 34, and younger Gen Xers, ages 35 through 45, and grew up in mostly owned homes at rates of 56% and 59%, respectively. This downward trend could have a lingering cooling effect on future generations’ propensity to buy.

The census bureau recently released a preliminary national Q2 2016 ownership rate of 62.9%, the lowest level since 1965, and a continuing decline since 2005. In addition to this, younger millennials in particular are more likely to have been raised in renter households and, following the recession, parents are probably less able to help children purchase their first home than they were in the past. 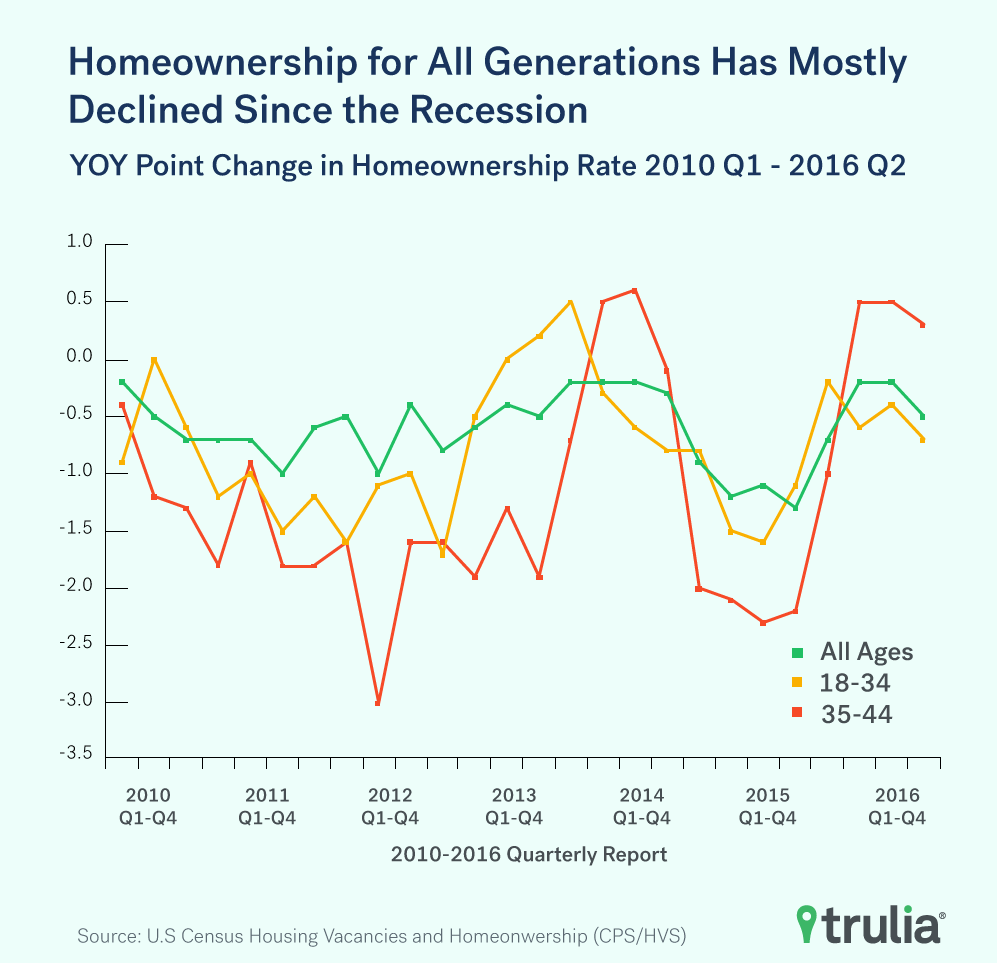 Until now, housing and homeownership haven’t been at the forefront of this year’s political cycle. But the vacancy survey has elicited a rise out of the Republican nominee for president, Donald Trump.

American homeownership rate in Q2 2016 was 62.9% – lowest rate in 51yrs. WE will bring back the ‘American Dream!’ pic.twitter.com/yI4Q8FHRjp

As for Hillary Clinton, the Democratic nominee issued a $25 billion housing plan that, among other proposals, would provide down payment assistance to middle- and lower-income households.

These considerations could be pointing to a new “normal” homeownership rate that is lower than we are used to seeing for some time to come. It is important to keep in mind that this is all unfolding amid a housing policy that already disproportionately helps the wealthy and non-minorities. If we are buying into the adage that “no one washes a rental car” and apply that to housing as a reason for incentivizing ownership, it seems like a good time to reexamine the effects those incentives have on savings and the role of homeownership as it relates to wealth accumulation and disparities.

The analysis for this report was done entirely with Panel Study of Income Dynamics (PSID) data. Using the 2013 Individual File and a 2013 mapping of individuals to their biological or adoptive parents (FIMS), all adults (ages 19 through 45) were mapped back to their families from 1968 through 2011. From there, it was determined how many years of responses were available for each individual’s childhood (age 0 to 18) and how many of those years were spent in owned homes vs rented homes. Data from the 2013 Rosters and Transfers survey was then added to determine who had received different kinds of financial help from their parents since turning 18.

The primary model used to measure the impact of parent’s ownership status on children as they move into adulthood was a logistic regression model that controlled for just age, income and the proportion of their childhood that the person spent in home(s) owned by their parents while they were growing up. The only respondents included in the model A) had a at least 6 years of responses available from when they were children, B) Claim to have lived with their parents for at least 16 years of their childhood, C) have moved on to become the head of their own household or are married to the head of a household, and D) reported that neither they themselves nor their spouse (when applicable) have received any financial support from their parents for school, a down payment on a home, or “Other Financial Help” since turning 18.

The proportion of people who receive financial assistance from their parents was calculated suing the same group as above, but without eliminating those who had receiving any financial support from parents. When looking at the proportion of adults who lived in owned homes during the majority of their childhood, the requirement of already having to have left home and started their own households was also lifted.