What tricks do sellers and their agents use when setting the price of a home? To find out, we looked at the asking prices of homes for sale on Trulia since October 2011, excluding foreclosures, to see whether certain numbers show up in home prices more than others. We found that some numbers are a lot more popular than others, and different lucky numbers turn up in home prices in different regions of country.

Of course, lucky numbers aren’t the only factor sellers and their agents use in setting asking prices. A seller who loves the number 54 isn’t going to price a home at $540,000 if it’s really worth $200,000. But they might work “54” somewhere into the price without straying too much from the home’s expected value, such as pricing at $200,540.

The number 9 shows up in a lot of everyday prices. A Ronco knife set costs $39.99, the featured product on Trader Joe’s website last week was roasted & mashed sweet potatoes for $2.49, and my 16-gig iPad mini is $329. Why do prices of goods so often end in 9? One theory is that people rarely have exact change when a price ends in 9, and in a traditional retail store the cashier needs to open the register to make change, and therefore can’t cheat the storeowner by pocketing the cash and not recording the sale. Of course, that’s irrelevant in a world of credit cards, debit cards, and online shopping, so another reason prices end in 9 is perception: those Ronco knives sound like a much better deal at $39.99 than at $40 because the price is in the $30 range, rather than in the $40 range. 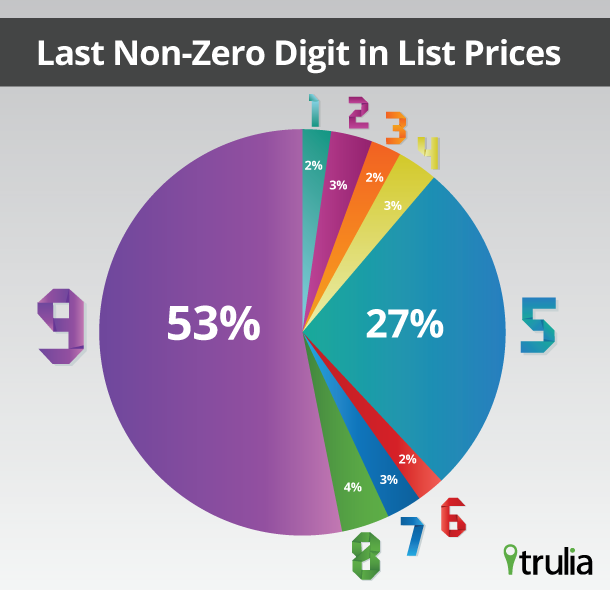 Do sellers use 9’s to make asking prices seem cheaper? We put on our data-miner hardhats and dug a little deeper to find out. It looks like the answer is yes, for a couple of reasons:

Since lower-cost homes and reduced-price homes are more likely to have 9 in the price, it seems sellers or their agents use 9’s to signal a good deal.

Here’s a puzzle: 9 is the last non-zero digit in more than two thirds of listings in upstate New York (Buffalo, Rochester, Syracuse) and several New England metros (Boston, Hartford, Worcester, MA), but in less than one third of listings in El Paso, Omaha, Tacoma, Seattle, and Honolulu. Why would sellers in upstate New York and New England think 9 is the right pricing strategy so much more than sellers elsewhere? We’re stumped.

Lucky Numbers Across the USA

Pricing with 9’s is a strategic move to make homes (or Ronco knives) seem like a better bargain. But what about lucky 7, unlucky 13, and other numbers with special meaning? Let’s spin through the digits: 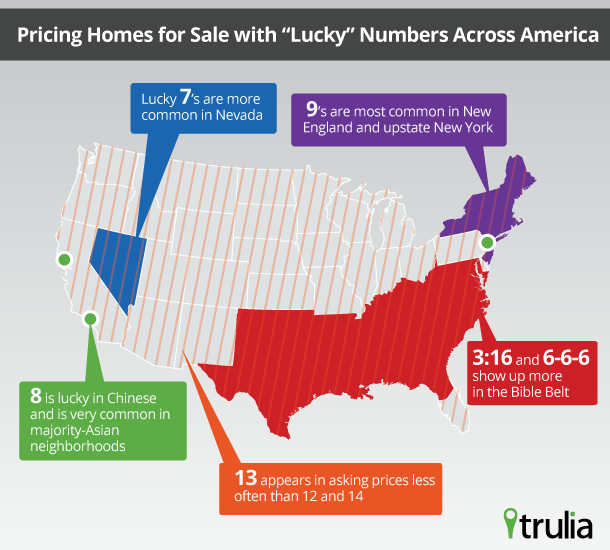 Setting the right asking price for your home isn’t all science and it isn’t just an art: sellers and their agents pick numbers to signal their strategy, and to appeal to the traditions and superstitions of local buyers. Housing is local, and so are lucky numbers in home prices. And that’s just one more reason to know the market when you’re selling your home.

(To recap, check out this infographic outlining all the findings below.)