As the U.S. unemployment rate edges lower, more Americans are getting back to work and it’s taking them longer to get to work.

Since 2009, commute times nationwide have been on the rise. Some of this increase is due to more people commuting, but also some may be due to a shift in where people live.

Between 2006 and 2014 the percentage of Americans renting has jumped 5 percentage points to 43.3% from 38.5% as a result of switching from homeownership to renting. As such, we wanted to explore whether the big shift towards renting over the past 10 years has led to shifts in commuting.

We found renters are far more likely to live closer to work, take public transportation and have shorter commute times than their home-owning counterparts.

In fact, renters have shorter commutes in 43 of 50 major metros, spending an average of one-and-a-half minutes less a day commuting than homeowners in those cities. While this may seem small, it adds up to more than a full 8-hour workday, 8.7 hours, that the average renter saves in annual time commuting compared to an average homeowner.

Our analysis of the Census’ 2014 American Community Survey data regarding commuting habits and an online survey conducted in November 2015 by Harris Poll among more than 2,000 Americans found:

In 43 of the 50 major metros studied, renters had shorter commute times than homeowners, though commute times for both groups have been rising annually since 2009.

What happened? The 2008 financial crisis caused a sharp spike in unemployment, which explains the sudden dip in commute times from 2008 to 2009. 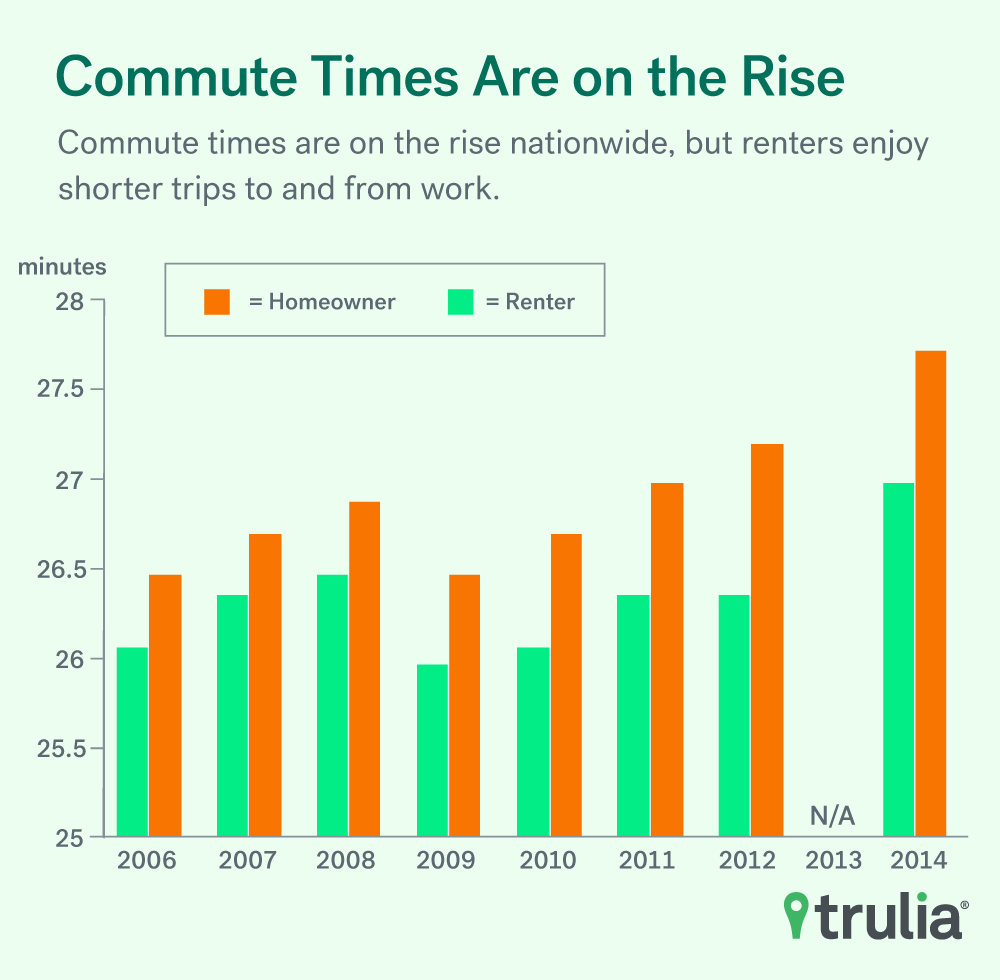 Note: 2013 was excluded due to lack of U.S. Census American Community Survey data. Data from the top 50 metro areas were used to conduct this analysis.

How Important is Living Close to Work?
With commute times getting longer each year, it’s no surprise that most people would like to live closer to work. When asked about their neighborhood preferences, 15.9% of working Americans picked either a “short commute to work” or “nearby public transportation” as the most important quality for their next neighborhood they would call home. 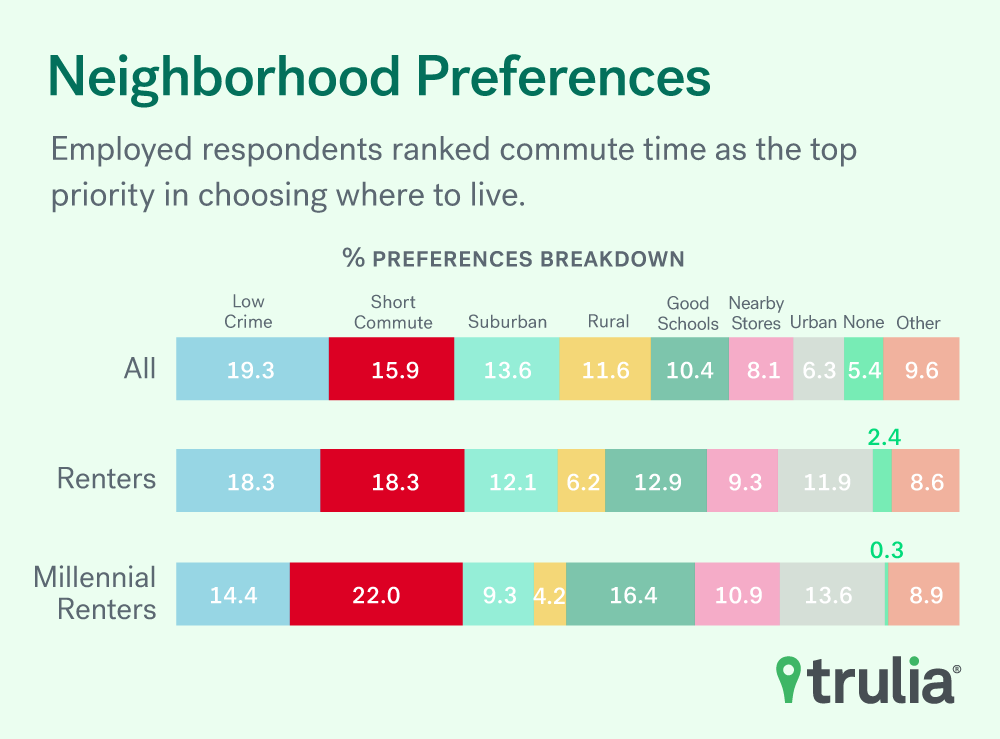 Living close to work was especially important to millennial renters. In fact, 18-34 year olds ranked having a “short commute to work” or “nearby public transportation” as being more important (22.0%) than living in a neighborhood with a low crime rate (14.4%)

The Best Cities For Renters And Homeowners To Commute

Los Angeles, which gets a bad rap for having the worst traffic congestions on the West Coast, has much shorter reported commute times 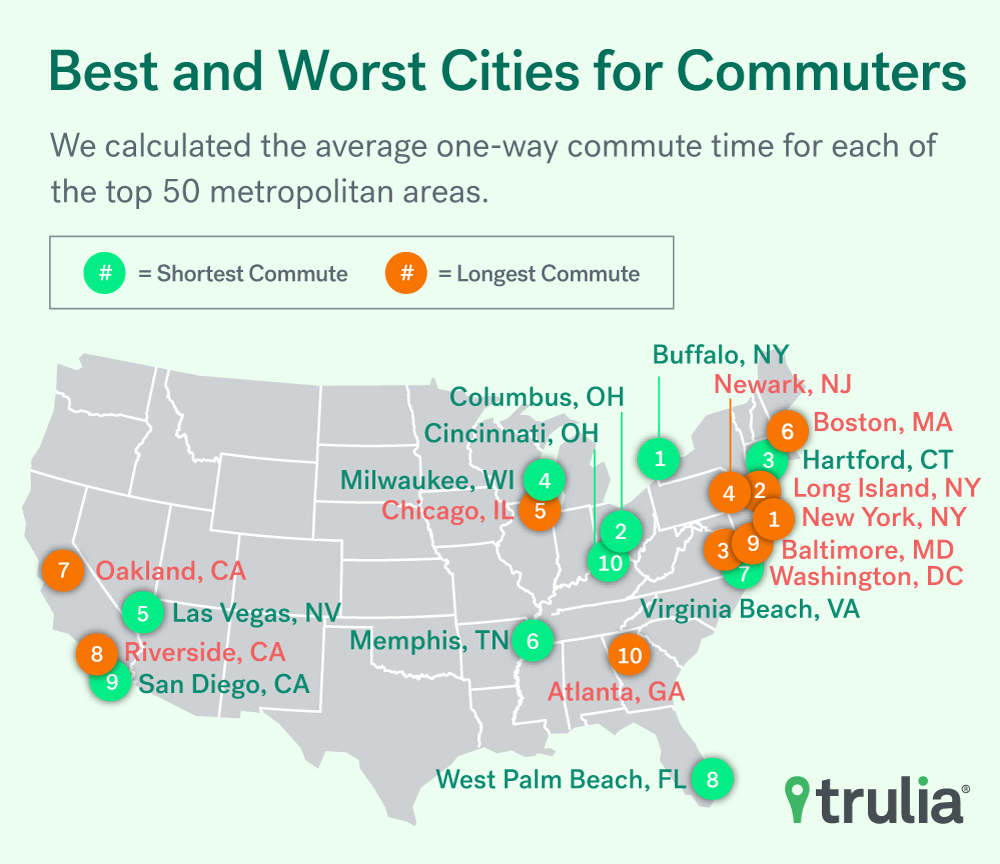 Meanwhile, smaller metros such as Buffalo; Columbus, Ohio, and Memphis, Tenn., had the shortest commute times, as these metros have less population density and road congestion.

For a sortable table of metros with commute times click here.

In 43 out of the 50 major metros studied, renters are beating homeowners in commute time by about one and half minutes. The metro areas where renters spend a shorter amount of time on the road versus homeowners were Riverside-San Bernardino, Calif., Houston; Long Island, N.Y., Austin, Texas, Newark, N.J, Cambridge, Mass., Washington, D.C.; Dallas, Columbus, Ohio, and Memphis, Tenn. But in some metro areas, such as New York, Orlando, Fla., and Detroit, renters do not have much of an advantage or even have a disadvantage.

Three Kids? Faster Commutes
Renters and homeowners, on average, tend to be different demographically. Homeowners are more likely to be older, have children, and live in larger homes. So to do an apples-to-apples comparison of commute times between renters and homeowners, we controlled for the home size and family sizes to see if there really was a difference after taking these factors into account.

First, we controlled for the number of bedrooms in the household, and found that even then, renters had a shorter average commute time than homeowners did in 2014, as shown below. 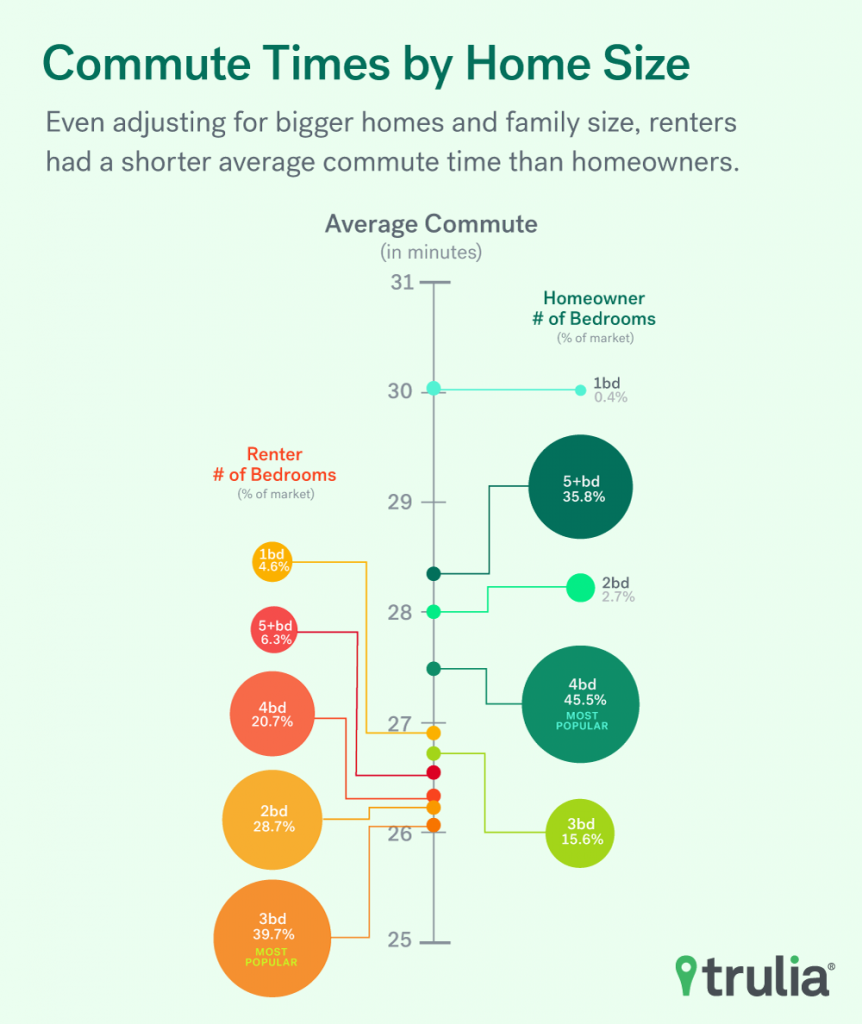 Even when considering the size of households, renters still beat homeowners.

The results when controlling for the number of children in a household is surprising. If you had three kids or more, conventional logic suggests that you’d want to live in the suburbs (which tends to have longer commute times than city centers) where there are typically better schools, less pollution and crime, and bigger homes – regardless if you were renting or buying. The results seem to indicate otherwise. These large-household-renters may put a very high value on having a short commute, because after all, time spent in the car is time spent away from their family.

For a sortable table of commutes based on household and house size, click here.

Trulia’s U.S. population survey was conducted online by Harris Poll on behalf of Trulia from November 19-23, 2015 among 2,016 adults ages 18 and older. The online survey is not based on probability sample and therefore no estimate of theoretical sampling error can be calculated. For complete survey methodology, including weighting variables, please contact pr@trulia.com

Survey data was filtered so that only those with full- or part-time jobs were included. In addition, data on millennials included only those who are current renters as of the survey date or those who responded as willing to move into a rental home within the next 12 months as of the survey date. Survey data came with weights for each observation so as to enable us to accurately represent characteristics of the U.S. population.