Ask any renter in New York City and San Francisco and they’ll tell you that the rents are too damn high. Sadly, they aren’t exaggerating. The median rent for both cities now exceed $3,000 a month — higher than any other rental market in the country. To put that into perspective, you’d need to make well over $120,000 to afford the median rent.

So what’s a renter to do? Well, some renters believe that their best bet is to find a rent-controlled apartment. Unfortunately, this doesn’t mean what most people think this means. Despite what you may have heard, a rent controlled apartment does not prevent a landlord from raising rents. Instead it just “controls” how much landlords can raise rents over the course of a renter’s tenancy in an apartment.

Not All Rent Increase Regulations Are Created Equal

Rent controls are local housing policies that differ from city to city, if they even exist at all. In New York City, there are two types of rent increase restrictions: (1) Rent-stabilization and (2) Rent-control.

For a unit to qualify as rent-stabilized, the rental must be:

Meanwhile, a rent-controlled unit must:

Here’s where it can get complicated: When a rent-controlled tenant moves out, that apartment ceases to be rent-controlled. If the building it’s in has more than six units, the apartment becomes rent-stabilized. Conversely, if it has less than six units, it becomes deregulated — which means future rents will be determined by the free market and the next tenant will likely be in for some serious sticker shock.

There are two exceptions for both rent-stabilized and rent-controlled apartments that may deregulate that unit. First, if the legal rent exceeded $2,700. Or, if the building was converted into a co-op after the current tenant moves out.

Now for the burning question —how much can landlords increase rents in rent-stabilized and rent-controlled apartments? Well, for rent-stabilized units, rent increases are determined by an annual vote among the city’s nine member Rent Guidelines Board. This year, the Board made an unprecedented decision to freeze rents on one-year leases starting between Oct 1, 2015 and Sept 30, 2016, meaning, rent increases are not allowed. This is the first time in the board’s 46-year history to approve a rent freeze. But for 2-year renewal leases beginning between Oct 1, 2015 and Sept 30, 2016, a 2% increase is allowed.

In rent-controlled units, on the other hand, landlords are entitled to raise rents up to 7.5% each year until they have reached the maximum base rent. Rent increases can only happen under the condition that landlords have certified they are providing an essential service (e.g., heat, hot and cold water, maintenance, painting and janitorial services, elevator service, etc.) and have removed housing code violations (e.g., lack of heat and hot water, mold, pests, etc.). That said, maximum base rents are specific to each property.

By contrast, the rent control rules in San Francisco are a bit more black and white. Under the Rent Ordinance of 1979, only rentals that were issued a certificate of occupancy (i.e., the building is up to code and fit for habitation) before June 13, 1979 are rent-controlled. But if the paperwork for a building was issued after this date, landlords can raise rents however much they please, whenever they want. However, there are several types of housing that are not protected by rent control laws:

Let’s cut to the chase, again—how much can landlords increase rents in rent-controlled apartments? In San Francisco, there are very specific rules. First, landlords can only increase rents by 60% of the increase in the Bay Area Consumer Price Index. Currently, this is equivalent to a 1.9% annual increase, effective March 1, 2015 through February 29, 2016. Moreover, landlords cannot increase rents until the tenant has lived in the property for a full year, nor can they increase the rent sooner than 12 months from the last increase.

Want a Rent Stabilized Apartment in Manhattan? Move to Inwood.

Knowing the difference between rent control and rent stabilization in New York City, it is clear that getting a rent-controlled apartment as a new renter is pretty much impossible. But this isn’t the case for a rent-stabilized apartment. So, where can you find this unicorn of a rental home?

To figure out which Manhattan neighborhoods have the most rent-controlled apartments, we looked at a combination of the 2012 Assessor’s database and Trulia’s rental listings from the past two years, and estimated the percentage of multi-family rental units that are under rent stabilization for each neighborhood in the Manhattan borough of New York City.

To calculate this percentage, we looked at whether or not a given multi-family home on Trulia was (1) listed with a monthly rent that was less than $2,700 and (2) belonged to a building constructed before 1974 with six or more units. We then ranked the neighborhoods by this percentage. Neighborhoods with less than 100 rentals on the market were excluded from the rankings. This is clearly a very rough approximation. There are various exceptions to New York City’s rent-stabilization rules; therefore, not all units that belong to a pre-1974 building with six or more units and rents for less than $2,700 classify as a rent-stabilized rental. 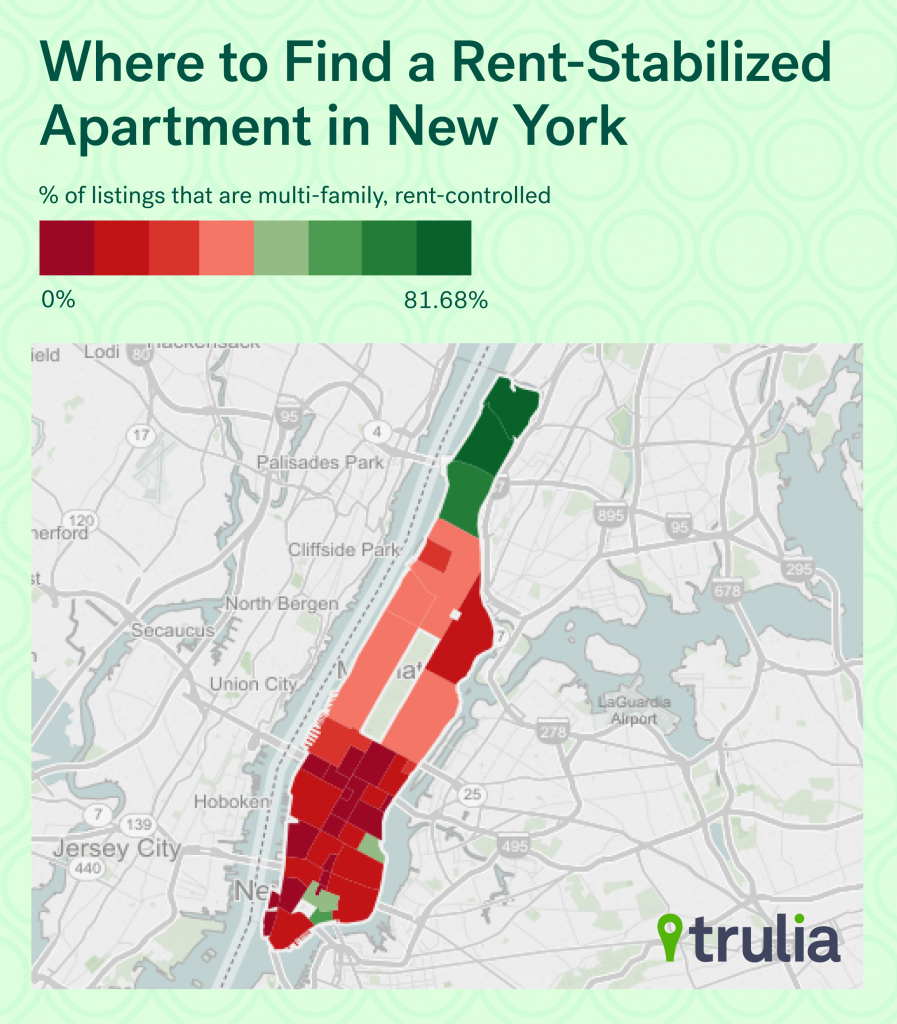 As you can see from the map above, less expensive neighborhoods such as Inwood, Harlem, and Washington Heights have a higher percentage of rent-stabilized units. This is primarily because these cheaper neighborhoods have more units that would rent for less than the $2,700 threshold (remember: units that rent for more than $2,700 become deregulated). These days, finding units that rent for under $2,700 are rare in expensive neighborhoods such as TriBeCa and the West Village, making it less likely for new renters to find rent-stabilized apartments.

Keep in mind that the figures above are based on Trulia rentals listings from the past two years. Therefore, our analysis does not capture units that have been occupied for longer than two years. Some of these units might still be rent-stabilized, and this limitation might have the greatest impact (i.e., the underestimation of the percentage of multifamily units for rent on Trulia that are rent-stabilized) on more expensive neighborhoods such as TriBeCa where residents may have lived in a rent-stabilized unit, whose rent is still below $2,700, for a long time.

Let’s now turn our attention to the San Francisco rental market, where most of the apartments are rent-controlled. Similar to what we did for Manhattan, we used the 2012 Assessor’s database to estimate the percentage of multifamily rental units that are under rent control for each neighborhood in San Francisco. This percentage calculation was based on the simple rule of whether or not a given multifamily building was built before 1979. We then ranked the neighborhoods by this percentage. Neighborhoods with less than 100 rentals on the market were excluded from the rankings. The screenshot of the table below hyperlinks to the actual tableau table. 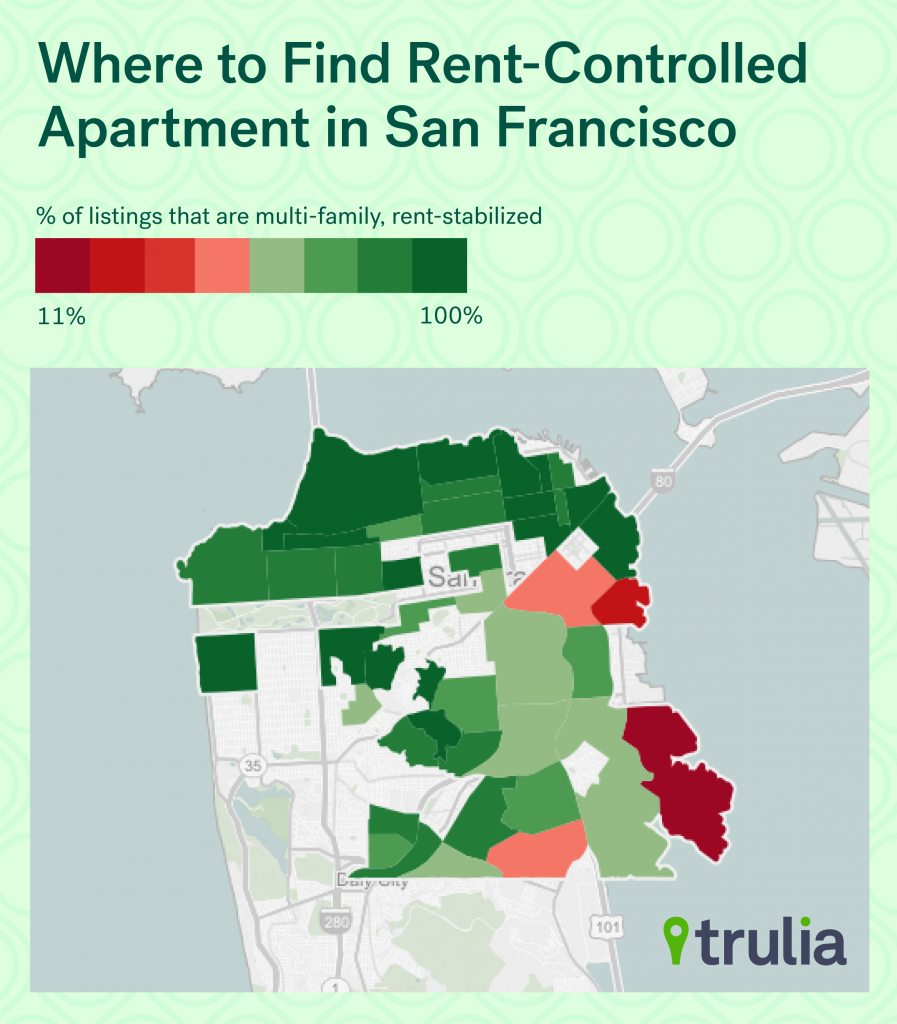 As you can see from the table and map above, 82% of multifamily units in San Francisco are under rent control. Older neighborhoods, such as Downtown, the Marina, Russian Hill, and Nob Hill which feature more historic buildings, rank higher on the list. On the flipside, SoMa and Mission Bay, where much of the newer luxury residential homes are being built right now, ranks lower. Meanwhile, Hunter’s Point, home to the city’s public housing projects which are exempted from rent control, ranks last.

Overall, what this analysis shows is that rent regulation is much stronger in San Francisco than it is in New York City. This is mainly due to the $2,700 rent threshold for New York City, where once a rental unit’s legal rent exceeds this amount, it becomes fully de-regulated. As a result, rent-stabilized units are difficult to come by, particularly in Manhattan, unless one considers apartments in neighborhoods that are less central and less expensive, such as Inwood or Harlem.

In San Francisco, however, upscale neighborhoods such as Pacific Heights and Nob Hill have plenty of rent-controlled units. But the one thing that readers should note is that rent control is not the same thing as having an affordable rent. We often hear about San Francisco rents being the highest in the nation, even higher than rents in Manhattan despite the widespread existence of rent-controlled units. That’s because San Francisco’s rent laws do not regulate the starting rent for a new tenant. So, let’s say a renter signed his lease in 1990 at $500 a month. When he moves out in 2015, a new tenant would start a new lease at the current market rent, which may be much higher than it was in the past. As a result, rent-control has essentially trapped some tenants in their current rentals because they don’t want to start a new lease at a higher rent — even if a new location and home size is better suited for their current life.