The latest Census data shows homeownership is still falling for young adults, and the National Association of Realtors (NAR) reports that the share of first-time home-buyers is slipping. While the housing market is clearly improving, with four of the five key indicators of the housing recovery from our Housing Barometer at least halfway back to normal, it looks like the recovery is happening even without much improvement in first-time homeownership. Does that mean the housing recovery isn’t for real?

Not so fast. The official homeownership rate published by the Census gives a misleading picture of homeownership trends. In fact, homeownership among young adults is both on the rise and not too far off from where demographics say it should be. To see this, we did two things in this analysis: (1) account for changes in household formation to get a true measure of homeownership, and (2) adjust for longer-term demographic shifts to compare homeownership levels today with pre-bubble levels.

But that doesn’t mean all’s well. There may be longer-term damage to homeownership from the recession – but to the middle-aged, not millennials. Homeownership among 35-54 year-olds is lower today than before the housing bubble, even after accounting for demographic shifts. Here’s why.

The published homeownership rate equals the share of households that own their home instead of rent. It does not, however, capture changes in whether people are dropping out of the housing market to live under someone else’s roof, like those millennials in their parents’ basement, who – in case you missed it – are for real. But if, say, people move out of their parents’ homes and into their own rental apartments, the published homeownership rate would still be falling even if the share of young adults who own remains the same.

Then, during the recovery, more young people started to form their own households, primarily as renters. The additional renters pushed the published homeownership rate for 18-34 year-olds down further in 2013 to its lowest level since our analysis begins in 1983: 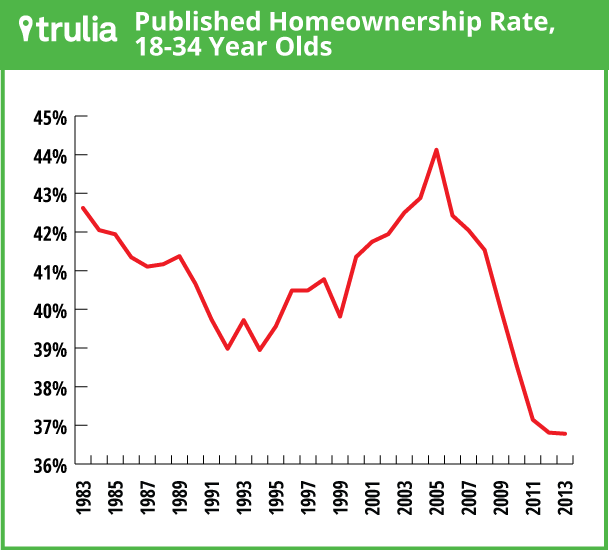 But our true homeownership rate, which takes household formation into account, turned up slightly in 2013. It’s still the second-lowest year historically, but the tide has turned. 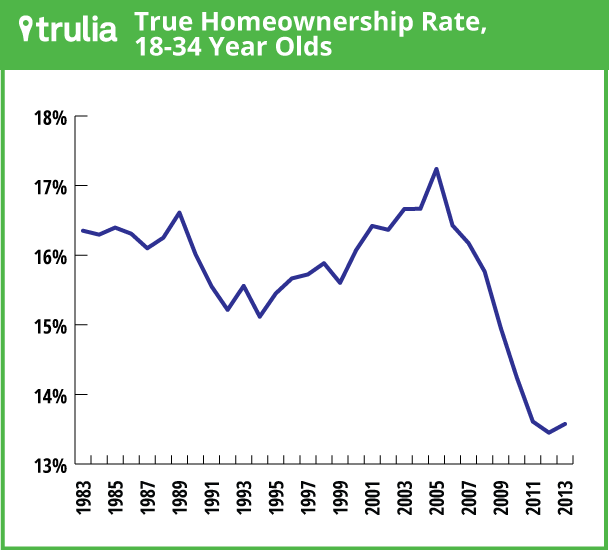 The true and published homeownership rates diverged in 2013 because the headship rate  – the share of young adults who head their own household – rose in 2013 back to the highest level since 2010. The headship rate is still low compared with during and before the bubble, but its recent increase must be taken into account in order to get the trend in homeownership right.

With our true homeownership rate, we can now determine how much of today’s low homeownership level among millennials is due to longer-term demographic shifts or due to the recent recession. The demographics of 18-34 year-olds have changed dramatically over the past 30 years, between 1983 and 2013, such as:

One way to quantify the total effect of these demographic factors on homeownership is to predict what might have happened to homeownership with these demographic shifts if none of the changes in behaviors or circumstances that evolved during the bubble, recession, and recovery took place. In other words, pick a baseline time period for a regression analysis – such as the years just before the bubble started (1994-1999) – and estimate what would have happened to homeownership if the likelihood of owning a home for someone with particular demographics in the baseline time period stayed constant and were applied to the actual demographic shifts that really happened (e.g., fewer people getting married, having kids, being non-Hispanic white; see note #3). This “demographic baseline” shows that demographics alone would have predicted a steady decline in the true homeownership rate over the past two decades, from 16.0% in 1994 to 13.1% in 2013 – a drop of 18%. 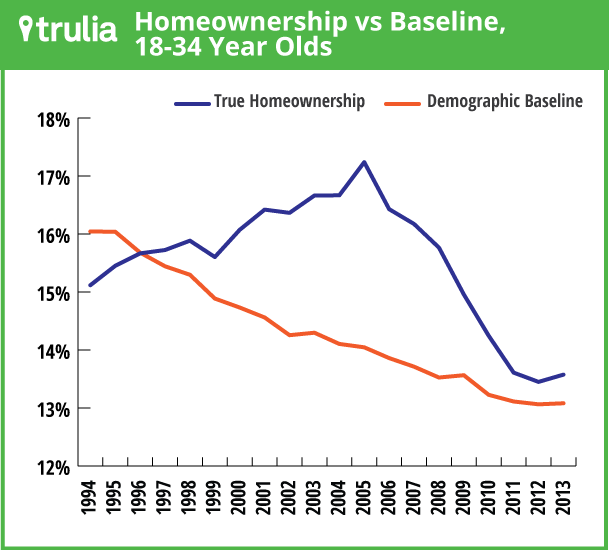 In short: although the share of young adults who actually own a home remains considerably lower today (even with the uptick in 2013) than at any time since 1983, it is roughly at late 1990s levels after taking demographic shifts into account. Unless those long-term demographic trends reverse, there might be little room for young-adult homeownership to increase. You’d have to ignore demographic trends that pre-date the bubble to believe that young-adult homeownership will eventually return to its unadjusted pre-bubble levels.

This also implies that there probably hasn’t been a huge shift in millennials’ attitudes toward homeownership, either, since today’s millennials are roughly as likely to own homes as people with similar demographics two decades ago (see note #5).

Worry Instead About Middle-Aged Homeownership 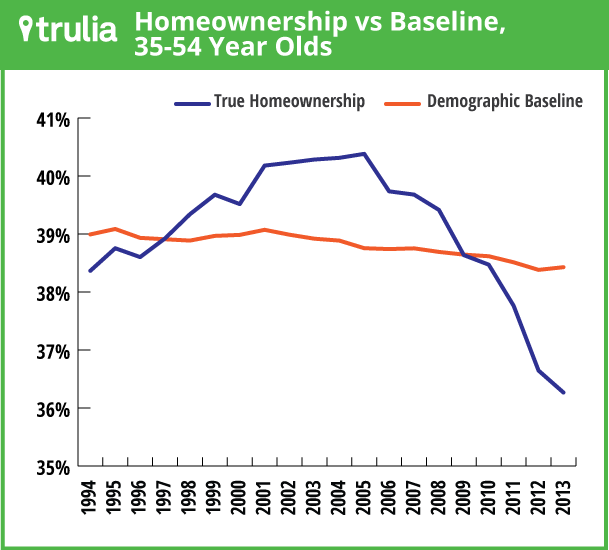 And that’s the point: the rise and fall of homeownership during the housing bubble and bust is about people who are middle-aged today. The millennial generation was still in their early 20s or younger in the mid-2000s – too young to have bought during the bubble and then to have suffered a foreclosure: Only the oldest among the 18-34 year-old group in 2013 would have been of home-buying age during the bubble.

Turning more millennials into homeowners, therefore, may not be the missing piece of the housing recovery after all. Long-term demographic changes mean that homeownership among young adults is roughly where it should be. The real missing homeowners are the middle-aged.