More than two-thirds of adults with children under 12 say that the neighborhood school district is among the most important considerations when choosing a home, according to a June 2013 Trulia survey. However, some parents factor schools into their housing choices differently. Nationally, 10% of school kids grades 1-12 attend private schools, and in some neighborhoods, the majority of kids go to private school.

In recognition of the back-to-school season, we analyzed where private school enrollment is high and low across the U.S. These geographic differences reveal why parents choose private or public schools for their kids.

Who Sends Their Kids to Private School 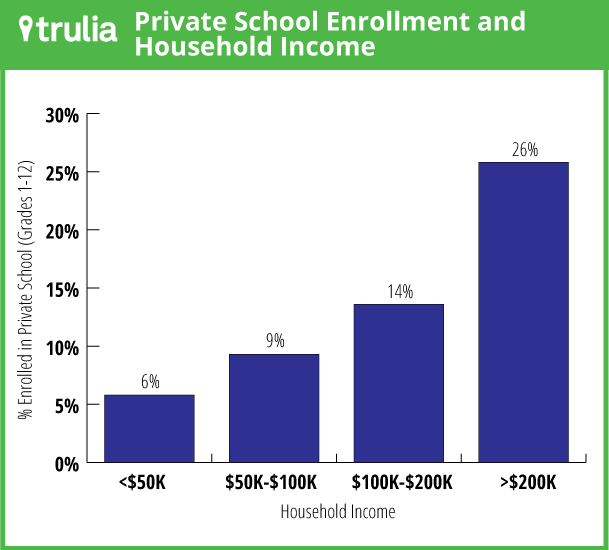 Since most private schools are religiously affiliated, shouldn’t religion matter as well? Sure enough, even after adjusting for income, education, race, and ethnicity, kids of Irish, Italian, or Polish ancestry—traditionally Catholic groups—are more likely to attend private school than kids of English, German, or Scandinavian ancestry (the Census does not ask about religion). Moreover, when we look at non-Census data on religious congregations, private school enrollment is significantly higher in counties that have a bigger share of Catholic, orthodox Jewish, or Amish congregants after adjusting for other demographic factors (most data in this post are from the Census; see note for data sources).

In short, kids are more likely to attend private school if their family is rich, highly educated, non-Hispanic White, Catholic, orthodox Jewish, or Amish. That makes private school attendance much more common in some places than others, as we’ll see next.

Where Private School Enrollment is Highest

The factors that influence whether kids go to private school vary across the country. As a result, private school enrollment is a lot higher in Louisiana, Hawaii and the Mid-Atlantic states than in the Southwest and Mountain states. 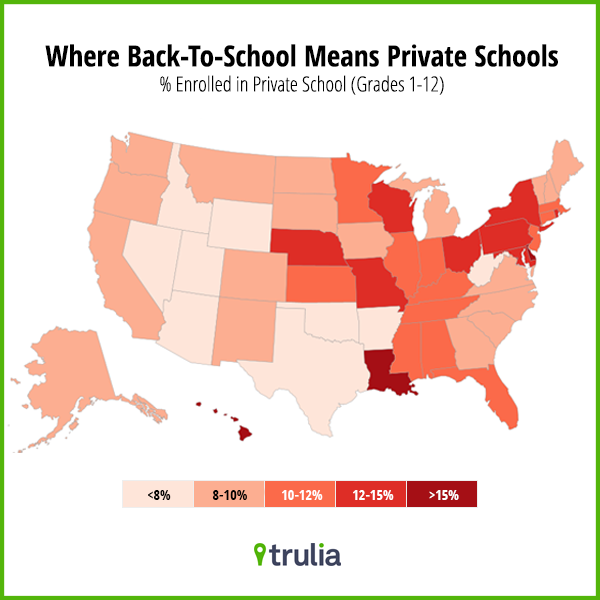 These differences are even more striking at the metro level. Among the 100 largest U.S. metros, private school enrollment tends to be highest in places that are richer, more educated, and more Catholic, though less Hispanic, than the national average. Among the top 10 metros for private school enrollment, income is particularly high in Honolulu, San Francisco, Philadelphia, and Wilmington. New Orleans, Philadelphia, and Cleveland also have a high share of Catholics. Finally, in all of these metros except San Francisco, the Hispanic population share is low.

Among smaller metros, two stand out for high private school enrollment: Lafayette, LA, and Lancaster, PA. Religion explains this. Lafayette has a large non-Hispanic, Catholic population, and Lancaster has the largest Amish population relative to its size among the largest 250 metros.

On the flip side, the 10 metros where private school enrollment is lowest are in the Southwest or West. All except Salt Lake City have large Hispanic populations—a reminder that private schools are popular among non-Hispanic Catholics, but not among Hispanic Catholics. Additionally, Fresno, El Paso, and Bakersfield are all relatively low income. 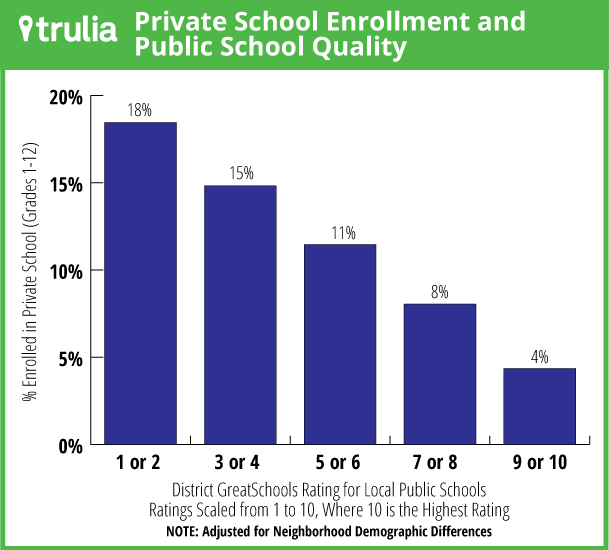 One final point: even after adjusting for neighborhood demographics and school quality (using both the GreatSchools rating and our “backpack-to-stroller” ratio, which suggests where parents move when their kids reach school age), private school enrollment is higher in neighborhoods with greater income inequality. It would take a lot more analysis to know what’s behind that. It’s possible though that private schools are a way for some parents to avoid public schools with greater income diversity. We’ll let someone else take up that delicate question.

Time To Do the Math: Do Private Schools or Great Public School Districts Cost More?

These 10 ZIP codes have something important in common: Housing costs are above the national average of $136 per square foot, except for ZIP code 77094 in Houston. In fact, homes in five of these 10 ZIP codes cost at least twice the national average. Neighborhoods with public schools that parents choose to send their kids to even though they could afford private schools just don’t come cheap.

So how should you weigh the high housing costs in great public school districts against the cost of private school tuition? The hard truth is that both can cost an arm and a leg. Looking first at public schools: Housing costs are much higher in better-rated school districts. In neighborhoods with average GreatSchools ratings of 1 or 2, the average asking price per square foot is 41% below the metro average. But in neighborhoods with ratings of 9 or 10, prices are 32% above the average. Them’s big differences. 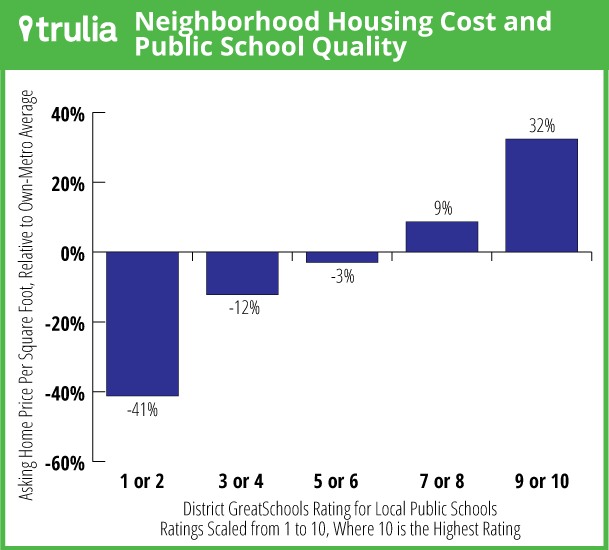 Now, for private schools. Tuition averages $10,940, which equals 12 monthly payments of $912. Let’s put this in a housing context: Our Rent vs Buy calculator shows that a $300,000 house has an effective monthly cost (taking everything into account, including down payment, closing costs, eventual sales proceeds, and opportunity cost—see our methodology for more detail) of $1,326 per month, under all the baseline assumptions. In that sense, private school costs two-thirds as much per month as a pricier-than-average house.

For anyone trying to make these tradeoffs, the math needs to get personal. The cost of private school depends on the actual school you’re considering—whether it’s a modestly priced Catholic school or Manhattan’s elite Dalton School, which has a $40,220 price tag. The cost of living in a higher-rated school district depends on how much house you want: a 32% premium for a GreatSchools rating of 9 or 10 implies more extra dollars for a mansion than a cottage. The cost tradeoff also depends on how many kids you’re putting through private school. Our quick-and-dirty math assumes tuition for one.

Details aside, the fundamental point is that either private schools or great public schools can drive the math of housing costs. And even if you’re not able to or interested in sending your child to private school, the level of private school enrollment among your neighbors might affect your kid’s public school experience.

Most of the data in this post come from the Census. Household- and individual-level data are based on the 2012 5-Year American Community Survey (ACS) Public Use Microdata Sample (PUMS). ZIP Code Tabulation Area (ZCTA), county, metro, and state data on private school enrollment and demographics come from the 2012 5-Year ACS and 2010 Decennial Census summary tables. “Income” refers to median family income of families with children. “Educational attainment” refers to the share of adults age 25-44 with a bachelor’s or graduate degree.

Home-price data are median asking prices per square foot among for-sale homes. The national figure is a weighted average of the ZIP code medians, weighted by total student enrollment.

The consumer survey question about the most important consideration when choosing a home was conducted online within the United States between June 24-26, 2013 among 2,029 adults (aged 18 and over), by Harris Interactive on behalf of Trulia via its Quick Query omnibus product. Figures for age, sex, race/ethnicity, education, region and household income were weighted where necessary to bring them into line with their actual proportions in the population.