School is (nearly) out for the summer. That means millions of newly-minted college graduates will strike out on their own to find a job and place to live. Here at Trulia, we’re experts in the latter, so we’ve set out to help new grads find areas where they can afford to rent and still have some money left over to pay back their student loans.

We measure graduate affordability as the share of rental homes on Trulia, as of May 7, 2015, that are within reach of an employed, college graduate between the ages of 22 and 25. Our standard is whether the total monthly payment, including rental payment and insurance, is less than 31% of the metro area’s median income for recent grads. We calculate affordability based on the local median graduate income and rents for the 25 largest rental markets in the US. Thus, what we consider affordable for a graduate varies from market to market.

For instance, in metro Atlanta, the median salary for a new grad is $25,571 per year. If you’re only making this much money, then you can only rent homes that cost less than $661 per month based on the 31% guideline. Sadly, this means just 8.7% of the homes for rent in Atlanta (those listed for less than $661) are within reach.

Generally, the picture isn’t pretty for recent grads who want to find an affordable place on their own. Those who head to the Midwest and Southern states can save the most on rent. But even in St. Louis, which tops the list of most affordable metros for new grads, just 18.6% of rental units are affordable. And it’s all downhill from there: with the next most affordable areas having less than 15% of affordable rental units. The good news is, you would need no more than one roommate to make the median rental unit affordable in each of five least expensive metros for grads. 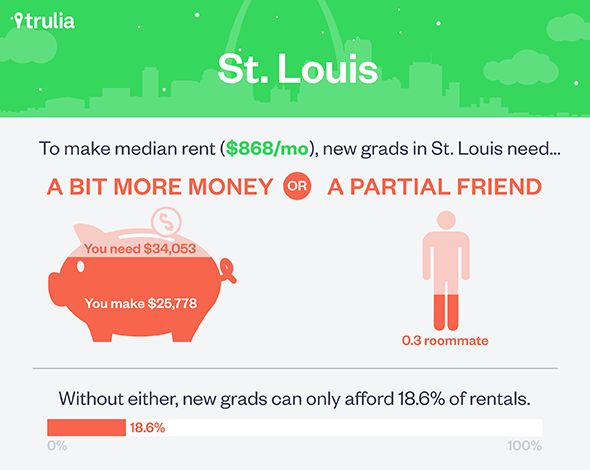 Go West Young Grad? Only If You Can Pay More

If you plan to head to the West Coast after graduation, then you might want to take a crash course in sticker shock.  Less than 1% of all rental units in the bottom five are affordable, and almost all are in expensive California markets. Portland, OR ranks the least affordable with 0.1% of units affordable, followed by Riverside-San Bernardino, CA (0.2%) Orange County, CA (0.2%), Miami, FL (0.4%) and, San Diego, CA (0.4%).

So what’s a grad to do? Although it’s an exciting prospect to get a place of your own right out of college, the cost of doing so may be large. For those not wanting to live with Mom and Dad, there are two options: spend time searching for the few affordable units that are out there (Trulia can help out with that!), or find roommates.

To help with the latter, we’ve crunched the numbers to find out how many roommates a recent grad would need to afford rent, and whether that means sharing a bedroom. In the five least affordable rental markets, a recent grad would need at least two roommates to make the median rental unit affordable, and in Riverside-San Bernardino, CA, that number jumps to three. In all of the five least affordable markets except Riverside-San Bernardino, CA, this means that two individuals would need to share a room, just like during freshman year! 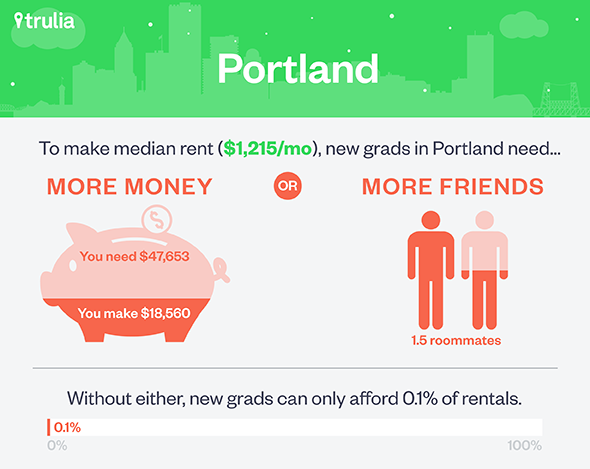 SF-DC-NY: How Much Do You Really Need To Earn To Rent?

Want to live like a young professional and not like a fresh-faced graduate? You might want to think twice about moving to a high-wage metro. For recent college graduates looking to live comfortably, moving to a metro where the young and educated earn the most might be a tempting offer. After all, in San Francisco, Washington, DC, and New York, the starting salaries for recent graduates aren’t too far off from salaries of more experienced workers in other metros. These areas also have high rates of employment. So why not pack up and move to The City by the Bay, The District, or The Big Apple? Two words: high rents.

Many of the metros that pay the highest salaries also come with hefty rental price tags. Here’s a look at how grad salaries stack up to the salaries needed to afford median rents. So take notice recent grads, bigger isn’t always better – ‘cause that big salary may not seem so big after you start writing out that monthly rent check. 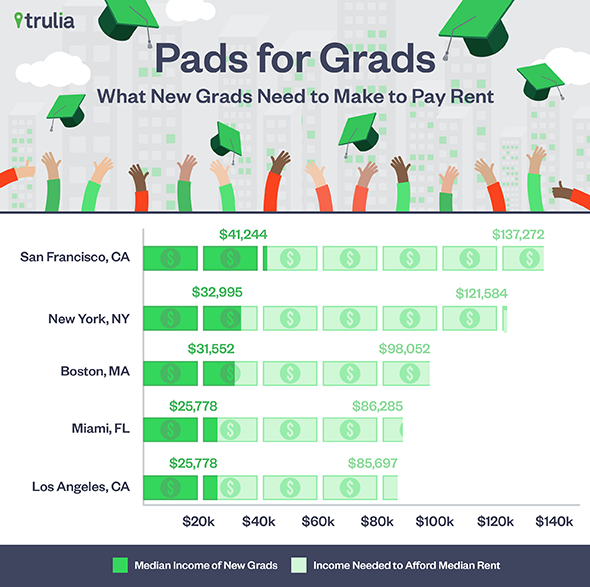 The Cliff’s Notes Of Rental Affordability

The lesson here for recent grads is that although it may be tempting to seek out metros with the highest wages, doing so may not necessarily lead to a better quality of life because these metros also have high rents.