It’s late August—and that means college towns across the country are coming back to life after sleepy summers. Students have registered, and they’re getting textbooks and moving into what they’ll be calling home for the next school year. For many, that will be a dorm room or some other on-campus housing option. Others will be striking out on their own or with a roommate in search of off-campus housing.

In addition to convenience, one of the advantages of on-campus housing is that students don’t have to pay rent between semesters. While some off-campus housing providers offer academic-year leases, most rental agreements are for a standard 12-month term. Given that, we wanted to know how prices for on-campus and off-campus housing stack up against each other if a full year’s worth of rent for off-campus housing were condensed into nine months to make the two comparable.

We combed through campus housing websites for the largest college or university in some of the 48 biggest college towns across the country, comparing what students pay for on-campus housing with what they would pay if they split a two-bedroom apartment with a roommate in the off-campus market. Here’s what we found: 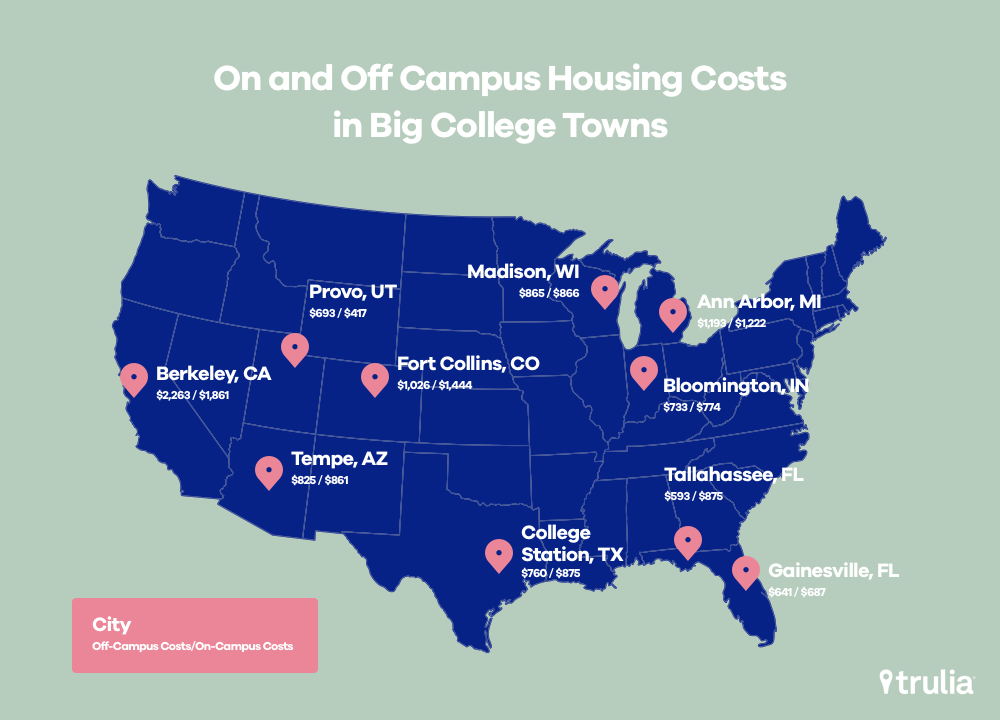 With some exceptions, living off campus with a roommate offers a cost advantage. But when that advantage is slender, it’s likely to melt away entirely after factoring in the cost of utilities, transportation to school and lost time.

For example, in Bloomington, Ind., on-campus housing at Indiana University will cost around $774 per month for the academic year, depending on the arrangement. This is $41 per month more than the 9-month cost of a 12-month lease split between two roommates. Diving in a little further though, the cheapest median off-campus rent can be found in the 47403 zip code—$659 per month per person condensed into nine months assuming two roommates share a two-bedroom, 12-month lease. That would save $115 per month compared with on-campus housing. However, utilities for a two-bedroom unit in this area are estimated to cost more than $200 per month, completely wiping out any savings. On top of that, most apartments in this zip code are not close to the university. Most off-campus students live in the 47408 or 47401 zip codes, which are generally closer, but where the median per-person cost before utilities is $876 and $787 per month respectively.

When cost differences are starker though, it becomes harder to justify the on-campus expense. Michigan State University advertises a per-semester rate of $5,136 in the undergraduate residence halls. For a nine-month academic year, that would shake out to $1,141 per month. By comparison, even in the more-expensive 48864 zip code adjacent to the university, the median estimated per-person rent is $911, after condensing the cost of a 12-month lease over nine months. If you were looking for a cheaper option in the Lansing and East Lansing area and didn’t mind living away from campus, the comparative rates in the 48915 and 48910 zip codes are $499 and $527 respectively.

In places where the math tips in favor of on-campus housing before considering other costs, it can be tricky to find an off-campus option for less, based on our assumptions. Among the places we looked, UC Berkeley students face the most expensive rents both on- and off-campus. Still, living on-campus for an estimated $1,861 per month is $402 cheaper than splitting a market-rate unit in the city of Berkeley. Students determined to live off campus can look three or four miles away from campus in the 94608 zip code where the median is $2,088 per month. To get anywhere near the on-campus rate, two roommates would have to look well outside of Berkeley and search 10 miles south to the 94621 zip code in Oakland or five miles north to El Cerrito’s 94530, where the medians are $1,696 and $1,875 respectively before utilities and transportation costs.

In picking our college towns, we looked at census-defined places with at least 45,000 people in the 2016 5-Year U.S. Census’ American Community Survey in which at least 20% of the population is identified as enrolled in college or graduate school. Estimates for on-campus housing costs were obtained directly from the websites of the largest college or university in each of these places and we excluded the cost of meals when possible. When not explicitly stated, the cost for a full nine-month academic year of on-campus housing was calculated either based on monthly or per-semester rates.

To compare on-campus housing costs with off-campus market rates, we took the median estimated 12-month rental cost of all two-bedroom units in a place. We split that between two roommates and divided it over nine months to match the academic year. For example, if the median rent of a two-bedroom unit were $600 per month spread out over nine months, the monthly cost would be $800 per month, which works out to $400 per month for each roommate.

We did this for both the cities where the colleges and universities in this analysis are situated as well as zip codes in the same areas.