As Dorothy once famously said while clicking her ruby red slippers, “there’s no place like home.” If there’s any truth to that statement, then why do people move away? Well, one of the top reasons is because of a house. According to the good old U.S. Census, more than 4 in 10 people moved between 2009 and 2010 for a real estate-related reason, such as upgrading to a bigger and better house. Beyond that, people also move for love (this includes getting married and breaking up) and work (we all got to bring home the bacon somehow, right?).

Given this, you would think that most people aren’t looking for a fresh start when they move, just a change of scenery. Surprisingly, that isn’t the case. When we dug into how far people want to move – by examining where people searching for a home on Trulia.com are today and where they’re looking to live tomorrow – we found that 2 out of 3 (59%) house hunters want to pack up and get out of dodge.

So now you’re probably wondering how far is “far” when people say they want to move far, far away? Well, check out this pie chart we made using the data from our study to find out (it is best viewed counter-clockwise). 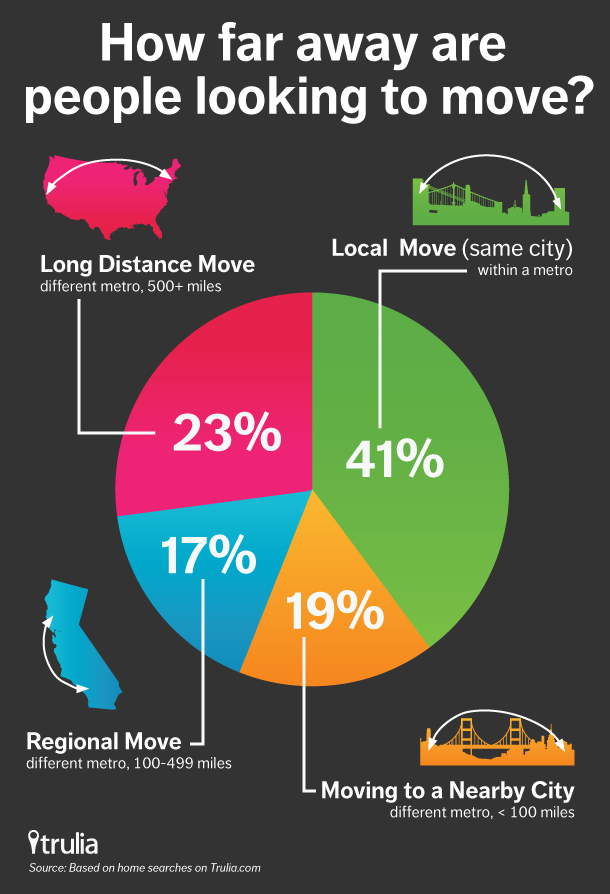 Slice #1: Long distance moves (more than 500 miles) make up 23% of all the searches, which means that nearly a fourth of all the house hunters out there are looking for a pretty drastic change…as in goodbye San Francisco and hello New York City!

Slice #2: Regional long distance moves (less than 500, more than 100) aren’t nearly as dramatic, but are still a pretty big change, which is what 17% of house hunters are looking to do. If you’re familiar with the difference between NorCal and SoCal, it’s all California but practically two different worlds…as different as Mark Zuckerburg and Kim Kardashian.

Slice #3: Moving to a nearby city (less than 100 miles, different metro) is kind of like a local move but not. Imagine living and working in San Francisco – you’re just a walk or bus ride away from pretty much everything you’ll ever need and want, but you have a very tiny living space (on average, homes go for about $522 per square foot). Should you then move away to the suburbs in Pleasanton (a town on the outskirts of the SF Bay Area) and keep your job in the city, you’ll likely have more house than you know what to do with (we’re talking about an average $317 per square foot) along with a draining commute and a can-not-go-anywhere-without-a-car way of life. Be it for a bigger house or something else, about 19% of house hunters are looking to make this kind of move.

Slice #4: On the flip side, 41% of house hunters are lifers (someone who voluntarily lives and dies in the same place that they were born) or at least they seem like they’re going to be.

Question to all our wonderful readers: how far away did you go the last time you moved? Tell us in the comments below!