Million-dollar homes remain relatively rare, but widespread and robust home value growth – the typical U.S. home appreciated 7.6 percent over the past year, with many markets experiencing double-digit growth – is helping to quickly swell the ranks. Increases in the share of million-dollar homes are largely concentrated in pricey coastal areas and in neighborhoods that have experienced rapid price appreciation. The San Francisco Bay Area and other West Coast metros, areas that already feature sky-high home values and rapid price appreciation, topped the list of places with the biggest jump in the share of $1 million homes. Long Island, N.Y., is the only metro not on the Pacific coast to crack the list of top-10 places with the largest increase.

Looking at the list above, it’s clear the Golden State more than lives up to its moniker. And given that so many homes there are worth $1 million-or-more, it should come as little surprise that California is also home to the largest number of million-dollar neighborhoods – those enclaves where half of all homes are worth at least a cool million bucks.

Of the nation’s 838 million-dollar-’hoods, 105 crossed the threshold in the past year alone. Among cities and towns analyzed with at least 10 large neighborhoods, eight of the top 10 with the largest jump in neighborhoods joining the $1 million club are (again…) in coastal California. Boulder, Colo., and Brookline, Mass., just outside of Boston, round out the top-10. In Boulder, 9.4% of neighborhoods — mostly on the west and north side of the city — crossed the $1 million threshold recently. Aspinwall Hill in Brookline was the one neighborhood of ten local areas analyzed that helped the Boston suburb make the list.

California communities are getting a lot of ink, but they aren’t all created equal. In the larger Oakland metro, 6.9% of larger neighborhoods (20 of its 290) crossed into $1 million territory over the past year. But that wasn’t driven by growth in the city of Oakland itself – a majority (11) of those 20 neighborhoods were in the city of Fremont, a few miles south of Oakland. Among metro areas where the number of $1 million neighborhoods is ticking upward, they tend to border neighborhoods that have crossed over recently. The million-dollar creep continues. 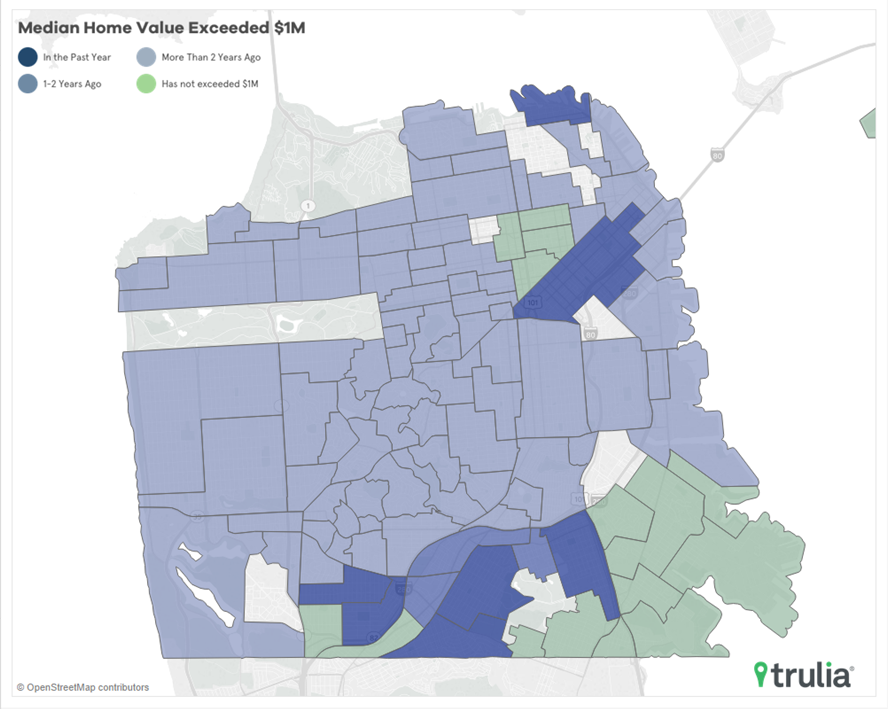 There are also several neighborhoods nationwide likely to join the ranks of million-dollar spots in the next year or two if trends continue to hold. These include neighborhoods like Birch Park Finger Streets in Fort Lauderdale, Stonegate in Renton (southeast of Seattle), and Cherokee Park in Sandy Springs, outside of Atlanta. These places all currently have median home values north of $900,000, and have appreciated more than 14 percent since last year.

To be considered in the analysis, a neighborhood needed to have at least 20 homes for which we had a home value estimate, as well as a price trend which didn’t seem to be beyond the realm of reasonable given metro and national trends. For discussions of cities, only cites with at least 10 neighborhoods in consideration were ranked and included in the analysis.