McMansions were the Big Macs of the housing market back in the early aughts: large, mass produced, delivered in a tight package (land), and looked the same regardless of where you bought one. They represented the biggest suburban housing movement since the first tract homes of Levittown, and have received criticism over the years from both design pundits as well as land use advocates. But have they fallen out of style? We set out with our good friend Patrick Clark at Bloomberg to investigate, and found that it really depends in which market a McMansion was made. Read Clark’s story. 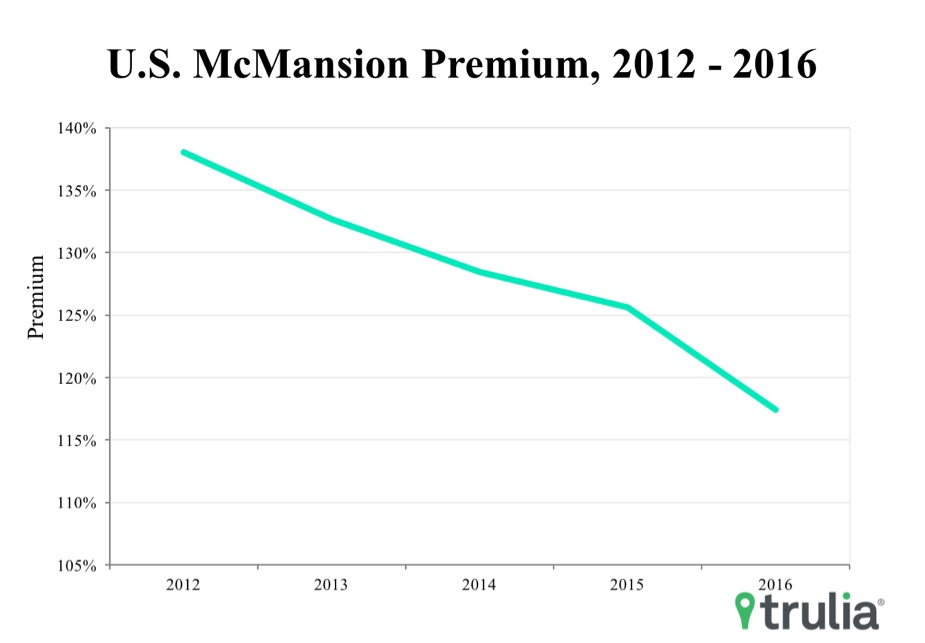 First, the details: we had to come up with a concrete definition for the somewhat subjective idea of a McMansion. There isn’t a precise way to define a McMansion, but we settled on any home build between 2001 and 2007 that was roughly 1.5 to 2.5 times larger than the median sized new home in 2000, which works out to about 3,000 – 5,000 square feet. To track how these homes have recovered to all others, we compared the median home value premium for McMansions at market bottom in 2012 to the premium today.

Nationally, we’ve found the premium has fallen for McMansions from 138% in 2012 to 117% this year. However, the premium varies substantially by market. McMansions have taken the biggest hit in Florida. Eight of the 10 markets where premiums have fallen the most are in the Sunshine State, and each of the top 5 are there. Cape Coral-Fort Myers leads the pack, where McMansions have seen an 84.5 percentage point drop in their premium between 2012 and 2014. Fort Lauderdale, Miami, and West Palm Beach, round out the top 5, where premiums have dropped by at least 70 points. What’s more, premiums have dropped in 85 of the largest 100 U.S. housing markets. Milwaukee and Winston-Salem, N.C., have seen the largest increase in premiums, but just be a meager 12.5 and 10.8 points, respectively.

Is this proof that McMansions are dying out? Not so much. While some homebuyers may certainly view them as an ugly, outdated relic of the housing bubble, there’s likely more fundamental factors at play. First, prices of the smaller and cheaper non-McMansion homes dropped more during the housing bust, but have made a stronger recovery than McMansions since market bottom. Second, homebuyers are willing to pay about 20% more for a new home compared to a used one, so at least some of the drop in these markets may due to the fact that these McMansions have lost their new newness.