However, those who have resided here longer not only have closed the gap, but by many measures have also surpassed other residents when it comes to acquiring the necessary financial stability required for homeownership.

President Trump identified Iran, Libya, Somalia, Sudan, Syria and Yemen in a revised executive order that temporarily banned travel to the United States from these six countries. A seventh, Iraq, was removed after being included in the original order signed in January. That order was blocked by the courts. Likewise, a federal judge blocked the new order on March 15 just hours before it was to go into effect. The Trump administration has vowed to appeal the ruling.

Those rates begin to fall precipitously against their immigrant peers for those who arrived in the states in the last five years ending 2016. 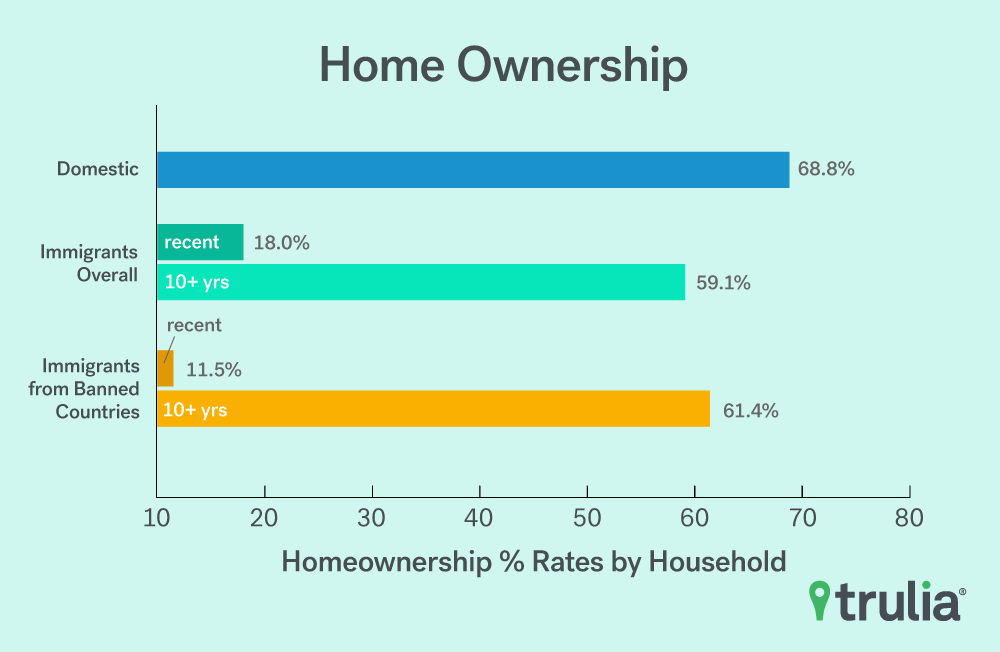 Immigrants from nations named in the executive order represent a tiny fraction of the overall foreign-born population in the U.S. and an even smaller fraction of the U.S. population overall –less than 700,000 of a nation of 321 million. The ‘travel-ban’ nation with the biggest U.S. population is Iran, with 394,223 residents; the smallest is most likely Libya, which the census groups with other North African nations in its surveys.

Iran leads in population, but the rate of immigration has steadied, increasing just 10.4% between 2010 and 2015. Contrast that increase with the immigration rate from Syria, up 38.3%, or about 23,000, during the same period – a trend not surprising given the refugee crisis created by that nation’s civil war. 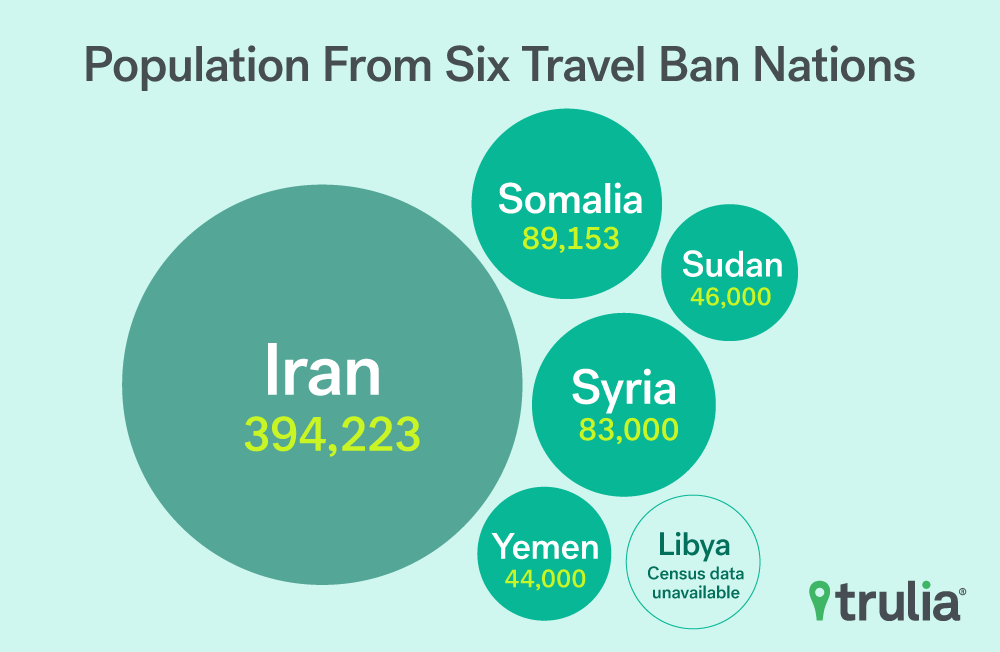 Immigrants from the ‘travel ban’ nations are scattered across the U.S. As a whole, the biggest population is in Los Angeles, followed by New York, Orange County, Minneapolis and then Washington D.C.

Immigrants from the six nations have a big advantage when it comes to one of the strongest determinants of homeownership: higher education. 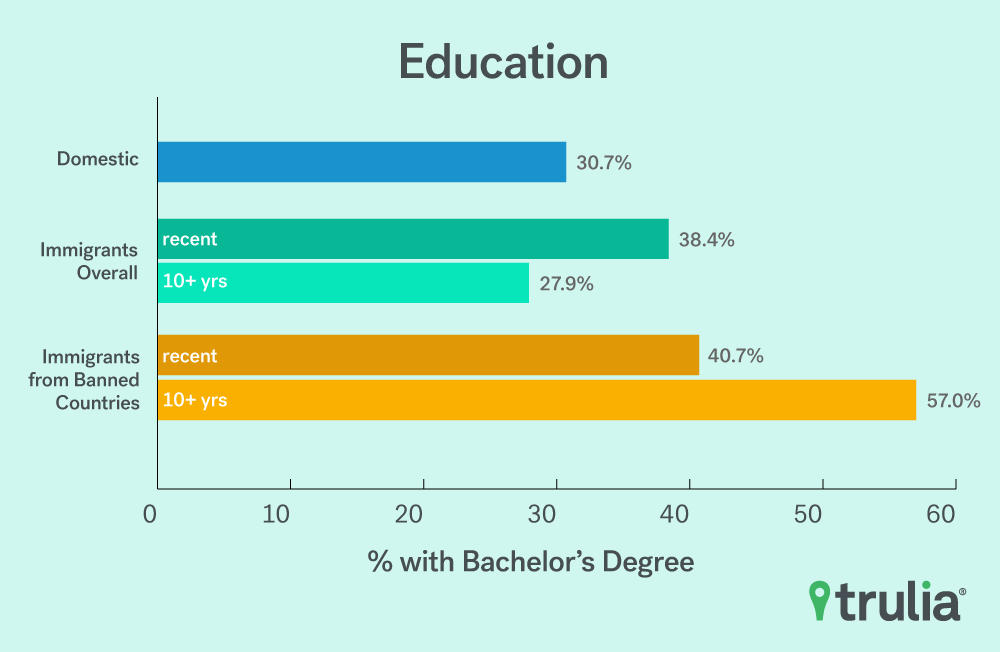 For households headed by recent arrivals from the six countries, the statistics are discouraging: the median income is $25,953 compared with $32,646 for all recent arrival households. Forty percent live below the poverty line, compared to just 9.5% of domestic born and 23% of immigrants from countries not named in the executive order.

Recent Immigrants Lag Others In Employment

Working-age people (25- to 55-years old) living in the United States who are originally from one of the six countries affected by the order also diverge in the types of types of jobs they take once here.

The most common jobs they hold are generally middle- to lower-income. They include first-line supervisors of sales workers, managers and retail sales. However, they hold these jobs at rates similar to their domestic-born counterparts.

Immigrants from these nations also are more often found in lower-wage jobs: driving taxis or working for car services (17.9 times the rate of domestic-born people). These extremes in professions are likely a consequence of the fact that new immigrants arrive with less education and have a long way to go before achieving the same level of success enjoyed by those who came before. 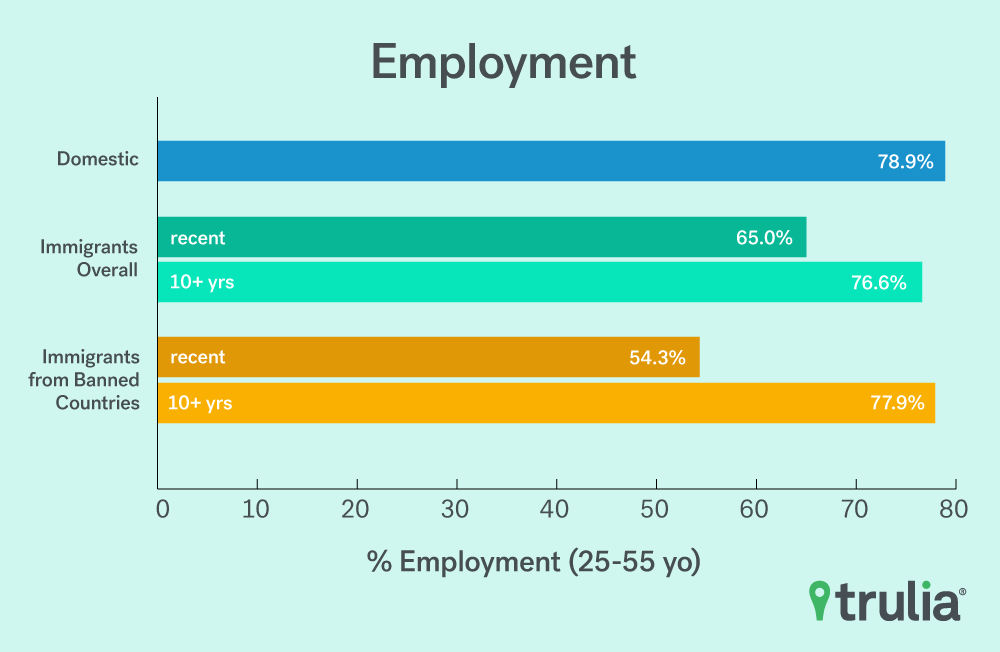 In conclusion, we found that compared to the immigrant population as a whole, whether immigrants from the six nations are thriving or struggling depends largely on how long they have lived in the United States. After 10 years, many are financially stable enough to become homeowners in their adopted country.

Microdata from the CPS surveys going back to 1994 (when they began asking for country of origin from each respondent) was used to quantify ownership rates, education levels, household income, and occupations for all respondents. For occupation and education levels, only people between the ages of 25 and 55 were used (prime working age years). For household-level data such as ownership rate and household income, all household head responses were used.
Sarah Flood, Miriam King, Steven Ruggles, and J. Robert Warren. Integrated Public Use Microdata Series, Current Population Survey: Version 4.0 [dataset]. Minneapolis, MN: University of Minnesota, 2015.
http://doi.org/10.18128/D030.V4.0.