America’s biggest housing markets are becoming more economically diverse neighborhood by neighborhood, a trend that’s not only an opportunity for potential buyers to break in but making those communities less homogenous.

But it’s not all necessarily good news. In most markets, the most affordable housing is disappearing.

Trulia studied home values as well as rental and owner-occupied[1] housing across the nation’s biggest metros. We found that during the last five years, expensive neighborhoods were still expensive when it came to affordability, but more moderately priced neighborhoods are on the rise.

And, as part of our analysis, we noticed there’s a strong relationship between the unevenness of housing values across metros and the racial and income segregation within a metro.

That said, not every metro is seeing a widening gap. Some places – Phoenix and San Diego, for instance – saw the economic divide shrink. That means homebuyers and renters can find a mix of luxury and entry-level housing across those cities’ neighborhoods.

Why is this important? Identifying the economic disparities could be useful to those in charge of housing policy when it comes to persistent economic and racial segregation. For instance, local government could incentivize low-income housing programs in neighborhoods where lower-priced homes are disappearing.

To gauge the unevenness of housing values in a market we created an index that measures the share of neighborhoods[2] that contain housing in the lowest and highest tiers compared to the median price of a home in that metro.

[1] We define owner-occupied housing to also include for sale or sold but not occupied homes.

[2] Neighborhoods are proxies for census tracts in this analysis.

[1] Metrics for the 100 largest metros are calculated as an average across all of these metros, weighted by the number of occupied housing units.

The 5-year shift in home value segregation shows how much neighborhood home values can change. Since 2010 the U.S. housing market has been in a state of recovery after being hit with mass foreclosures, driving many neighborhoods to lose considerable value. Almost no change in the imbalance of rental and owner-occupied housing, however, reflects the relative immutability of rental and ownership opportunities, which only change only when significant amounts of construction occurs or when residences are converted into rental properties.

It turns out that the metros that saw the largest increases in home value segregation mostly saw the proportion of the inexpensive neighborhoods increase, except for New York, Allentown, Pa., and Boston. In other words, metros with the largest increases in home value segregation actually saw the gap between the most and least expensive homes grow at the bottom end of the market. In other words, the share of least-expensive neighborhoods grew. 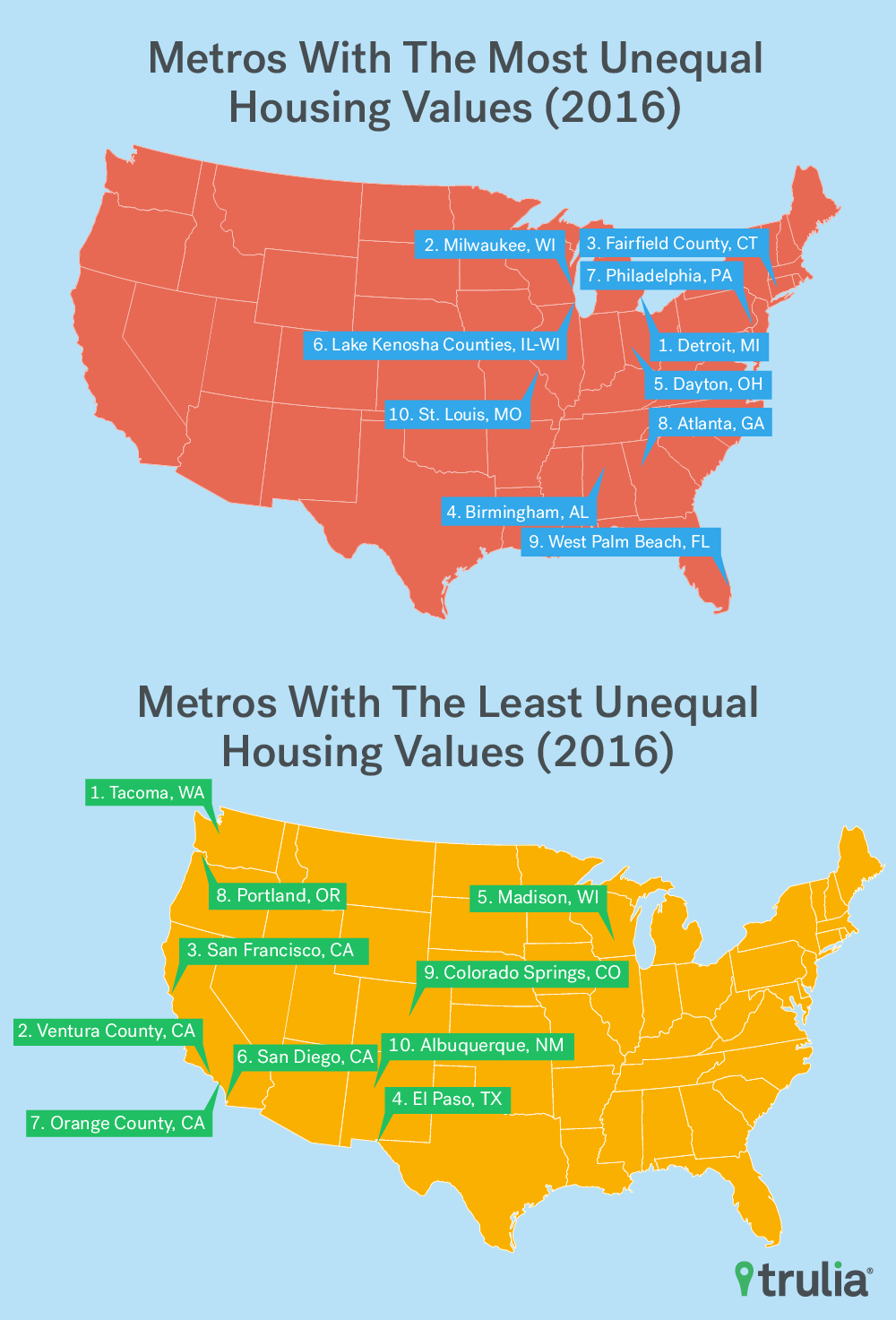 Metros with the Largest Increase in Home Value Segregation

These relationships suggest that efforts to decrease racial and income segregation, respectively, could be addressed by expanding choices in the housing market. The lack of housing diversity by price and ownership type constrain home seekers, particularly those that are lower income or those unable to purchase a home. As a result, they are relegated to finding homes where they are available, further entrenching both racial segregation and income segregation.

Segregation indices reported here are calculated using two methods. The first is the Index of Dissimilarity (DI), which is used to measure how evenly distributed distinct groups are across census tracts in a given metro. The DI reports the share of one group that would need to move to another census tract in order to achieve the same makeup of the larger metro, and can take on values from 0 to 100. For example, a DI of 55 for white-black segregation in a metro would mean that 55% of either group would need to move to another census tract for that metro to become fully integrated. This measure is appropriate when comparing non-continuous groups and is applied here when discussing rental and ownership housing as well as race. The general formula can be found here:

The second is the Index of Proportional Distribution (PI) used for continuous measures such as income or home values. This index counts of the number of census tracts that fall in one of six buckets based on the ratio of the median value of the metric in question at the census tract level to that of the larger metro. The PI is the share of census tracts that fall in the extreme bottom and top buckets, or categories 1) and 6) defined below. For example, if a metro has 100 census tracts and 40 census tracts have very low home values and 20 have very high homes relative to the median home values in the metro, the PI would be 40. The ratios that define the six categories used here are: 1) very low value – under 0.67; 2) low value – 0.67 to 0.8; 3) low-medium value – 0.8 to 1.0; 4) high-medium value – 1.0 to 1.25; 5) high value – 1.25 to 1.5; and 6) very high value – 1.5 and above.

Data on race, ownership type of housing units and income are from the U.S. Census’ 5-Year American Community Survey from 2010 and 2015. Figures from these surveys represent a rolling average over five-year periods ending in the year of release. The choice of using five-year data was driven by the fact that samples are large enough to cover census tracts. Note that because the ACS is a sample survey, they are subject to margins of error. Rental housing is defined by both occupied rental housing units as well as vacant housing that is on the rental market (e.g. rented but not occupied and or for-rent but not occupied). Ownership housing includes occupied owned housing units as well as vacant units that cannot be rented (e.g. sold but not occupied, for-sale but not occupied, and vacant homes used as second homes).