Since February 2012, Trulia’s Housing Barometer has charted how quickly the housing market is moving back to “normal” based on three indicators: construction starts (Census), existing home sales (NAR), and the delinquency + foreclosure rate (LPS). Today, we’re re-launching our Housing Barometer, which better tracks the uneven recovery with some recalibrations and two additional housing market indicators:

For each indicator, we compare the latest available data to (1) the worst reading for that indicator during the housing bust and (2) its pre-bubble “normal” level. We’re also no longer averaging together the “back to normal” levels across different indicators because the average masks huge differences among these indicators. Instead, we are taking a closer look at the recovery of each indicator: three are most of the way back to normal and closing the gap quickly, while two others are stagnating near troublesome lows. 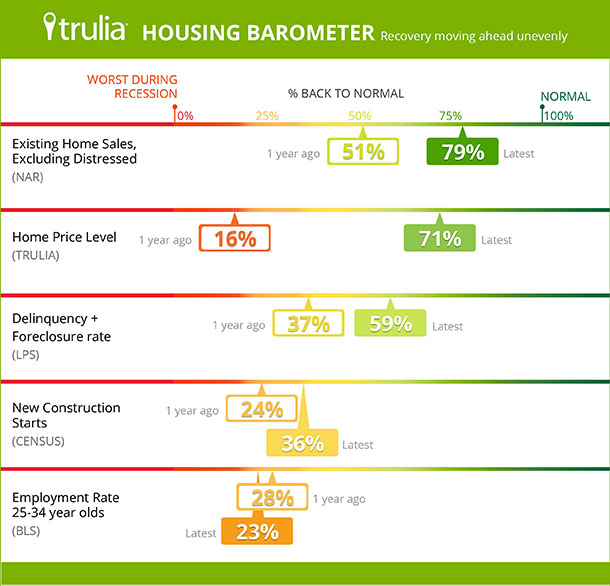 Back to Normal Or Left Behind: 3 in 5 Key Market Indicators Recovering

Of the Housing Barometer’s five indicators, prices and sales are getting close to normal. Delinquencies + foreclosures, while not as close to normal as prices and sales, have improved significantly in the past year. The other two measures – new home starts and jobs for young adults – still have a long way to go:

Which Local Markets are Back to Normal?

Not only are different housing market activities recovering at different rates, the housing recovery is uneven across local markets, too. To track local recoveries, we examine two of the above indicators at the metro level: prices relative to local norms, from Trulia’s Bubble Watch, and construction permits relative to local norms, from the Census. These two measures are strongly correlated: as the scatterplot below shows, in metros where prices are near or above normal, construction permits are also near or above normal. 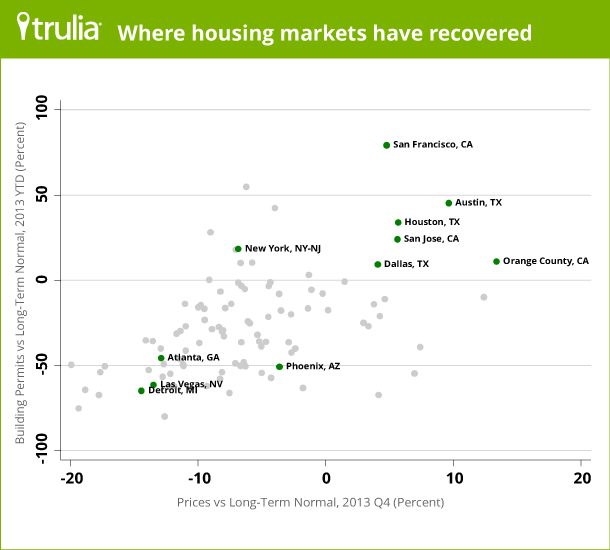 Of the 100 largest metros, 10 are back to normal or nearly there for both prices and permits. (By “nearly there,” we mean that prices are undervalued by less than 2% and permits are less than 10% below normal.) These include Austin, Dallas, and Houston in Texas; Orange County, San Francisco, and San Jose in California; and Denver, Seattle, Nashville, and the Bethesda, MD, metro areas.

To sum it up: Trulia’s Housing Barometer shows that the recovery has progressed on most fronts. Non-distressed sales and home prices are approaching normal levels and could reach them in 2014. Delinquencies + foreclosures are also improving, though “normal” is still more than one year away. The red flags are construction starts and young-adult employment, both of which remain closer to recession levels than to normal. The recovery has gone a lot farther for homeowners, who benefit from rising home values, and real estate agents, whose commissions rise with both prices and sales, than for construction workers or young adults looking for jobs. The recovery also looks much better in the San Francisco Bay Area, Texas, and other markets that are back to normal than in wide swathes of the country where normal isn’t yet within reach. Even as the recovery progresses overall, it remains stubbornly uneven.

NOTE: Trulia’s Housing Barometer tracks five measures: existing home sales excluding distressed (NAR), home prices (Trulia Bubble Watch), delinquency + foreclosure rate (LPS), new home starts (Census), and the employment rate for 25-34 year-olds (BLS). Also, our estimate of the “normal” share of sales that are distressed is 5%; LPS reports that the share was in the 3-5% range during the bubble. For each measure, we compare the latest available data to (1) the worst reading for that indicator during the housing bust and (2) its pre-bubble “normal” level. We use a three-month average to smooth volatility for the four indicators that are reported monthly (all but home prices). The latest published data are November for the employment rate; October for existing home sales and delinquency + foreclosure rate; August for new home starts (September and October were delayed due to government shutdown); and Q4 for home prices.