When it comes to their homes a majority of Americans are a lot like Goldilocks. They’re looking for a place that feels “just right” and in most cases want a home that’s a different size than the one they’re living in now.

That’s the main takeaway from an online survey conducted recently on behalf of Trulia by Harris Poll. We asked Americans about the space they live in and their ideal home size. What we found — even as U.S. home sizes continue to get big and bigger — was a lot of dissatisfaction.

The size of new homes built in the U.S. are now at record highs, with the average new home size sitting at over 2,700 square feet. In fact, new homes today are about 1,000 square feet – or 57% – larger than homes built about forty years ago. But is all this room satisfying American households? To find out, we surveyed a cross-section of over 2,000 Americans and asked them whether they would move into a bigger, smaller, or same sized home as the one they’re currently living in. As it turns out, bigger isn’t always better. 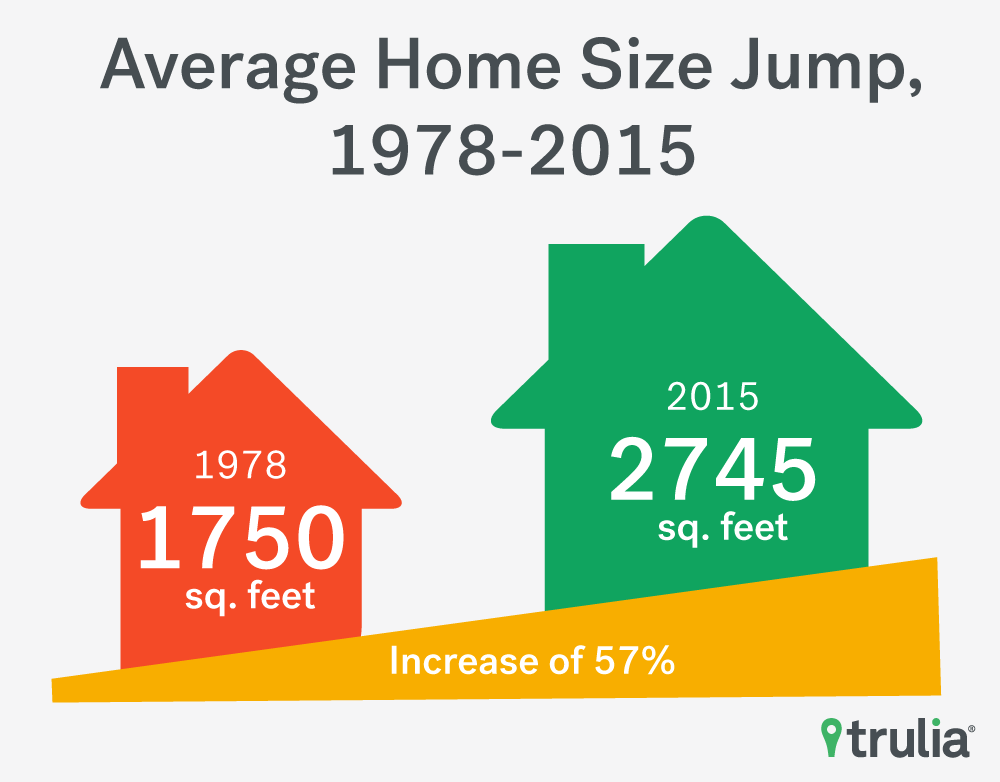 From the survey results, we found:

Americans May Not Be Satisfied With the Size of Their Home, but Bigger Is Not Always Better

American households are living in a world of size mismatch – only 32% of respondents said they would want to move into the same size home as the one they are currently living in if they decided to move this year. That number drops to 29% of households when asked what they would need in 10 years. A full 14 percentage points more of households answered that the size of the home they would want to move into, in a year, would be larger (37%) than their current digs compared to the share that said it would be smaller (23%). However, that number went to zero when respondents were asked what size home they would need in 10 years – 31% for each. 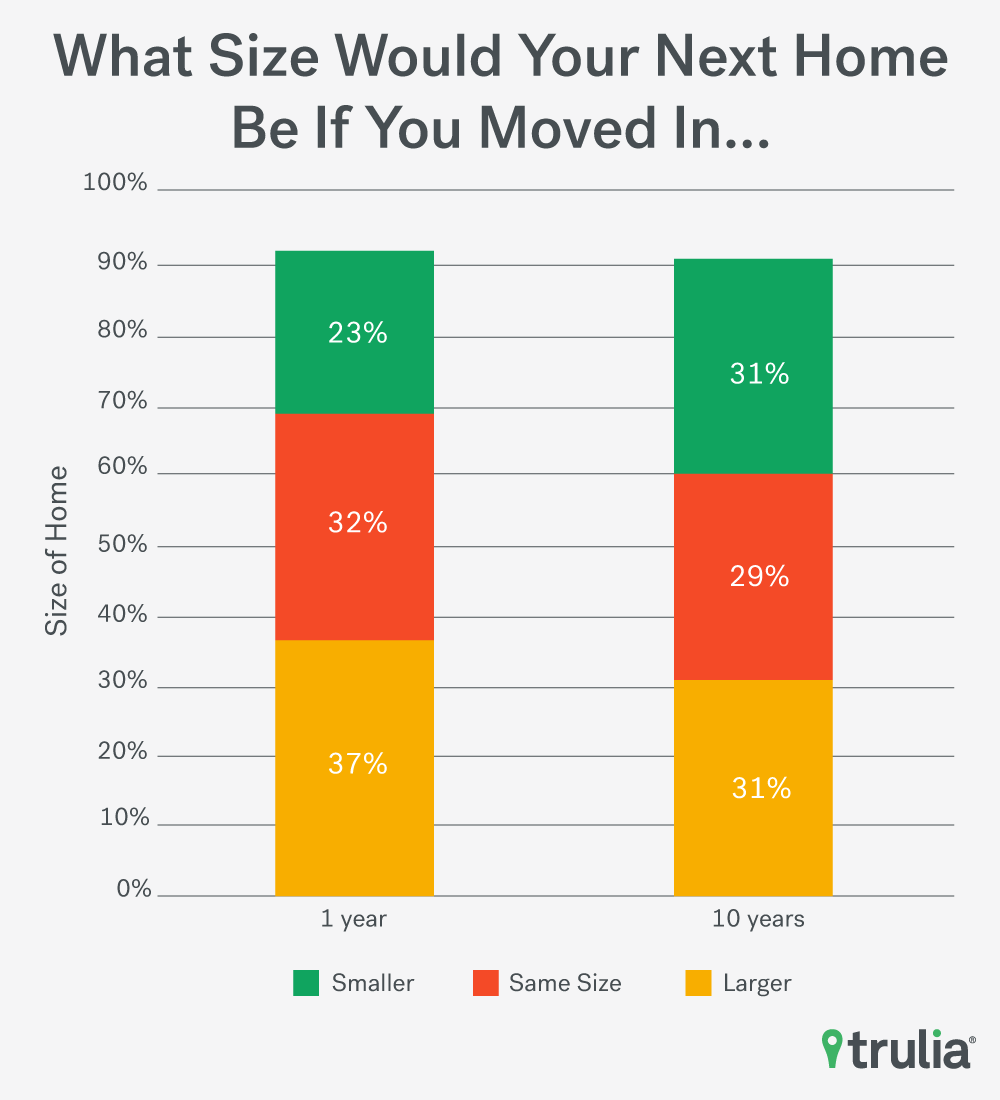 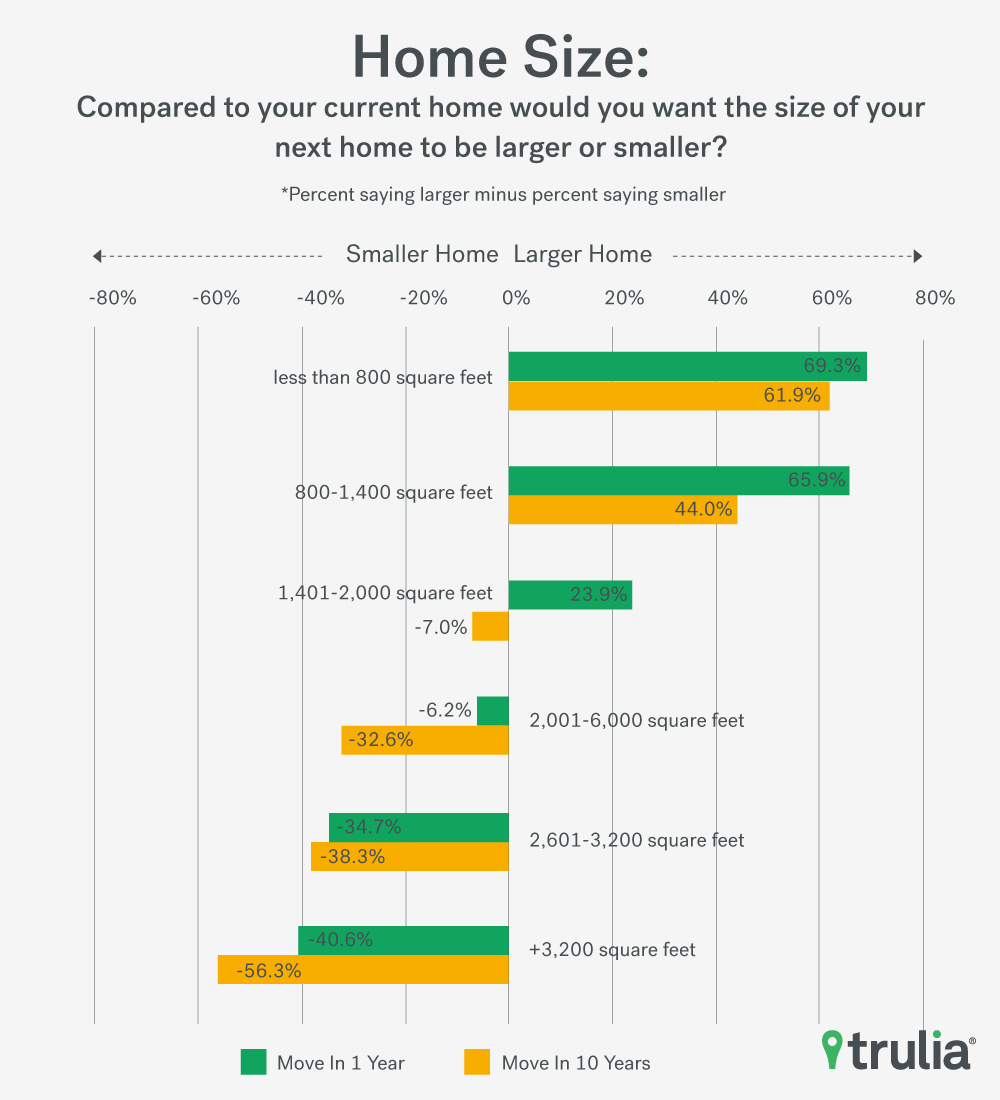 Trulia’s analysis also found that the desire to go big declines with income, and the breakpoint of when more households prefer to downsize than upsize is around an annual household income of $150,000. For those making under $150,000, the desire to upsize is large with 65% saying they would move into a larger home if they had to move this year. On the other hand, 53% of those making over $150,000 would actually move into a smaller one. 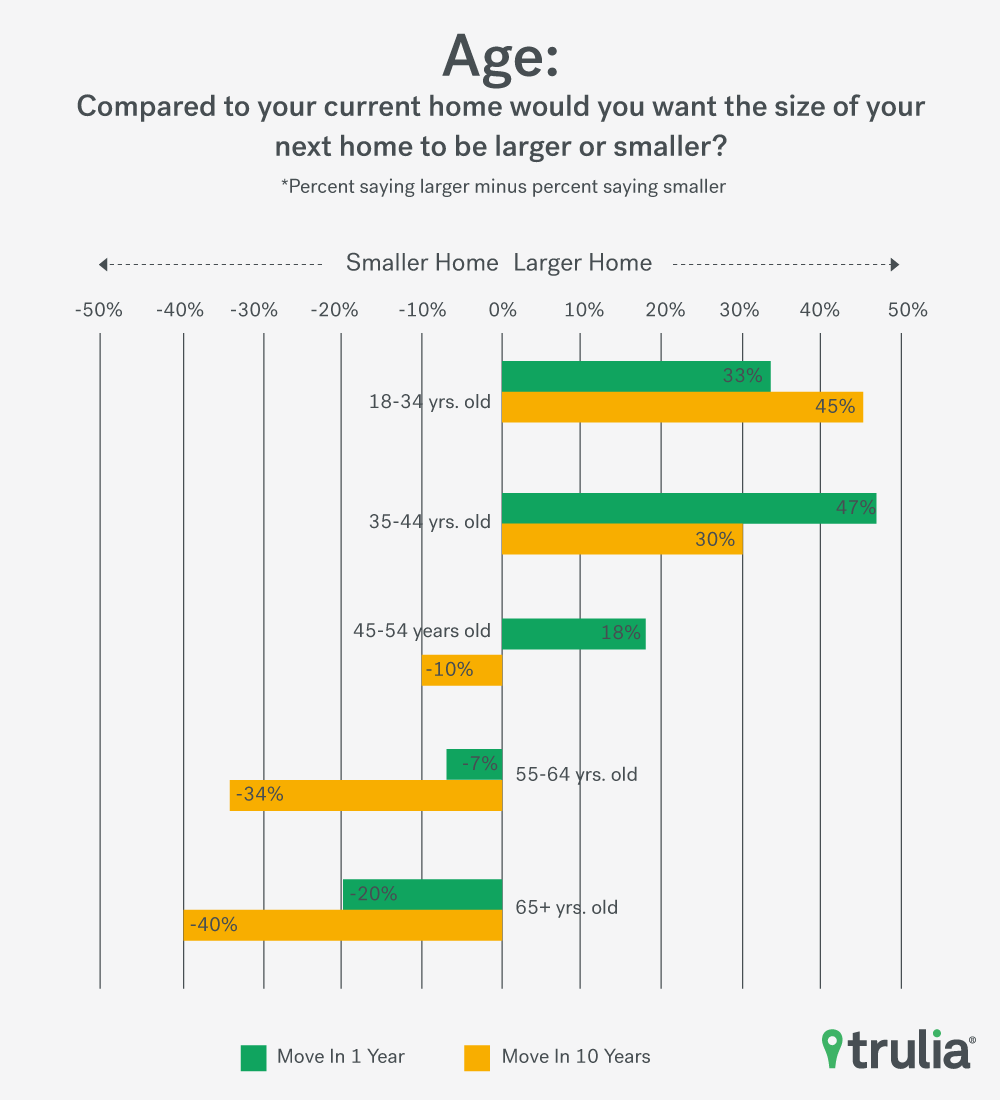 But wait a minute: aren’t older folks the ones living in larger homes, and thus, would be more likely to want to downsize? The answer is yes, but the sentiment still holds strongly even when we look across current home sizes in each group. More millennials, even ones living in homes larger than 2,000 square feet, would choose to move into a larger home if they decided to move in a year (86.3% vs. 13.7%). On the flip side, a majority of boomers (64.2%) – except those living in the smallest of homes (under 800 square feet) – would likely move into a smaller home if they decided to move this year. So even when controlling for the size of home one is currently living in, young Americans want to go big while older Americans want to go small. 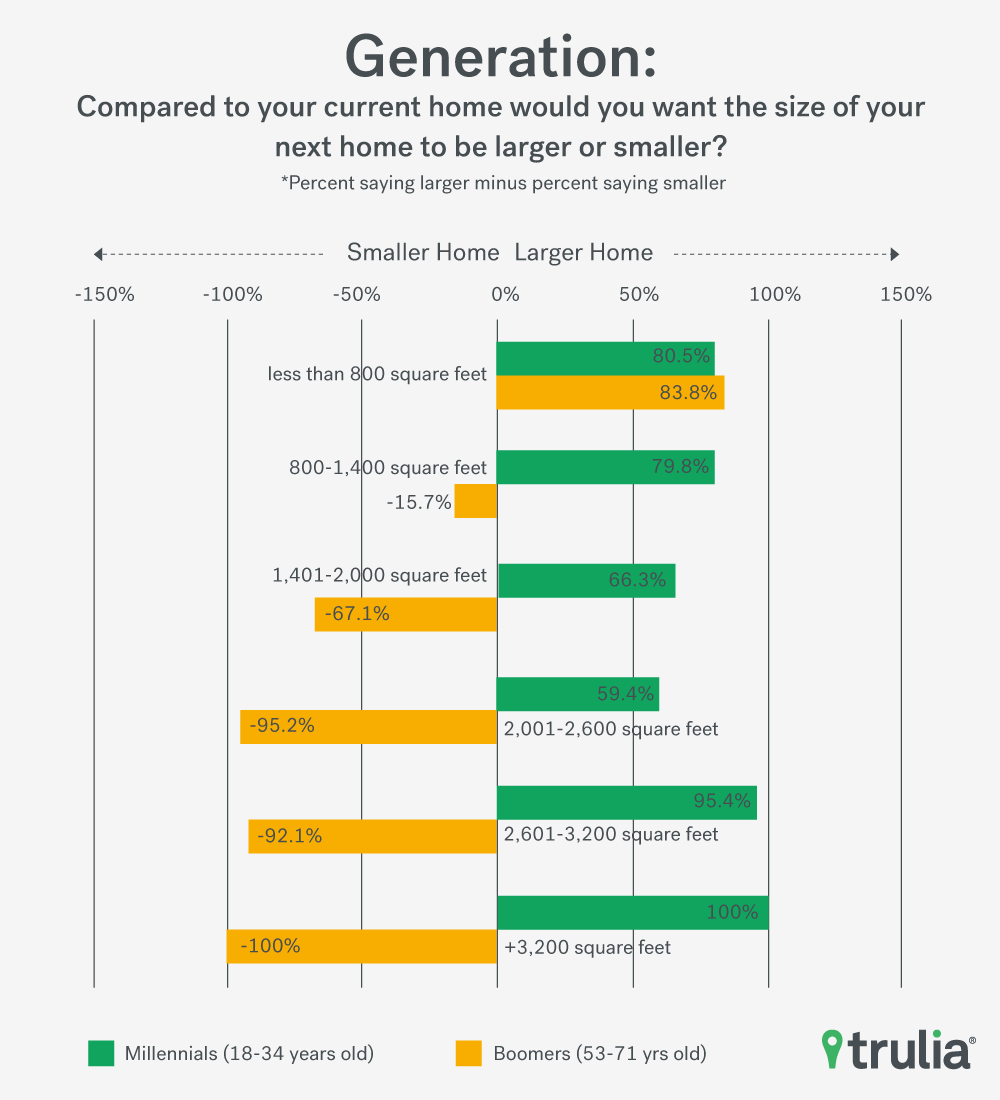 Sizing it All Up

What does all of this say about home size preferences in the U.S.? For one, many Americans are living in a world of home size mismatch. Less than a third would likely move to the same size home than the one they’re currently living in, regardless of whether the move is in the short term (one year)(32%) or the long term (10 years)(29%). Second, larger homes don’t always quench a household’s thirst: those living in the largest homes in the U.S. are actually the most likely to want a smaller home if they decided to move in either the near or long term. Last, there are clear generational differences when it comes to preferences for home sizes, even when controlling for the current size of home households are living in. Millennials overwhelmingly prefer larger homes while their parents, boomers, want to downsize to smaller abodes. The key to satisfaction, it seems, may be a swap of homes between these two generations.

The survey was conducted online within the United States by Harris Poll on behalf of Trulia from February 1-3, 2017 among 2,1 75 U.S. adults ages 18 and older. This online survey is not based on a probability sample and therefore no estimate of theoretical sampling error can be calculated. For complete survey methodology, including weighting variables, please contact dweidner@trulia.com.