Trulia’s first Bubble Watch report, from May 2013, explains our methodology in detail. We look at the price-to-income ratio, the price-to-rent ratio, and prices relative to their long-term trends, using multiple data sources, including the Trulia Price Monitor as a leading indicator of where home prices are heading. We then combine these various measures of fundamental value rather than relying on a single factor, because no one measure is perfect. Here’s what we found.

We estimate that home prices nationally are 4% undervalued in the fourth quarter of 2013 (2013 Q4), which means we’re nowhere near another housing bubble. To put this in perspective, prices were as much as 39% overvalued in 2006 Q1, at the height of last decade’s bubble, then dropped to being 15% undervalued in 2011 Q4. One quarter ago (2013 Q3) prices looked 6% undervalued; one year ago (2012 Q4) prices looked 13% undervalued (see note at end of post). This chart shows how far current prices are from a bubble: 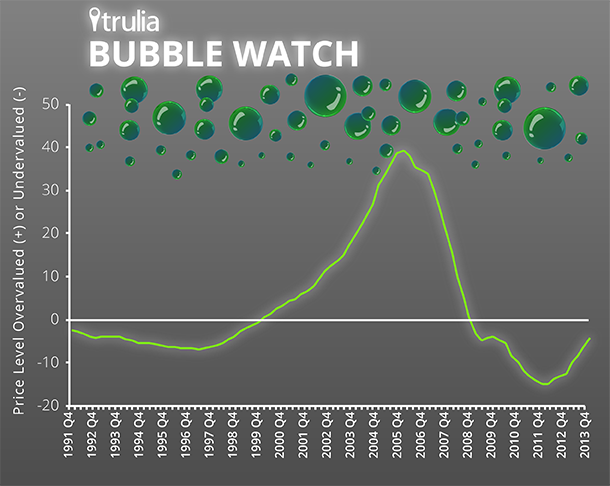 At the metro level, home prices are above their fundamental value in 17 of the 100 largest metros. Most of these overvalued metros are only slightly so: of the 17 overvalued metros, just two – Orange County and Los Angeles – look at least 10% overvalued. (Austin rounds up to 10% but is actually slightly below.) Several California metros also stand out for having both overvalued prices AND sharp price increases, including Orange County, Los Angeles, Oakland, and Riverside-San Bernardino.

Despite Climbing Prices, This is Not Last Decade’s Bubble

If prices nationally are 4% undervalued, why are so many people worried that a new bubble is forming? Because prices have risen quickly over the past year, and even with the recent slowdown in the past few months, rising prices stoke bubble fears. The October 2013 Trulia Price Monitor reported that asking prices were up 11.7% year-over-year – roughly the same sharp increase in as in 2004 Q3, when the housing bubble was inflating.

Today looks different from 2004 Q3 in two other important ways, too. First: unlike mid-last decade, we are not overbuilding. New home starts today are approximately 40% below normal levels. Second: mortgage lending for new-home purchases is tight today, unlike last decade when mortgages were, if anything, too easy to get. Therefore, even though prices are rising today as fast as they were during last decade’s bubble, today’s price gains are a post-crash rebound, not a new bubble. Today, unlike last decade, prices are slightly undervalued, construction is low, and mortgage credit remains tight.