Neighborhoods are where the fun is. Where a home is matters just as much, if not more than floor plans, updated kitchens and square footage. With that in mind, Trulia’s geospatial and economics teams worked together to show home seekers where they can find amenities that will help them stay active and healthy. We’ve not only launched a new set of interactive maps that illustrate where you can find Quiet Streets, Great Places to Play, as well as Care and Essentials, we’ve created a Live Well Index that ranks neighborhoods across the country according to the abundance of such features.

Putting it all together, we found:

How do we measure living well? We use data from our three Live Well maps to construct a Live Well Index, which ranks each neighborhood by:

Not all neighborhoods are alike: some are large, some are small, some have a lot of people, and some have none. To make sure these differences don’t bias our index, we only look at neighborhoods that are between one and two square miles in area – neighborhoods large enough to have a decent number of live well features but small enough to actually feel like a neighborhood. Without further adieu, here are the best neighborhoods for living well in the U.S.

Those looking to live well in a small city would be best off in the Locust Grove neighborhood of Charlottesville, Va. Locust Grove sits just north of downtown Charlottesville, and boasts a high concentration of play-centric amenities such as the Meadow Creek golf course and numerous playgrounds. It’s also nestled between three large parks and is quiet – over half of it’s streets have low traffic volume. Another added bonus: It’s close, but not too close, to the University of Virginia, which is full of restaurants, bars, and bookstores. 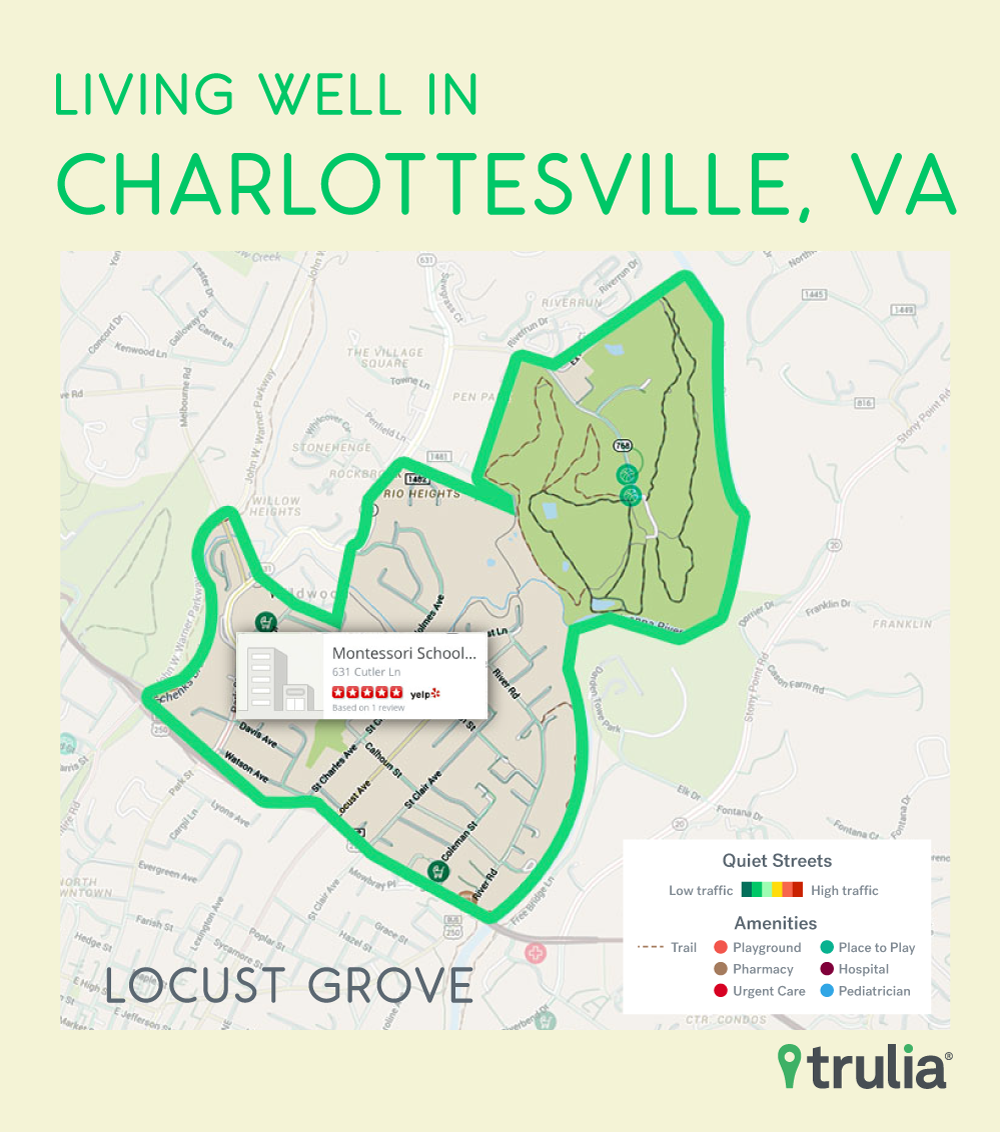 Other small-city neighborhoods making the list include Noelridge Park in Cedar Rapids, Iowa, which is home to a large number of play-centric amenities and trails, and Burns Park in Ann Arbor, Mich., which has great access to health care facilities due to its proximity to the University of Michigan. Future Wolverines take note: residents of Burns Park pay the biggest premium to live there at $267 per square foot – the highest price tag amongst our five best small-city neighborhoods. 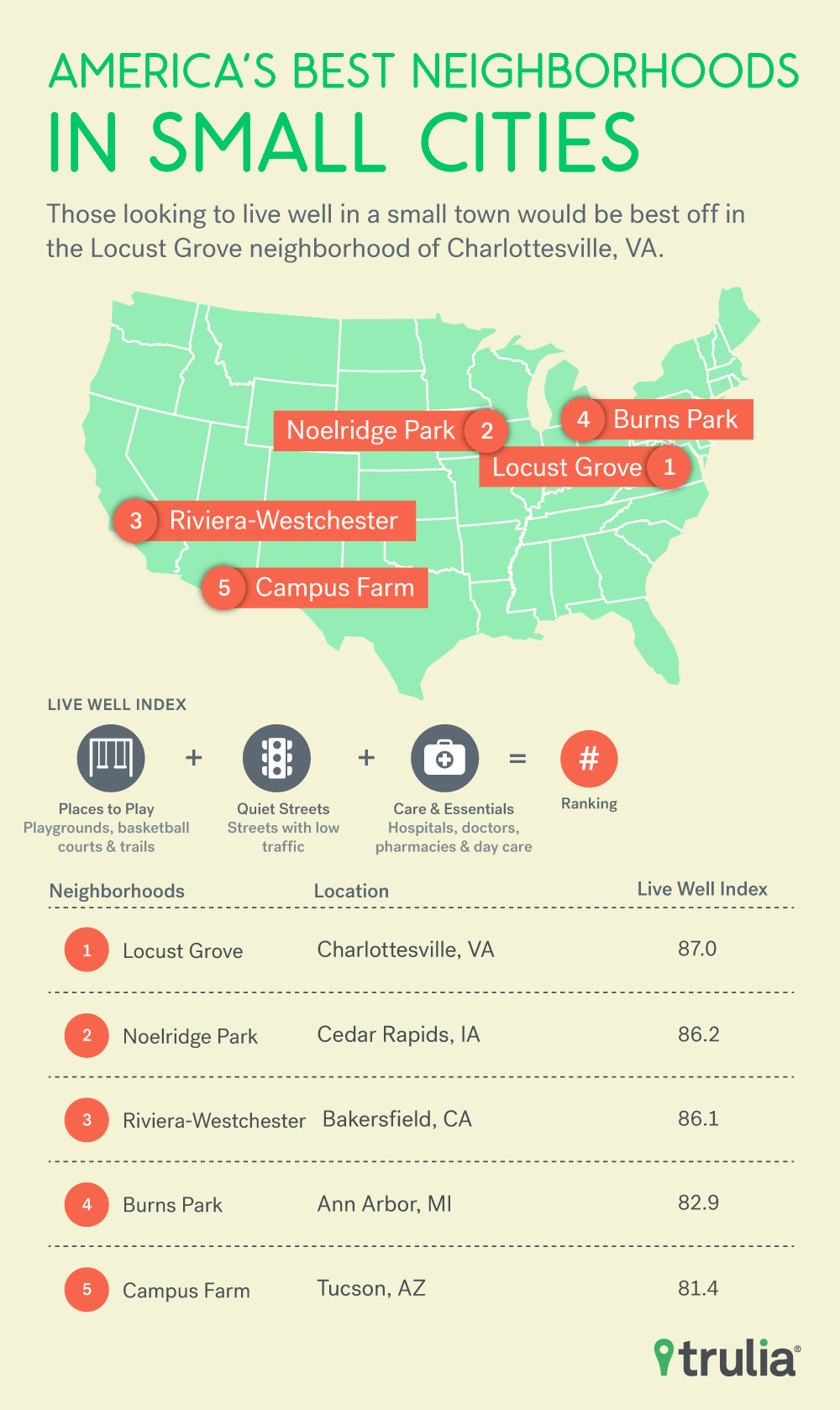 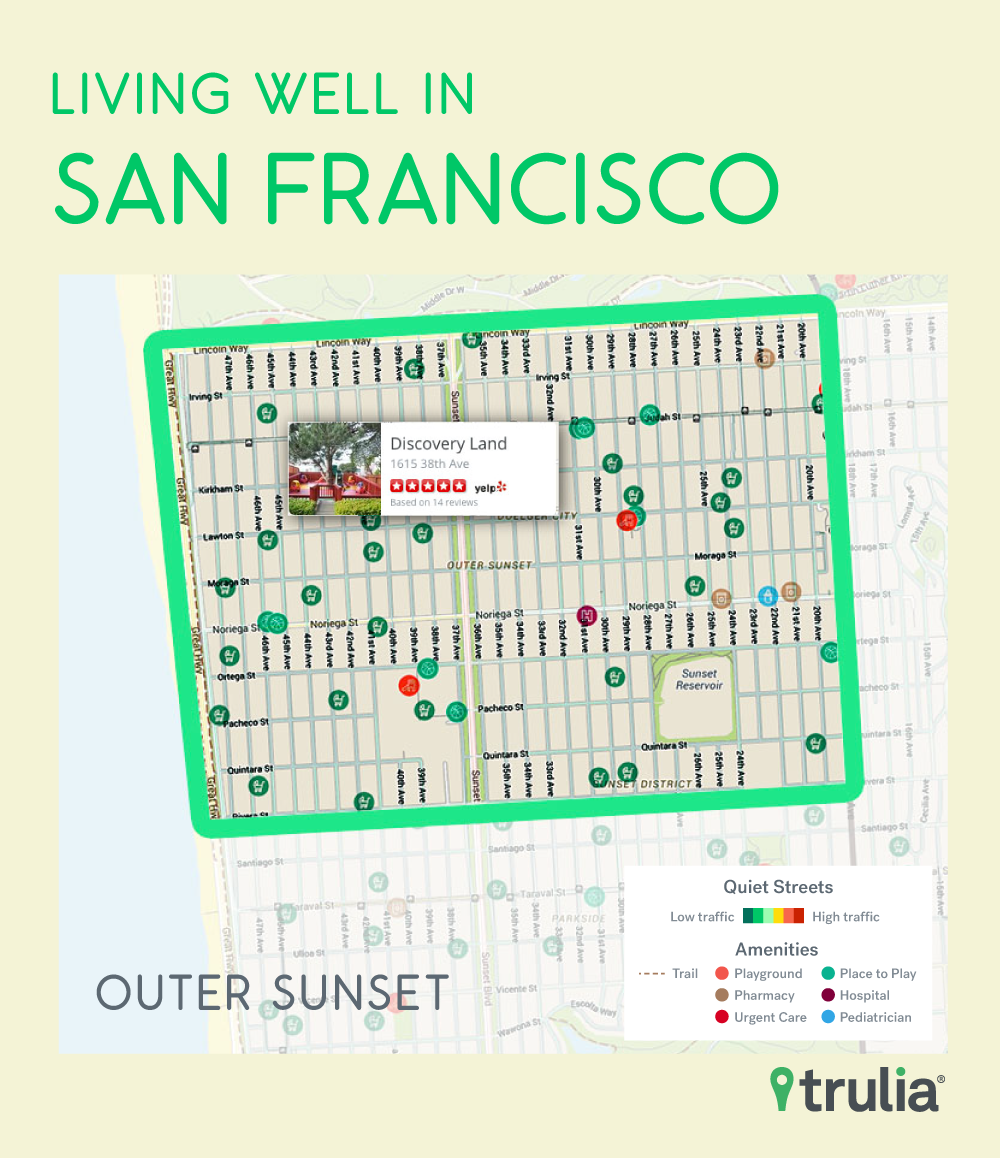 Looking for a better deal? Head to the bayou. Living well in the Big Easy is easy and cheap: the West Riverside neighborhood of New Orleans comes in second because of it’s proximity to Audubon Park, the Children’s Hospital of New Orleans, and the banks of the Mississippi River. And it’s a bargain compared to the Outer Sunset, at just $266 per square foot. Other neighborhoods in midsized cities that make the list are Crestivew in Austin, Texas, Driftwood in Fort Lauderdale, Fla., (in the city of Hollywood), and Riverwest, along the Milwaukee River in Wisconsin. 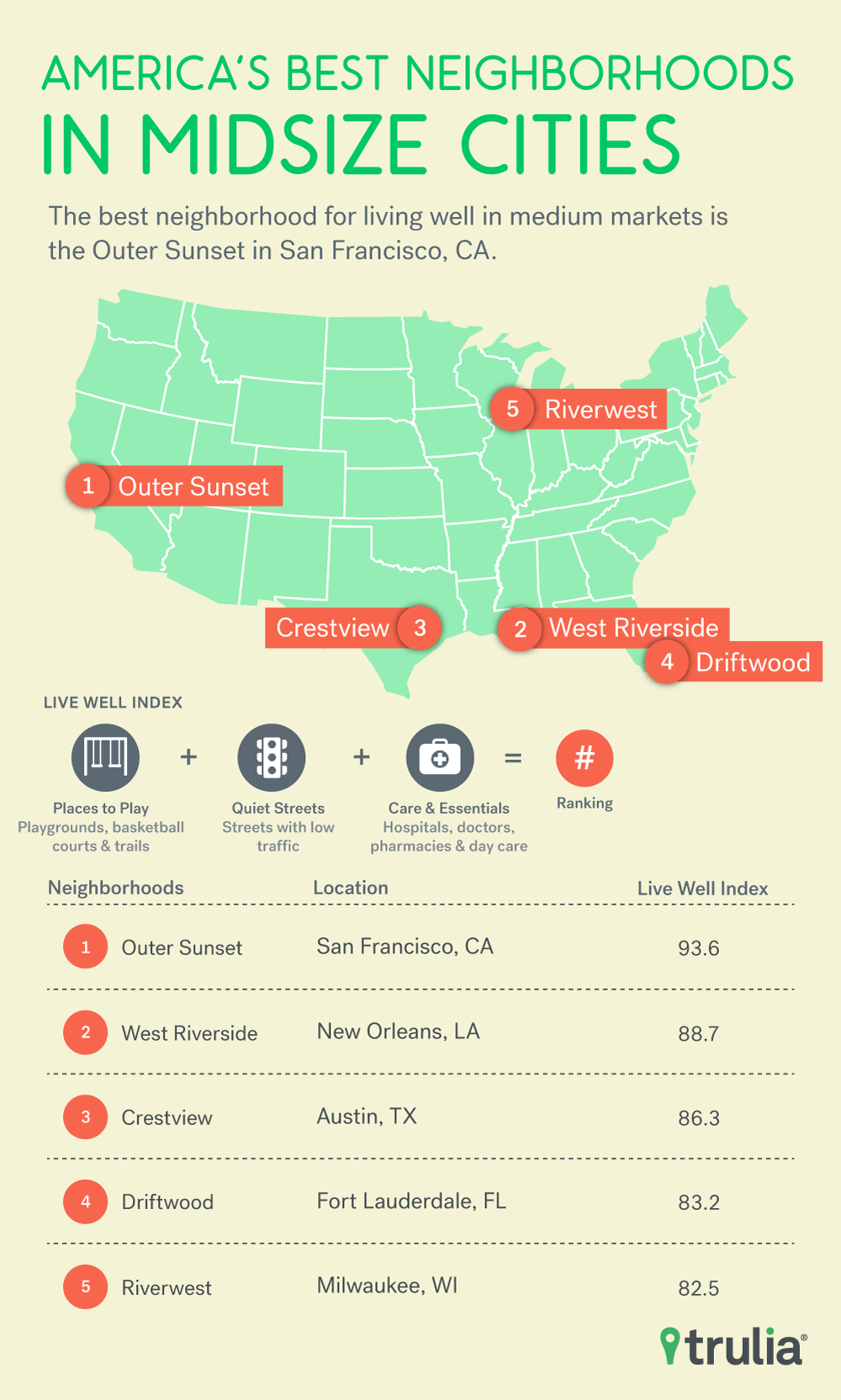 For big-city folks looking to live well, Southern California is the place to be. Four of the top five neighborhoods scoring highest on our live well index are in the Southland. Sunny Ocean Beach in San Diego is an urban hiker’s paradise. Sandwiched between the Pacific Ocean, Mission Bay, and Point Loma, it boasts a lengthy network of trails and footpaths, and also a number of surf shops, skate parks, and volleyball courts to help residents live the beach lifestyle. 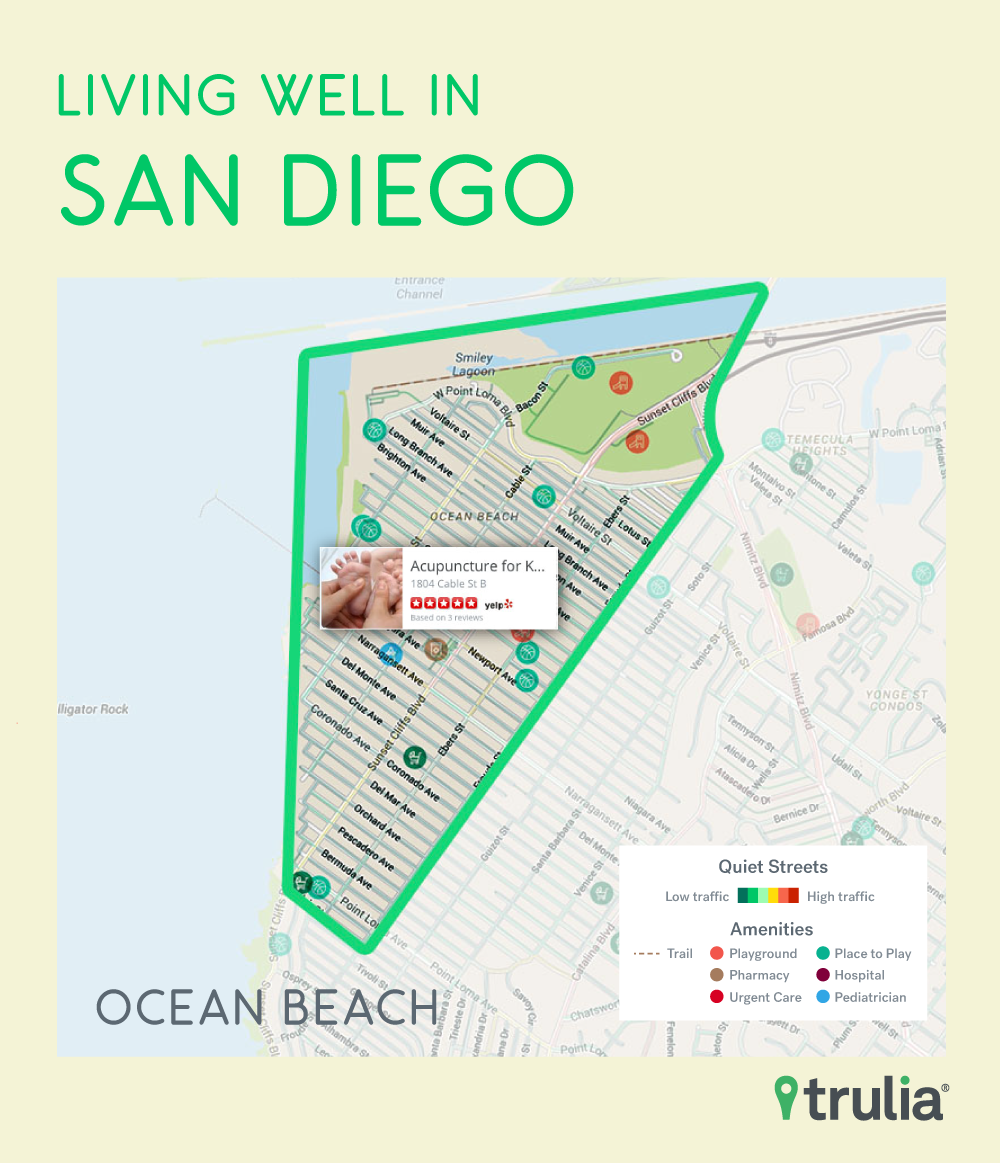 It’s neighbor to the north – Plaza in Long Beach – comes in second on our list, and also ranks high because of it’s proximity to play-centric amenities. Plaza sits next to El Dorado Park, which is home to a golf course, tennis academy, and archery range, as well as several miles of footpaths. Other neighborhoods that make the large city list include Beverly Center in Los Angeles, Sunpark in Santa Monica – which is the priciest of large cities neighborhoods at $752 per square foot – and Sunset Hill in Seattle. 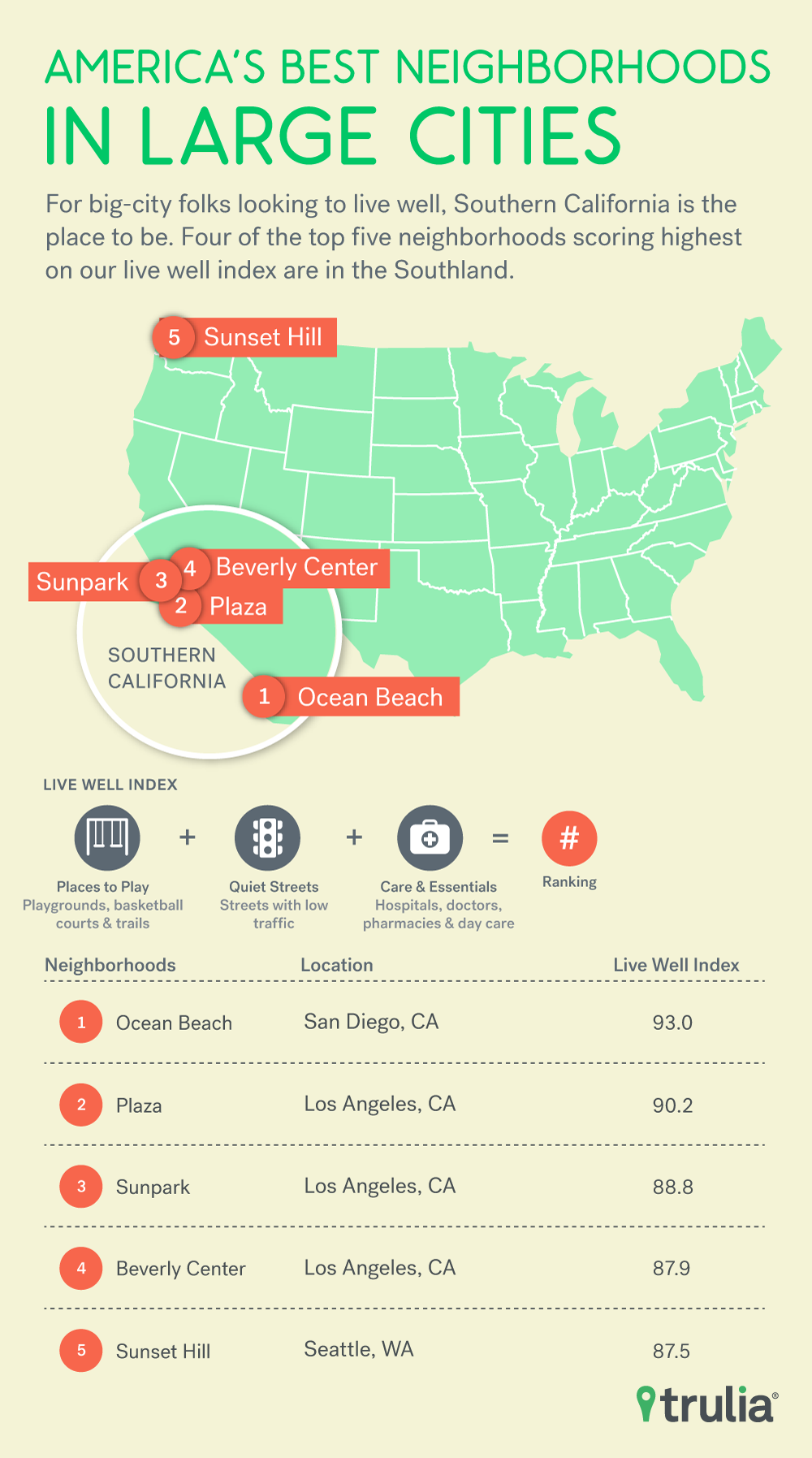 Make no mistake: there are plenty of fantastic neighborhoods in the U.S. for living well that don’t make our list. This is because many neighborhoods perform well in one category but not in another. For example, Ala Moana in Honolulu is the best small-city neighborhood for play, given its large number of outdoor shops and recreation services. But it ranks low in the share of quiet streets because it’s near high traffic Waikiki Beach, which depresses Ala Moana’s overall ranking. But don’t take our word for it: check out our new Live Well maps yourself to find a neighborhood that’s best for living a healthy lifestyle.

To find out where the best Live Well neighborhoods are in America, we cranked through the neighborhood amenities data on our site and created a ranking based on four metrics in three categories: quiet streets on Trulia (low volume street segments), great places to play (open street map trails and Yelp play-centric amenities), and care and essentials (health-care related Yelp amenities).

Our quiet streets data is generated from a proprietary algorithm that estimates traffic volumes on a given road segment based on how “central” that segment is relative to other roads in that neighborhood, and is classified into five levels of estimated traffic volume. We classify a quiet street as one that falls within the bottom quintile.

Second, we use data from the “Active” and “Health Care” Yelp categories to find the location of play-centric and health-centric amenities, which includes places and services such as playgrounds, golf courses, hospitals, and pediatricians.

Last, we combine these to create a weighted average of each neighborhood’s ranking in each category. The weighting scheme is as follows: quiet streets (33%), great places to play (16.5% trails and 16.5% play-centric), and care and essentials (33%). The index ranges from 0 – 100, with 100 being the best scoring and 0 being the worst.