Last year the Census reported an increase in mobility in 2012 to 12.0%, led by an increase in longer-distance moves.  However, new 2013 data suggest that the mobility rebound we saw in 2012 might have been short-lived.

Using the Current Population Survey (CPS) microdata that underlie the published Census mobility tables and report (see note below), we found that mobility in 2013 dropped back down to 11.7%, just slightly above the 2011 all-time low of 11.6%. Clearly, Americans are not yet back on the move.

This graph shows the percent of Americans who moved in the past twelve months, as of March of each year. 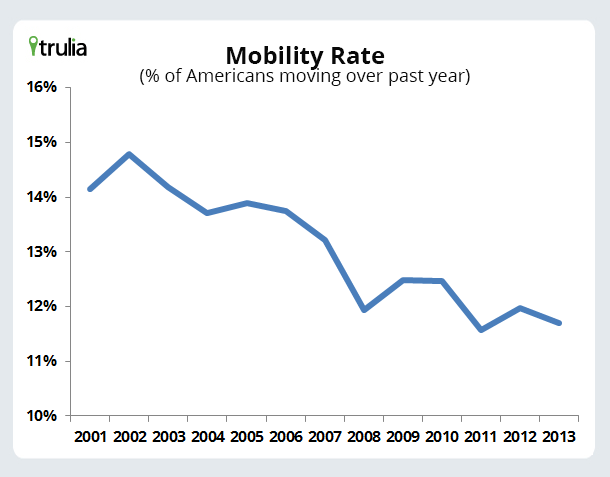 In 2013, short-distance moves (within-county) are at an all-time low – just 7.5% of Americans made this type of move in the past year. By comparison, longer-distance moves – between counties within the same state, and between states – have rebounded a bit from their low points in 2011 and 2010, respectively. But these longer-distance moves are still much less common now than before the housing bubble burst. 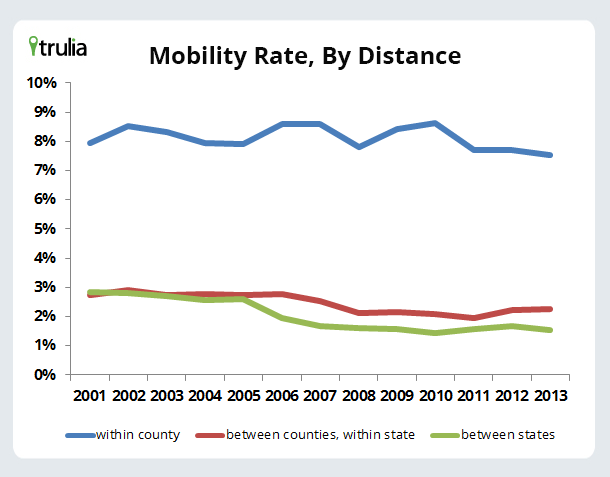 The reasons for moving are closely tied to the distance of the move: most within-county moves are for housing reasons, while nearly half of between-state moves are for job reasons. Looking at specific job and housing reasons shows the relationship between distance and reasons even more clearly: for instance, a new job or job transfer is the main reason for just 3% of within-county moves, but 32% of between-state moves.

The Reasons for Moving Change with the Recovery

As the housing bubble was forming in 2003 and 2004, there was an increase in the share of Americans moving because they wanted a new or better home.

In 2012 and 2013, as the housing market and economy recover, an increasing share of people are moving for new jobs and to become homeowners. But, with rising home prices, there’s been a decline in the share of people moving for cheaper housing. The graph shows this: 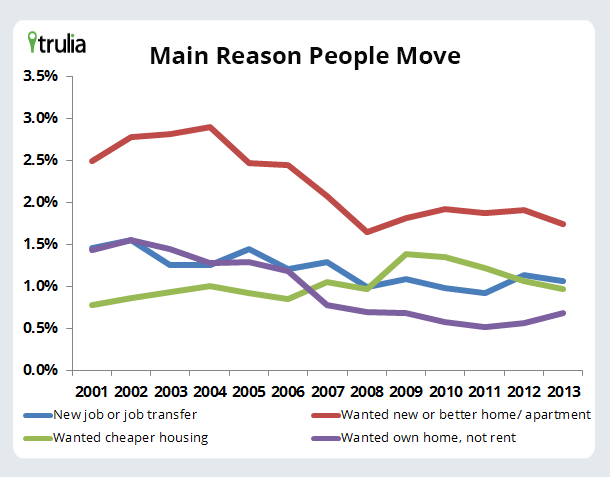 Note: the graph shows the percent of all Americans – not just movers – moving in the past year for a specific reason. Also, “foreclosure/eviction” was added to the survey starting in 2011 as a reason for moving, which might have affected the trends in other categories.

All in all, the recovery is having a mixed effect on American mobility. As the job market picks up, more Americans will move, particularly longer-distances, but the job recovery is still slow. Furthermore, fewer people are on the move for cheaper housing. As a result, mobility took a step back in 2013 after increasing in 2012. As the recovery continues, we should at least see an increase in longer-distance moves, but with the many-decade decline in mobility, it’s unclear when or if mobility will return to pre-bubble levels.

Note: This blogpost is based on the Annual Social and Economic Supplement (ASEC) of the Current Population Survey (CPS), which is conducted in March of each year by the Census and the Bureau of Labor Statistics. The 2013 ASEC microdata have been released, but the published summary tables on mobility and migration for 2013 have not, as of late September 2013.