They are the people we depend upon even if we don’t see them every day: teachers, first responders, restaurant workers and doctors. But for the majority of them who live in America’s biggest housing markets, buying a home in the community they serve is getting harder – and in a few places, out of reach.

As for closely watched tech workers? It turns out programmers find most markets unaffordable, too.

This year we revisit our report that examined how many homes on the market doctors, teachers, first responders and restaurant workers could afford. The news is discouraging. Workers in these roles are finding it even harder to live in the communities they serve.

Using the latest median wage data for each occupation group from the Labor Department’s recently-released employment report, we calculated the share of homes for sale in each market that are affordable to each category of worker. We define affordability as having a debt-to-income ratio of 31% or less, which means one’s monthly payment on housing would take up no more than 31% of one’s paycheck. We assume that borrowers can put down a 20% down payment for a 30-year fixed rate mortgage at a 4.44% interest rate. We also include any homeowners’ association fees on the property, property tax and insurance into the affordability calculation (see the methodology below for more details). We found:

Teachers are worse off in nearly all metros covered in this study. In only eight markets was there a greater share of listings affordable for teachers. However, in just four of those markets did that number increase by more than one percentage point, including El Paso, Texas (5.7 percentage points), Bakersfield, Calif. (3.0 p.p.), Virginia Beach-Norfolk, Va. (2.1 p.p.), and Montgomery-Bucks-Chester Counties, Pa. (1.6 p.p.). Wage growth outpaced listing price growth in all of these markets except Bakersfield, and all four of these markets were in the top five places which saw the largest increase in teacher wage growth. 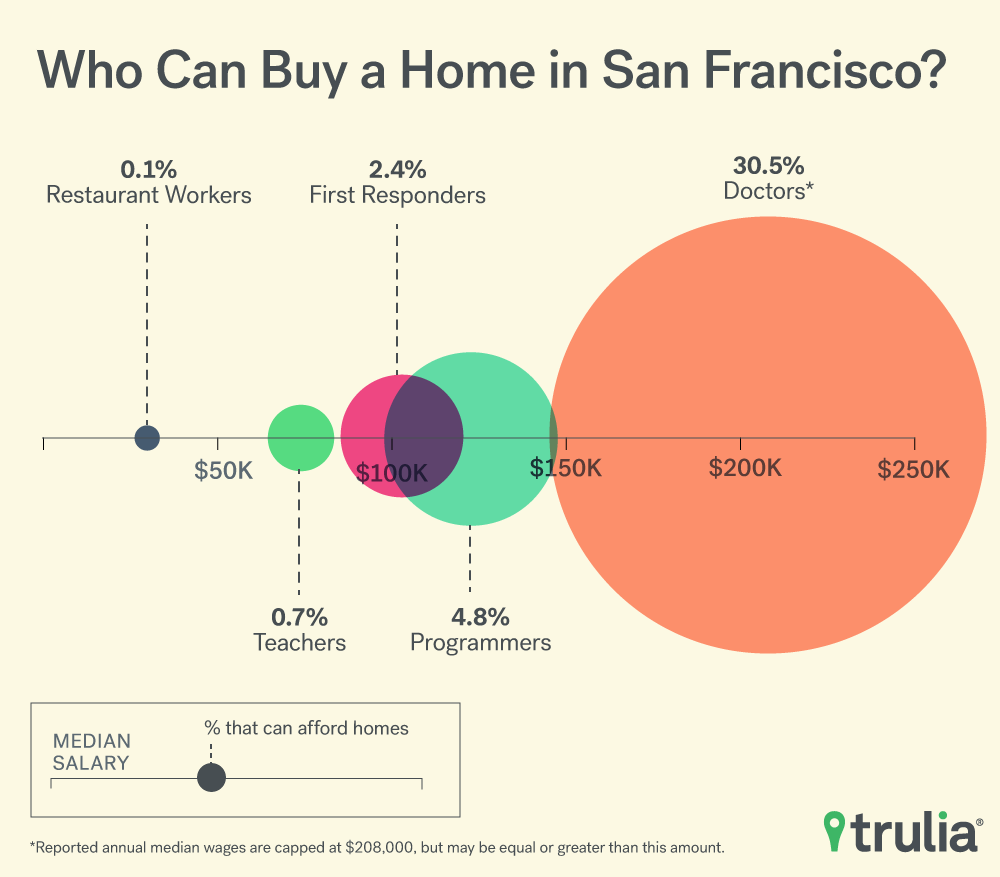 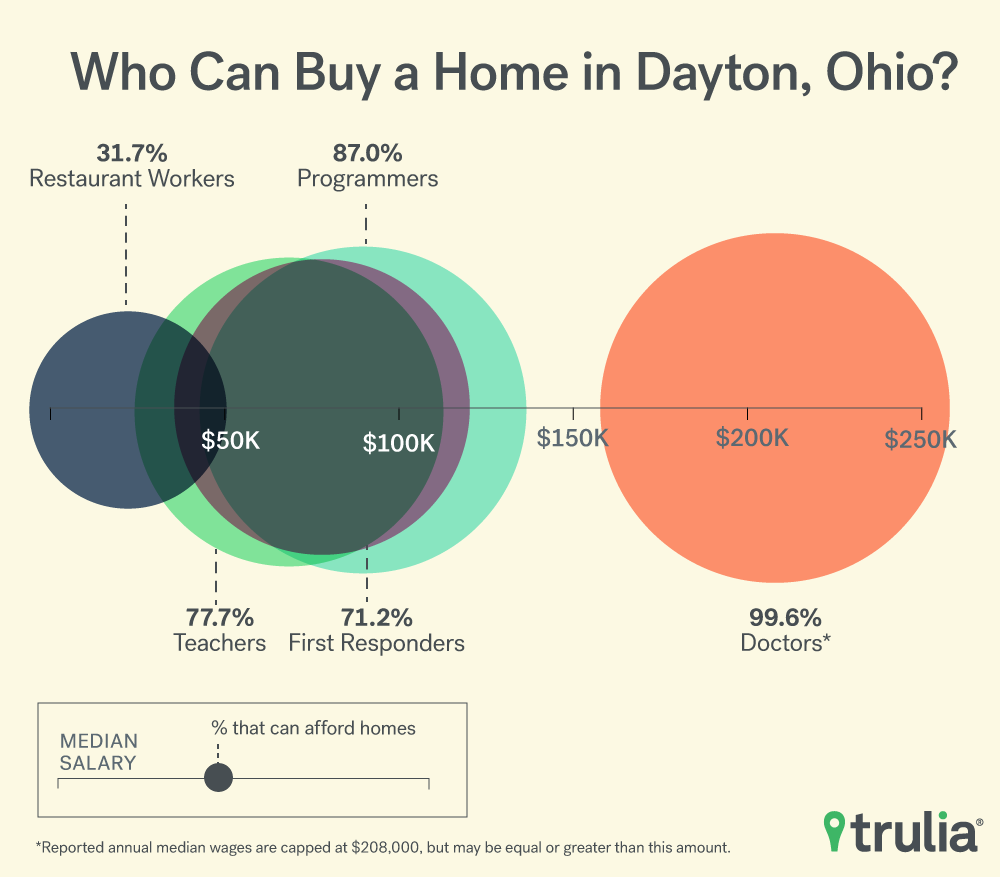 Markets where teachers fare worse this year than last were most likely to see housing prices outpace wages. More than one-quarter of the 93 metros saw a double-digit decrease in the share of homes affordable to teachers, led by Tacoma, Wash. (-24.4 percentage points), Colorado Springs, Colo. (-21.7 p.p.) and Indianapolis, Ind. (-17.3 p.p.). Tacoma and Indianapolis are also the markets that led home prices changes since last year.

Restaurant workers received some positive news this year as the share of homes they can afford in Detroit went up to 50.6%, which increased from last year’s market-leading 42.9%. However, this was largely attributed to the median listing price in Detroit dropping 19%. Elsewhere, the share of homes restaurant workers can afford are in the single digits in 61 markets, up from 56 last year. 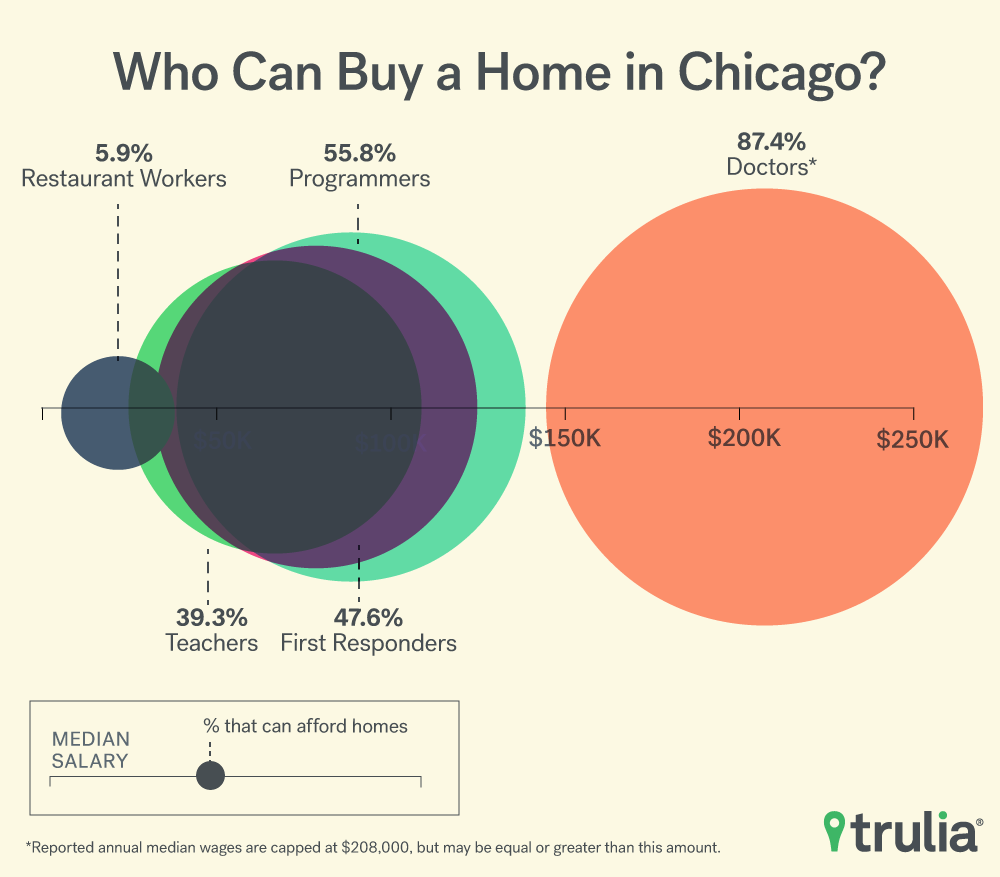 How Programmers Fare in Tech Hotspots

Affordability is defined as spending 31% or less of one’s monthly income on housing. In order to find the share of affordable homes on the market for the median income earner for each occupation we calculate the maximum amount that each person can allocate towards a mortgage payment based on their wage. We evaluated the listing price of each home effective March 29. We subtracted a 20% down payment and calculated the monthly mortgage payment using the prevailing 30-year mortgage rate (4.44%) at that time. We also considered HOA fees, mortgage insurance and property taxes. Finally, we took the number of listed properties that the median income earner for each occupation could afford.