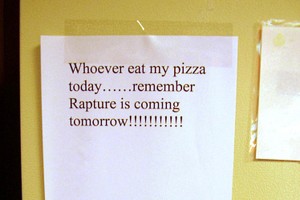 Communication is key. Instead of leaving a note, try the direct approach next time. (Image via PassiveAggressiveNotes.com)

Let’s be completely honest with each other — that’s the big lie we tell at the beginning of every roomie relationship, including the one I had with Debbie (not her real name). And that pledge failed as soon as I turned on the TV in our apartment.

I owned the television, but graciously decided it belonged in the living room for everyone to enjoy. Debbie immediately started joining me as I watched my favorite shows — Scandal, Bob’s Burgers, and Game of Thrones, to name a few — and it was so awkward. Then she began making so many comments. Among them: “None of these characters make sense”; “I don’t get why this show is considered funny”; and “Why don’t you like any good shows?”

After the last remark, I remember tossing the remote on the couch and storming off to my room. What I didn’t realize then was that I had given her exactly what she wanted: the TV all to herself. Her commentary was her passive-aggressive weapon in what would become an ongoing War of the Couch Potatoes.

“When you’ve got a passive-aggressive roommate, you’re dealing with someone who has honesty issues,” says relationship expert April Masini of Ask April. “Instead of being upfront with what’s bothering your roommate, he or she is going to turn an insult into a joke, which is a passive way of being aggressive.”

But experts say there are plenty of ways to clearly tell your roommate to do his or her dishes, keep the volume down, and, in my case, mention you’d like to watch TV.

Instead of storming off to my room and cueing up Hulu to watch Olivia Pope’s latest adventure, experts say, I should’ve opened up communication immediately by saying, “Are you saying my TV shows aren’t your type and you’d like to watch something else?”

“Generally, the feeling that you feel from the individual that is acting out passive-aggressive can give you some information on what they are trying to communicate; however, the goal is to not trouble yourself with reading into the implied message,” says marriage and family therapist Lisa Bahar. “The idea is to communicate in an assertive way. Be matter of fact, avoid gossip, cold shoulders, huffing and puffing.”

Hailey, a renter who declined to give her full name, found that this approach worked when she invited a friend to stay over — and one of her roommates got mad and involved their third roommate.

“I found that what worked best was to have a conversation with them about them being able to come to me if they had an issue, and I tried to make a point of talking to them about my issues rather than leaving a note,” she says.

Realize the reason(s) behind it

As I lived and reluctantly watched TV with Debbie, I soon learned that she grew up in a household filled with three brothers who never let her have their family TV to herself. That made me understand her possessiveness a little more — just a little. Mind you, it was still my television and I needed it when I needed it so I could see what was going on in Westeros.

“One of the reasons people act in passive-aggressive ways is due to irrational beliefs about the direct expression of anger,” says Los Angeles–based psychotherapist Aimee Martinez. “Most likely, these beliefs that anger is unacceptable, dangerous, and should be avoided developed while they were growing up. So as a coping strategy, the person attempts to hide anger behind infuriating passive-aggressive behaviors.”

For Alan Abel, he found that the passive-aggressive route was the only one that worked with his roommate, Greg (not his real name). Abel moved into a Manhattan apartment, but former tenant Greg needed more time to find another place and Abel agreed to let him stay — until he caught Greg drunk and asleep with a cigarette dangling from his mouth that set a curtain on fire.

“I had put out the smoldering curtain and took the cigarette out of his mouth,” Abel says. “The next day, we had a confrontation. I said I wanted him out of my apartment pronto. He refused and said I would have to go to court.”

Abel had to concoct an eviction scheme with his landlord that finally — and passively — got Greg to move out. Abel changed his locks and lived happily ever after. As for Greg, Abel heard that he’s still starting fires. (Yikes.)

Have you dealt with passive-aggressive roommates before? Share your strategies for success in the comments.