International Women’s Day celebrates the economic, social and political achievements of women around the world while recognizing the progress that still needs to be made. To honor the spirit of the day, Trulia analyzed the strides that women have made in closing the gap in homeownership, education and pay.

To examine the state of gender equality, Trulia analyzed the Census’ American Community Survey data from 2008 and 2015 to compare single, never-married women over the age of 24 years old to the same demographic of men.

Where Women Have Ways to Go

Looking at men and women in the 100 largest U.S. metros, it is clear that women are doing well in some places, yet not so great in others. Nationally, women are still trailing behind men when it comes to owning a home and bringing home the bacon.

Where Women Are Winning

Although these statistics seem grim, there are signs for a brighter future. All across the U.S., we see markets that have made positive changes on the side of gender equality when it comes to pay and education.

While it is clear there is still improvement to be made, Trulia ranked the 100 largest U.S. metros by how far women have come to achieving gender equality with men when it came to owning a home, attending at least four years of college and getting paid. 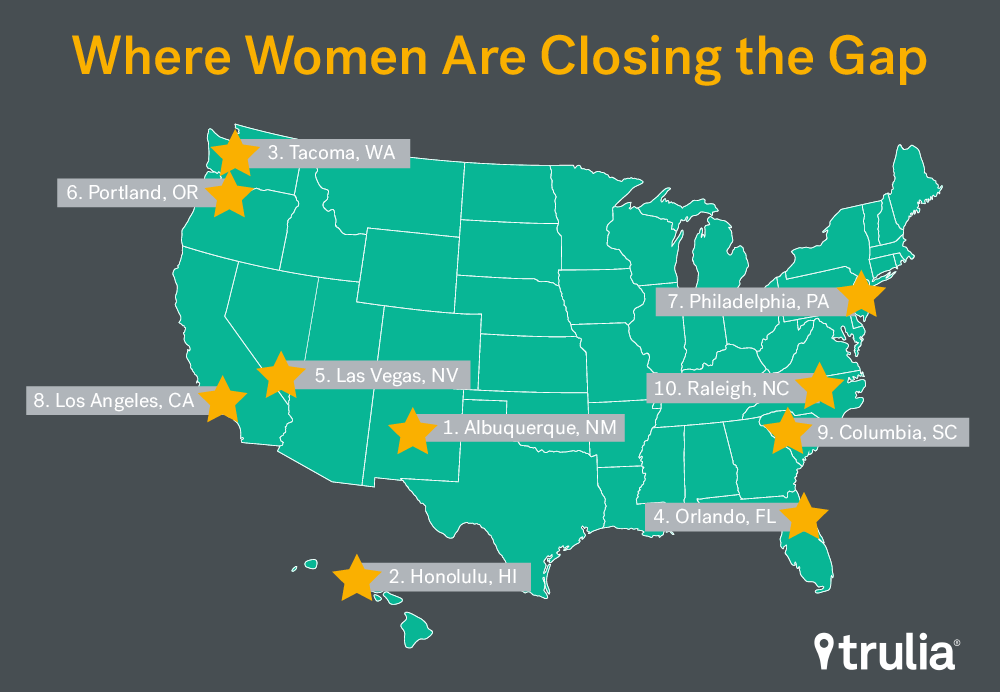 When looking at the national improvements since 2008, it is clear that women are poised for greater equality. #BeBoldForChange this International Women’s Day.

Using the 2015 5-year American Community Survey (ACS) microdata, we looked at the educational attainment of adults older than 24, as well as the home ownership rate of single, never married adults over 24 between men and women. For our look at pay gap changes, we compared the median income by gender of employed adults older than 24 using 2015 and 2008 1-year ACS microdata. This was done nationally and for the 100 largest metros for all 3 metrics.