It’s all too common: Someone falls for the high ceilings or the spalike master bath at an open house and thinks—This is it, where do I sign? But what about life beyond the front door? Sometimes it takes weeks or months in a new place to really get a feel for the block. Usually, it all works out fine: Newcomers get to know the neighbors and it starts to feel like home. But sometimes something just feels off, and it doesn’t get better. Maybe the neighborhood is too noisy—or way, way too quiet. Maybe the neighbors are nice enough, but talk about nothing but football…or preschool.

It happens. It happened to these people, who all came to realize that they had overlooked something essential about the community where they’d bought and were going to have to make a costly second move to put it right. 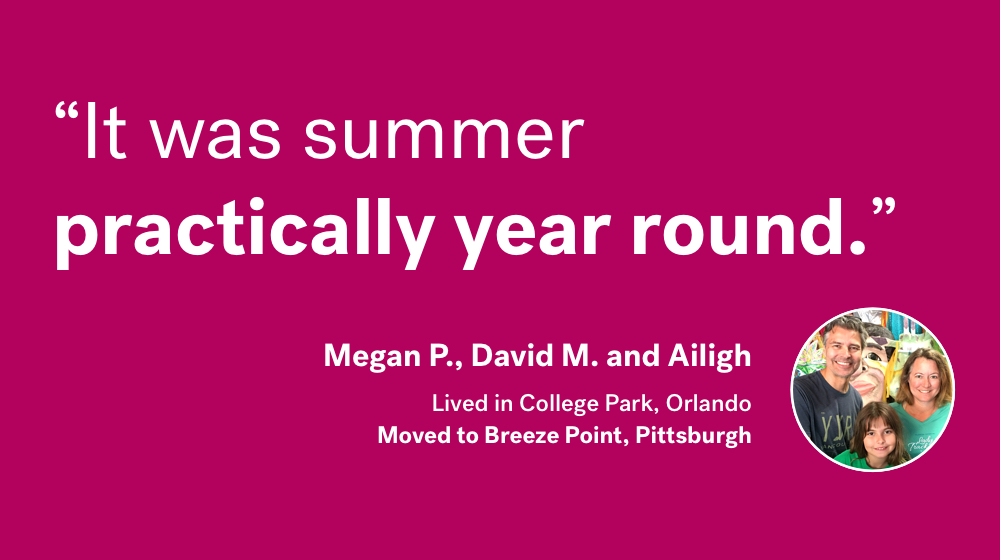 When Megan Padilla and her husband, David MacGillivray, sold their flat in Brooklyn and moved to Orlando for a job, the sunny weather was initially a selling point. As was the midcentury house in the historic College Park neighborhood that they bought. “I fell in love with that house, but the truth is I never quite felt at home in Florida,” remembers Megan. The couple pined for a New York City–caliber arts scene. And they wanted their daughter, Ailigh, now 8, to be involved with diverse cultures and activities. What they learned about Orlando is that the weather limited those options. “In hot climates, life takes place in backyard pools and at the lake,” says Megan. Watersports ruled. “We can do that stuff. It’s great stuff. It just isn’t our stuff all of the time.” 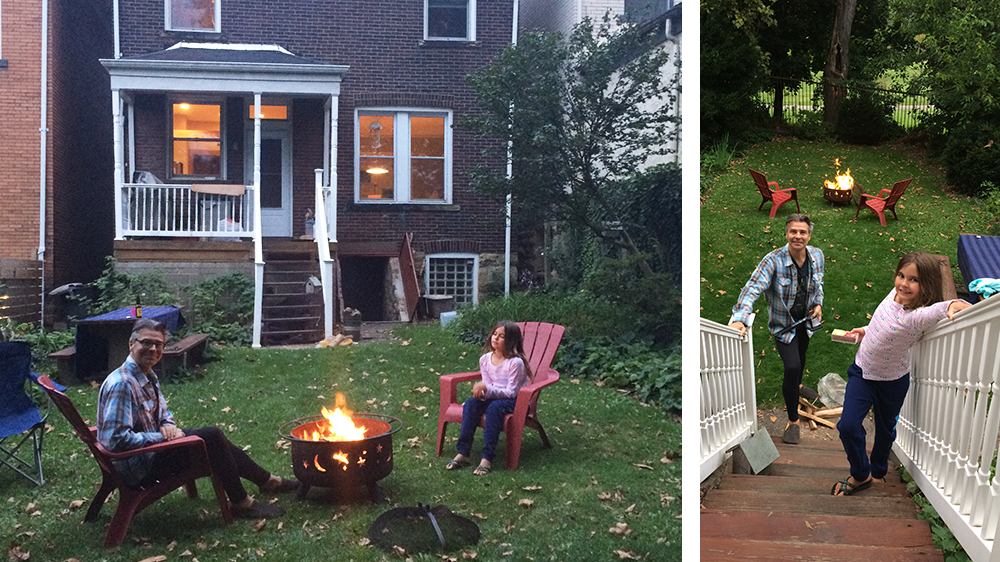 David and Ailigh in their new backyard in Pittsburgh’s Point Breeze, a friendly neighborhood with four distinct seasons.

Megan and David wanted a do-over. They realized that while Florida’s endless summer was alluring, they missed the creativity that they believe having four seasons ignites. “When we retreat indoors, we think, read, do things with our hands, and imagine what we’ll do when the snow melts,” Megan says. This insight led them to check out Pittsburgh, where they bought a home in the Point Breeze neighborhood. “Most people don’t have driveways in Point Breeze,” she says. “We thought that would be a minus. But it forces neighbors to interact.” Plus, their home abuts a cemetery that spills into an enormous greenbelt, Frick Park. “The other day, Ailigh saw 10 deer on our walk.” At night, the family makes s’mores around the backyard fire pit. “It feels like camping. The cool air smells sharp. We listen to the insects. It taps into our senses.” 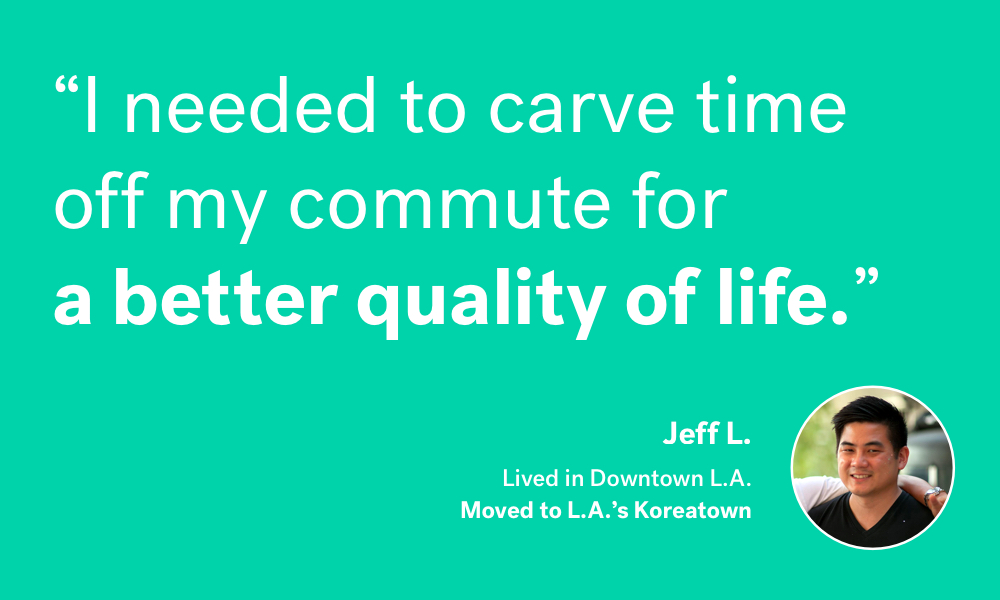 When Jeff Lai moved from San Francisco to Los Angeles two years ago, he didn’t even own a car. He was used to being able to walk, Uber, or take public transit anywhere he wanted to go. Looking back, he realizes that he naively chose to live in Downtown L.A. without thinking to factor in traffic. For a few months, he worked at home and everything was fine. But when he took a new job in Hollywood, he found himself with a three-hour-a-day commute. That’s when the importance of the city’s traffic patterns finally hit him. Digging into Waze and Google maps like the software engineer he is, he realized that because Downtown L.A. is at the interchange of five highways, including biggies like I-5, I-10, and 101, it creates a traffic blob, not a flow. There was no surface route or freeway that would give him his life back. 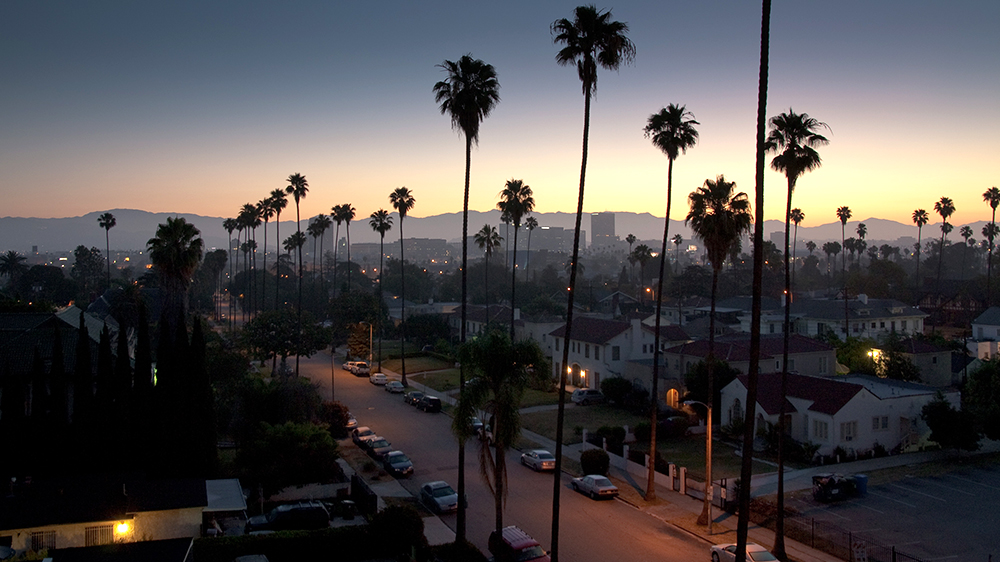 Koreatown is convenient to Downtown and Hollywood and has a vibrant food and nightlife scene of its own. (Photo by Shawn Lipowski)

Jeff’s calculations and plenty of test drives at all times of day pointed him to Koreatown. It’s only 5 miles closer to his job than downtown, but the move has saved him an hour of commute time per day. And he’s still close enough to friends who live Downtown to see them easily on weekends, unlike some other neighborhoods he’d looked into on the west side. The one aspect of his life he didn’t factor into his algorithm is dating. Love doesn’t always work out in L.A., he says, and not because there’s no chemistry. “Your potential match could live on the wrong side of some seriously bad traffic.” 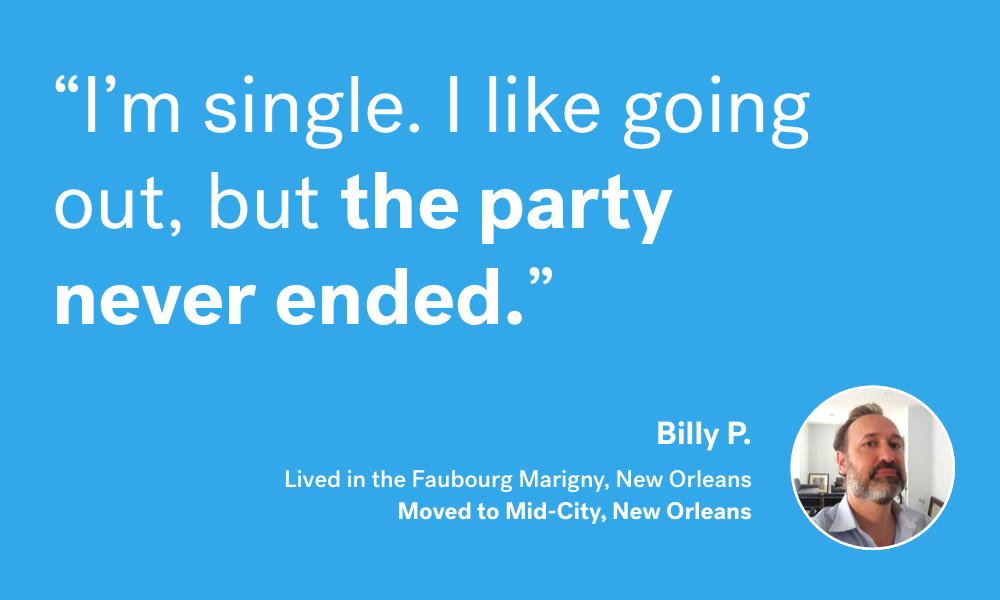 It wasn’t unusual for Billy Patout’s doorbell to ring randomly at 2 a.m., or for him to fall asleep to the blaring of a brass wind instrument well past 3. After all, he had bought a townhouse in the Faubourg Marigny, next to New Orleans’ French Quarter. His place was just a couple of blocks from Frenchmen Street, where live music pumped out of the clubs every night of the week. Initially, the move made perfect sense for this single guy. “I was spending a lot of time in the Quarter and on Frenchmen anyway, so I thought, Why not?” He walked the blocks around his new place often, so often that he quickly began to run into familiar faces. “At first, that seemed quaint and charming. But then it was like they were always there … kind of … stuck.” When a simple afternoon work errand became an all-night adventure, Billy decided to relocate. 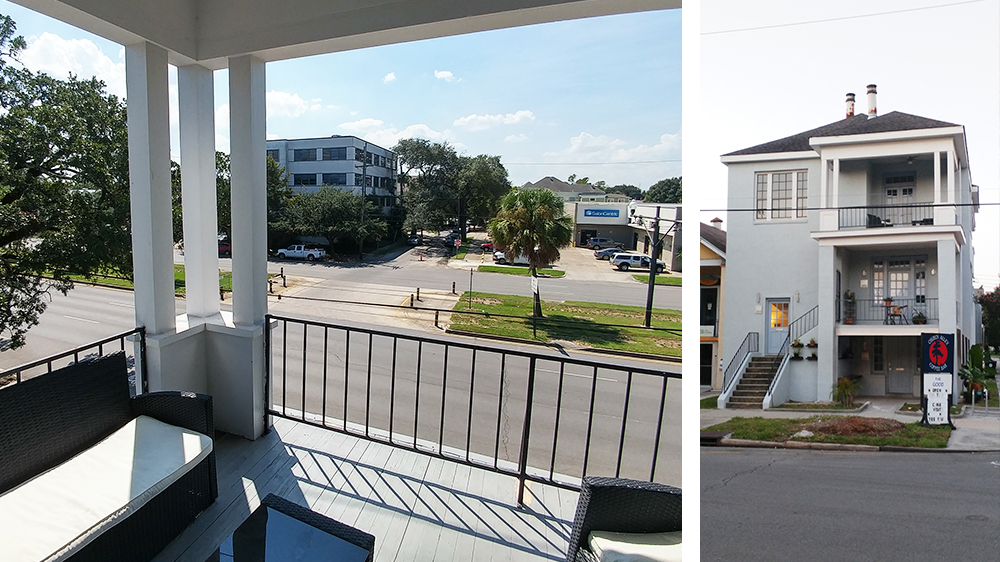 Billy’s new building in Mid-City is along Canal Boulevard, where streetcars roll by bound for the French Quarter.

About 18 months ago, Billy bought a three-story building in up-and-coming Mid-City, a neighborhood of 20th-century Camelbacks and Shotguns that borders Bayou St. John and City Park. Restaurants and wine bars are opening, and a coffee house called Church Alley has leased the first floor of Billy’s building. Yes, the bars roll up earlier. “But I didn’t have to move to the suburbs to get away from the noise. You can find an in between. I have a place that’s urban, but it has a lot of amenities of the suburbs without having to be remote.” Below his new place on Canal Boulevard, a grand old New Orleans thoroughfare, streetcars roll by bound for the French Quarter just 2.5-miles away—a comfortable distance for Billy. 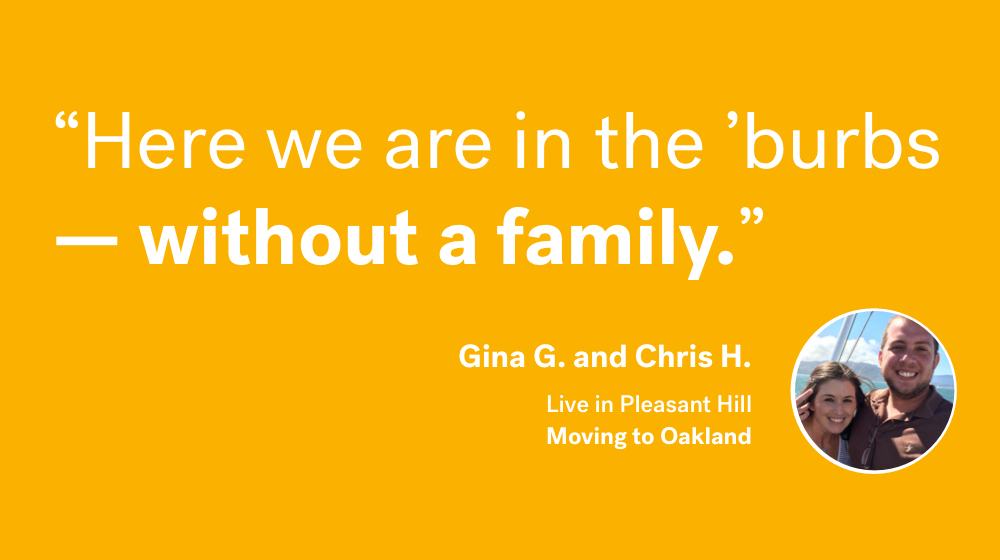 Northern California’s Pleasant Hill may be the perfect fit for Gina Goff and Chris Hardcastle—someday. Trouble is, they live there now. The newlyweds say they jumped the gun when, last year, they bought a 1980s suburban home 27 miles from San Francisco, where they’d been sharing a studio. The apartment was definitely too cramped, says Gina: “Have you ever taken a conference call in the closet so you don’t wake the other person?” So, they looked for a home with the future in mind. “We bought in Pleasant Hill because the schools are highly rated, just in case we have kids,” she says. “The problem is, I really don’t want to have kids any more than I did when we moved there.” Gina and Chris like to go out and get together with friends, but their current neighbors are too busy putting their kids to bed for that. “Even if I got pregnant tomorrow, the child wouldn’t be school age for six years. It seems like a long time to live somewhere that doesn’t make you happy, doesn’t it?” 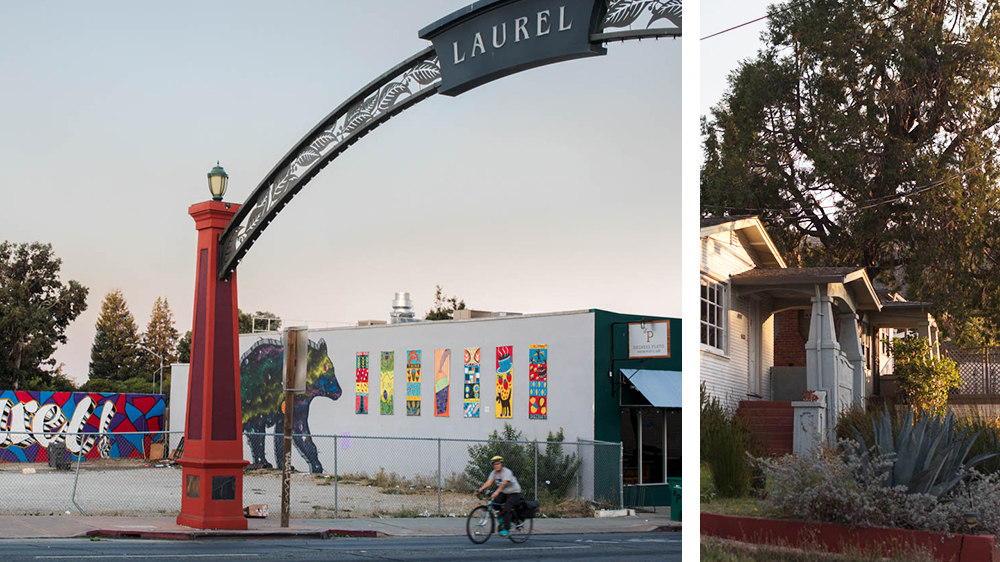 The Laurel, in Oakland’s foothills, has a diverse population, traditional bungalows, and a good mix of retail.

Where they’re looking to land

Gina and Chris are jumping ship—their home will hit the market in January. This time around, they’ve narrowed possibilities based on what is, Gina explains. “I’ve learned not to make housing decisions based on ‘what if’ scenarios.” Neighborhoods in the Oakland foothills have risen to the top of their list, including Maxwell Park, Laurel, and Upper Dimond, where “there’s a mix of families and people like us.” Each up-and-coming neighborhood is anchored by a main street where new restaurants have opened alongside old-school retail like shoe repair shops. Moving twice in such a short time is expensive and time consuming, but Gina and Chris have decided it’s worth it. “We’d rather live a house that fits our actual lifestyle, not what we’ll need in 10 years.”

Have you had any second thoughts about where you bought your home? Share your story in the comments.