Most of us have daydreamed at one point or another of someday tucking away into our very own cabin in the woods.

Here’s the ultimate dream: Sitting on nearly 40 acres, this $2.9 million, 690-square-foot compound in La Honda, CA, is surrounded on two sides by Portola Redwoods State Park. According to the listing agent, Quetzal Grimm, it was designed by George Jewett, a prominent architect in San Francisco with a singular vision of what this property could be for its inhabitants and guests.

A longtime member of the Bohemian Grove, the owner sought to re-create the same prestigious, collegial, and inspirational vibe in abbreviated form on his own property. For the uninitiated, Bohemian Grove is a secretive, storied men’s club in Monte Rio, CA, the ranks of which have included U.S. Presidents Herbert Hoover, Ronald Reagan, and Richard Nixon. Given his professional eye, the owner has endeavored to make design a focal aspect of the woodsy retreat, harmonizing the structures dotting the property with their surroundings in a beautiful way. 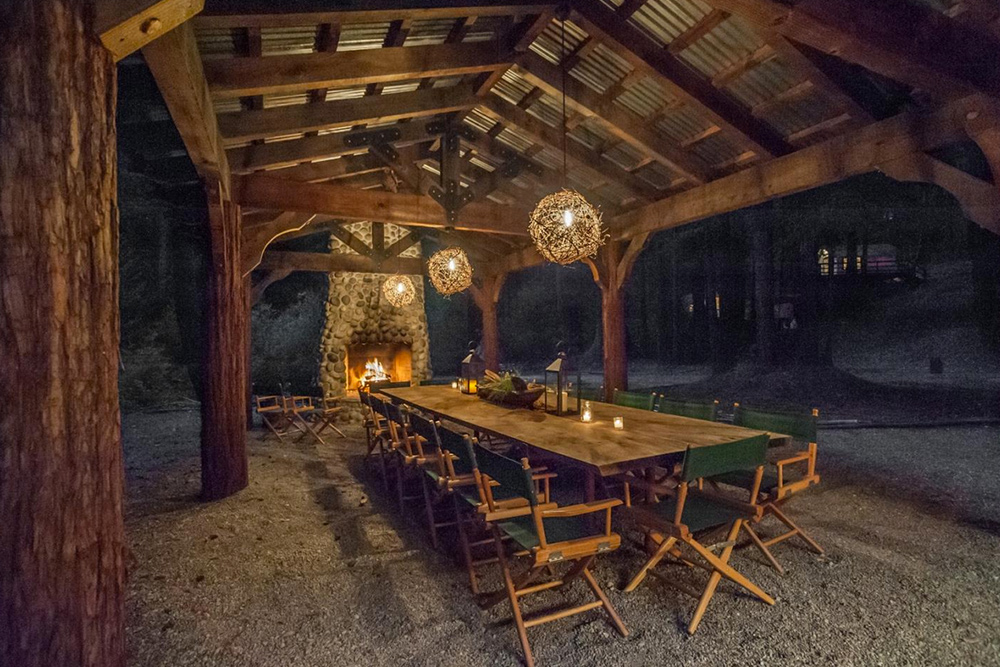 Down a short trail from the main house is the dining and entertainment pavilion, where residents and guests can gather with the same sense of camaraderie, surrounded by California’s majesty in its truest form. Evoking a handsomely outfitted, first-class campsite, a massive wooden table sits at the center of the open-air pavilion under working electric pendant lights and flanked by a large river-rock fireplace. 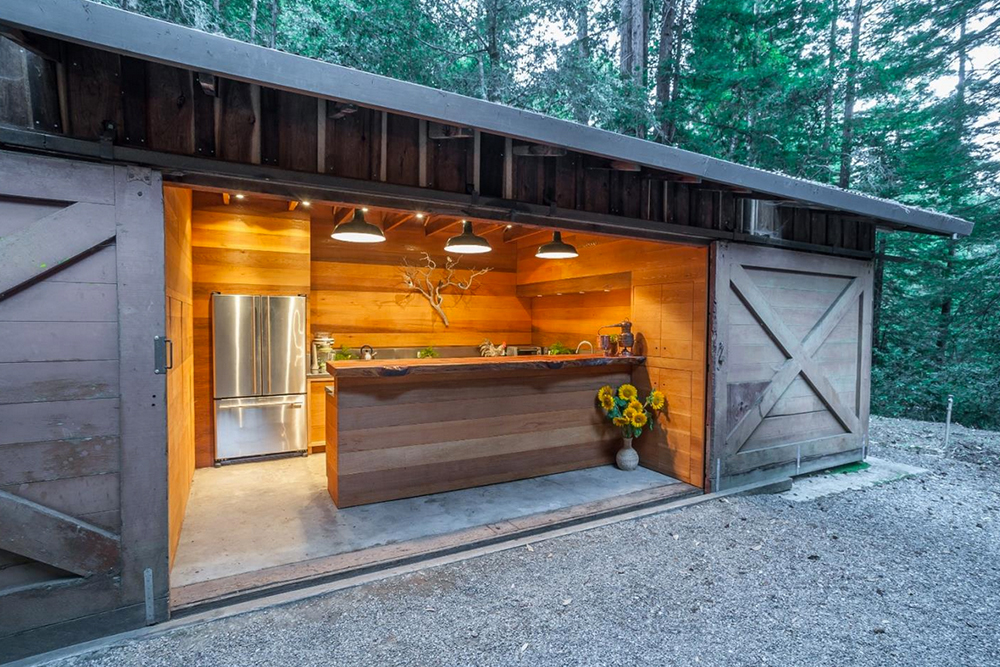 The meetings of the minds or long-extended dinners held at the pavilion don’t come serviced by long treks from the main house with armfuls of picnic baskets — alongside the dining clearing is a full, five-star kitchen equipped with top-tier appliances and the architect’s impeccable design in single-pour concrete countertops, stainless steel fixtures, and native, visible-grain wood. 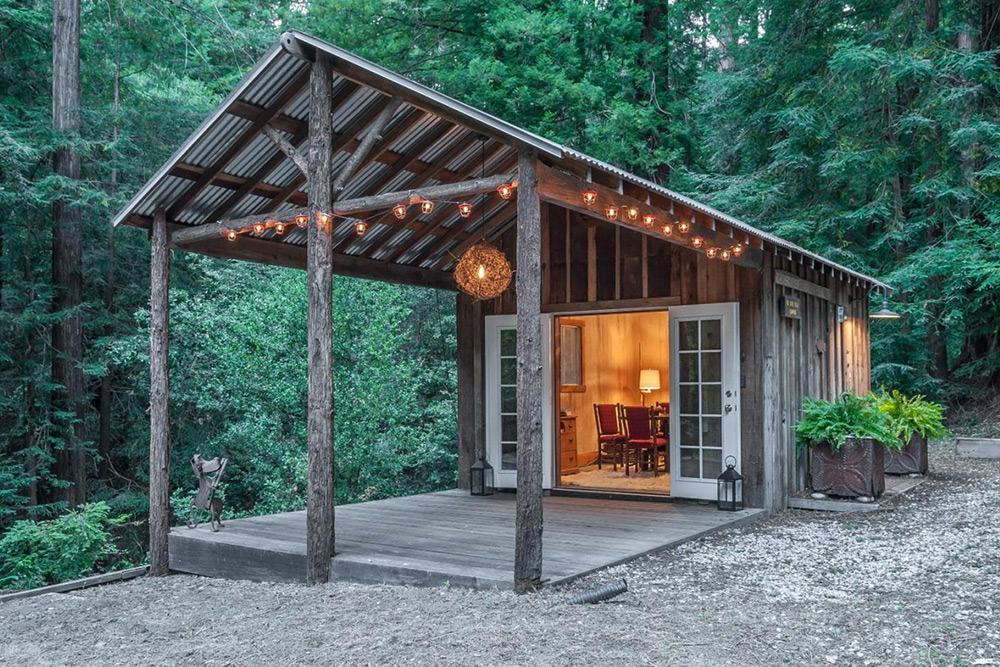 The Game Room is housed in its own cabin, tucked away down another short trail. The cozy hideaway features a large front porch, and inside, a table for any kind of analog challenge, surrounded by the same warm, native wood accents under a canopy of trees outside. 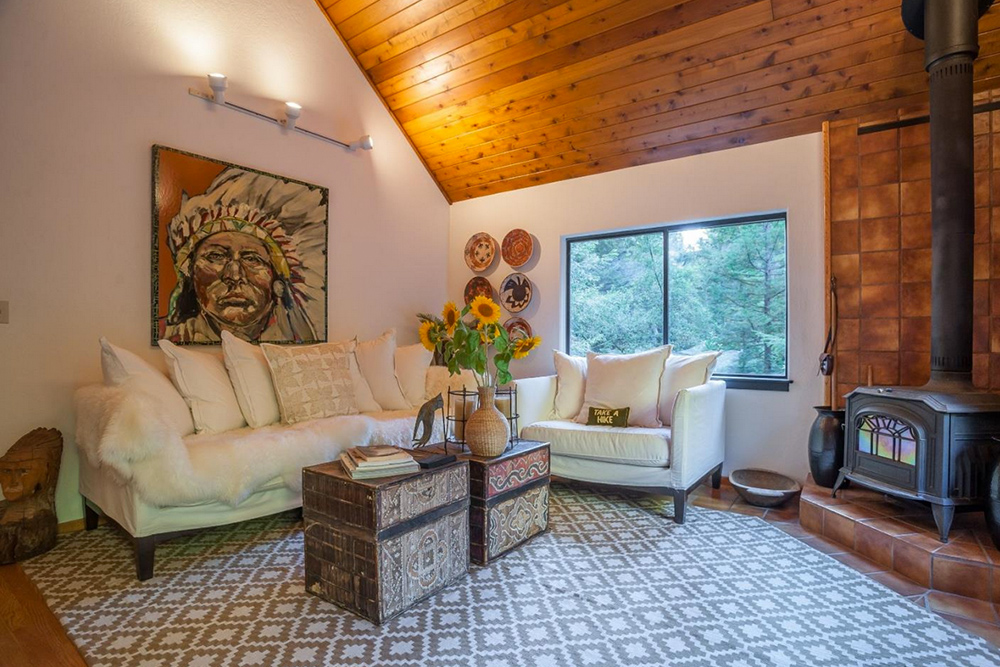 Back at the main house, you’ve got a crash pad with two bedrooms, bathroom, kitchen, and dining area with additional warmth provided by the wood-burning stove — plus a retro-style barrel hot tub surrounded by redwoods right out back. 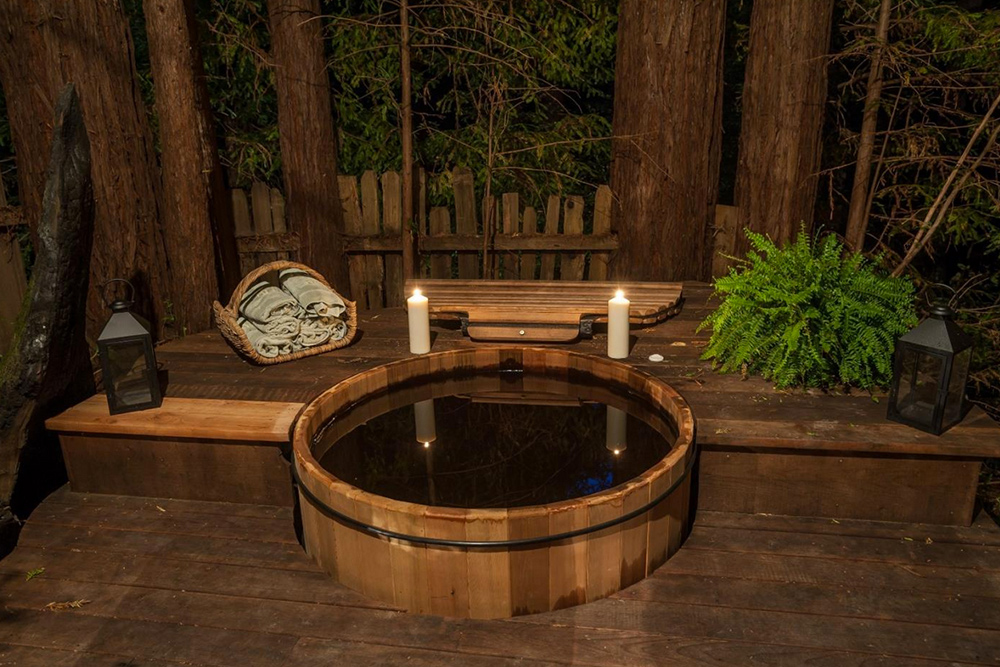 The barrel reference is an apt one, considering that, according to the listing agent, a former owner was a cooper. In keeping with the owners’ commitment to harmonizing the property with the surrounding forest, wood plays a key role in the design of the house, mixing cedar in the bathrooms, as well as salvaged timber from the property itself. 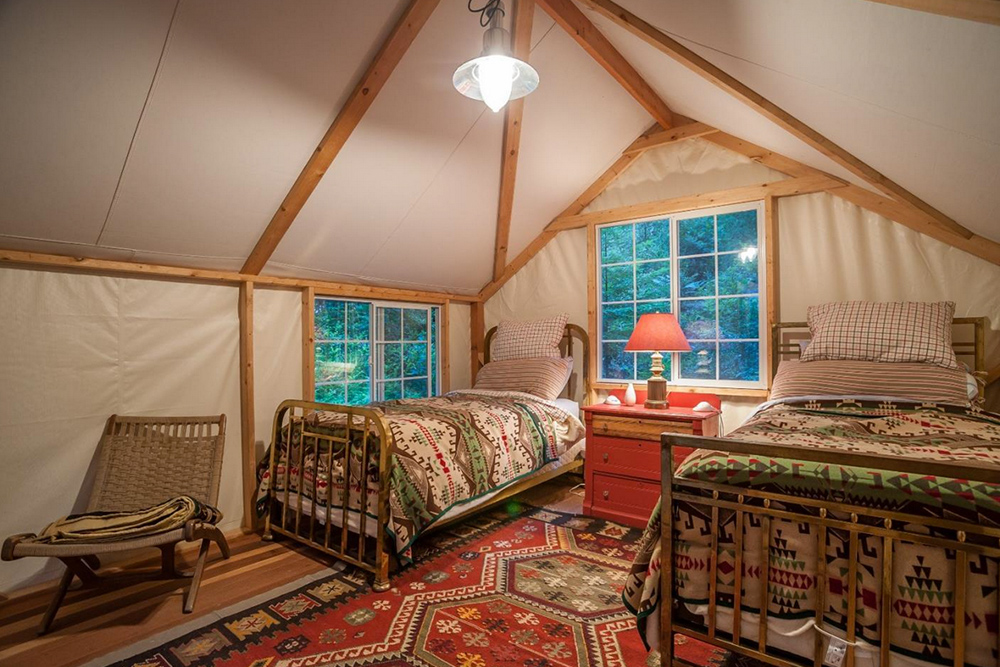 The Game Room cabin leads to what’s known as the Lower Retreat Area, which includes four tented cabins on redwood platforms — with full electricity and a design scheme that’s slightly different from what you may have been used to as a kid — and a teepee. 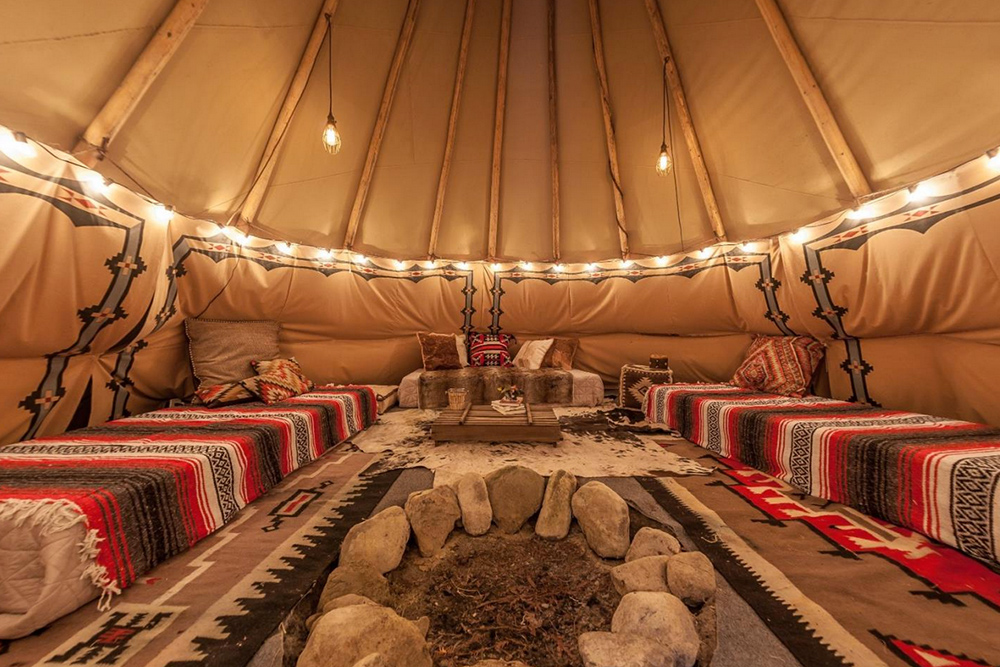 The teepee, designed as an authentic replica (smoke flaps and all), overlooks the lower gathering area, providing a bit of extra shelter against the evening. Those who wander in will probably feel compelled to kick off their shoes and hunker down on the saddle blankets and fur throws strewn around a stone fire pit. Once again, full electricity keeps glamping in California easy and cozy. 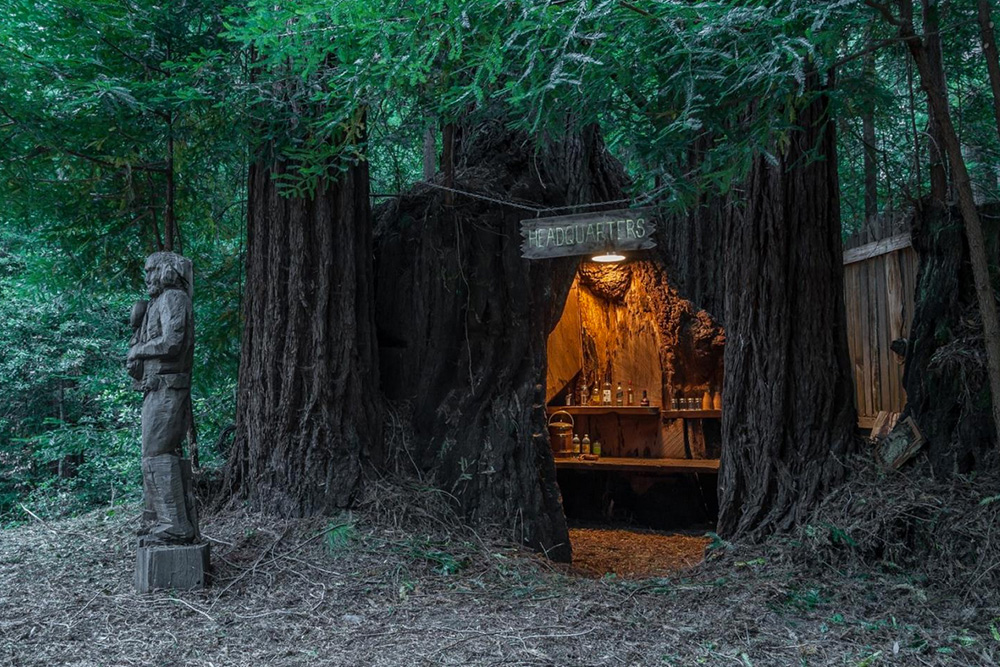 The heart of the compound may be easily missed, if you’re not looking — in the hollowed-out trunk of a massive redwood sits Headquarters. Nothing fancy here; just an everyday, humdrum, handcrafted cubby (everyone has one of these, right?) that almost looks as if it had been carved by a gang of animals. A carved totem stands guard outside to enforce the rules of the property. 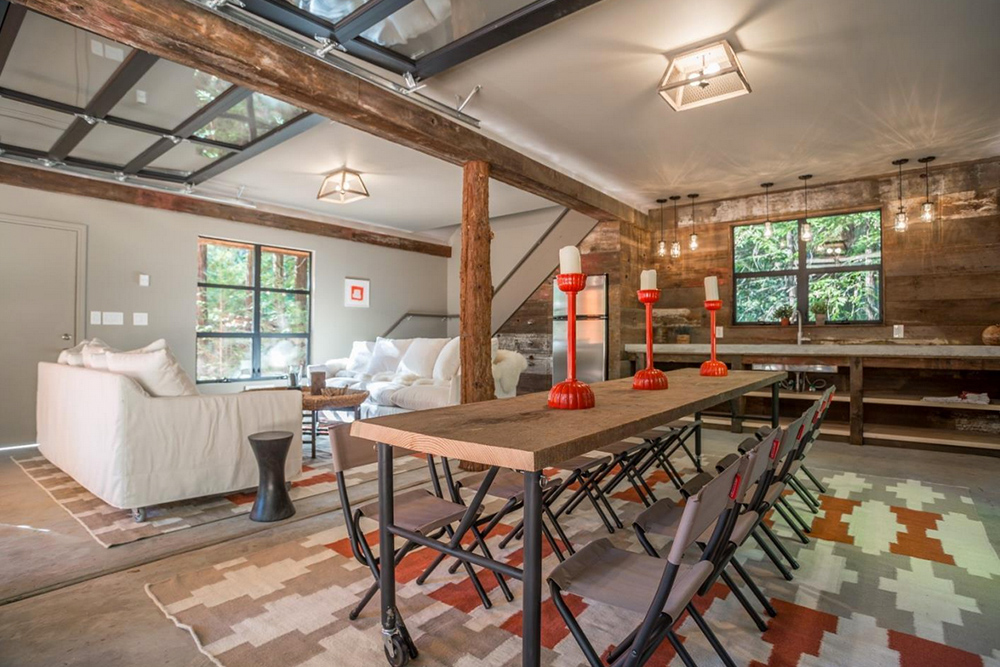 Even the garage doesn’t skimp on the tricked-out details. The oversized two-car garage also houses an open-floor-plan kitchen and dining area, with a sleeping loft upstairs. Exposed beams and more of that salvaged wood tie the design together, and the space serves as a shelter just steps from the on-site bandstand and stage.