If everything you know about Baltimore comes from The Wire or Serial, you might be missing the bigger picture. The grim version of Baltimore portrayed in those popular series doesn’t do justice to this beautifully historic, delightfully cultural, and truly livable city. And Baltimoreans are so eager to spread the word about their beloved hometown, they’re offering serious housing incentivizes to those willing to commit to Charm City.

It’s an appropriate nickname. Baltimore’s famously charming rowhouses are at the center of the city’s Vacants to Value program, which has been restoring the homes and helping first-time homebuyers purchase them since 2010.

It’s a big help for first-time homebuyers in a tight real estate market. The median home list price for the Baltimore Metro area is up 2 percent year-over-year to $300,000. And while housing inventory is up 6 percent over last year, that’s a fraction of the inventory recovery happening elsewhere: nearby cities Washington D.C. and Silver Spring, Maryland are up 21.9 percent and 16.2 percent respectively, and the similarly-sized Portland, Oregon’s inventory is up 21.5 percent.

Think you might want to take advantage of this special program for first-time homebuyers?

In a nutshell, Baltimore’s Vacants to Value gives eligible homebuyers $10,000 towards closing costs for the purchase of a formerly vacant home. A wealth of other city- and business-sponsored incentives are available too, which can add up to tens of thousands of additional dollars towards restoration costs—the only catch is that the buyer must be the primary resident of the home for at least five years after the closing.

Why the generosity? Vacants to Value is the brainchild of former Baltimore Mayor Stephanie Rawlings-Blake and other city employees. Their goals were to help residents build wealth by helping them purchase properties in their neighborhoods and to attract new residents—and it’s been a huge hit.

“A lot of what Baltimore has done is cutting-edge in the urban development field,” says Tammy Hawley, chief of strategic communications for the Baltimore City department of housing and community development. “We are working towards deleting blight; we are streamlining bureaucracy—selling properties in receivership, getting places up to code, and into the possession of hard-working Baltimore residents.”

How far does that $10,000 go toward the total cost of a Vacants to Value home? While many of the blighted rowhouses have a listing price in the $5,000 to $10,000 range, after a city-managed renovation, the sale prices land around $100,000 to $140,000 (less than half the median list price for Baltimore Metro homes)—meaning that $10,000 toward closing costs can represent a sizable portion of the total cost.

Jason Hill, 31, and his husband Nic Thornton, 36, were lured to Baltimore by the Vacants to Value program. “About five years ago, friends of ours started looking here, and we frankly thought they were crazy,” says Jason. “Then we realized that for the price of a crappy studio in D.C., we could own a gorgeous, three-story home … and our $100,000 house here would be $1 million in D.C.!”

But first, they were in for a bit of a journey with their selected property in Baltimore’s Greenmount West neighborhood.

“When we first saw our house, in 2015, it had no roof, and it had a family of feral cats living in it,” says Jason. “We were lucky enough to pair up with a developer who had an in-house architecture team, and a dedication to green construction materials.”

Today, he and Thornton love to spend their weekends checking out cool restaurants and bars that are popping up all over Baltimore. “Nic collects clippings on all the new places we need to try,” Jason says with a laugh. “He’s the cruise director!”

And though they have an hour commute each way to their jobs in D.C., the Amtrak station is a quick walk from their new home—a larger and more perfect-for-them home than they could have afforded anywhere else.

“Baltimore has a slew of great programs,” says Jason. “We are both highly indebted student-loan carriers, with no assets—the efforts of the City of Baltimore made homeownership a possibility for us in a way we never could have done on our own.” 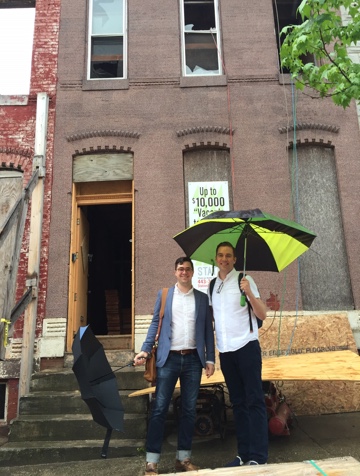 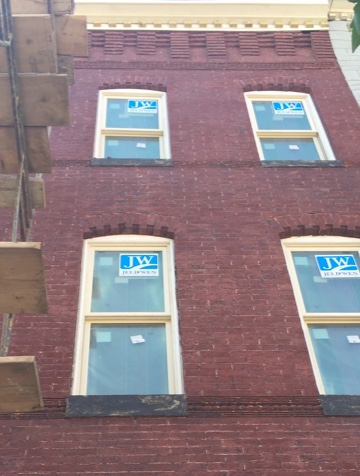 Jason Hill and Nic Thornton purchased their three-story Baltimore rowhouse for a fraction of they would have paid in Washington, D.C. where they work. 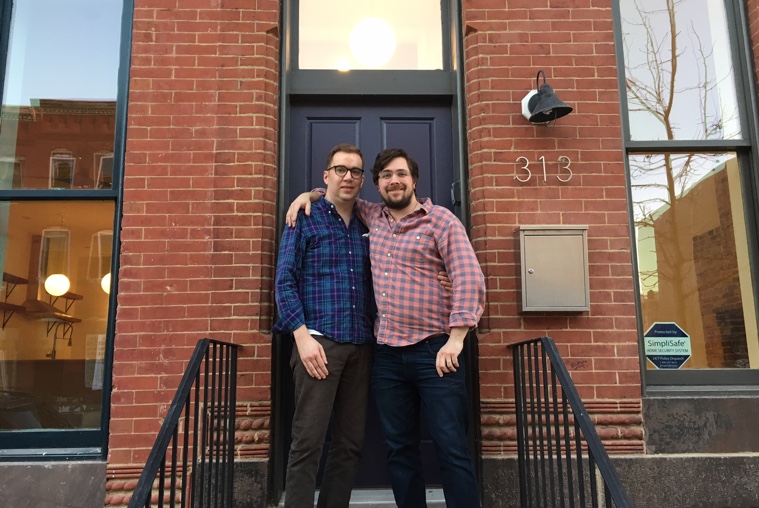 What was once a roofless shelter for feral cats is now Jason and Nic’s gorgeous new Baltimore home.

One of the most innovative aspects of Vacants to Value is that while it does invite outside investment, it also focuses on growing wealth for existing residents. Ernst Valery—the managing partner of SAA|EVI, an urban-development company who works closely with the city to renovate vacant rowhouses says his primary focus is “investment without displacement.” Offering existing residents a pathway to homeownership is good for them, and it’s good for Baltimore.

Ernst compares giving Baltimoreans the opportunity to invest in their own city to allowing startup employees to invest in their company early on. “The way I see it, Baltimore City is currently ‘pre-IPO,’ and when it goes on the open market, it will be too late for low- to middle-income families: They will be priced out just like they currently are in cities like D.C., New York, San Francisco, L.A., and even Miami,” says Ernst. “This is a paradigm shift—and it’s so exciting to be a part of it in Baltimore.”

One of the newest Vacants to Value homeowners is Kiona Pearson. Unlike some other beneficiaries of the program, she earned the restoration of her three-story rowhouse in the Woodbourne-McCabe neighborhood the Habitat way—through a year’s worth of sweat equity, contributing labor to the renovation of homes all over Baltimore with Habitat for Humanity of the Chesapeake, including her own.

“I moved into my house in February, and absolutely love it,” says Kiona, who grew up on the other side of Baltimore. “At first, I was a bit trepidatious—I’m pretty much a girly-girl, and on my very first day, we were mixing mortar! By the end, though, I was a whiz with the screw drill!”

And she had no small job in front of her. When Kiona first saw her house, it was a shell—it had no roof, and there was a board over the basement to prevent treacherous falls. “Now it is beautiful, and so quiet,” she says. “I love it here.”

Kiona now encourages all of her friends to take advantage of the program while properties are still available. And that goes for out-of-towners, too. If now’s the time to invest in a growing, vibrant Baltimore, anyone with East Coast dreams might want to consider getting in on the ground floor. With $10,000 available—and potentially even more—there’s no time like right now. 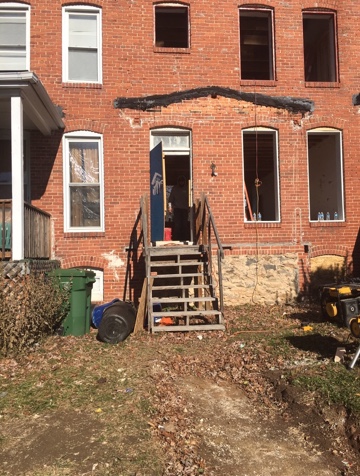 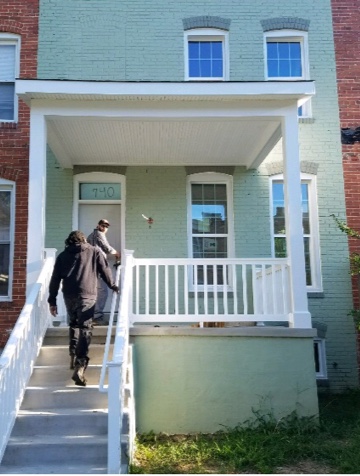 Kiona Pearson invested a year of work renovating Baltimore homes with Habitat for Humanity of the Chesapeake, including hers. 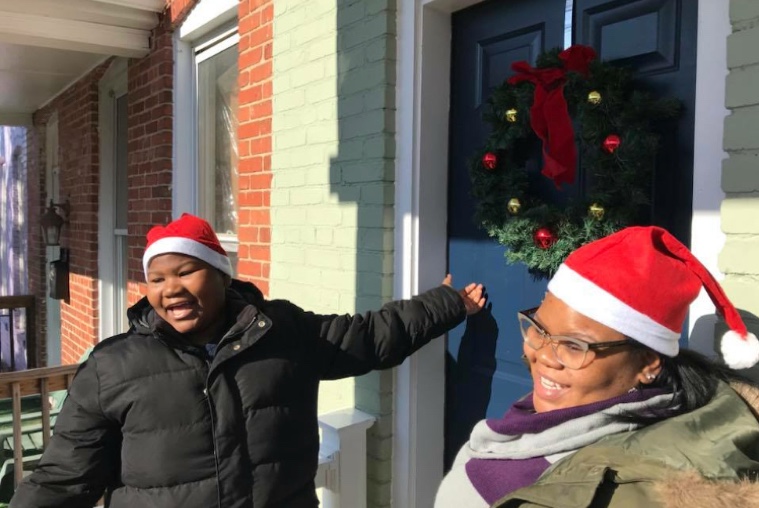 Lifelong Baltimore resident and new homeowner Kiona love her home and recommends the Vacants to Value program to everyone.

Envisioning yourself in another city? Check out what’s available in your future hometown on Trulia.

The inventory and median home list price data come from Trulia’s inventory report. For our inventory metrics, we take a snapshot of listings each Wednesday in the middle month of the quarter. Quarterly inventory totals are based on the median of the count each Wednesday. Price is based on the median listing price of every active listing throughout the month. We measure affordability as the share of income needed to purchase the median-priced home, assuming a 20% down payment and the average 30-year fixed mortgage rate in each quarter as quoted by Freddie Mac in its Primary Mortgage Market Survey (PMMS). Household incomes are pulled from 1-Year American Community Survey (ACS) microdata. We inflation-adjust 2016 incomes to later quarters. We use 2016 5-Year ACS data to estimate property taxes and insurance rates.