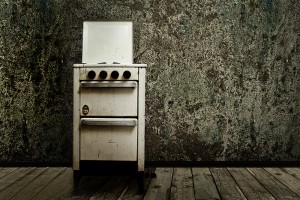 You never know what the previous inhabitants of your new home may have left you as a “gift.”

It was way older than me. It had numbers that didn’t follow any kind of known logic. And it looked like a Chernobyl waiting to happen. But my previous landlord insisted that this was a perfectly good (but super-old-school) microwave — plus, it was attached to the kitchen cabinets, so it was there to stay.

Every home has that quirky thing you always have to explain to your guests. “Yeah, that’s from the people who were here before me.” What was once their “gift” to the home has now been “regifted” to you.

While some folks would replace that avocado-green dishwasher, plenty of renters and homeowners have come to embrace their home’s quirks of residents past.

The phone to God

“We had planned to take it out, but left it up, because it is a huge talking piece when guests come over,” she says. “And when the family is driving me bonkers, I pick up the receiver and call God. ‘Hi, God, yup, it is me.'”

New Jersey–based RE/MAX agent Ryan Gibbons found that his home came with a bunch of never-finished projects. “There had been a great slate patio in the back, and what did he do?” says Gibbons of the previous owner.

“He ripped out the slate and left the concrete behind for me to rip up. He also removed the beautiful screens on the back porch and left half-rotting wood. All this work and money to replace what he ripped out for no apparent reason.”

Cabinets that cut the mustard

Connecticut-based William Raveis agent Dylan Walter recalls a client who purchased a house with mustard-colored cabinets in the kitchen. The clients planned on renovating the house postclosing anyway, but then their builder let them know that specific style of cabinets had a fan base — and they could be resold for a pretty penny.

“They were complete with functioning button handles on the cabinet doors, so they turned out to be worth even more,” Walter recalls. “At first they thought it was just going to be a nasty, throwaway kitchen, but it turned into quite a nice little closing gift for my clients!”

While attending college in Oakland, CA, SimpleBra founder Madhavi Jagdish and her friends rented a house that included a few boxes left behind from the previous tenants. One of the boxes included framed family portraits — that Jagdish and her roommates decided to keep.

“We thought it might be funny to put these up and tell people that they were our family photos,” she says. “Thinking back, I realize it’s a bit creepy, but those people in the photos were part of our family for the year that we lived in that house.”

Red, white, and blue all over

Portland, OR, dog trainer Dawn Gilkison bought a house that turned out to be seriously patriotic. The kitchen had red appliances, a red enamel sink, blue countertops, a blue carpet, and white walls. The room had another quirk, too.

“There is also a niche cut into one of the kitchen walls — with electric plug — with a toaster in it,” Gilkison says. “We ended up putting a bookshelf in front of the niche.”

What did the previous inhabitants of your home “regift” to you? Share in the comments.