Picture this: It’s the Roaring ’20s. An industrialist from Baltimore, MD, is looking for the perfect spot for his new home base, and he has some very specific requirements. Because although his business in the steel industry is legit, he also has a secret — he’s running guns and selling illegal liquor on the side.

Then he finds a piece of land in Annapolis, MD, along the Severn River, secluded and expansive, with daring views of the United States Naval Academy. The industrialist builds his massive estate on the site — including a secret underground vault that connects to a tunnel leading from the home to the river.

That’s the truth-is-wilder-than-fiction behind the construction of this luxurious $28.8 million estate for sale in Annapolis, MD. But that’s not the end of the story. 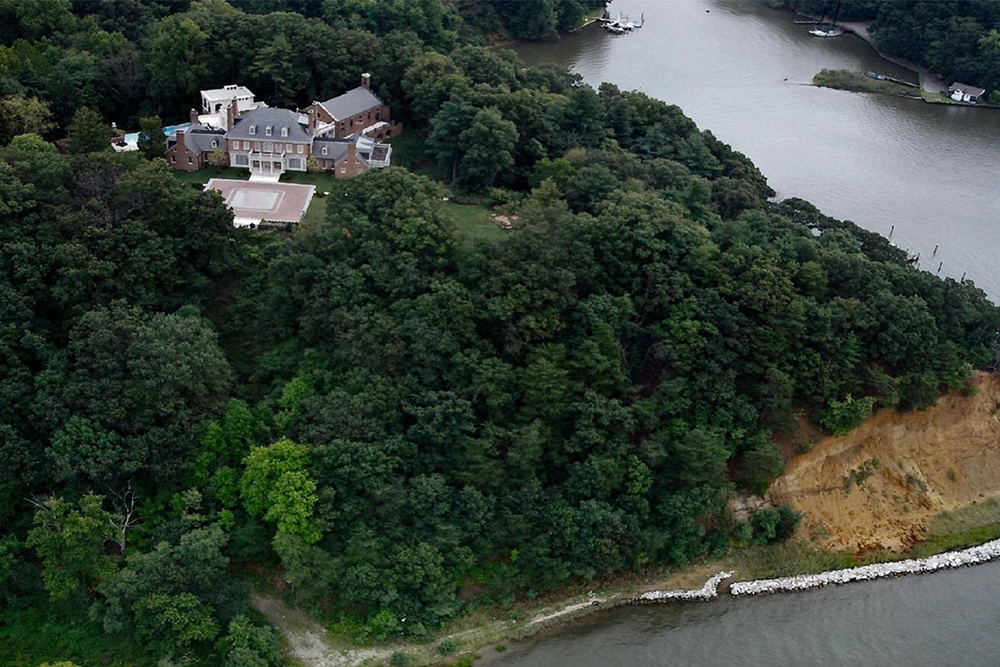 The 26,000-square-foot home sits on 23 acres along the Severn River, just 40 minutes from Washington, DC. It’s been renovated many times over the last 80 years, but its private location is what attracted the original owner — and, years later, the Catholic Church, which turned it into a Capuchin friary, and finally its current owners, who made it an expansive yet cozy family home. 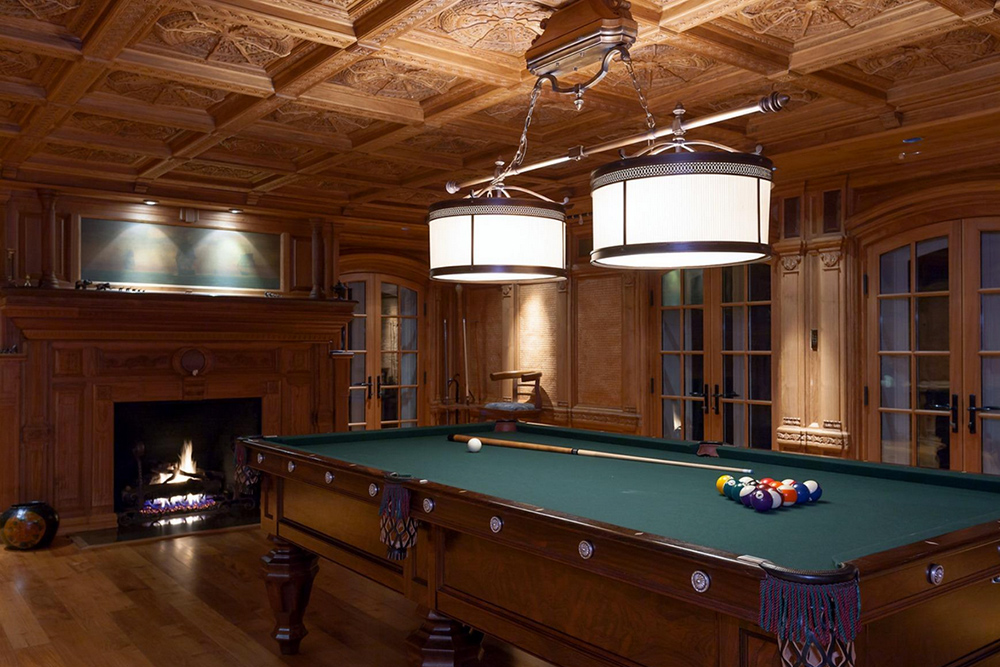 One big clue to the estate’s illicit past? That secret vault. “Supposedly, it was a tunnel that went all the way from under the house down to the river. We don’t know if it still goes down that far, but you can still get into the vault through the billiards room,” says listing agent David DeSantis, partner and managing broker, TTR Sotheby’s International Realty in Washington, DC.

But the billiards room no longer looks the way it did when the vault was built; it has since been paneled with hand-carved teak. “The entire room was hand-carved in Southeast Asia,” says DeSantis. “The ceiling, the walls, everything. It was measured to specifications, shipped to Annapolis, and then rebuilt in the house.” 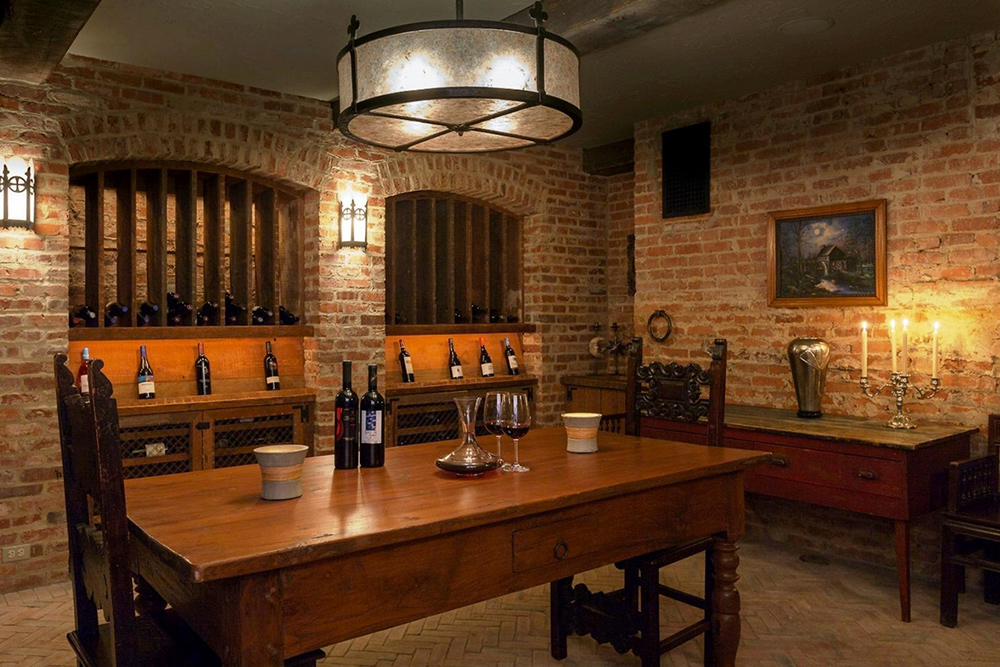 While we’d love to know what gems could’ve been tucked away in this wine cellar in the 1920s, chances are slim that any original items would’ve made it through the home’s many extensive renovations. “[The home] was pretty much uninhabitable when the current owners bought it,” explains DeSantis. “There were raccoons living in it.” 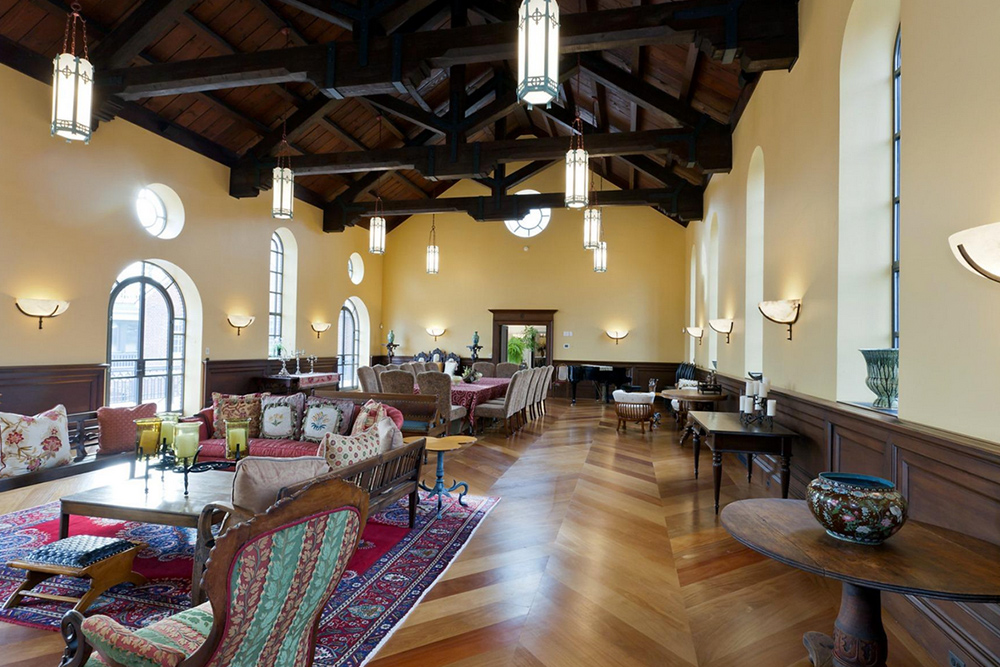 Saved from its sinful origins, the home was eventually purchased by the Catholic Church and converted into a friary. The vaulted ceilings in the ballroom (it once served as the chapel) are some of the last remnants of its religious past. According to DeSantis, about 25 to 30 friars lived here, sleeping in a dormitory that was torn down to build the home’s more recent spa wing, added by the current owners. 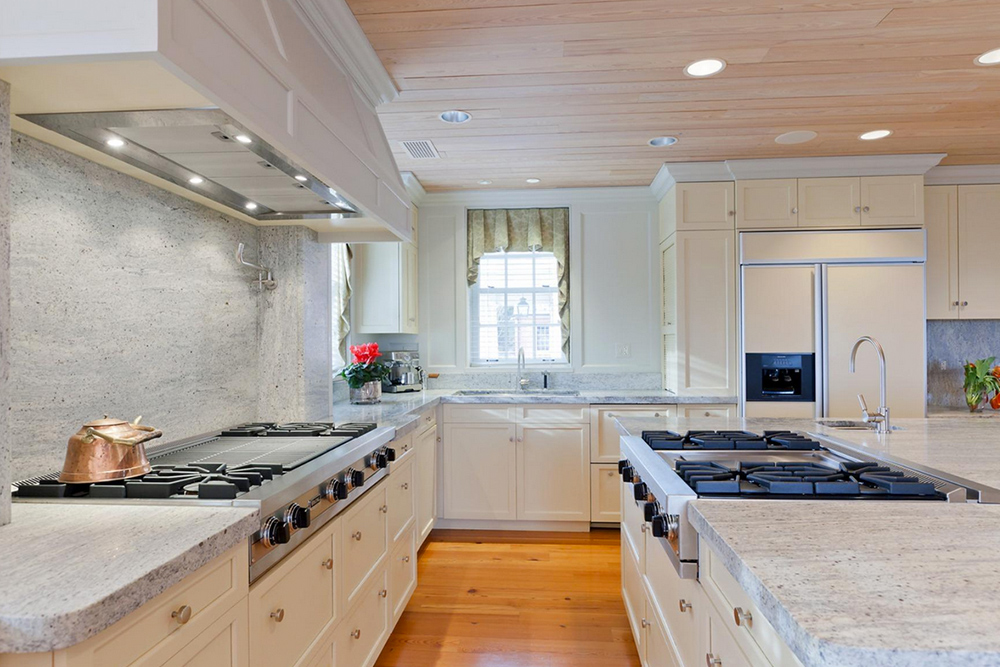 The current owners, who are in the seafood business, restored the estate, adding contemporary updates — including this cheerful commercial-sized gourmet kitchen. Although the home has been for sale for a few years as a private listing, the owners aren’t in a hurry to sell. (We can see why!) Buyers today might benefit from those days on the market; it was originally listed at $32 million, now down to $28 million. 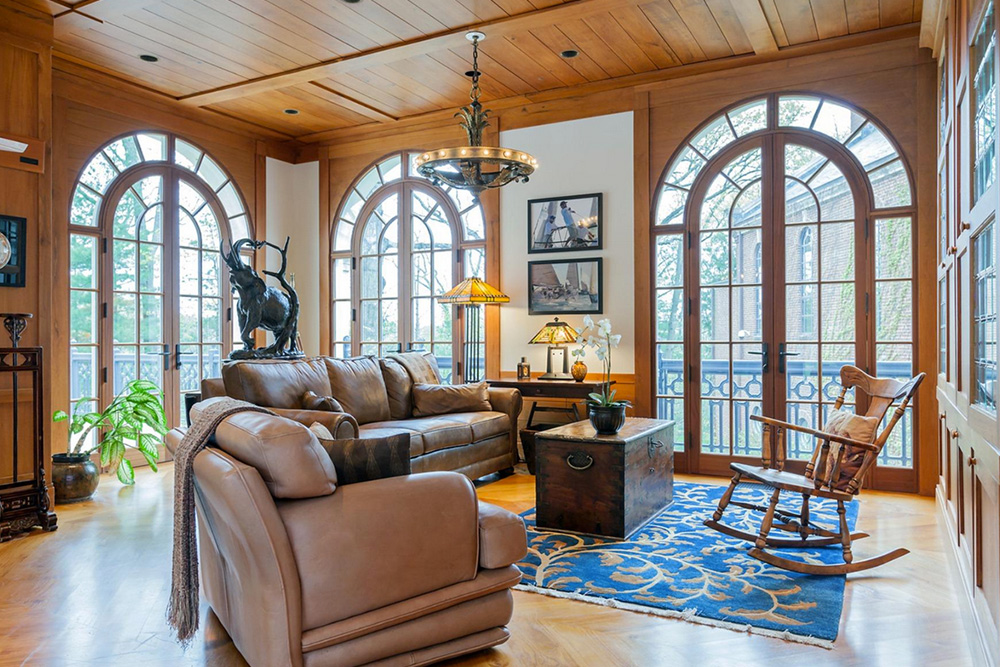 Rich wood paneling and comfortable furniture with antique accents, seen here in a trunk-turned-coffee-table and Windsor rocking chair, keep formal spaces casual. “[The owners] have been fishermen for several generations,” says DeSantis. “It was very important to them not only to restore the house to the grandeur that it once had, but [also] to reflect their sensibilities and be a house that was comfortable for them.” 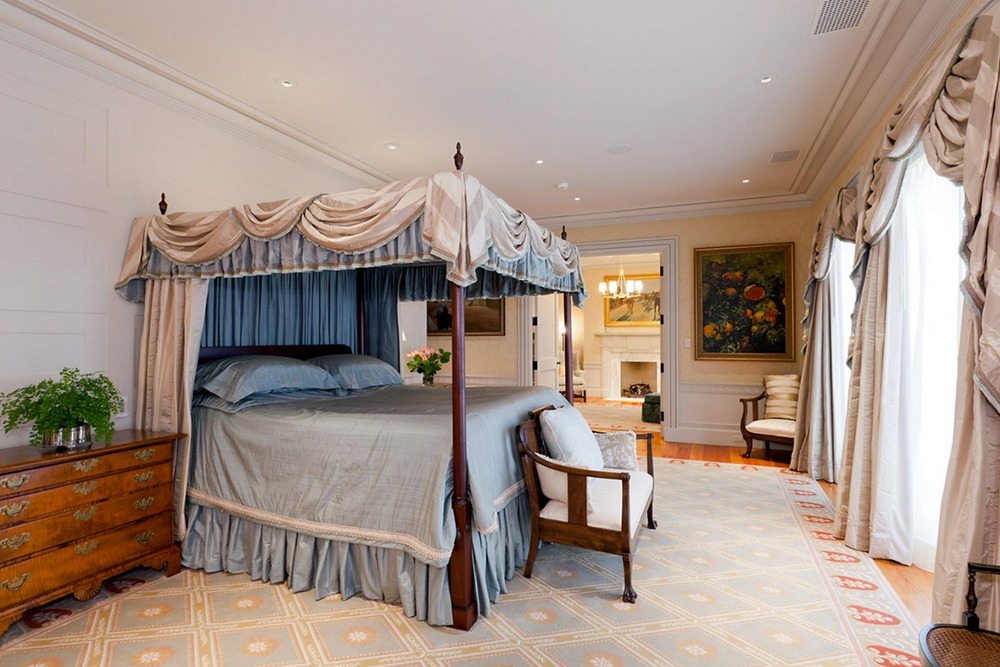 Instead of the massive friars’ dormitory, the home now has a more manageable seven bedrooms and eight bathrooms — including this light-filled room with paneled walls. In this bedroom, Old World meets New, with elegant drapery around the Colonial-style, four-poster bed frame and rich oil paintings that frame the entrance to an adjacent sitting room. 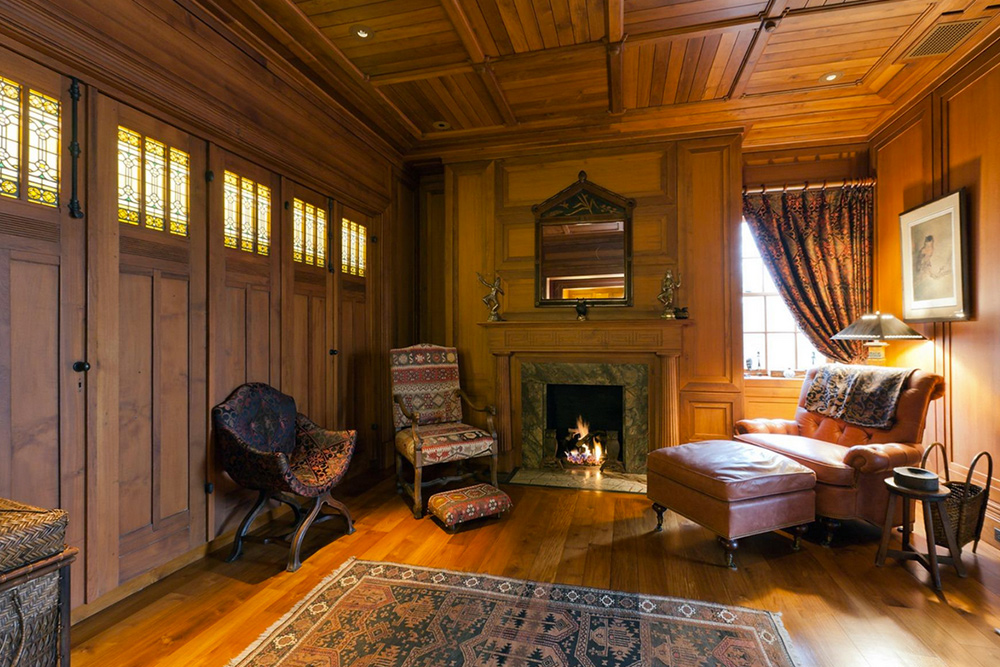 This wood-paneled sitting room is a spot for quiet contemplation — and cozying up by the fire with a good book. (Or perhaps writing one about the colorful history behind this piece of Annapolis real estate?)

The current owners replaced the dorm with a spa wing, which includes an indoor pool and elaborate baths. According to DeSantis, since the owners frequently travel to Asia for work, their travels inspired them to add Asian influences throughout their decor — like the dragon candlesticks in this shower. 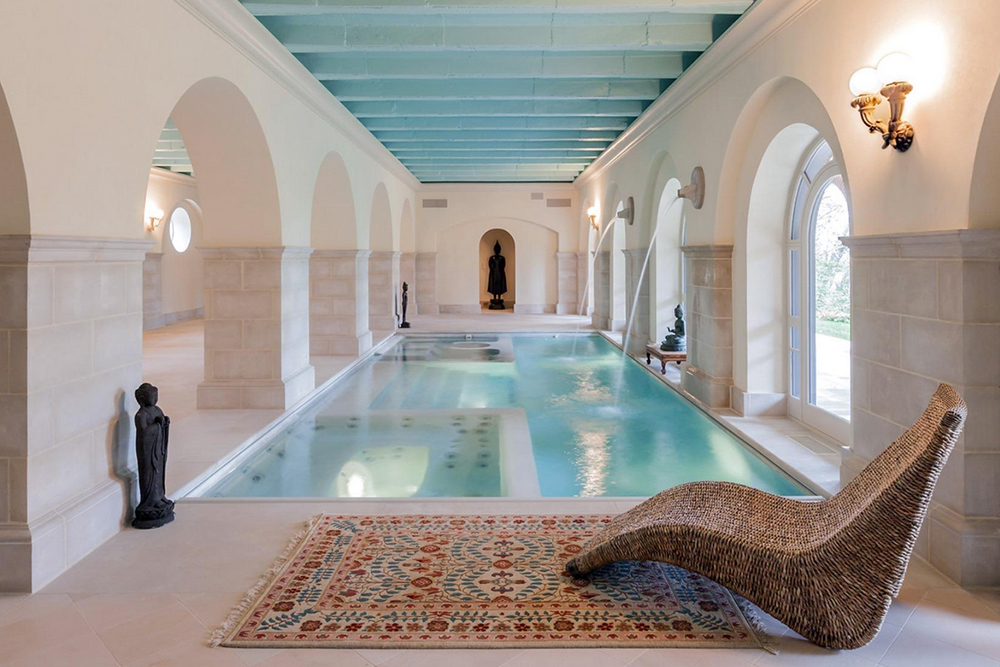 The Asian influence carries over throughout the spa wing, where a teaching Buddha statue, symbolizing the union of teaching and method, overlooks the indoor pool and spa. 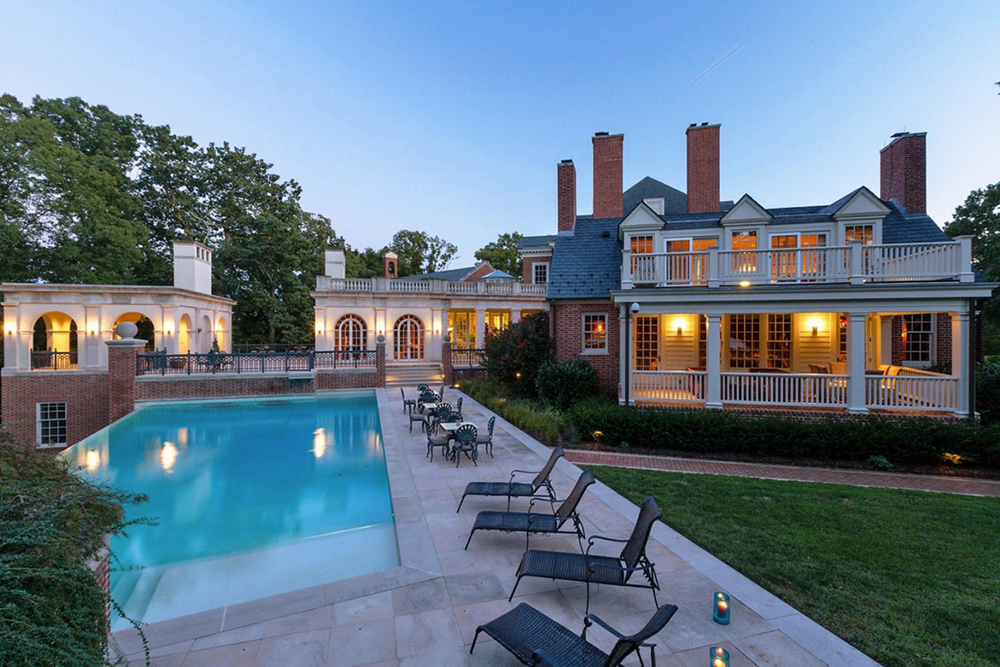 The back of the home overlooks a 60-foot infinity edge pool lined with chairs. To the left, a covered pool pavilion with an outdoor fireplace offers a sheltered place to relax. 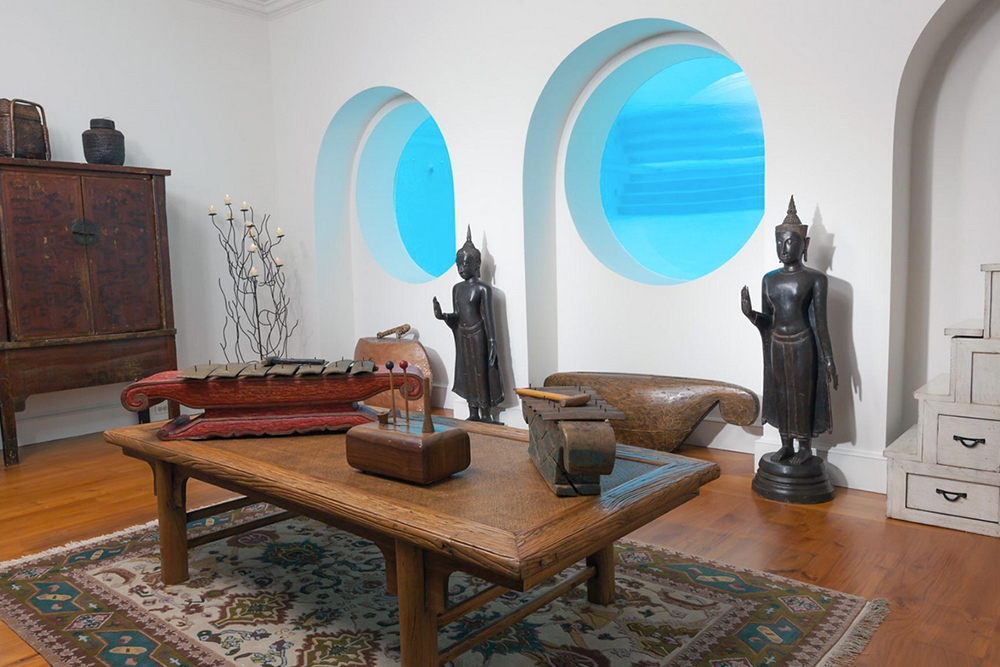 This room, called the Zen room, is part of the guest wing. The large, circular windows let in light and offer views of swimmers in the outdoor pool. “A lot of times when you go in very expensive homes, they have that feeling like a museum — where you’re uncomfortable touching anything,” says DeSantis. “This home doesn’t feel like that.” 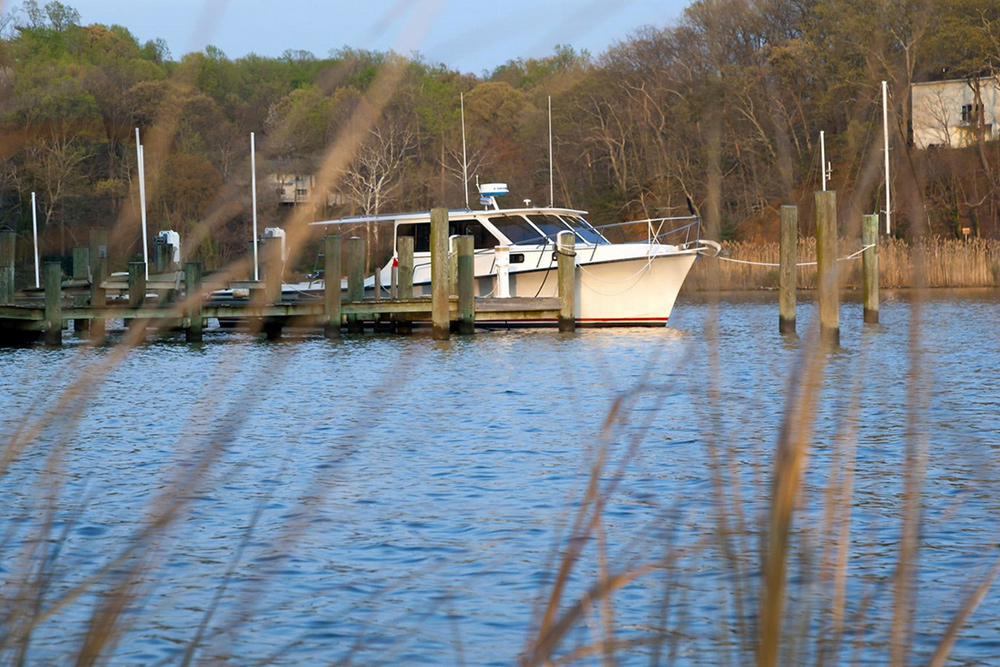 Of course, no self-respecting gunrunner would be able to transport goods without a private dock. The home now boasts a private, six-slip dock with a boatlift — and 2,000 feet of riverfront. 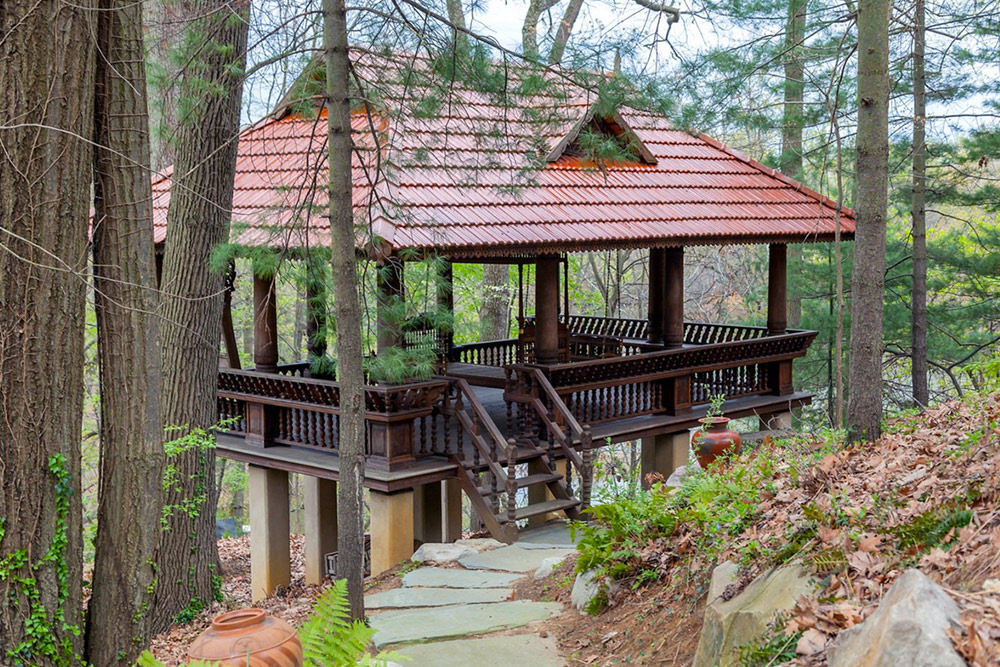 The current owners built the charming teahouse, a relaxing spot to enjoy a pot of Sencha — the tea that a guest is most likely to be served when visiting a Japanese home. The property also includes a conservatory, game room, catering kitchen, workshop, nine-car garage, roof garden, and tennis court.

Check out the image gallery and real estate listing for this home: 1600 Winchester Road, Annapolis, MD. (Find other homes for sale in Annapolis.)