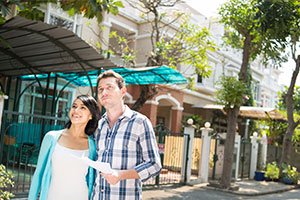 The more “coming soon” signs in shop windows, the better potential there is for that neighborhood to be the next hot spot.

Savvy homebuyers know that to get the maximum return on their real estate investment, they need to find not only a neighborhood that’s hot, but one that’s getting hotter.

How do you find those soon-to-be hot spots? Local price increases are the most obvious indicator that a neighborhood’s popularity is on the rise. But by the time prices skyrocket, it’s usually too late to beat the buyer wave and get the most bang for your buck.

Instead, if you’re looking for the next up-and-coming community, check out these helpful hints. For instance, keeping tabs on commercial development, home renovations, and local crime are great ways to start scouting the next “it” neighborhood.

When you see neighborhoods with ample commercial projects under construction — think Chipotle, Whole Foods, and Starbucks — you’re likely looking at an area on the rise. Think also Pilates studios, funky bars, and coffee shops. All of these venues are trendy staples these days, and they hint at an upcoming wave of buyers.

After all, developers of popular brand-name businesses don’t take their money lightly. If a trendy retailer or eatery has chosen to set up shop in an area, it’s only after their experienced staff have thoroughly vetted the future economic return there.

So the more “coming soon” signs in shop windows, the better potential there is for that neighborhood to be the next hot spot.

Especially in large cities or dense metro areas, another surefire clue to the next hot neighborhood is a mass transit expansion.

If a major city builds a brand-new metro or subway stop in a more run-down area, chances are that area won’t be run-down for long. Savvy real estate buyers snap up properties near new or upcoming mass transit areas while the prices still reflect the conditions of the current neighborhood.

In fact, nearly any property near a mass transit stop in large cities – new or not — is sure to eventually be in a hot neighborhood. That’s because cities have limited space, but growing demand as the population continues to expand.

Then there are renovations. A few newly remodeled homes amid blocks of older, shabbier homes are great indicators that the community is poised to enjoy an energetic turn-around.

Look for manicured and landscaped lawns, fresh exteriors like siding replacements and an overall polished look to a property. Fixtures such as new mailboxes, new fences or new doors are other great hints that a homebuyer has invested in a property and that many others will soon follow suit.

4. Declining Crime as A Clue to More Improvements

Finally, declining crime stats can also indicate an emerging neighborhood that’s in the process of shedding its gritty roots.

If a neighborhood is experiencing a crime reduction, homebuyers can assume city officials and residents are making a concerted effort to improve the quality of life there. And with improved quality of life comes more homebuyers and higher property values.

Especially in dense cities where properties are in increasing demand, if a crime-ridden area that has long deterred buyers is making improvements, tab it as an upcoming hot neighborhood.