Call it the greying of America. As baby boomers enter their golden years, a great demographic shift is taking place. Across the nation, the median age is creeping up. Yet this aging is not consistent from one place to the next. At Trulia, we wanted to know where exactly older people are concentrated. And how do different parts of the country compare as far as age distribution is concerned? To get a granular view of regional differences, Trulia took a look at the age structure of every county in the US.

To distinguish counties with different age distributions, we divided populations into three age groups: young, 0-19; working age, 20-64; and elderly, 65 and over. We used three colors, magenta, cyan, and yellow, to represent these ages. How strong one color is compared with the others shows the share of the corresponding age group in the county relative to the national average. For example, the greater the share of elderly people, the more yellow a county will look.

This method allows us to quickly observe regional age structures. Counties with large shares of elderly people are concentrated in the Sun Belt, in a northern strip from the interior Pacific Northwest to northern Michigan, and up through Appalachia and the Alleghenies to northern New England in the East. By contrast, Utah is stands out as the nation’s youngest state.

We took a closer look at counties in the top 100 metros to better understand how some populous areas are skewed in age:

The image below shows where each county falls on the coloring scheme, compared to the national average: 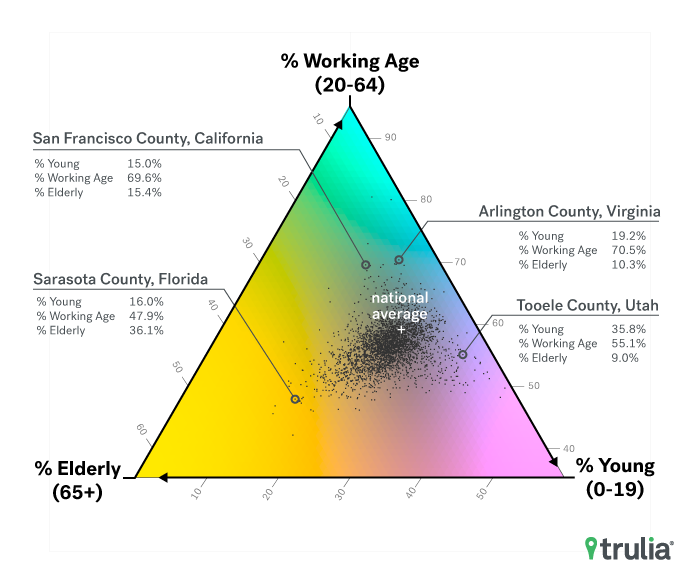 Median home values by county are based on Trulia estimates. We use the Census Bureau’s 2010 and 2017 population estimates by age.