The 2013 Q3 Census Homeownership and Vacancy survey shows that the vacancy rate is still above its pre-bubble level and remains unchanged from one year earlier. This might come as a surprise to house hunters, who have struggled with limited inventory when trying to find a home to buy or rent, but an unusually high share of vacant homes today is being held off the market. The elevated vacancy rate discourages new construction activity and is therefore one of the major hurdles to a full housing recovery.

To understand why vacancies are still widespread and what impact they have, we dug deeper into the Census data as well as other data sources that report vacancies at the metro level. Here’s what we found.

But wait – aren’t homes hard to find? Buyers (and renters, too) have had little to choose from because the listed inventory is low. The share of the overall housing stock that is listed for sale, based on National Association of Realtors (NAR) and Census data, rose slightly in 2013 Q3 compared to last year but is lower than at any other point during or after the bubble. In other words, the for-sale inventory is back down to its 2000 level, and tight inventory has helped fuel sharp price increases across the country over the past two years. That means there’s an inventory shortage, but not a housing shortage:

How can the for-sale inventory be relatively low while the vacancy rate is high? Because the share of vacant homes being held off the market – that is, neither for sale nor for rent – is rising. In 2013 Q3, 53.5% of vacant homes were held off market, up slightly from 52.9% in 2012 Q3 and from a low of 45% at the height of the housing bubble in 2006. 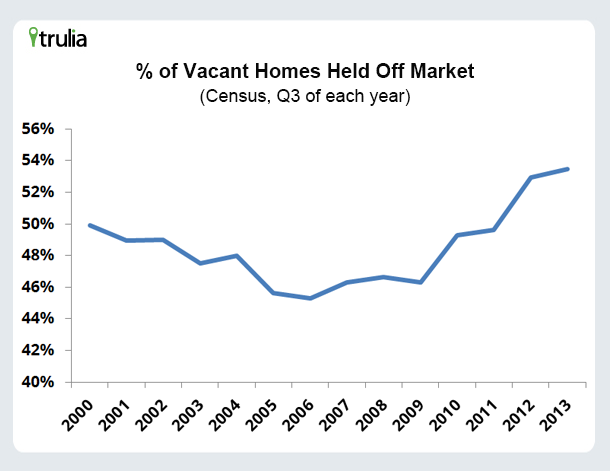 The Census data shed some light on these vacant homes being held off market. Over the past year, from 2012 Q3 to 2013 Q3, there were increases in the number of homes that were vacant because they needed repairs or were being prepared to be rented or sold. At the same time, there were declines in the number of vacant homes in foreclosures or other legal proceedings, which is consistent with other data showing big drops in the share of homes in the foreclosure process.

Many of the vacant homes now being held off the market won’t stay off the market forever. Homes under repair or being prepared to be sold or rented could come onto the market. These homes would then be added to the active inventory, which would slow down or even reverse price and rent increases while giving house hunters more housing options. However, the trend in the vacancy rate also depends on how fast vacant homes fill up, which hinges on the growth in the number of households. The Census survey showed that household formation, at 380,000 over the past year in Q3, remains below the normal level of 1.1 million; the underlying survey data showed a slight year-over-year increase in the share of Millennials (age 18-34) living with their parents. Without more new households, vacant homes will fill up slowly.

Where Are America’s Vacant Homes?

Looking at where vacant homes are helps explain why they are vacant. We estimated the share of vacant homes in each of the 100 largest metros, based on the 2000 and 2010 decennial Census, the 2010 and 2012 American Community Survey, and U.S. Postal Service data from 2012 and 2013 (see note below).

The vacancy rate is higher today than it was before the bubble in 86 of the 100 largest metros. That means that the elevated vacancy rate at the national level is widespread at the metro level, too.

More strikingly, the vacancy rate at the metro level as of October 2013 ranges from a low of 3% in San Jose to a high of 19% in Detroit – a huge gap. No other metro approaches Detroit’s high vacancy rate, but the other highest-vacancy metros include two types of metros: (1) other Rustbelt towns, like Gary and Cleveland, and (2) Sunbelt spots like Las Vegas and several Florida metros. Detroit, Gary, and Cleveland all have faced slow economic growth over several decades, and metros with slow growth (or worse, declining population or employment) tend to have more vacant homes. In contrast, Las Vegas and the Florida metros have had rapid growth and are likely to continue to, but they suffered from overbuilding during the housing bubble; in addition, Florida leads states in having the highest share of homes in the foreclosure process, which includes many vacant homes.

The vacancy rate is lowest in coastal California and several other metros that avoided the worst of the housing bust. San Jose, as well as Ventura County and Orange County in southern California, have the lowest vacancy rates in the country – though slightly above where their vacancy rates were in 2000. Because of geographically limited land as well as building regulations, it is traditionally difficult to build much new housing on the California coast, which helps keep the vacancy rate low.

The vacancy rate, therefore, remains a hurdle for the housing recovery. Even though listed inventory is tight, many vacant homes are being held off the market. The overall vacancy rate is above its pre-bubble level and moving downward slowly and irregularly. For construction, and the housing market overall, to return to normal, more vacant homes must be occupied.

The Census Homeownership and Vacancy Survey (HVS) often reports numbers that differ from other Census surveys. We rely on the HVS for national-level trends, comparing current with past HVS data, rather than comparing HVS data directly to other Census sources. The metro-level HVS data is based on too small a sample to use. Instead, to estimate the level and changes in vacancy rates by metro, we added together vacancy changes, excluding seasonal vacancies, from the decennial Census for 2000-2010, from the American Community Survey for 2010-2012, and from the U.S. Postal Service address file for 2012-2013. This yields the change in vacancy rate between 2000 and 2013. We used multiple sources because no one reports both current and historical metro-level vacancies, and each source defines vacancies differently.