Spring house-hunting season is upon us. Home searches peak in March and April, and this year the search is especially frantic as inventory is near a 12-year low. Many homes don’t stay on the market for long, so buyers will have to move fast – especially in markets with bidding wars and competing investor activity. But when it comes to searching for a home, as with everything else, moving too fast leads to mistakes and regrets. To find out which regrets are most common – and who is most prone to making decisions they’ll later regret — we asked more than 2,000 consumers what, if anything, they regret about their current home and most recent home-search process. 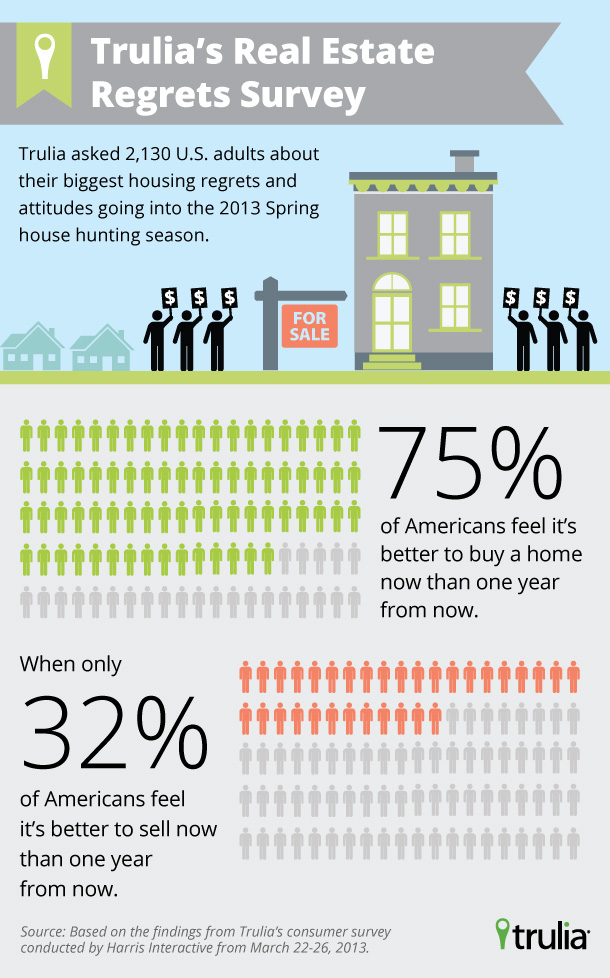 Buyers in a Rush; Sellers, Not So Much

The biggest challenge for home buyers this season is the lack of inventory, which is down 20-25% year-over-year and near its lowest level since before the housing bubble. Our consumer survey shows that people think now is the time to buy, not sell: 75% of respondents agreed with the statement “it would be better to buy a home now than one year from now,” but only 32% of respondents (and just 29% of current homeowners) felt the same way about selling now rather than one year from now.

Eager buyers, patient sellers: people want to buy before prices rise further, but no one wants to sell at the bottom–especially if they’re still underwater. These attitudes point to a 2013 housing season with bidding wars and stiff competition among buyers who want to get ahead of further price increases.

On the rental side, too, inventory remains tight: Census data show rental vacancy rates also near a 12-year low. So whether they’re looking to buy or rent, house hunters in 2013 will feel like they don’t have the luxury of taking their time and holding out for the perfect home. Many will need to act fast – and some will make decisions that they could regret later. With that in mind, we asked current homeowners and renters about their housing regrets; their answers are lessons for today’s house-hunters.

What Homeowners Regret About their Homes

Just over half of people – 52% — have at least one regret about their current home or the process of choosing it. (In this analysis, we exclude the 11% of respondents who said they were not involved in the process of choosing their current home.) Renters are more likely to have regrets than homeowners – 56% of renters versus 50% of homeowners – and their regrets are somewhat different, so we look at homeowners and renters separately.

What Renters Regret About their Homes

Renters have similar regrets – but are more likely to have them. They, too, wish they had chosen a larger home: 39% of renters with regrets did, making it the second-most common regret. And, renters, like homeowners, wish they had chosen a home with a shorter commute more so than the other neighborhood features we asked about: better schools and less crime. The top regret, though, was wishing they bought instead of rented, which 42% of renters with regrets – and 23% of renters overall – mentioned. 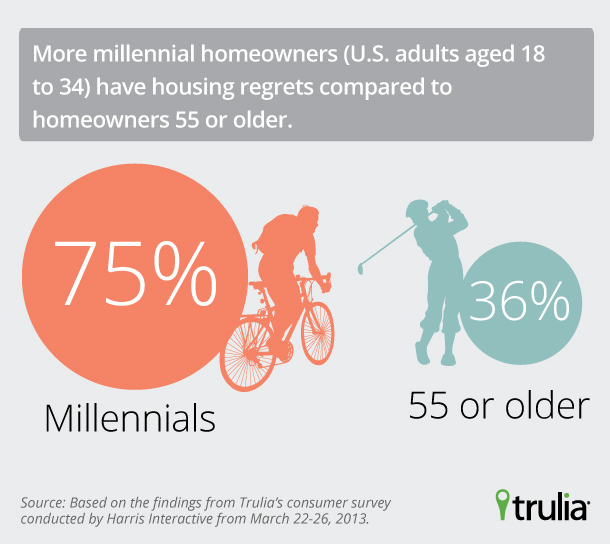 Among Millennials – those age 18 to 34 – 70% have at least one regret about their current home or most recent search process. Among Millennial homeowners, 75% have regrets, compared with just 36% of homeowners age 55 and older. Young renters, too, are more likely to have regrets than older renters, but the age gap in regrets is especially stark among homeowners.

The top regrets for young homeowners are the same as for adults overall: they wish they had chosen a larger home, done more remodeling, and had more information about the home. But these regrets are much more common among the young (even when comparing people in different age groups who moved into their current home at the same time). Whereas just 17% of all homeowners wished they had chosen a larger home, 31% of homeowners age 18-34 did. The lack of financial security was also particularly strong among the young: 8% of all homeowners wished they had been more financially secure before deciding on their current home, but twice as many 18-34 year-olds – 16% — did. Young people were also more likely to have regrets about their neighborhood than older adults did. Across all 18-34 year-olds, including homeowners and renters, 15% wished they had chosen a neighborhood with a shorter commute, compared with 8% of adults overall. 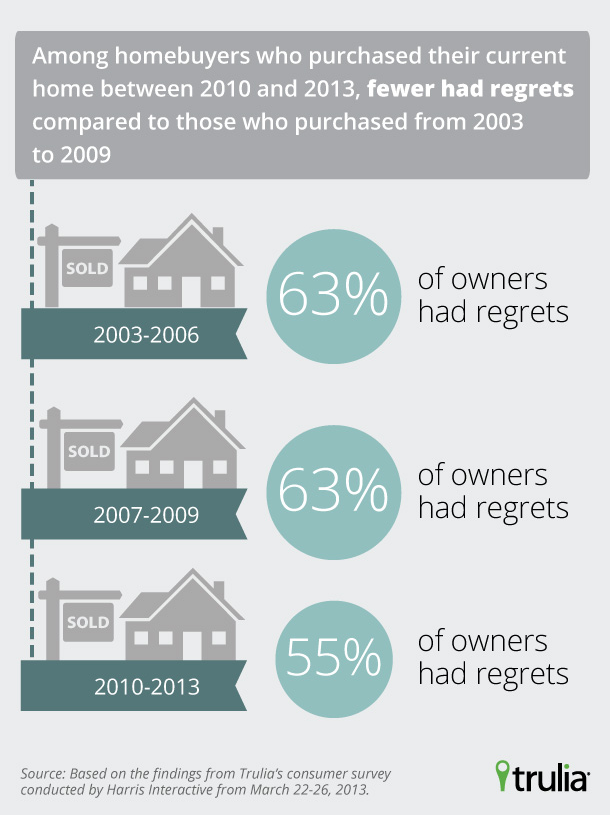 As the Market Recovers, Some Regrets Fade

Why are recent buyers less likely to have regrets? In 2010-2013, prices have been relatively affordable, mortgage rates have been very low, banks have been conservative in their lending, and the pain of the foreclosure crisis taught tough lessons about the risks and costs of homeownership– all of which have helped recent buyers make housing decisions with fewer regrets. Recent buyers have also seen prices appreciate since they bought, which should help them avoid one of the most painful housing regrets of the crisis: 46% of people who walked away from their home (i.e., defaulted on their mortgage) regret that they did.

Slow Down to Avoid Regrets

Market conditions in 2013 could pressure this year’s buyers and renters into making real estate decisions that they’ll regret. Buyers and renters need to brace themselves for a season of slim pickings: but rather than jumping on the first home that seems good enough, they should focus on not making decisions that lead to regrets.

So how can people avoid these big regrets by investing more in their house (e.g., bigger home, more remodeling, buying instead of renting) while being more financially conservative? By waiting: it’s a lot easier to invest more in a home without overstretching financially if you’ve had more years to save and gain financial wisdom. For many, savings and wisdom come only with age – no wonder older adults have far fewer regrets. Even though our survey revealed that most people believe that it’s better to buy now than one year from now, waiting until you’re financially secure enough to invest more in your house could turn out to be the decision you won’t regret.

This survey was conducted online within the United States by Harris Interactive on behalf of Trulia from March 22-26, 2013 among 2,130 adults ages 18 and older, among which 1,370 are homeowners and 706 are renters. This online survey is not based on a probability sample and therefore no estimate of theoretical sampling error can be calculated. For complete survey methodology, including weighting variables, please contact pr@trulia.com.