Trulia’s biannual Rent vs. Buy Report assumes a 30-year fixed rate mortgage with a 20% down payment and 25% tax bracket for households moving every seven years. With these assumptions, buying is 34.8% cheaper than renting on a national basis, based on March home values and rents. That’s slightly better than a year ago, when buying was about 34.2% cheaper. Why? Interest rates dropped a bit year-over-year to 3.86% from about 3.89%, which makes it slightly less expensive to take out a mortgage.

Those trying to decide whether to buy or rent a home this spring will have the easiest decision in the South. Eight of the 10 metros that offer the largest financial advantage of homeownership are there, with Philadelphia and Detroit being the only non-Southern market to make the list. Buying a home in the Big Easy will be the easiest on your wallet: after seven years of homeownership, buying a home is 52.3% cheaper in New Orleans than renting. Buying a home up the road in Baton Rouge, La., isn’t a bad deal either, where homeownership is 51.3% cheaper.

Potential homebuyers in the West and Northeast have a more difficult decision to make, although it’s still significantly cheaper to buy than rent. Seven of the 10 metros that offer the largest financial advantage of homeownership are in California, with Honolulu, New York, and Newark, N.J., the only non-Golden State markets where the margin is smallest. The financial advantage of homeownership is narrowest in Honolulu, but still 14.4% cheaper over seven years with 20% down. In San Jose, Calif., the margin is just 15.7%. Those considering buying a home in the other eight metros where the financial advantage is narrowest should fear not: it is at least 21% cheaper to buy a home than rent one.

Looking for a Retirement Home That’s Cheaper to Buy? Head to the Sunshine State

When it comes to the rent vs. buy math, retirees are different. Using 2014 American Community Survey Data, we found that those aged 65 and over tend to move about every 15 years* instead of seven, and over half would fall into the 15% federal tax bracket** instead of 25%. With those assumptions, buying is 41.8% cheaper than renting nationally. Even in metros with the slimmest margin, such as Honolulu, buying the median valued home is at least 27% cheaper than renting it. In New Orleans, the margin is 58.1%.

To help shed light on which cities might offer the best financial advantages of homeownership in retirement, we ran the numbers for the 100 U.S. cities with the largest share of residents aged 65 and older. It’s cheaper to buy a retirement home in each one of these cities than to rent one. However, the gap ranges from 71.6% cheaper in The Villages, Fla. to just 18.7% cheaper in Rancho Palos Verdes, Calif., And there’s even better news for those looking to retiree under the sun: each of the 10 cities that offer the largest financial advantage of homeownership are in the Sunshine State. 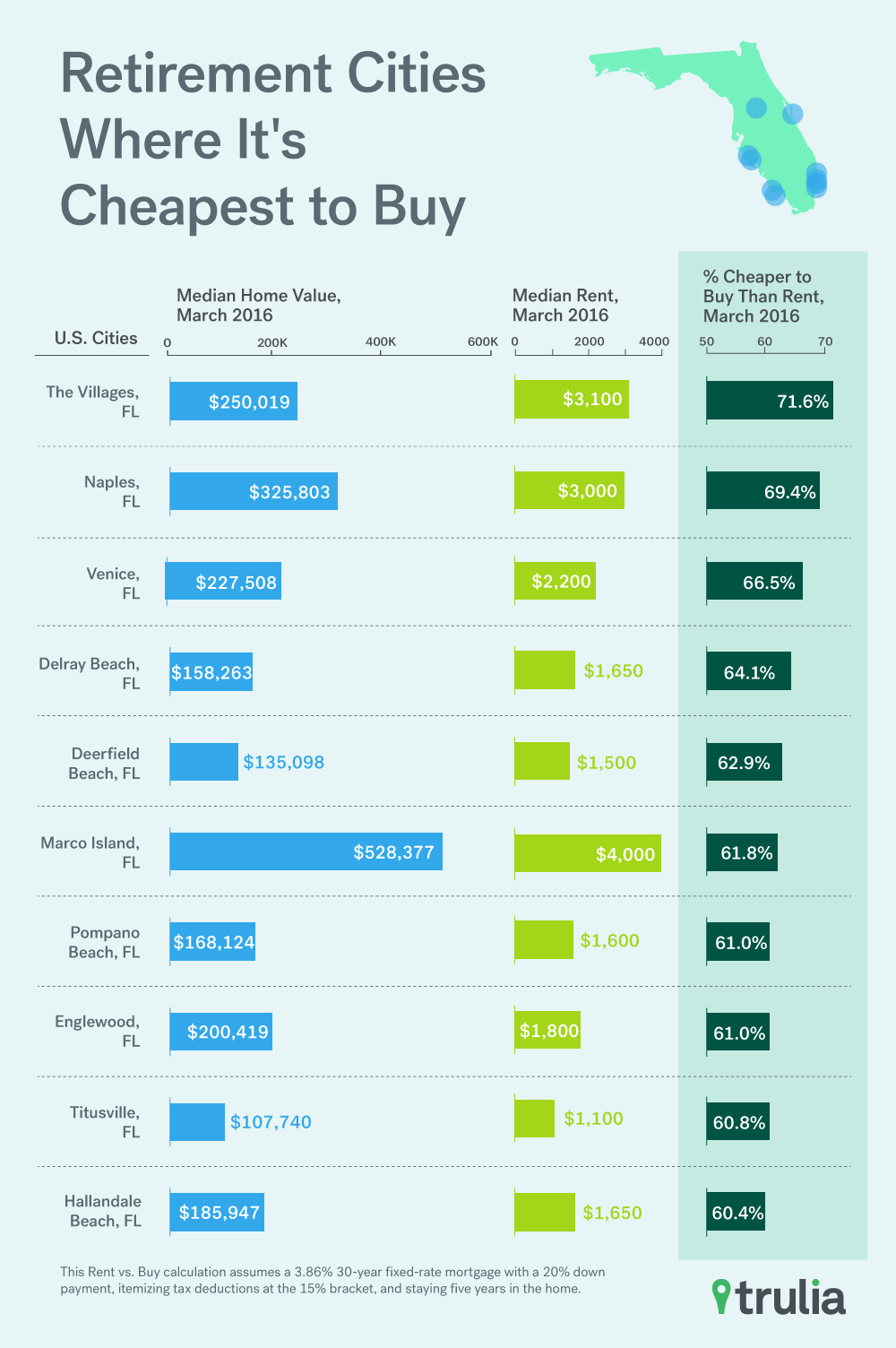 If being near other retirees is important, there’s more good news. In the 10 cities with the most retirees, buying is at least 38% cheaper than renting, but ranges up to 71.6% in The Villages. Although four of the U.S. cities with the most retirees are in Florida, those looking for a drier heat to retire in have options: another four are either in Arizona or Southern California, and in each one of those markets the cost of buying is between 38% and 55.9% cheaper than renting. 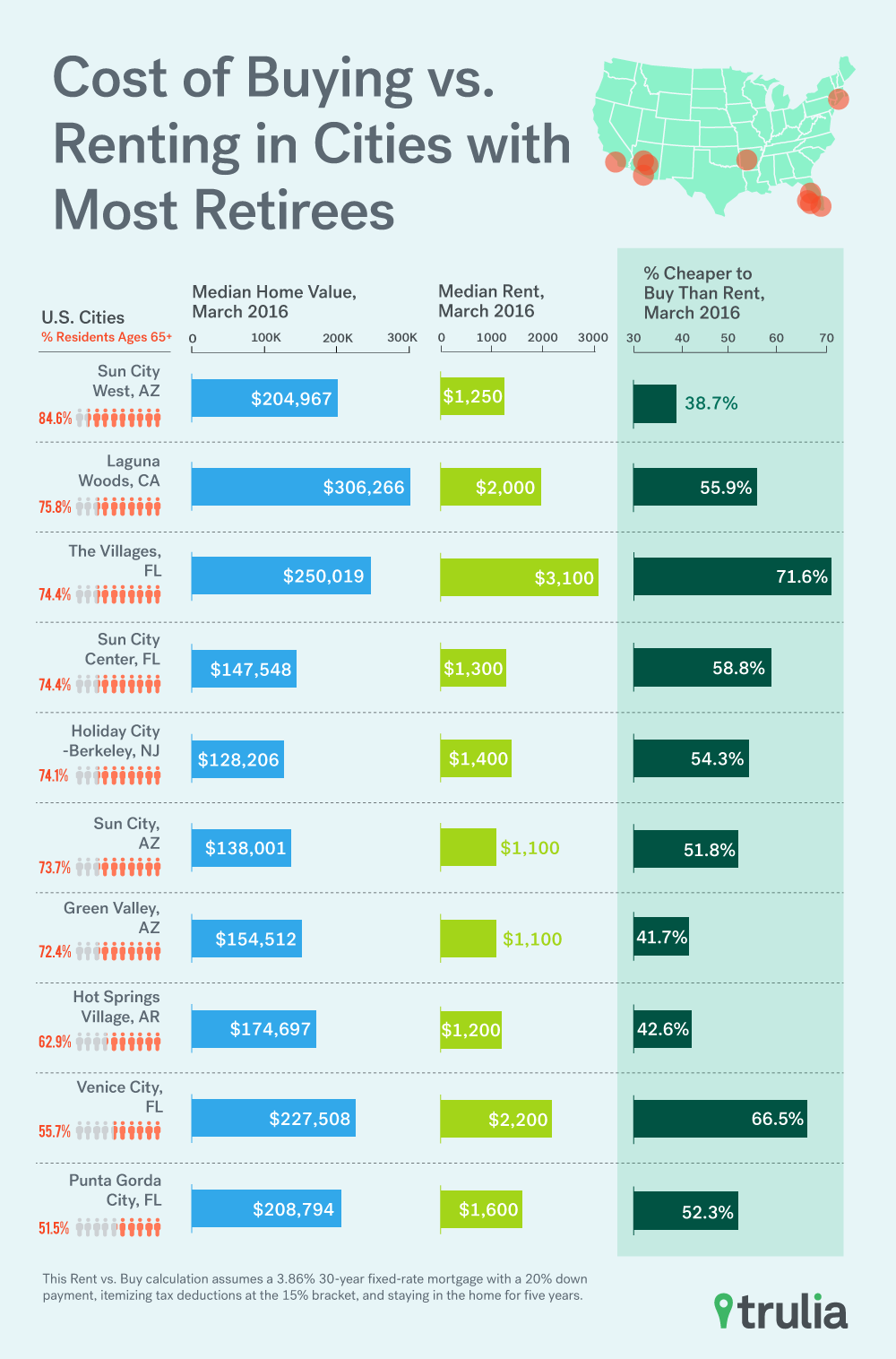 Our rent vs. buy equation takes into account the value of the equity in your home when you sell, which is important if you need to buy another home. The grim reality for most retirees is that their retirement home will likely be last home they’ll purchase, so any remaining equity in the house will be passed on to heirs. But what if you don’t have any, or don’t care to pass on anything to the ones you do have?

When we omit the value of home equity in our rent vs. model, it’s actually more expensive to buy a retirement home than rent one in 98 of the 100 cities with the largest 65+ populations. The only two cities where it’s cheaper to buy are the The Villages, Fla. and Danville, Va., where it’s 14% and 7.1% cheaper, respectively.

To recap, it is slightly cheaper to buy than rent this year compared to last, which is mostly due to a small drop in mortgage rates. Potential homebuyers in the South have a much easier decision to make than those in the West. For retirees, the decision is even easier, regardless of which city they looking to retire in. But for those old-timers who aren’t concerned about leaving anything to the youngin’s, renting is the cheaper option in their golden years.

Trulia calculates the costs of buying and renting by:

Trulia’s Rent vs. Buy Calculator lets you compare renting and buying costs using other assumptions about prices, rents, and other factors. It uses the same math that powers this report. You can read our extended methodology here.

Mortgage rates are from the Mortgage Bankers Association, April 1.

(**) 2014 American Community Survey Data shows that approximately 55% of US households aged 65 and over would fall into the 15% tax bracket.