The rent versus buy math is different in each local market. Buying ranges from being just 5% cheaper than renting in Honolulu to being 66% cheaper than renting in Detroit. But even for a specific market, the cost of buying versus renting depends on how much home prices rise (or fall) after you buy. Our model assumes conservative home price appreciation, but – as we all know after the last decade – home prices can unexpectedly rocket or plummet. This edition of Trulia’s Rent vs. Buy Report focuses on how different home price assumptions can affect the math for someone deciding to buy or rent today.

Our interactive Rent vs. Buy Map shows how the math changes under alternative assumptions for the mortgage rate, the income tax bracket for tax deductions, and the number of years that one stays in the home.  To personalize the decision fully, Trulia’s Rent vs. Buy Calculator lets you compare the cost of renting and buying based on whatever assumptions and scenarios you like.

This report, our map, and our calculator are all powered by the same math, which includes these five steps:

To compare the costs of owning and renting, we assume buyers get a 4.5% mortgage rate on a 30-year fixed-rate loan with 20% down; itemize their federal tax deductions and are in the 25% tax bracket; and will stay in their home for seven years. Under these assumptions, buying is 38% cheaper than renting nationwide, taking into account all of the costs and proceeds from buying or renting over the entire seven-year period. The full methodology is available here.

Buying a home remains cheaper than renting in all of the 100 largest metro areas. Even though prices increased sharply in many markets over the past year, low mortgage rates have kept homeownership from becoming more expensive than renting. Also, in some markets, like San Francisco and Seattle, rents have risen sharply; rising rents hurt affordability relative to incomes, but rising rents make buying look cheaper in comparison.

The rent-versus-buy math differs across metros mostly because each local market has its own normal level of prices and rents, but also because property taxes and home-price appreciation differ in individual markets as well. Taking all these factors into account, buying ranges from just 5% cheaper than renting in Honolulu to 66% cheaper than renting in Detroit. Generally, buying is a tougher call relative to renting in California and New York, while the gap is largest in the Midwest and South.

Will renting become cheaper than buying soon? Some markets might tip in favor of renting this year as prices continue to rise faster than rents and if – as most economists expect – mortgage rates rise, due both to the strengthening economy and Fed tapering. For each metro, we identified the mortgage rate “tipping point” at which renting becomes cheaper than buying, given current prices and rents. If rates rise, Honolulu would become the first metro to tip, at a mortgage rate of 5.0%. San Jose and San Francisco would also tip before rates reach 6%. But those are the extreme markets. Nationally, rates would have to rise to 10.6% for renting to be cheaper than buying – and rates haven’t been that high since 1989.

Note: Negative numbers indicate that buying costs less than renting. For example, buying a home in Detroit is 66% cheaper than renting in 2013. Trulia’s rent vs. buy calculation assumes a 4.5% 30-year fixed-rate mortgage, 20% down, itemizing tax deductions at the 25% bracket, and 7 years in the home. Download the full Rent vs. Buy cost considerations for the 100 largest U.S. metros here: (PDF) or (Excel)

Lots of factors determine whether it’s cheaper to rent or buy. Some – like how long you live in the home and whether you itemize your tax deductions – are in your control. Others – like the prevailing mortgage rate – are known upfront even if you can’t control them. But the big uncertainty is what will happen to home prices after you buy.

In Trulia’s Rent vs. Buy model, the initial purchase price and the rate of home-price appreciation determine how much you can get for your home when you sell it. Even though sales proceeds don’t affect actual monthly costs like the mortgage payments, sales proceeds do affect the overall cost of homeownership and therefore get included in the average monthly cost of owning. (Remember, we’re using a net present value calculation, which discounts future costs and proceeds relative to immediate costs.)

Even small differences in home-price appreciation have large effects on the average monthly cost of homeownership. Using Trulia’s Rent vs. Buy Calculator for a $250,000 home, 4.5% mortgage rate, 25% tax bracket, and the national average property tax rate, the average monthly cost of ownership is $1,180, assuming home prices rise 2% annually. But what if home prices rise more or less than that?

This graph shows how annual home price appreciation affects the average monthly cost of homeownership for this hypothetical $250,000 home: 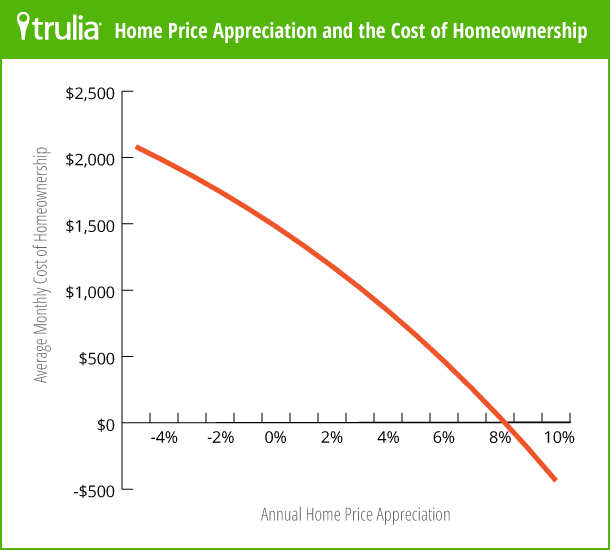 Prepare For The Worst When Deciding Between Renting And Buying

In our rent vs. buy calculations, we use a conservative annual home price assumption that ranges between 1.7% and 3.1%, depending on the metro. The reality, though, is that there’s a huge degree of uncertainty about what home prices will actually do, and the cost of buying relative to renting could turn out to be a lot higher or lower than with our conservative baseline appreciation assumption. To see how much uncertainty there is around what could happen to home prices, we calculated the annual home price appreciation for the best and worst seven-year periods over the past 20 years for each metro, using Federal Housing Finance Agency (FHFA) price data. (Rent appreciation is also uncertain, but it’s far less volatile than home-price appreciation, so we kept it as the baseline assumption.) These best- or worst-case scenarios aren’t likely to happen again soon, but because they happened in the past, they are within the realm of possibility. For most – but not all – metros, the worst seven-year period for home prices was the most recent seven years.

In Los Angeles, for instance, during the best seven-year period for home-price appreciation, prices rose 15.8% annually; but prices fell 4.8% annually during the worst seven-year period. Using this range of price appreciation means that buying could be either a moneymaker (price gains of 16% annually would yield sales proceeds that far outweigh all other costs) or could cost 63% more than renting (if prices fall 5% per year). While our conservative baseline assumption for price appreciation reveals that buying is 24% cheaper than renting in Los Angeles today, buying could turn out to be better than free or far more expensive than renting, depending on which kind of history repeats itself in the future. Even Pittsburgh, a metro with relatively stable price growth, ranged from 5.7% annual price growth during the best seven-year period to just 1.3% price growth during the worst: that means buying could plausibly be 72% cheaper than renting if prices rise at their historical best down to 41% cheaper than renting if price rise at their historical worst.

In considering whether to buy or rent a home, you shouldn’t think for more than a moment about the best-case scenario. Even though home prices are rising at breakneck pace today, that pace is now slowing. And if the last bubble taught us anything, it’s that excessive optimism about future home prices can lead to foolish decisions and heartbreak.

Instead, look at the worst-case scenario seriously when thinking about buying versus renting. With home-price appreciation equal to each metro’s worst seven-year period, buying is still cheaper than renting in 63 of the 100 largest metros, but in the other 37 metros renting would be cheaper than buying – and often much cheaper.

For example, in Pittsburgh, buying remains 41% cheaper than renting if prices rise just 1.3% annually, which is the worst actual appreciation experienced by the city over any seven-year period in the past 20 years (from 2005 Q3 to 2012 Q3).

The worst-case scenario for Los Angeles is an annual price decline of 4.8%, which happened between 2006 Q1 and 2013 Q1. For a person today considering whether to buy or rent in Los Angeles, buying would be 63% more expensive than renting with annual price declines of 4.8%. That’s a very different scenario than what we saw with our conservative baseline assumption, which makes buying 24% cheaper than renting.

To be clear, we’re NOT forecasting or expecting that the worst case will happen. In fact, no one has a crystal ball to show what will happen to home prices over the next seven years, and anyone who says they can predict home prices that far out is lying to you. Ultimately, the decision to buy or rent a home means making a huge choice in the face of lots of uncertainty. Start with our conservative baseline assumption. Go ahead and hope for the best, but be prepared for the worst.