Call it a different kind of “red zone.” Neighborhoods around National Football League stadiums tend to have homes that are more expensive both in sales and rental value, but new stadiums built in the last decade, by and large, have failed to lift the fortunes of homes in nearby areas.

In other words, owning a home near a stadium is nice, but if they build one down the street, don’t get your hopes up.

The impact of NFL stadiums on surrounding areas is a timely issue given that the Super Bowl will be played Feb. 7 in the new Levi’s Stadium – a venue sought after in the Bay Area and eventually built in Santa Clara, Calif., – and the protracted fight over the league’s return to Los Angeles after a 20-year absence. Last week, NFL owners voted 30-2 to return the Rams franchise to the Los Angeles area, specifically, a site in Inglewood, Calif.

Trulia took a look at the current value of real estate and comparable rentals within a 2-mile radius around existing NFL stadiums, evaluated changes to home values near stadiums built in the last decade, and examined the areas around the proposed new sites in Los Angeles. We excluded the Levi’s Stadium in Santa Clara, Calif., since it just opened in 2014, and omitted the temporary home of the Minnesota Vikings while including its future home, US Bank Stadium. While we did not find a definitive cause-and-effect between stadiums and home values, there were some strong relationships. We found: 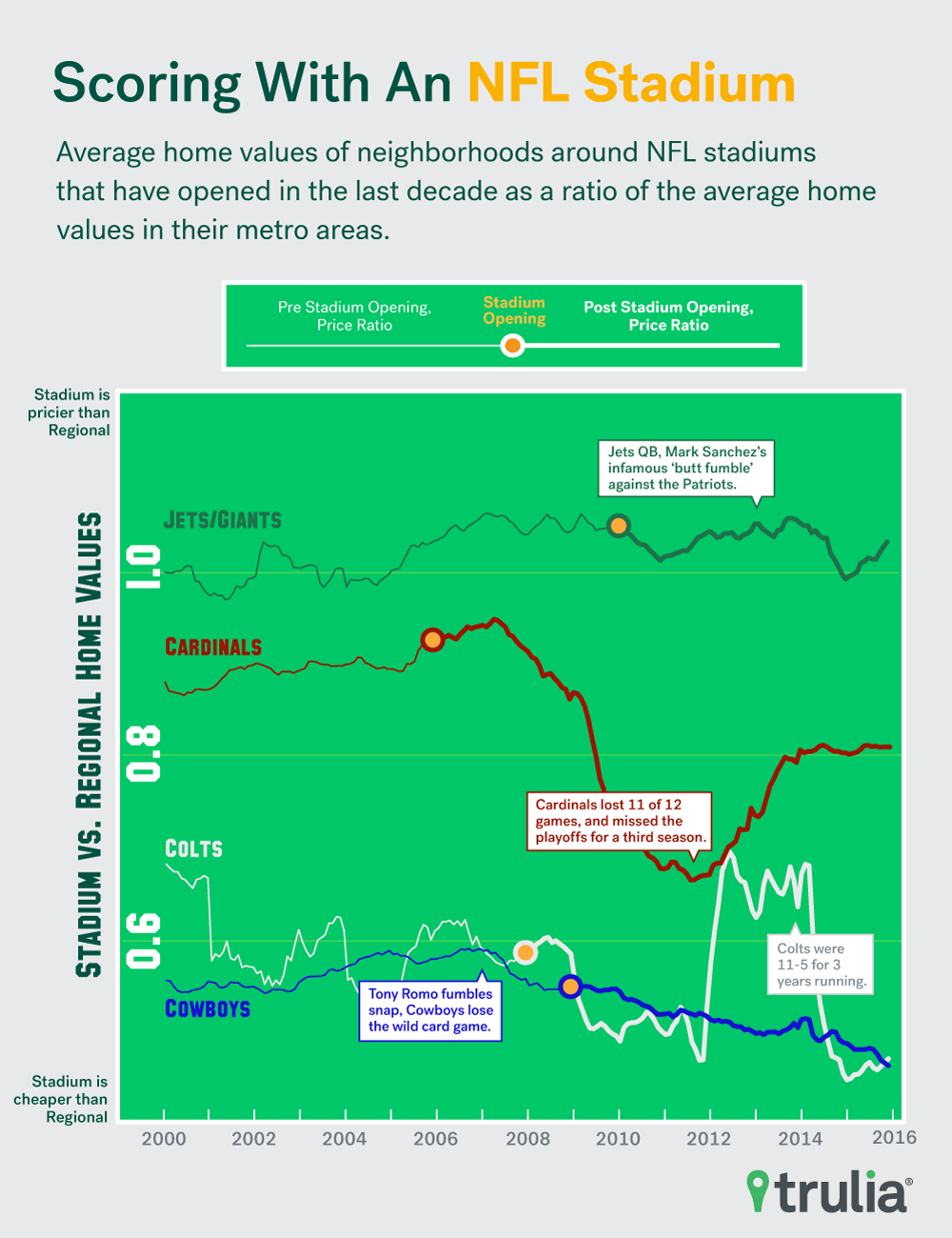 City officials in St. Louis, citing the value of the franchise to the community, offered more than $400 million in taxpayer money to build a new $1.1 billion stadium and keep the team. Inglewood officials are also offering tax breaks for a $2.2 billion project that may include new residential construction. Home values and rents near the Edward Jones Dome are 16.7% and 5.1% higher, respectively, than homes in the St. Louis metro area on average, according to our study. 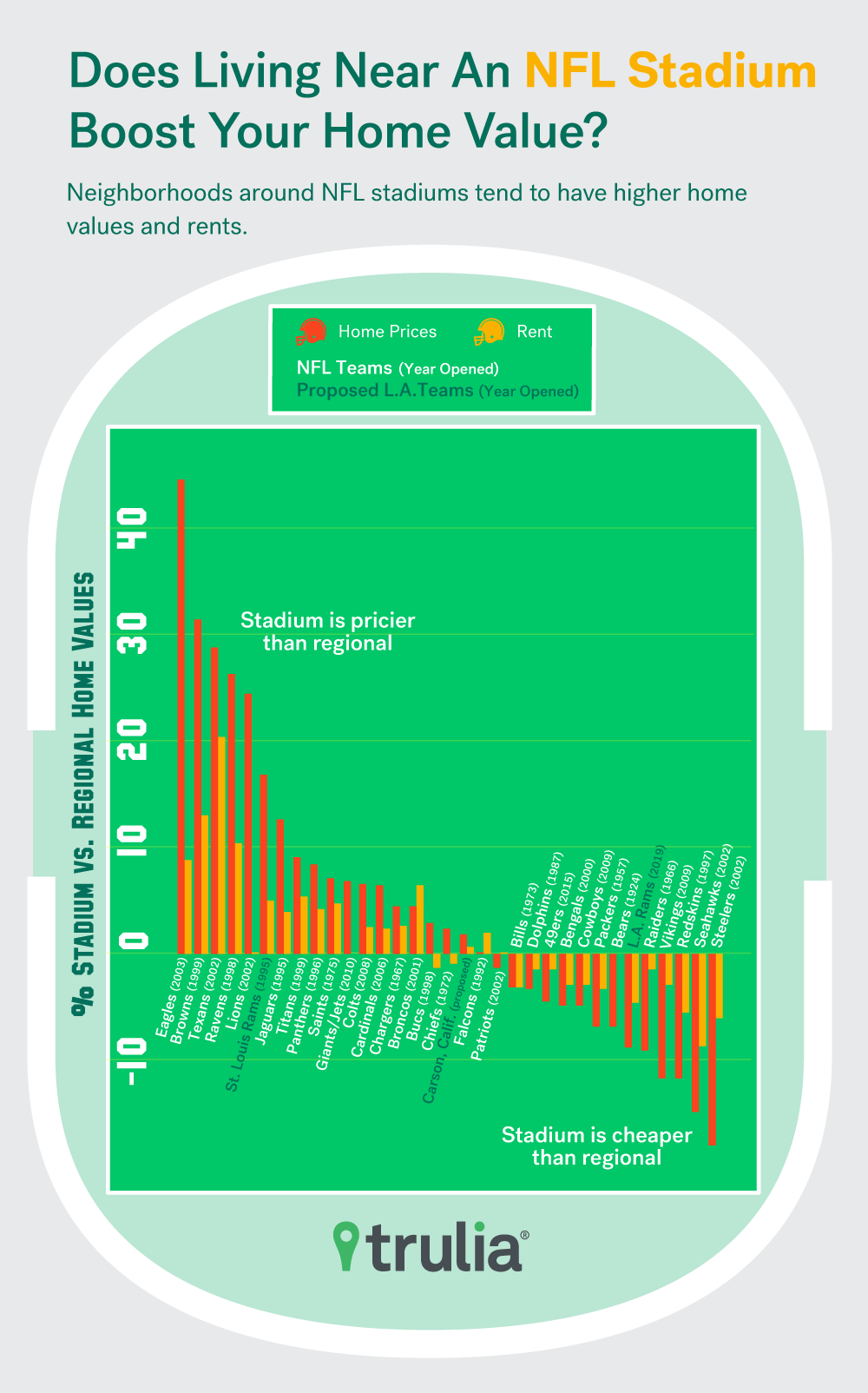 Though every stadium has its own unique characteristics – MetLife Stadium, for instance, is located in the sparsely populated Meadowlands region of East Rutherford, N.J., while Heinz Field is in downtown Pittsburgh – studies have shown that these structures have a significant economic impact on their neighbors including residential real estate.

What our research, like other previous studies, suggests is that the impact, if any, is inconclusive and/or the neighborhood surrounding the stadium, rather than the stadium itself, is the determining factor.

For instance, buyers and renters pay a premium to live near some stadiums including Lincoln Field, home to the Philadelphia Eagles, and First Energy Stadium, home the Cleveland Browns. A buyer should expect to pay 44.3% more than they would for an average Philly home, or 31.2% more for an average Cleveland home. Likewise, rents are 8.9% and 12.9% higher respectively.

Inglewood Pitched As More Than A Stadium

Rams owner Stan Kroenke has pitched the Inglewood stadium as more than just a football venue. The site will be developed with movie theaters, shopping and with a residential component. It will also house league offices and play host to TV and digital production for the NFL.

“We think it’s going to boost property values,” said Sandra Green-Murray, a real estate agent with Playa Marina Properties in Los Angeles. “This is an area with a lot of property that can be developed. We’re expecting lots of growth.”

Green-Murray said Inglewood has been a hot market as of late. Inventory is low and homes don’t stay on the market long. Inglewood still lags greater LA for average home prices.

To determine whether homes near NFL stadiums are worth more or less than other homes in a metro area, we estimated a hedonic model to determine the effect of being within two miles of a stadium on a home’s value while controlling for the number of bedrooms, number of bathrooms, square feet, lot size, age, and zip code of each property. This allowed us to estimate the percentage value difference for properties near stadiums compared to properties further away. We used a 10% level for statistical significance, and employed a 5% trimmed sample to reduce the effects of outliers on the regression estimates. Only metros where the coefficient on being within two miles from a stadium was significant were considered as having an effect. Among the 31 U.S. metros with NFL teams that we examined (the Giants and Jets share a stadium in New Jersey), all but one made the cut. Also, we excluded Levi Stadium in Santa Clara, Calif., since it just opened in 2015.