Should you buy a newly built home or one that’s been previously lived in? Both have their advantages and both have people who love them. Trulia surveyed 2,048 Americans in late March and early April 2014 about their preferences for new versus existing homes, and also analyzed recent home-purchase and building-permit data from the Census. Here’s what we found.

Twice as Many People Prefer New Homes Over Existing Homes

For the same price, 2 in 5 of Americans (41%) strongly or somewhat prefer to buy a newly built home over an existing home. Just 21% strongly or somewhat prefer an existing home. The remaining 38% have no preference. (The survey question explained that “new” means newly built, while “existing” means someone else has lived in it.) 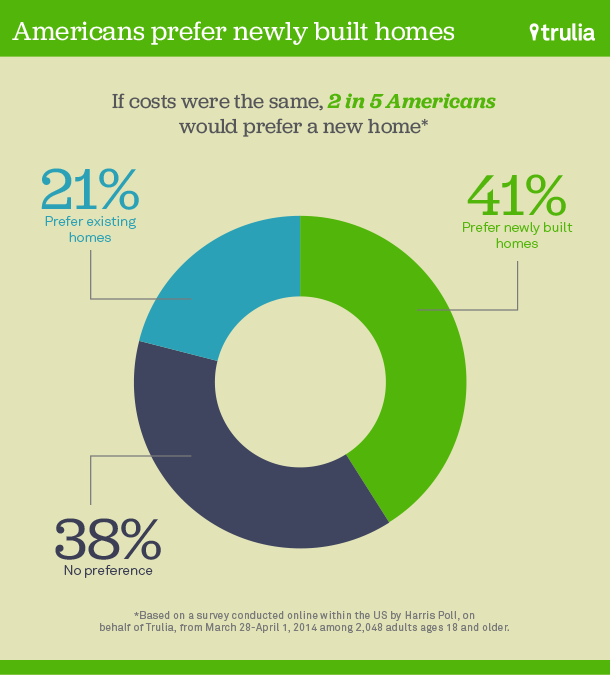 Preferring a new home is one thing; being willing to pay for it is another. So how much more do new homes cost? Comparing median prices, a new home typically costs $290,000 according to the Census – that’s nearly 50% more than existing homes, which typically cost $198,500 according to the National Association of Realtors (NAR). But that’s not an apples-to-apples comparison. Why? The typical new home is bigger than the typical existing home, which explains much of the difference in median prices. Also, the typical new home tends to be in lower-price-per-square-foot neighborhoods than the typical existing home because the priciest metros and expensive neighborhoods tend to have less single-family home construction.  To get a better measure of the true new-home premium, we used all for-sale listings, excluding foreclosures, on Trulia from January to March 2014, and adjusted for property attributes and location. We found that that new homes (those built in 2013 or 2014) are typically priced 20% higher than older homes with similar attributes (e.g., square footage, bedrooms, bathrooms, etc.) and in the same zip code.

The young are most likely to say they’re willing to pay what it takes to buy a new home. Among people age 18-34, 21% preferred a new home and were willing to pay at least a 20% premium for it compared with just 11% of adults aged 65 and older (and 17% of all adults, as mentioned above). But when reality strikes, the young aren’t buying new homes quite as often as older adults are. Census data from 2012 reveals that just 5.5% of adults under 35 who bought a home in the previous year purchased a recently built home, lowest of all age groups (see note). Furthermore, higher-income households are much more likely to choose new homes; 9.4% of recent homebuyers with household incomes over $200,000 bought a new home versus 4.8% of buyers with household incomes under $25,000.

Why Do People Prefer New Homes or Existing Homes

For people who strongly prefer a new home, the top reasons are (1) to have modern features (e.g. bigger closets, a kitchen island, open floor plan, walls pre-wired for flat screen TVs, or radiant floor heating); (2) to be able to customize the home before construction is completed; and (3) to spend less on maintenance and repairs.

These advantages of owning a new home are real. According to the Census, two-thirds of new-home sales nowadays are signed before construction is completed, so buyers of new homes do, in fact, typically have a chance to customize their home. Another Census survey confirms that new homes don’t require as much maintenance and repair; the median expenditure for maintenance and repair is $8/month for homes built in the last four years compared with $33/month for all homes.

While cost may be a barrier to buying a new home, a bigger hurdle might be finding one to buy depending on what part of the country you’re in. Right now, the South leads the country in single-family home construction. Census building-permit data show that the five metros with the most single-family construction in 2013, relative to the size of the local market, were all in Texas and the Carolinas: 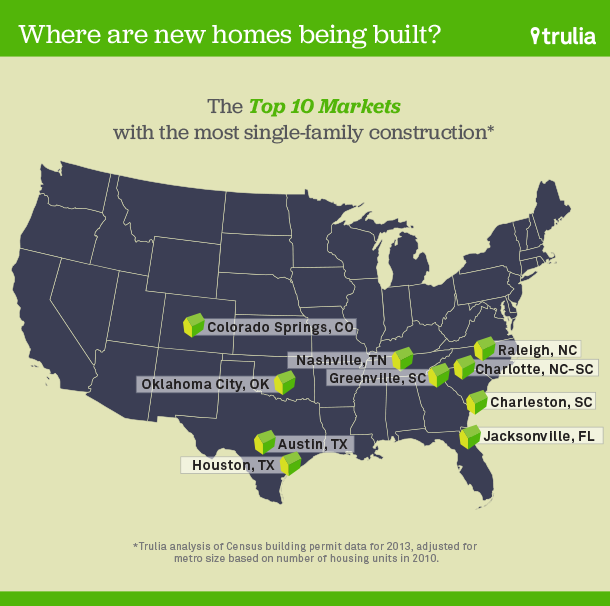 Across the country, the supply of new homes for sale has been limited in the past few years. After the bubble burst, existing homes dominated the market. New-home starts and sales plummeted, while existing-home sales got a boost from a spike in foreclosure sales. The ratio of existing-to-new home sales rose from 6-to-1 before the bust to 14-to-1 in 2011. Since then, construction of single-family homes has increased while foreclosure sales have declined, bringing the ratio of existing-to-new home sales back down to 12 to 1 in 2013. 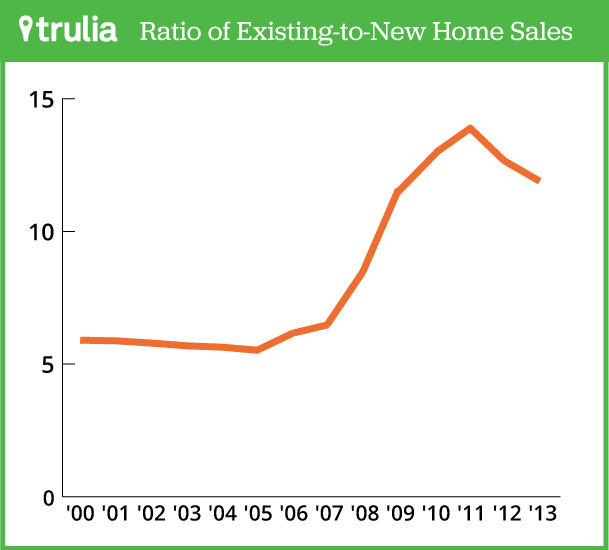 As the housing market continues to recover, new homes should be a growing share of overall sales. Year over year, the inventory of new homes for sale rose 25% according to the Census – well ahead of the 3% increase in the inventory of existing homes for sale according to NAR. For homebuyers who want a new home and are willing to pay the upfront premium to get one, this is good news. They’ll soon have more homes to choose from as single-family construction picks up from today’s low levels.

Note: in addition to Trulia’s consumer survey, we used Census data on recent home purchases and building permits. The Census home-purchase data are from the 2012 American Community Survey Public Use Microdata Sample; we looked at homeowners who moved into their current home in the previous year and calculated the share living in a new home (built since 2010) or an existing home (built before 2010). Local construction activity is based on the Census Building Permits Survey annual totals for 2013.

This survey was conducted online within the United States between March 28 to April 1, 2014 among 2,048 adults (aged 18 and over), by Harris Poll on behalf of Trulia via its Quick Query omnibus product. Figures for age, sex, race/ethnicity, education, region and household income were weighted where necessary to bring them into line with their actual proportions in the population.

All sample surveys and polls, whether or not they use probability sampling, are subject to multiple sources of error which are most often not possible to quantify or estimate, including sampling error, coverage error, error associated with nonresponse, error associated with question wording and response options, and post-survey weighting and adjustments. Therefore, Harris Interactive avoids the words “margin of error” as they are misleading. All that can be calculated are different possible sampling errors with different probabilities for pure, unweighted, random samples with 100% response rates. These are only theoretical because no published polls come close to this ideal.

Respondents for this survey were selected from among those who have agreed to participate in Harris Interactive surveys. The data have been weighted to reflect the composition of the adult population. Because the sample is based on those who agreed to participate in the Harris Interactive panel, no estimates of theoretical sampling error can be calculated.