Can’t we all get along? Actually we do — mostly.

Despite a national discussion that suggests we’ve become a nation divided, the reality is when it comes to our neighborhoods we get along pretty well – even if we do bother one another from time to time.

We found that a majority of Americans are friendly with their neighbors and know them on a first name basis, but most people still admit to having pet peeves with their neighbors. Younger Americans, particularly millennials and Gen Xers, are the most sensitive and confrontational neighbors, suggesting that the “get off my lawn!” attitude associated with older baby boomers may be largely a myth.

It seems that everyone either has, or knows someone with, a horror story about their neighbors, evoking fears about nightmare neighbors. But how do Americans actually perceive their neighbors? What are the pet peeves about our neighbors that drive us nuts? Who makes a good neighbor and who doesn’t?

Despite generally positive sentiments towards neighbors, most Americans (68%) still griped about neighbor pet peeves and nearly half of Americans (49%) experienced a problem with a neighbor in the past 12 months. More than half (56%) of those who had issues with neighbors cited noise problems, for example loud music, pet noise, and loud parties. Visual or aesthetic issues, such as poor yard conditions, were a distant second (28%) in terms of neighbor related problems. 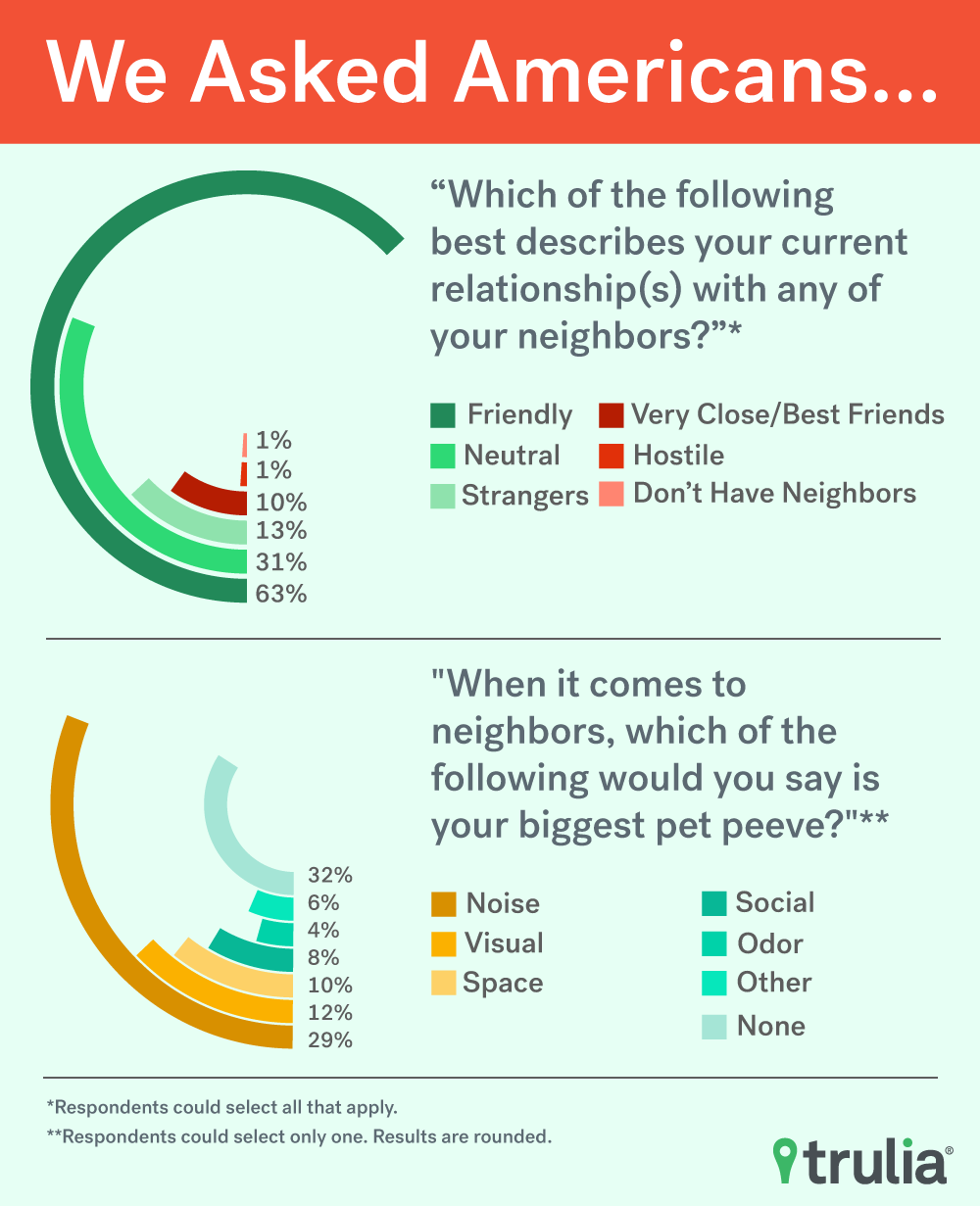 Among Americans who have experienced a problem with a neighbor in the past 12 months, more than half (56%) say they ignore it, but of those that do act, most (62%) choose to speak directly to their neighbor to resolve the issue, either in person or over the phone. More than one-third (35%) relied on third-party mediation and contacted authorities when facing an issue with neighbors. In a few instances, some people took more extreme measures by retaliating (10%) or actually moving away to escape a problem neighbor (6%).

Neighbor pet peeves and reactions to neighbor problems are not the same for all Americans. Age and generational differences appear to have a strong influence on what irks people and how they respond to problematic neighbors. Contrary to the popular stereotype of low-tolerance baby boomers, 63% of those 55 years of age or older reported having no problems with neighbors in the last 12 months. On the other hand, more than half of millennials (61%) and Gen Xers (52%) encountered issues with their neighbors in the last year.

Millennials were the most sensitive age group across all types of pet peeves when it comes to neighbors. Over 4 in 5 millennials (83%) claimed to have noise-related pet peeves compared to just two-thirds of the general adult population (67%). This is not surprising given that millennials are younger and tend not to own their home at this stage of their lives. Millennials, for example, comprise a much higher share of renters (52%) than Gen Xers (37%) and baby boomers (22%), which likely suggests they are living in closer quarters with others and may be more susceptible to neighborly annoyances. Indeed, Trulia research finds that millennials also tend to live in housing units that are likely to place them closer to more neighbors. Specifically, 27% of millennials live in either apartments or condominiums compared to 19% of Gen Xers and 16% of baby boomers. Renters as a whole are more likely to have experienced noise (37%) and odor (10%) issues compared to homeowners (22% and 5%, respectively) and seem to be less familiar with their neighbors as they are more than twice as likely to characterize their relationship with their neighbors as “strangers” (19%) compared to homeowners (9%). 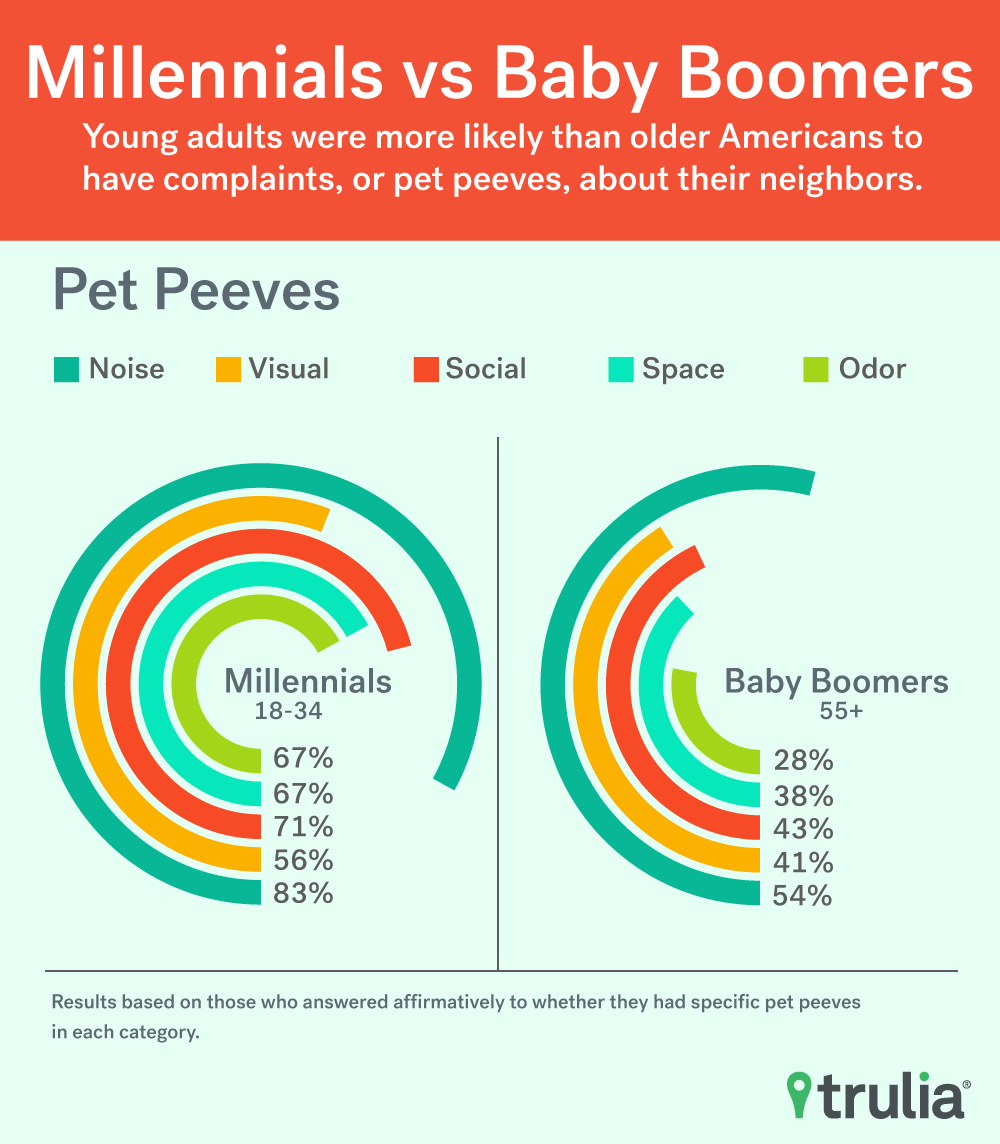 In addition to generational differences in pet peeves when it comes to neighbors, family structure and income appear to dictate how peeved people may be by their neighbors. Those with children in the household were almost two and a half times more likely to experience a space-related issue in the last year than those without, 14% versus 6%. Americans who make $100,000+ per year are more likely than those who make less than $50,000 per year to experience visual/aesthetic related issues with neighbors, 19% versus 11%, respectively. While fewer higher income earners seemed to have experienced issues with neighbors in the past year, more Americans earning more than $100,000 a year experienced visual or aesthetic issues than the general population, 19% versus 14%, respectively.

Millennials and Gen Xers reacted most strongly to problems with neighbors, while women and those who are retired tended to ignore problematic neighbors. Millennials and Gen Xers, however, handled their beef with neighbors in different ways. More Gen Xers who have experienced a problem with a neighbor in the past 12 months (29%) chose in-person dialogue to sort out issues with neighbors compared to millennials (19%). Millennials, on the other hand, relied on third-party mediation by contacting authorities at a rate twice that of baby boomers (20% versus 10%).

This survey was conducted online within the United States by Harris Poll on behalf of Trulia from September 14-16, 2016 among 2,069 adults ages 18 and older. The online survey is not based on a probability sample and therefore no estimate of theoretical sampling error can be calculated. For complete survey methodology, including weighting variables and subgroup sample sizes, please contact dweidner@trulia.com.