Some of the nation’s least affordable markets are also ground zero for the fight against building affordable housing – which opponents say, among other things, depreciates nearby home values. Resistance to affordable housing development has surfaced in tight housing markets across the country such as San Francisco, New York, and Seattle.

Given low inventory and high prices in these tight markets, we set out to uncover how much homeowners really have to fear.

We focused on the time period prior to the start of the housing bubble in 2007 in order to ensure that prices reflect consistent comparisons around the time a project is completed and ready for occupancy.

[1] HUD uses the term “placed into service” to denote when an eligible household can move in. For purposes of this report, we consider this the time at which the project is complete and ready for occupancy.

[1] Using distance measures as a way to compare potential effects of housing projects on property values proximate to a project site to those in surrounding neighborhoods is common in the academic literature. See Ellen et al. (2007)’s analysis of the effect of subsidized housing projects in New York City on property values by comparing price changes of properties within a 2,000 foot distance ring to those in similar surrounding neighborhoods. Ellen, Ingrid Gould, Amy Ellen Schwartz, Ioan Voicu and Michael H. Schill. 2007. “Does Federally Subsidized Rental Housing Depress Neighborhood Property Values?” Journal of Policy Analysis and Management. Vol. 26, No. 2, pp. 257-280. 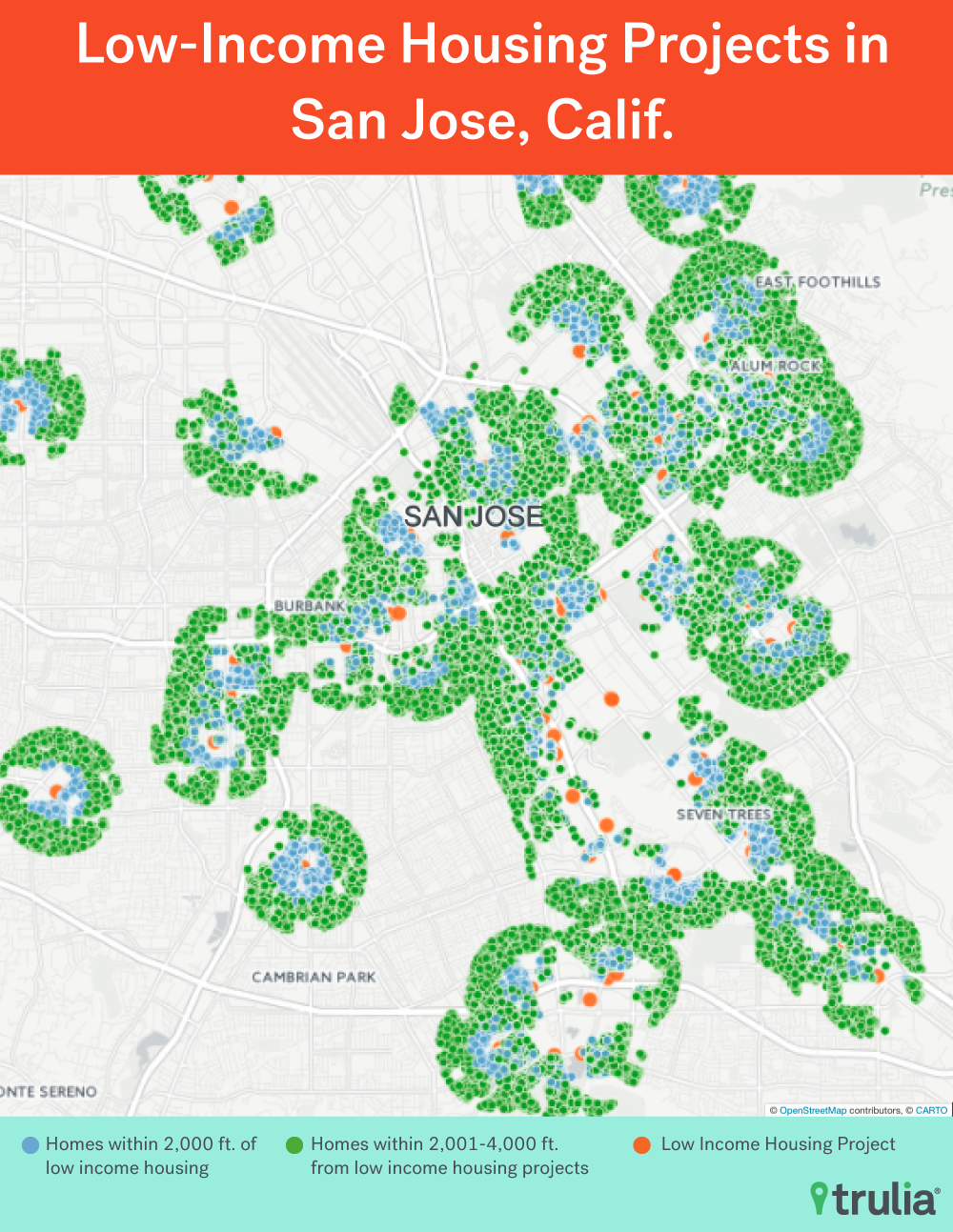 If there was an effect from the placement of a low-income housing project into a neighborhood, we would expect to see a drop in prices in the inner ring (red line) compared to the outer ring (blue line) after the project is completed (year 0). In terms of median price per square foot, the inner and outer distance buffers track closely together as shown in the figure below.

Why did values diverge in some places?

[1] Indeed, the concentration of affordable housing development in certain areas seems to have exacerbated an unequal geography of where low-income residents have settled in the Boston area according to a recent report by the Boston Globe. 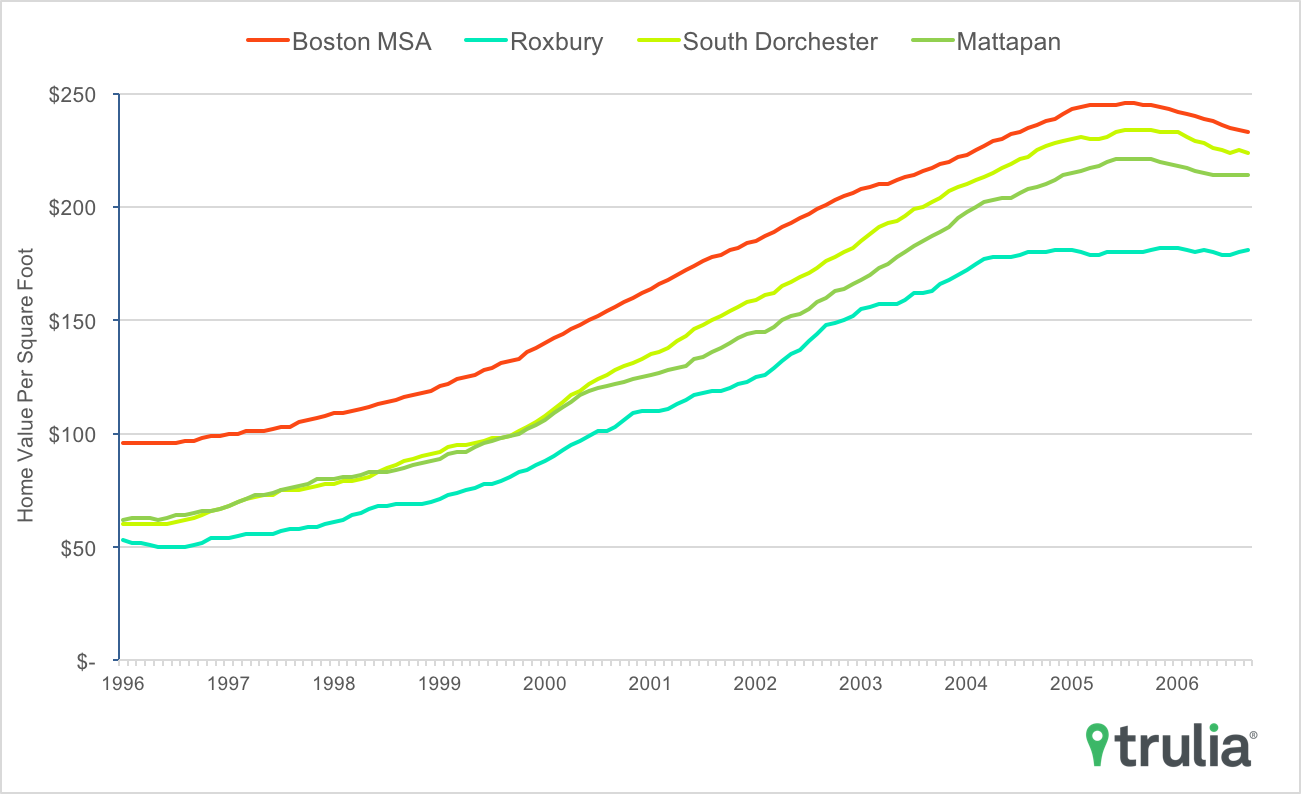 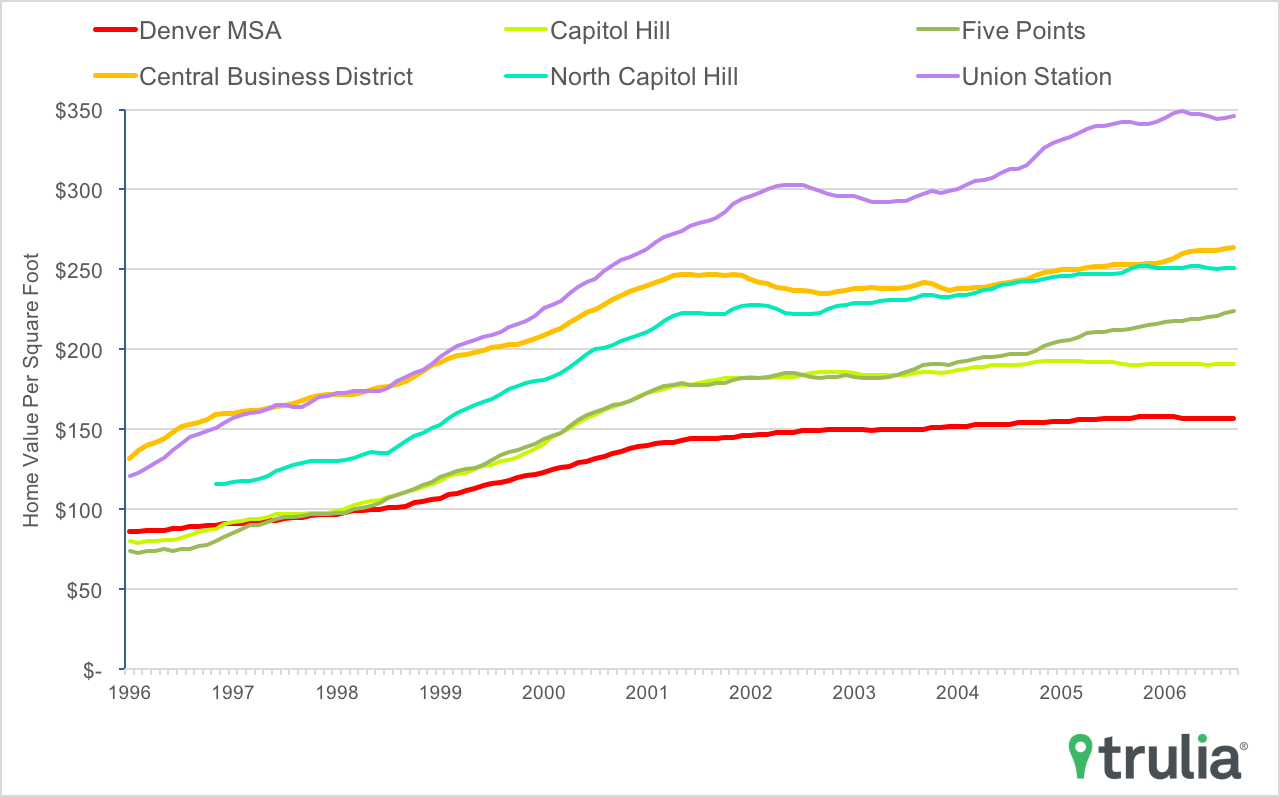 What does it mean?

This post has been corrected to reflect that it is the U.S. Treasury Department that administers the LIHTC program. An earlier version of this post said HUD administered the program.

Using the latitude and longitude of these projects, we constructed two distance buffers—one up to 2,000 feet from the project, and another from 2,001 to 4,000 feet. We then identified homes within these buffers and captured Trulia home value data for each of these homes from 1996 to 2006. Trulia home value data is collected as an annual snapshot on June 1st of each year. In order to avoid large shifts in prices from new construction, we only include homes with property records for the entire time period under study. The analysis in this report uses home value per square foot in order to control for changes for housing quality and mix as well as potential changes in value from renovations during the study period.

We use a basic differences-in-differences regression framework to estimate the difference in home values in the inner ring compared to the outer ring after the LIHTC project is placed into service. Differences-in-differences offers a way to identify the effect of a policy by examining relative changes in outcomes in treatment and control groups. In this report, the treatment group consists of those homes located in the inner ring, or nearby the LIHTC projects, and the control group are those in the outer ring. The assumption is that these homes, on average, only differ in terms of their relative proximity to the LIHTC project. Note that after plotting the median home value per square foot of the two distance rings before and after the project, we felt confident home values between distance rings prior to the time projects were placed into service shared common trends. The treatment occurs once the project is put into place, so the differences-in-differences reflects the difference between the treatment group and control group (a proxy for the counterfactual) in the post-treatment period compared to the pre-treatment period.

In order to control for idiosyncratic differences in home values within years and different metro areas, we include year fixed effects (and metro fixed effects for regressions containing projects across all 20 metros). Additionally, we implement cluster-robust standard errors on individual LIHTC projects in order to correct for likely correlation of errors terms within the clusters. Our results yielded differences that were statistically significant in three metro areas. In Boston and Cambridge, the estimated effect of living near LIHTC projects was -$18.05 and -$19.05 per square foot. In Boston the effect was significant at the 99% confidence level and in Cambridge at the 95% confidence level. In Denver the estimated effect was $7.35 and significant at the 95% confidence level.