While it may still be true that “nobody walks in L.A.,” public transit is an increasingly popular option, and one that home sellers are taking note of—the share of home listings mentioning transit keywords has almost doubled in just five years. And in many cases, including a transit shout-out in a listing description can net a home seller a little extra scratch for bus fare.

The share of Los Angeles County listings on Trulia mentioning transit-related keywords rose from 2.3 percent in 2013 to 4.5 percent last year, according to a Trulia analysis, a still-small but rapidly growing fraction that coincides with ongoing improvements in the city’s transit network. And in all but the most-expensive market segment (price quartile), homes overtly boasting of nearby transit access sell for about 4.2 percent more, on average, than similar-sized homes that don’t.

Los Angeles is infamous for its sprawl and car culture. But the city is actively promoting alternatives to private automobiles, and mobility in and around L.A. has changed dramatically in recent years. Santa Monica is actively experimenting with electric scooters in its Shared Mobility Pilot Program, and L.A. taxpayers have pledged $120 billion toward expanding public transit.

And home sellers, particularly those near the city’s growing rail network, are taking note.

Looking at exactly which keywords are used, and where, gives us a clue as to why more L.A.-area listings are boasting of transit access. Although L.A.’s buses account for significantly more total passenger miles than rail, rail represents a disproportionate and growing share of transit keywords. Rail keywords appeared in 1.5 percent of all listings in 2013 and 3.7 percent in 2018, while bus mentions have remained stable (0.8 percent of listings in both 2013 and 2018).

This data is reinforced by examining not just which kind of descriptors are used in a listing, but also where that listing is—and the highest densities of listings mentioning transit also track closely with the routes of L.A.s Metro lines. One possible explanation for the surge over the past few years may be that the Gold and Expo Lines’ recent expansions have made these routes, and the system at large, more useful. Indeed, as a share of total listings, references to the Gold Line far outstripped all others from 2013 to 2018. Over the same period, the Expo Line’s share of total listings has grown fastest. Metro’s upcoming Regional Connecter project aims to further integrate the existing transit lines.

Some neighborhoods in the east and northwest of the region have high concentrations of transit mentions despite lying some distance from Metro’s rail network. These neighborhoods seem mostly to fall into two categories: those with a Metrolink commuter rail station and a few with an unusually heavy concentration of listings commenting on nearby bus stops.

A shift in broader preferences towards the urban lifestyle could be another possible explanation for the increasing use of transit keywords. Nationwide, 16 percent of respondents to a recent Trulia-sponsored survey cited a lack of public transportation as an issue in their current neighborhood. 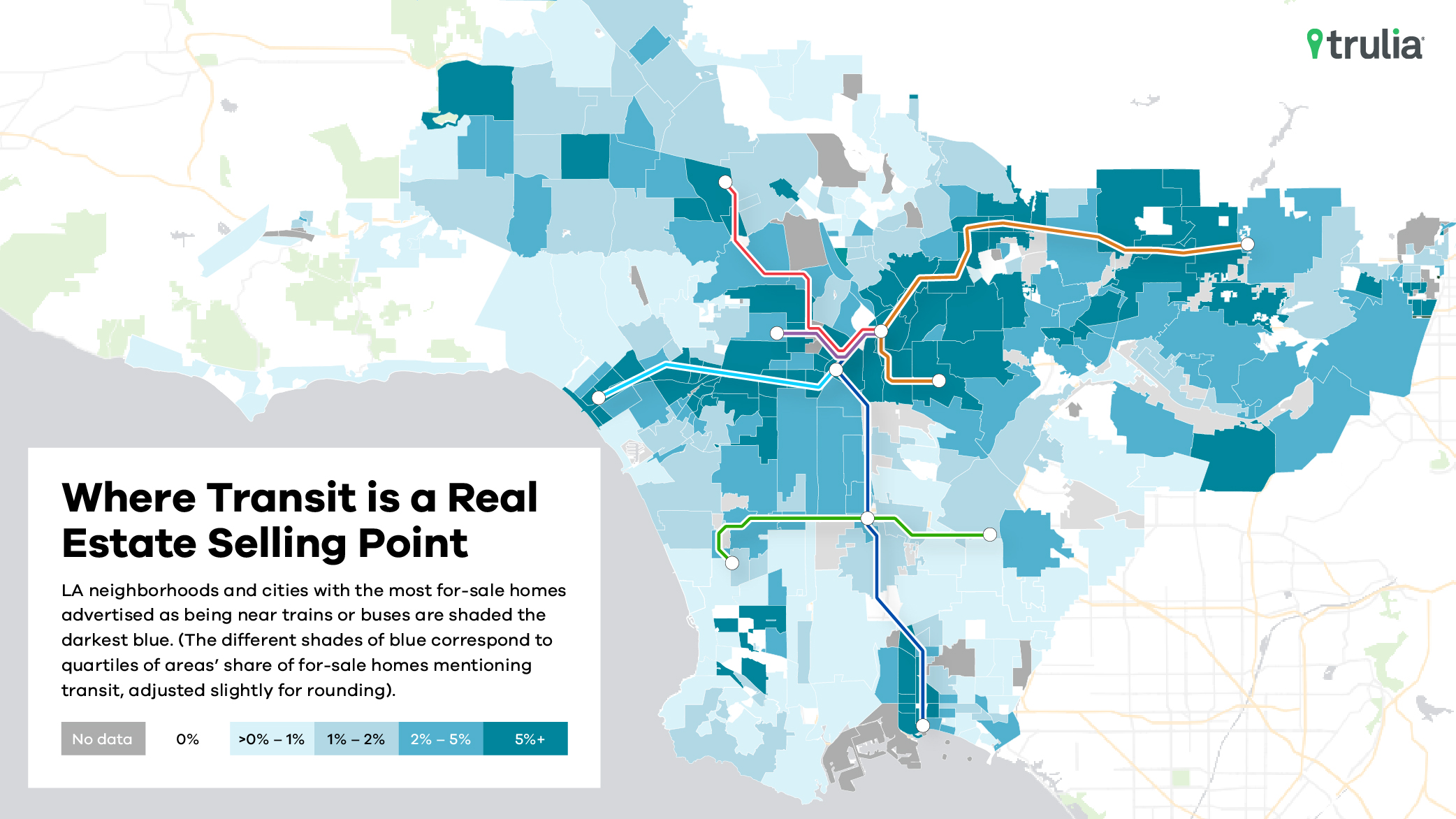 Note: Shading is defined for each area by the share of listings from 2013 to 2018 with transit keywords. Boundaries represent either municipal boundaries or LA County neighborhoods defined by Trulia. Geographies with fewer than 12 listings between 2013 and 2018 are left unshaded because of an insufficient sample size. Metro station coordinates downloaded from Metro’s GIS data page.

But while increasing mentions (and presumably usage) of transit may make for a slimmed-down carbon footprint and greener city, sellers are primarily interested in fattening their wallet with a different kind of green. Luckily for them, transit pays in this regard, too. On average, the cheapest three-quarters of listings sell for about 4.2 percent more than similar-sized homes if a transit keyword is included in the description.

Interestingly, the average price change turns negative for the most expensive quarter of listings that mention transit keywords. Even controlling for the number of bedrooms, bathrooms, square footage and age, they sell for 10.5 percent lower, on average, than listings that don’t discuss transit. A possible explanation for the transit keyword effect reversal among more-expensive properties is that amenities commanding a premium in this price category (and not accounted for in our simple model) tend to be more common in homes farther from transit.

This surge in home listings boasting of their proximity to transit is notable, but a dose of reality is important here: With less than one in 20 listings even mentioning transit, it’s clear that the car is still king of the road in the nation’s second-most-populous market. And in a city synonymous with traffic jams, sprawl, smog and big-budget car chases, that makes sense. But while it may be unrealistic to expect wholesale culture changes to happen overnight, serious public investments and ever-evolving technology and preference shifts suggest that Los Angeles’ future might be at least partly on the rails.

Identification of listings with keywords related to public transit: Based on inspection of for-sale listings in LA County, we defined transit-related keywords to include the words “metro,” “subway,” “bus,” “Amtrak,” “train,” “rail,” as well as specific Metro Line names. The keyword searches included extensive filtering to remove false positive matches, such as “LA Metropolitan Opera” or “Subway sandwiches nearby.” Because the number of listings can vary each year, we focused on the share, rather than absolute number, of listings with transit keywords.

A shortcoming of our approach is that only the most recent listing description is available for each property. In other words, if a property were sold in 2015 and 2018, we can only observe whether its listing description contained transit keywords in 2018. Thus, our analysis implicitly assumes that listings with and without transit keywords sell (and rent) at similar rates. While this assumption may not strictly hold, the magnitude of the findings—a doubling in the share of listings with transit keywords over six years—seems too large to be driven by disparate resale rates of homes with a high propensity for transit-mentions in their listings.

Estimates: The estimates reported in this study are drawn from the following regressions, using basic controls commonly found in hedonic models:

Log sales price is regressed on indicator variables for the presence of transit keywords at each price quartile, controlling for the number of bedrooms and bathrooms, finished square feet (including a second-degree polynomial term), the age of the home (including second- and third-degree polynomial terms), the year of the home’s sale, and the home’s price quartile for that year. The raw difference (with only price quartile controls) in average sales price for listings with transit keywords is an average premium of 2.8 percent, 5.8 percent, and 4.7 percent for the first, second, and third quartiles, respectively, and a decrease of 16.9 percent for the fourth quartile. See models (3) and (4) in Table 1 for raw and controlled regression output, respectively.

To determine the average effect of transit keywords on log sales price for the cheapest 75 percent and most expensive 25 percent of homes, we used a regression similar to that described above. In this model, we replaced the individual quartile-transit-keyword interaction terms with an indicator for the interaction between transit keywords and either the first-through-third or the fourth quartiles. The raw difference (with only the price quartile controls) in average sales price for listings with transit keywords is a premium of 4.5 percent for the cheapest 75 percent of listings, and a decrease of 16.9 percent for the top 25 percent. See models (1) and (2) in Table 1 for raw and controlled output, respectively.

The division into sales price quartiles has the potential to induce selection bias, as the premium for transit keywords systematically shifts observations between quartiles. However, running similar regressions using predicted sales price without the transit keyword indicator variable yielded roughly similar results (that are available upon request).

These regressions considered a reduced universe of neighborhoods—only those where a Metro rail station existed before 2013. Focusing on these areas ensures we are looking at listings that are near enough to a rail station to support any claims of transit access as a local amenity. One alternative approach—including neighborhoods with newly added rail stations—is not a fair comparison because rail was not a viable transit option for the entire 2013–2018 period. A third approach, including neighborhoods with bus stops but without a rail station, would muddle the analysis because of changes over time in bus routes and frequency.