Fewer foreigners overall are searching for a piece of the American Dream than last year, but for some countries there’s growing interest in finding a place to nest in the U.S.

Searches originating from foreign countries for all active for-sale and for-rent properties on Trulia from July through September fell to 1.8 percent of all searches, from 2 percent in the same period in 2017.

People searching from Canada and the United Kingdom still make up the most international searches, but their share of searches have fallen since last year.

International house hunters gravitate to large markets like New York, Los Angeles and Chicago – and to markets in sunny Florida, which attract more than a quarter of all searches from abroad. It boasts five slots among the 15 metros most searched by foreigners: Miami, Orlando, Fort Lauderdale, Tampa and West Palm Beach.

The warm weather and beaches of Fort Lauderdale, Tampa and West Palm Beach beckon to snowbirds and retirees from Canada, accounting for 21.9 percent, 19.5 percent and 25.1 percent of all searches from our neighbors to the north, respectively. Miami and Orlando are popular with real estate searchers in Brazil. In fact, Disney-loving Brazilians make up nearly a third of all foreign searches into Orlando. 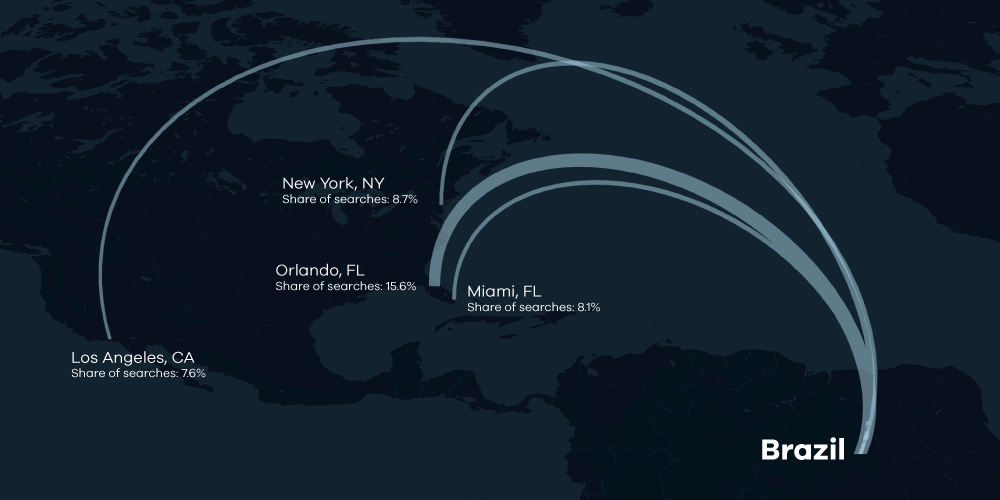 Many U.S. markets have large shares of searches from nearby countries —a testament to Tobler’s First Law of Geography which states that “near things are more related to distant things.” San Diego and Houston, for example, receive the highest share of searches from Mexico. A whopping 60.1 percent of searches in El Paso, Texas, which sits on the border with Mexico, originate from south of the border. Likewise, 45.2 percent of searches in Buffalo, N.Y., which hugs the Canadian border in upstate New York, come from the Great White North. 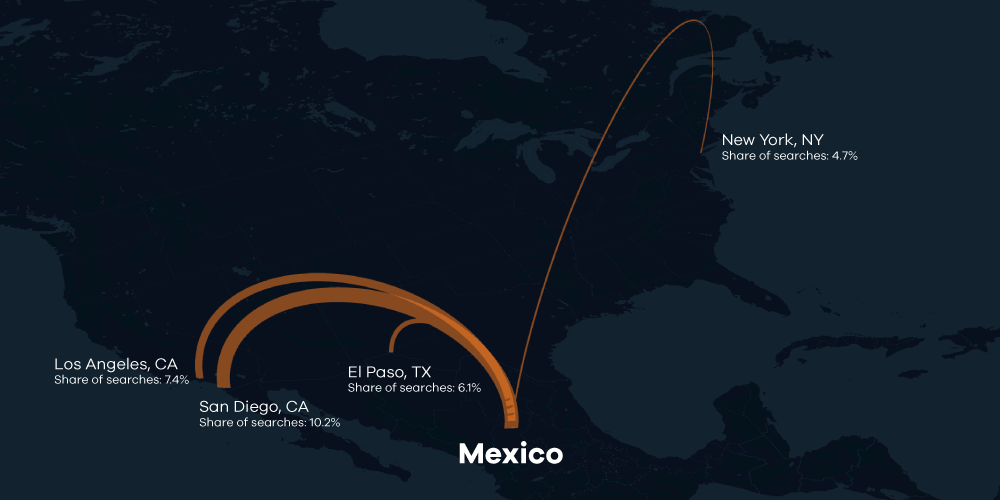 The greatest share of foreign visits to Atlanta are from South Korea, which comes as no surprise given that the metro area is home to thriving Korean population, with its own Koreatown and South Korea-headquartered Kia located its U.S. manufacturing base nearby. Given the share of searches (from Korea) across the U.S., search intensity from South Korea into Atlanta is about 60 percent higher than expected. But some countries have disproportionately high shares of searches given how many people are searching from these countries nationally. In many cases this is due to the fact that these metros contain an outsize share of people from these underrepresented countries. Atlanta has the 4th highest population of Liberians among the nation’s 100 largest metros, for example, and searches from Liberia into Atlanta constitute 0.4% of all searches but are 6.25 times expectation.

Search activity is based on visits to active for-sale and for-rent properties on all Trulia platforms from July 1 to September 30, 2018. Year-over-year comparisons examine the same time period from 2017. Outsized search volumes by metro are calculated using the following formula: