Today, the U.S. Census released the first batch of data from the 2015 American Community Survey (ACS), which among other things, gives us a wealth of new data about economic and demographic changes at the metropolitan level. Following Tuesday’s surprisingly promising report on Income and Poverty in the United States that show incomes grew at highest annual pace on record, we took a look at the newly released ACS data to see how income growth in 2015 was distributed among U.S. metros. There is yet another surprise: the metros with the lowest incomes experienced the highest income growth in 2015, suggesting regional income convergence is picking up. While middle-income metros also experienced solid income growth, rising home prices in these markets erased any such gains.

First, let’s take a look at places that had the highest income growth between 2014 and 2015. What’s surprising is that most of these metros – with the exception of Seattle – are not high-income markets. In other words, metros that were driving the 5.2% increase at the national level were some of the poorest markets, not the wealthiest. Nashville, Tenn.,  Birmingham, Ala., and El Paso, Texas, lead the pack with growth of 10.2%, 9.4%, and 8.7%, respectively, while notably high income metros in the San Francisco Bay Area and the Northeast didn’t make the list. In fact, the only two California markets to make the are the lower income metros of Fresno, Calif., and Bakersfield, Calif. What’s more, income growth in nine of these 10 markets actually outpaced housing price growth, which is good news for first-time homebuyers trying to save up for that ever elusive down payment. 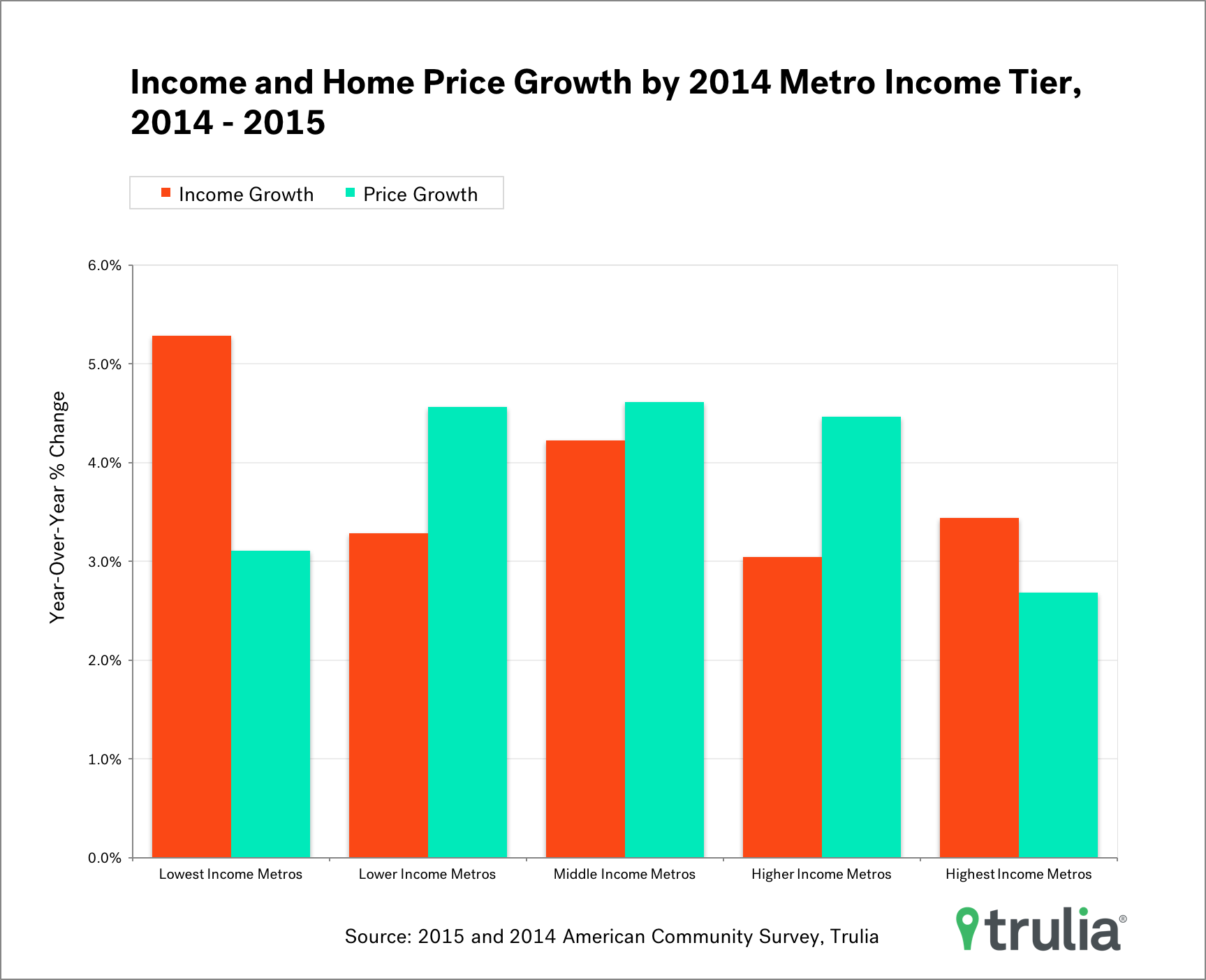 We’re also seeing regional income convergence taking place more broadly across the country. Income convergence – that is, when income growth in lower income areas is larger than higher income areas – is important because it’s an indicator of how geographically even prosperity is distributed across the country. Regional convergence indicates more even geographic distribution of prosperity, while regional divergence indicates unevenness. At 5.3%, incomes in the lowest income metros actually grew faster than incomes in all others. And not only are incomes growing fastest in the lowest income metros, they’re also growing substantially faster than housing prices, which grew at 3.1%. Despite strong income growth in middle-income metros, home prices are still outpacing income in these markets. While incomes in the highest income metros also grew faster than home prices, the difference was small. Average income growth in the most expensive markets was 3.4%, only slightly higher than the 2.7% increase in prices.

Why are incomes growing? It’s tough tell at this stage, but we’ll have a much better idea when individual ACS survey records are released later in the year. In general, though, income growth can rise for a few different reasons. First, incomes tend to rise as the unemployment rate drops, the unemployed land jobs, and employers raise wages to attract labor. Second, incomes can increase because of increases in labor productivity, either because employees increase their skill base or because advancements in technology help workers be more productive. Last, incomes can rise because of firm and labor migration. As firms open new locations and bring new employees with them, the multiplier effect of local spending generates more opportunity for supporting business, even if new employees aren’t paid any more than existing ones. While we can’t be certain which processes are dominating in individual markets, near full employment at the national level is certainly helping increase wages regionally.