What does 2015 have in store for the housing market? Nine years after the housing bubble peaked and three years after home prices bottomed, the boom and bust still cast a long shadow. None of the five measures we track in our Housing Barometer is back to normal yet, though three are getting close. The rebound effect drove the recovery after the bust, but is now fading. Prices are no longer significantly undervalued and investor demand is falling. Ideally, strong economic and demographic fundamentals like job growth and household formation would take up the slack. But the virtuous cycle of gains in jobs and housing is relatively weak, and that will slow the recovery in 2015. All the same, consumers are optimistic, according to our survey of 2,008 American adults conducted November 6-10, 2014.

Consumers Expect 2015 To Be Better, Especially for Selling a Home

Consumers are as optimistic about the housing market as at any point since the recovery started. Nearly three-quarters — 74% — of respondents agreed that home ownership was part of achieving their personal American Dream – the same level as in our 2013 Q4 survey and slightly above the levels of the three previous years. For young adults, the dream has revived: 78% of 18-34 year-olds answered yes to our American Dream question, up from 73% in 2013 Q4 and a low of 65% in 2011 Q3. 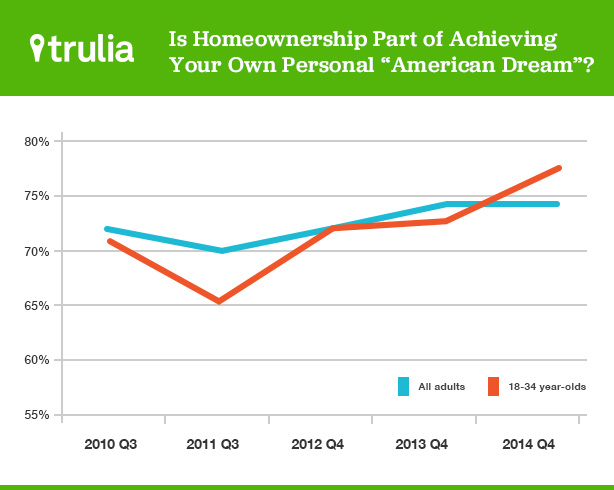 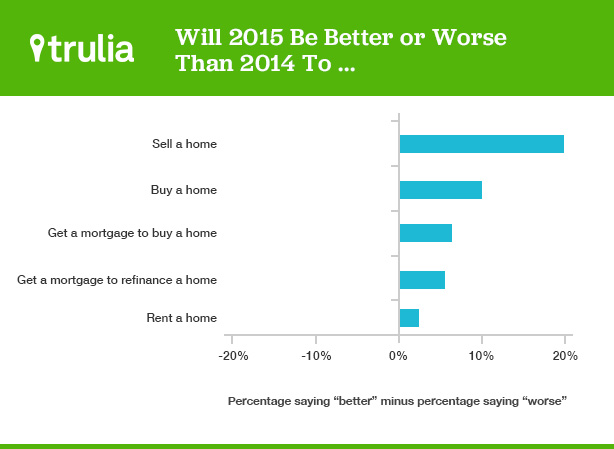 Despite this optimism, barriers remain to homeownership. Saving for a down payment is still the highest hurdle, as it was last year, followed by poor credit and qualifying for a mortgage. Not having a stable job has become considerably less of an obstacle, dropping to 24% this year compared with 36% last year thanks to the recovering job market. But affordability has become a bigger obstacle. Some 32% of respondents cited rising home prices, compared with 22% last year. 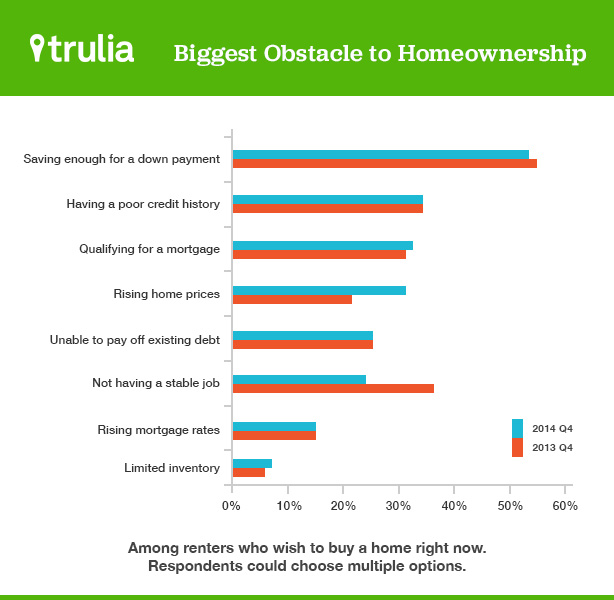 Housing Recovery in 2015: Rebound Effect to Fade Before Fundamentals Can Take Over

Different engines power each stage of the housing recovery. During the early years – roughly 2012 to 2014 – the rebound effect drove the recovery. Investors and other buyers scooped up undervalued homes and took advantage of foreclosures and short sales, boosting overall sales volumes. Local markets hit hardest in the housing bust posted the largest price rebounds. Now, though, the rebound effect is fading. Price levels and price changes are both approaching normal, foreclosure inventories are dwindling, and investors are pulling back. This is inevitable as the market improves and therefore shifts to slower, more sustainable price increases and a healthier mix of home sales.

So what replaces the rebound effect in the next stage of the housing recovery? The market increasingly depends on fundamentals such as job growth, rising incomes, and more household formation. But here’s the hitch: These fundamental drivers of supply and demand haven’t returned to full strength. They aren’t able to fully take the reins from the rebound effect. Importantly, the share of young adults with jobs is still less than halfway back to normal, many young adults are still living with their parents, and income growth is sluggish. This points to a tricky handoff, and means housing activity in 2015 might disappoint by some measures, though the rental market will remain vigorous.

Here’s what we expect:

If these predictions for 2015 sound similar to our predictions for 2014, you’re right. As the rebound effect fades and fundamentals take over, the recovery gets slower and the market starts to look more similar from one year to the next. But there’s good news here. Even though the recovery remains unfinished, the housing market is becoming more stable and more certain for buyers, sellers, and renters.

As the rebound effect fades, our 10 markets to watch have strong fundamentals for housing activity. These include solid job growth, which fuels housing demand, and a low vacancy rate, which spurs construction. We gave a few extra points to markets with a higher share of millennials. These young adults are getting back to work and that will drive household formation and rental demand. We didn’t include markets where prices looked at least 5% overvalued in our latest Bubble Watch report. Here are our markets to watch, in alphabetical order: 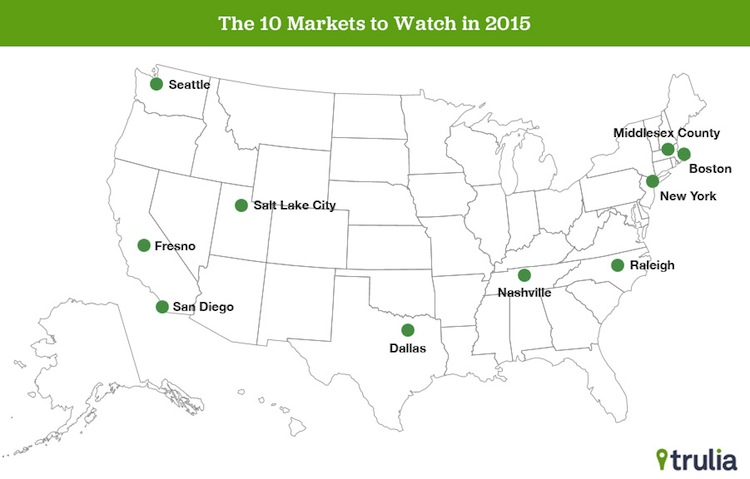 These markets are spread across the country: Boston, Middlesex County (just west of Boston), and New York in the Northeast; Dallas, Nashville, and Raleigh in the South (the Census considers Texas part of the South); and Fresno, Salt Lake City, San Diego, and Seattle in the West. No Midwestern metros make the list because they generally have slower job growth and higher vacancy rates than other markets, even though many are quite affordable and prices are rebounding.

In 2015, more markets will settle back into their long-term housing patterns. Fast-growing markets that boomed last decade, collapsed in the bust, and then rebounded are now leveling off. Even the markets that have been slowest to recover and have struggled longest are seeing foreclosure inventories decline and the sales mix moving back toward normal.

At the same time, first-time homeownership, single-family starts, and new home sales won’t come close to fully recovering in 2015. But if 2015 brings strong job growth, big income gains, and the long-awaited jump in household formation, then 2016 could be the year when we see a major turnaround in homeownership and single-family construction.