Abraham Lincoln proclaimed Thanksgiving a national holiday during the Civil War, in an attempt to restore peace and unity to the United States. In today’s diverse America, Thanksgiving remains widely celebrated and crosses religious, racial, and ethnic lines (though some Native Americans consider Thanksgiving a Day of Mourning), with Americans from different regions of the US and different countries around the globe bringing their own traditions to the Thanksgiving table.

Among the 100 largest metros, San Jose is the most diverse. San Jose is 35% White (the largest group), 31% Asian, 28% Hispanic, 3% two-or-more races, and 2% Black. In no other metro does the largest group have a share smaller than 35%. New York ranks second, with a population that is 39% White, 28% Hispanic, 19% Black, and 12% Asian. Four of the ten most diverse large metros in the U.S. are in California: San Jose, Oakland, Orange County, and San Francisco. Only one – New York – is in the Northeast, and not one is in the Midwest.

The map below shows the diversity index for counties across America. Diversity is highest in California and Hawaii, as well as much of the South. The least-diverse parts of the country (i.e. those with the highest share in the largest group), in contrast, are in New England and parts of Pennsylvania, Ohio, and West Virginia.  Among the 100 largest metros, Pittsburgh is the least diverse: it is 87% White, 8% Black, 2% Asian, and 1% Hispanic. El Paso also stands out as America’s least-diverse large metro that is not majority-White: El Paso is 82% Hispanic, 13% White, and 3% Black. Hispanics are the majority in Fresno, San Antonio, and Miami as well. In none of the 100 largest metros are Blacks or Asians a majority. The metro with the highest percentage of Blacks is Memphis, at 45%, and the metro with the highest percentage of Asians is Honolulu, at 43%. 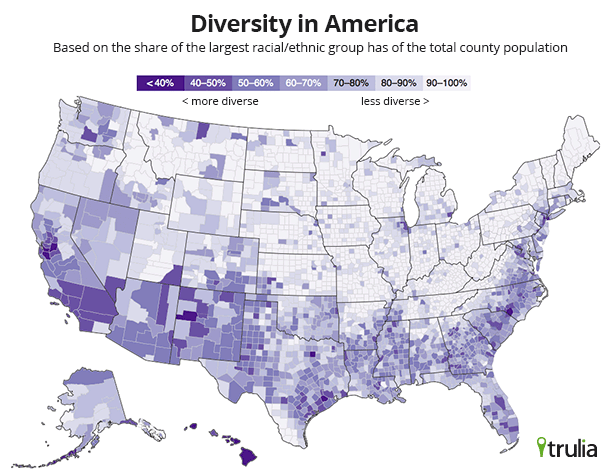 The diversity people experience day-to-day, though, depends on how diverse their neighborhood is. If members of a racial or ethnic group tend to live near each other in specific neighborhoods, even diverse metros could have mostly segregated neighborhoods. So let’s turn to diversity within neighborhoods, which we define as ZIP codes.

Here are the most diverse neighborhoods in the New York, Los Angeles, Chicago, San Francisco, and Washington metro areas. [See Appendix Below]

Do Americans want to live in diverse neighborhoods – or are they avoiding them?

We looked at changes in both occupied households (based on U.S. Postal Service data, just as in our recent post showing suburbs growing faster than urban areas) and home prices (based on homes for sale on Trulia) in the past year, comparing diverse neighborhoods, defined as those where no racial or ethnic group accounts for more than 50% of the population, and other neighborhoods. The more diverse neighborhoods have both higher population growth and stronger price growth in the past year – and they’re a bit more expensive to begin with:

Technical note: the 2010 Census asked two questions about race and ethnicity: one about Hispanic or Latino origin, and one about race. The official Census race categories are White; Black or African American; American Indian or Alaska Native; Asian; Native Hawaiian or Other Pacific Islander; and Some Other Race. People can select more than one race. People of Hispanic or Latino origin can identify as any race.

We follow the convention of many demographic researchers and create racial/ethnic categories that do not overlap. “Hispanic and Latino” and “two or more races” are both considered separate categories. Using this approach, the U.S. population is 63.7% White, 16.3% Hispanic or Latino, 12.2% Black or African American, 4.7% Asian, 0.7% American Indian or Alaska Native, 0.2% Native Hawaiian or Other Pacific Islander, 0.2% some other race, and 1.9% two or more races, for a total of 100%.

In this post, for simplicity, we refer to each racial or ethnic category by the first name or phrase used by the Census: White, Hispanic, Black, Asian, and so on.

See this report for more on how the Census asks about and reports on race and ethnicity.

Appendix: the most diverse neighborhoods in five major metros 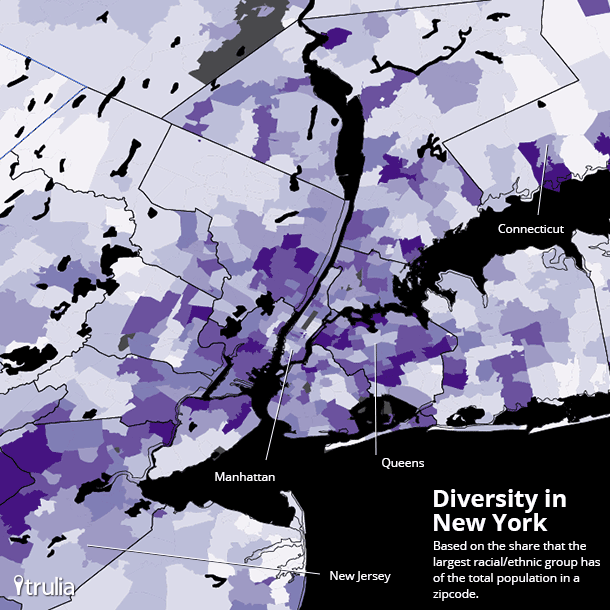 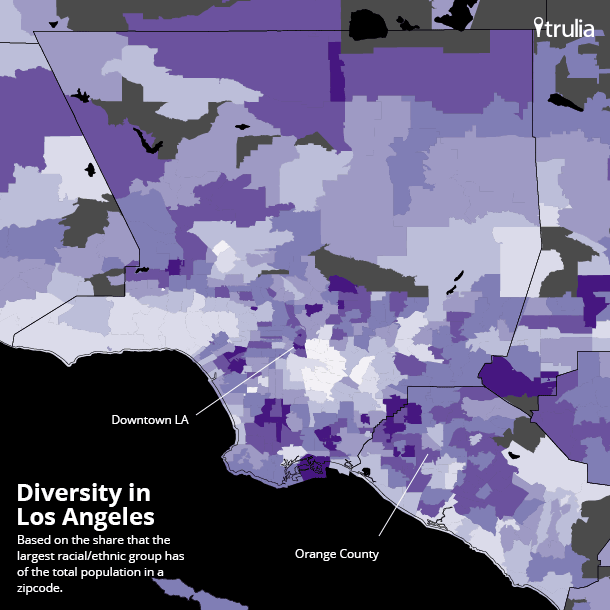 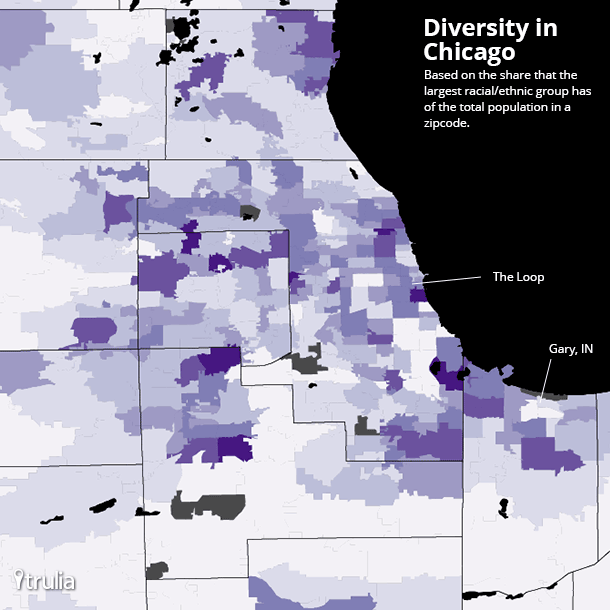 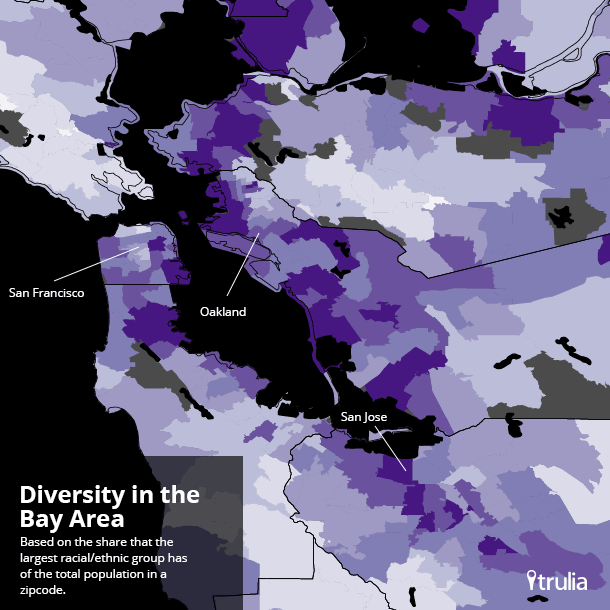 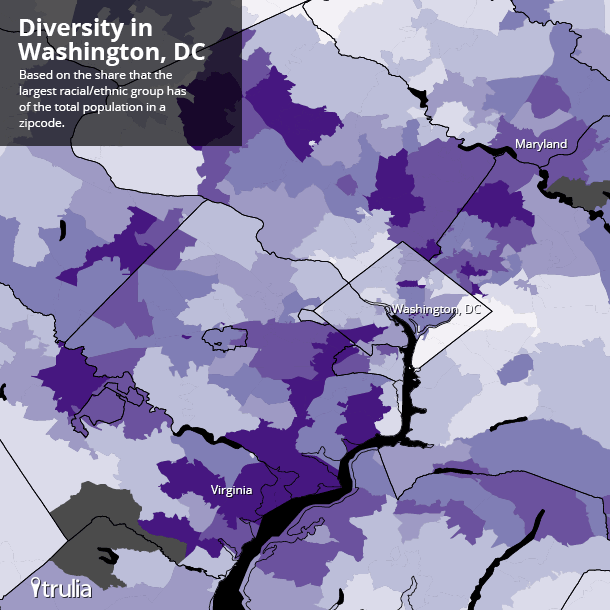