As the U.S. housing market has recovered from the Great Recession, homebuyers have been faced with declining inventory and worsening affordability. However, there are signs that some of the hottest markets on the Costly Coasts may be slowing down while slow-to-rebound markets in the Bargain Belt are finally heating up.

In this edition of Trulia’s Fastest Moving Markets Report, we not only look at how fast homes are moving off the market this home-buying season, but how those markets have changed over the past year. We found that:

Nationally, 66.6% of the homes listed for sale on March 6 were still on the market on April 6, which is down from 67.8% for the same period last year. However, not all segments of the market move alike: fluctuations in inventory – which affects the time that homes stay on the market – can behave quite differently within different price points (starter, trade-up homes, etc.).

To see how quickly homes are moving by segment, we evenly divided all homes in each of the 100 largest U.S. metros into three price tiers and gave each metro its own price cutoffs based on what’s considered high-end, mid-range, and low-end – what we call premium homes, trade-up homes, and starter homes, respectively. We then counted the share of each that was still on the market after one month. 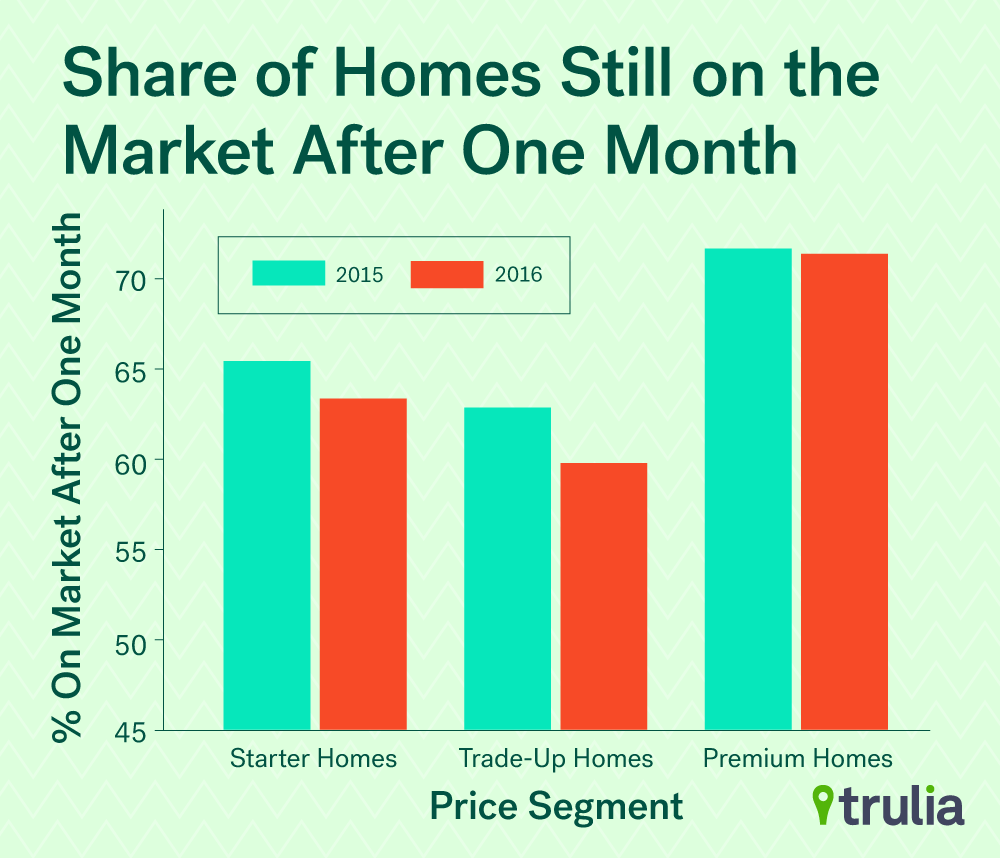 The bad news for first-time homebuyers is that the pace at which starter and trade-up homes are moving has quickened much more than premium homes. Last year, 65.5% of starter homes were still on the market after a month, compared with 63.4% this year. Trade-up homes are moving even faster, moving from 62.9% still on the market last year to 59.8% this year. On the other hand, premium homes have barely budged, having increased slightly to 71.5% from 71.8%. Much of this is likely due to the fact over the past few years, inventory of both starter and trade-up homes have fallen much more than premium homes. However, the national trend hides big differences from one local market to another. In some metros, the sales pace is quickening, while slowing in others.

Homes Coming off Market Much Slower in Bay Area, Houston

The San Francisco Bay Area still reigns as the region with the fastest moving markets, with San Jose, Oakland, and San Francisco topping the list. In fact, less than 42% of the homes for sale in these three metros remained on the market after one month. But there is consolatory news for homebuyers in the Bay Area: the the pace at which homes are coming off the market is slowing.

However, the slowdown in the Bay Area was eclipsed by the massive slowdown in Houston, which experienced a drop to 66.2% of homes on the market after a month last year to 50% this year. What’s causing this? Falling oil prices are a big factor. In fact, the sustained drop in oil prices hasn’t just hit Houston. Four of the five metros with largest share of employment in oil and natural gas extraction have also seen a slowdown. The share of homes still on the market after one month in Oklahoma City, Tulsa, and Forth Worth, Texas, has increased – albeit modestly – between 1.6 and 2.3% points. And Bakersfield, Calif. – which has the nation’s largest share of employment in the oil industry – was flat year-over-year.

Collectively, the five largest oil towns in the U.S. slowed down 9.6% points over the past year, while the 95 non-oil towns saw a slight pickup year-over-year by 1.8%. Most of the collective slowdown in oil towns was due to the massive slowdown in Houston, rather than a systematic causation between oil and housing. This is due to the fact that even in metros with the largest share of employment in oil-related industries, the share is no more 6.3% – a relatively small amount that may not be enough to have major effects on local housing markets.

Homebuyers Can Take Their Time East of the Mississippi, But Need to Move Faster

While homebuyers in the West need to move the fastest, those east of the Mississippi don’t need to rush. Seven of the 10 slowest moving markets are there. Households wanting to take their time in the home-buying process can do well on either side of Long Island Sound. Fairfield County, Conn., and Long Island, N.Y. are the two slowest moving markets in the U.S., where 78% and 76.9% of homes are still on the market after one month, respectively. Homebuyers won’t also have to go far west of the Mississippi River to find the other three non-Eastern metros that are moving slowest: include Tulsa, Little Rock, Ark., and El Paso, Texas, where no fewer than 75% of homes are still on the market after a month.

Although homes move slowest East of the Mississippi, they are moving much faster than last year. Of the top 10 markets that have seen the largest pickup in the pace to which homes move off the market, eight are East of the Mississippi River. Long Island, N.Y. – the second slowest moving market – has sped up the most over the past year, moving from 88.6% of homes on the market after one-month last year to 76.9% this year. The only two markets west of the Mississippi to see the largest pickup are Colorado Springs and Kansas City, Mo. The South also has large representation in the markets with the biggest pickup, with Charlotte, N.C., Louisville, K.Y., Atlanta, and Raleigh, N.C., making the list. The only market west of the Rockies to come close is Portland, Ore., which ranked 16th and experienced a pickup of 5.4 percentage points.

So what drove the speed of markets during the past year? Inventory. While other factors – such as employment growth, wage growth, and population growth all play a role – changes in inventory are strongly correlated with changes in how long homes are staying on the market. 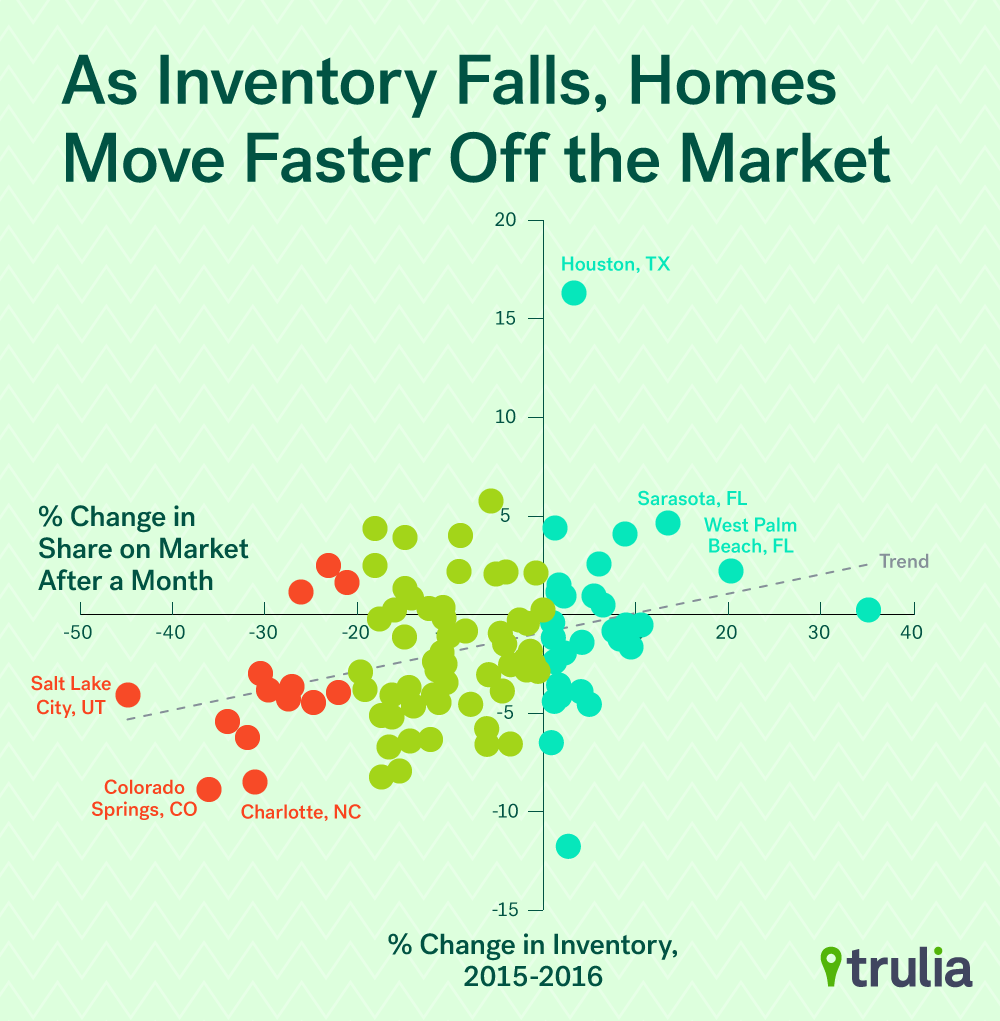 Of the 100 largest U.S. metros, those with larger drops in inventory over the past year have seen more homes moving off the market after a month. For example, Colorado Springs has experienced a 35.7% decrease in inventory over the past year while the share of homes still on the market after a month fell 8.8 percentage point from 62.% in 2015 to 53.2% in 2016.. On the other hand, Sarasota, Fla. has seen a noticeable slowdown in home coming off the market after 30 days while also seeing a relatively large year-over increases of inventory.

All and all, this offers both good news and bad news for homebuyers. Homes are moving off the market slightly faster this year than last at the national level, but there are dramatic differences across individual markets. Home hunters East of Mississippi can still take their time but will need to move slightly faster than they did last year. Meanwhile those in the West won’t need to move as frantically as they did last year, but they will still need to move quick to get their dream home.

To find out how long homes are staying on the market, we calculated the share of homes for sale on Trulia over a one-month period. We first looked at homes listed on March 7, then counted how many were still for sale on April 7. Faster-moving markets had a lower percentage of homes still on the market after two months, while slower-moving markets had a higher percentage.

Our one-month measure is similar to a common housing statistic: days on market (DOM). In general, housing markets with more inventory and fewer buyers will have a higher share of for-sale homes remaining on the market after one month and a higher median DOM. But we prefer our one-month measure over the widely watched DOM as a way to determine how quickly homes are moving in a market. Why? We think DOM is potentially misleading. If lots of new inventory suddenly lands on the market, then median DOM could fall thanks to all those newly listed homes. Thus, a low median DOM might indicate that buyers are snapping up homes quickly, so homes aren’t staying on the market long (a seller’s market). But it could also signal that a lot of new inventory has just come onto the market (a buyer’s market). As a result, it’s difficult to decipher what’s really going on based on DOM alone.