Last week, the U.S. House of Representatives Committee on Ways and Means released their Tax Cuts and Jobs Act bill that, among other things, caps the mortgage interest deduction (MID) at $500,000, caps the state and local tax (SALT) deduction at $10,000, and nearly doubles the standard deduction. However, yesterday the Senate released their own plan that retains the current $1 million MID but eliminates SALT deductions entirely. Both nearly double the standard deduction from $11,700 to $24,000. But what do these proposed changes mean for the housing market? At a high level, the bills cuts tax benefits for owners and buyers of expensive properties, but the two versions have meaningful differences in how they would impact the housing market.

A closer look suggests the impact would be mixed and dependent upon what actually gets passed. Under the House bill, homeowners with mortgages currently valued at over $500,000 will be grandparented in to their current MID levels. However, their property taxes aren’t, so they would experience an increase in their property tax liability on taxes paid above $10,000. Moreover, most homebuyers don’t purchase homes with mortgages and property taxes high enough to itemize (either under the existing code or new proposal), so they’ll not notice any new liabilities if the plan passes. But there might be some bad news: since homeowners would lose their grandparent clause if they moved, we think the already tight inventory situation might get worse in the country’s most expensive markets – especially those in California – if the bill passes in its current form.

Under the Senate proposal, the MID would stand in its current form, but all SALT deductions would be eliminated.  This means all existing homeowners and homebuyers would experience an increase in their post-tax property tax liabilities, but would be able to keep deducting their mortgage interest as long as their total itemized deductions are greater than $24,000. While the impact is likely to be felt across a broader spectrum of homeowners than the House plan, the Senate plan won’t potentially make the housing inventory crunch worse because there is no need for a grandparent clause that would disincentivize some households from moving.

As we found back in May, nearly doubling the standard deduction would mean some owners and buyers would not be able to itemize.

We set out to find out how these changes might affect U.S. housing markets. Our findings on the House Bill include:

Our findings on the senate bill include:

The good news is that most existing households wouldn’t be affected much by the Tax Cuts and Jobs Act bill. This is because according to the Tax Foundation, only about 30% of filers itemize, leaving 70% of American households potentially unaffected when it comes to housing. That said, 18.5% of homebuyers today would experience an increase in their home-related tax liabilities if the bill passes, either because they would be able to deduct less mortgage interest, less property taxes, or both. When it comes to the impact on existing homeowners, only about 2.5% of property owners would experience a decrease in their deductions if they moved because they hold mortgage balances above $500,000, but 9.2% of them will have an immediate increase with a higher tax liability because their property taxes are currently above $10,000 a year. While those these numbers may seem relatively small, they vary considerably by housing market.

While just 18.5% homebuyers and buyers are likely to impacted by the plan nationally, those that who will be are concentrated along our most expensive, coastal markets. When it comes to the share of homes on the market that are above $555,000 (which would translate into a mortgage of $500,000 or more assuming a 10% down payment), every major coastal market in California would be hit hard, as well as several markets in the Northeast. For example, buyers of 96.2%, 87.4%, and 81.9% of listings in San Francisco, San Jose and Orange County receptively, would experience an increase in their housing-related tax liabilities under the new tax plan, compared with of 54.3% and 54.1% of buyers in Cambridge, Mass., and Long Island, N.Y.

Property tax payers who will likely experience an increase in their property tax liability are concentrated in markets that have a combination of both high prices and high tax rates. The greater New York City metropolitan area will be hit particularly hard, as 46.5%, 33.7%, and 22.7% of property tax payers in Long Island, Newark, N.J., and New York, respectively, currently pay more than $10,000 annually in property tax and therefore will experience a decrease in property tax-related deductions if the current tax plan passes.

Not only would markets in California be particularly hit hard because they have a high share of listings above $555,000 and a high share of property tax payers with tax bills greater than $10,000, they also have the highest share of property owners in the U.S. with current mortgage debt above $500,000. This matters not because these owners wouldn’t be able to deduct their debt above $500,000, but rather they would be grandparented in doing so, which disincentives moving. As a result, we would expect much fewer existing owners to sell in these markets since they would lose the grandparent clause, thus possibly tightening the existing inventory crunch. For example, 23.6%, 21.1%, and 14.4% of property owners in San Francisco, San Jose and Orange County have current mortgage debt over $500,000, meaning that these households would be less likely to sell until their mortgage debt drops below this amount. Non-California markets that would also be impacted include Honolulu (10.9%), Fairfield County, Conn., (10.4%), and Washington (9.7%).

While a relatively large share of affected listings and households in these areas are important indicators of where the impact might be felt most, these numbers say little about how the financial benefits of homeownership compared to renting would be affected. To shed light on this, we calculated our rent vs. buy analysis for six different house prices in the affected purchase range ($500,000, $600,000, $700,000, $800,000, $900,000, and $1 million) and for two scenarios: one under the current tax code and one under the proposed one. We then calculated the difference between the two nationally and for each metro to find out how much it might impact the decision to rent or buy. 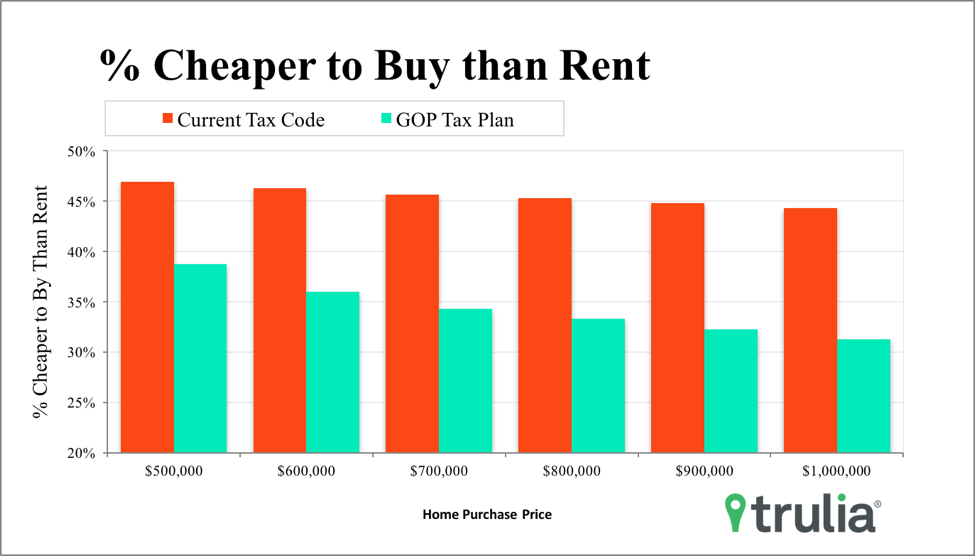 The good news is that, nationally speaking, the proposed tax plan does not make renting a home cheaper than buying one. At all price levels we looked at, buying a home still remains cheaper. That said, the financial benefits of doing so are reduced most for those looking to homes in the upper-range of the difference in cap amounts, and ranges from a reduction of 8 – 13 percentage points. It makes intuitive sense why the $1 million and $900,000 homes are hit hardest. After all, the mortgages taken out on these homes (again, assuming a 10% down payment) are the highest above the proposed $500,000 cap but still under the current $1,000,000 cap (we did not examine homes more expensive than the existing cap of $1 million, even though they would also be affected to some extent).

Analysis of the impact of the Senate proposal is much more straightforward than the House plan. Since the MID would remain capped at $1 million, homebuyers’ decision on how much to borrow would be unchanged. However, removing SALT deduction would incentivize both homebuyers’ and homeowners’ to look for less expensive properties since property taxes are an ongoing financial liability for owners. Like capping SALT deductions at $10,000 in the House plan, removing all SALT deductions would have the largest potential impact in markets where property taxes are high, either because home values are pricey or because property tax rates are. These markets are concentrated in high tax rate Northeastern states, such as New York, New Jersey, and Connecticut, and also pricey states such as California.

Like the House plan, the good news is that, nationally speaking, the Senate proposal tax plan does not make renting a home a cheaper than buying one. At all price levels we looked at, buying a home still remains cheaper. That said, the financial benefits of doing so are reduced even more than the House plan – between 7 and 15 percentage points. How can this be when the House plan caps both the MID and SALT deductions, while the Senate plan just cuts SALT deductions? Simply put, it’s because property taxes are perpetual liabilities for homeowner – the last for the entire tenure of ownership – while the benefits of mortgage interest only last until the standard deduction becomes higher than the interest paid, which isn’t perpetual. 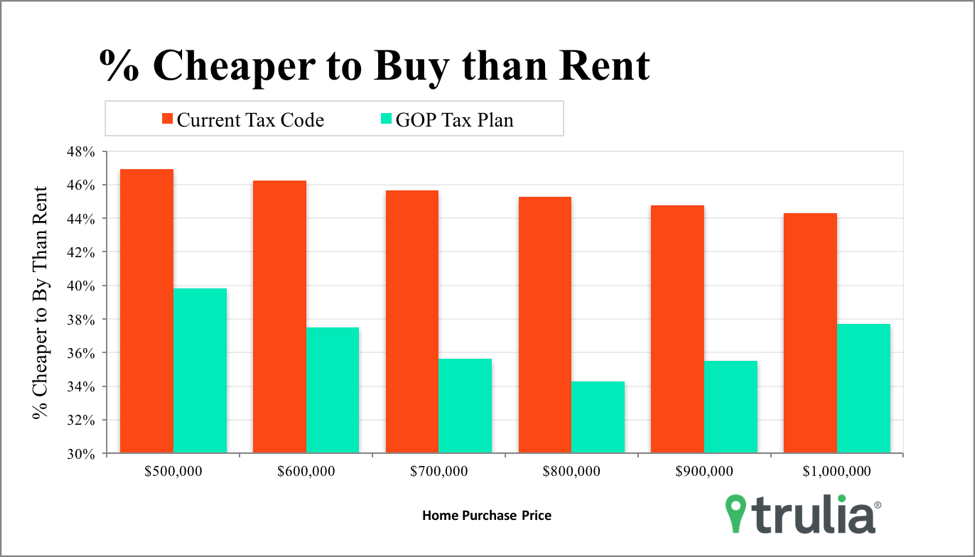 Do these findings mean that the housing market will be worse off under either plan? Overall, not so much.

With respect the House plan, we should expect the largest impacts to be noticed in the expensive coastal markets in California as well as high-property tax states in the Northeast. However, we don’t expect the impacts in these markets to be devastating because the fundamental financial benefits of buying a house compared to renting one doesn’t change enough to make renting a better option. This is for several reasons. First, the potential loss of MID and SALT deductions are at least partially made up for by the doubling of the standard deduction. Second, the equivalent rent that one would pay for higher-priced homes is high enough to make buying still look attractive. And third, most of the coastal markets have high historical levels of price appreciation, which helps homeowners build equity. Finally, the net impact on prices depends on the relative strengths of supply and demand forces because of this tax bill. On one hand, demand may fall somewhat for higher-priced homes because there will be fewer tax incentives to buy a home if the plan passes. At the same time, supply is likely to be reduced in this segment because the grandparenting clause will likely drive down inventory. Whichever force is stronger will dictate whether prices will rise, fall, or stay the same.

Despite the minimal headwinds the House proposal would bring, we think the Senate proposal might have fewer unintended consequences on housing inventory, which has been the thorn in homebuyers’ sides over the past few years. However, the impact on households’ bottom lines would be more widespread, since eliminating SALT deductions effects all homeowners and homebuyers alike and, in addition, would be felt over the lifetime of all homeowners tenure, unlike reducing the MID cap which would fade as homeowners pay down their mortgage balance. With either plan, however, we expect the fundamentally strong economic forces of job growth and wage growth to continue to support the housing market through these changes if they are passed.

Last, we calculate the financial benefits of homeownership for the 100 largest metros using our rent vs. buy methodology, which can be found here. We amended our normal assumptions and assumed a 10% down payment, and calculated the metric for six different house prices in the affected purchase range (the price at the proposed MID cap, $500,000, and then every price at $100,000 increments to the current MID cap of $1 million) and for two scenarios: one where buyers would be able to take the MITD and property tax deduction, and one without. We then examined the difference between the two for each metro to find out how much it might impact these homebuyers. We calculated the associated rents for each of those price points by taking the median rental value from Trulia’s rental estimates of homes priced within $20,000 of those six prices. In our rent vs buy calculation