In a year, the class of 2020 — current high school seniors — will head to college. Many will live on their own for the first time in either an on-campus dorm or an off-campus apartment, both of which will likely cost a pretty penny. So as students and their parents crunch the numbers on financial aid and student loans, they should also factor in cost of housing from the get go. As a first step, many will look to the school’s website for information — but how reliable are their cost estimates?

To find out, Trulia handpicked 20 universities across the country with sizable student populations, both private and public, many of which were located in higher-cost rental markets. We then looked up the estimated costs on each school’s website. Using Trulia’s rental listings, we calculated the median rent for apartments in the nearest ZIP codes surrounding each campus.

Students Need To Do their Own Homework on Housing Costs

In looking at the school’s estimated housing costs versus the actual rental listings near 20 colleges nationwide, Trulia found that schools often underestimate the cost of off-campus housing, sometimes by thousands of dollars for the school term. For instance, the University of California, Berkeley, estimated that it would cost a student $7,184 to live off campus. Trulia’s rental data shows that it would cost $12,375, assuming two people shared a two bedroom apartment for nine months.

The George Washington University in Washington D.C. estimated off-campus housing cost at $12,050 when students would each pay more than $14,000 to share a two bedroom for nine months. Checkbook toting parents may have gotten a nicer surprise in Austin, Texas. The University of Texas, Austin, estimated $11,456 in off campus costs. Trulia’s rental data indicates students would pay about $7,200 each if two students shared a two-bedroom apartment.

In general, we found that schools are not updating their estimated housing costs frequently enough, especially for neighborhoods with fast-rising housing costs. That means the costs listed on their websites do not accurately represent the local rental markets, and students and parents better do their own housing homework to avoid big budget-busting surprises. Likewise, if schools overestimate off-campus housing costs, they could needlessly drive students and parents to opt for on-campus housing. 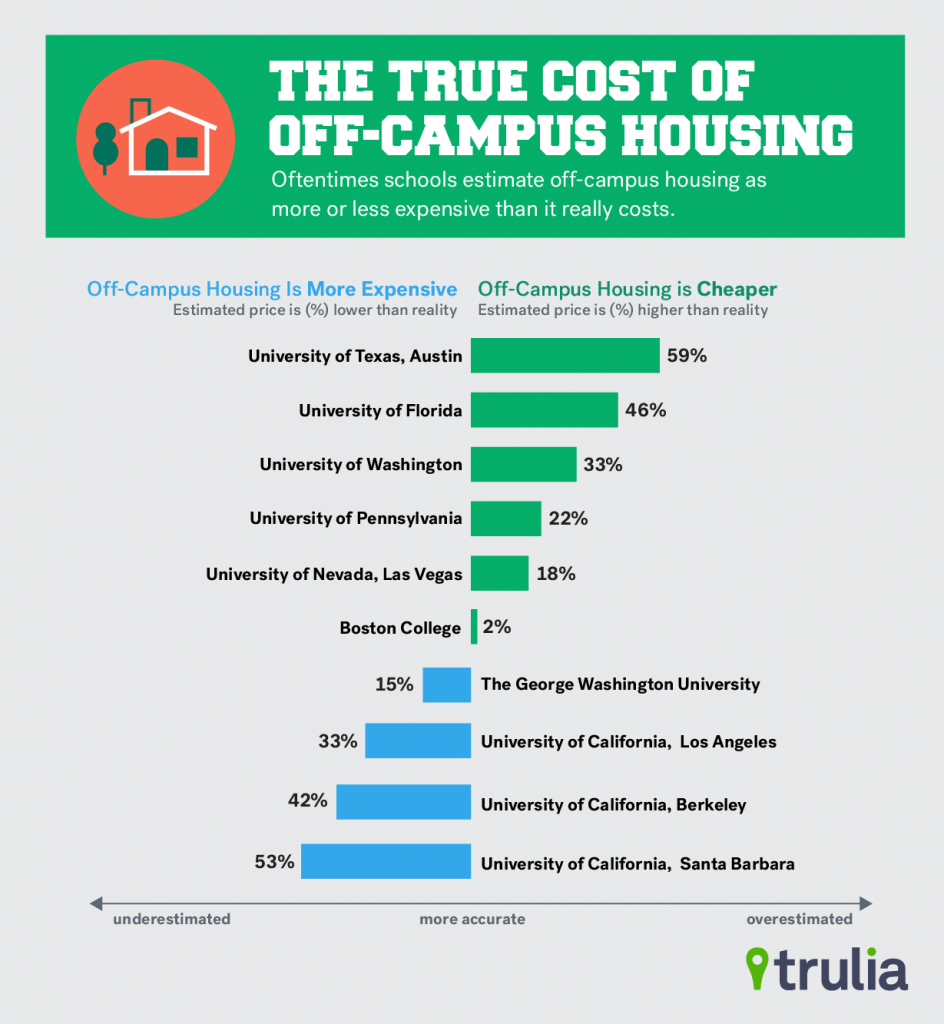 The biggest disparities in estimated off-campus rents versus Trulia’s calculations occurred at coastal California schools, which call some of the nation’s most expensive housing markets home. The University of California in Los Angeles estimated off-campus costs at $10,239. Trulia calculated the actual rent to be around $15,300 per student for a shared two bedroom for nine months and almost $20,000 for nine months if a student lived alone in a one-bedroom apartment. At the University of California in Santa Barbara, the school estimated the off-campus cost at $6,345. A shared two-bedroom near that school would cost $13,478 per student, our data shows.

Want the Rent as Listed on the School’s Website? Get More Roommates

In many of the rental markets around the universities that we looked at in this study, students would need to cram an extra person, or two, into their off-campus dwelling to pay a monthly rent cheaper than the cost being estimated by the school. By this, we mean they’d have two people sharing the cost of a one bedroom apartment, or three people splitting the cost of a two-bedroom apartment, and so on. 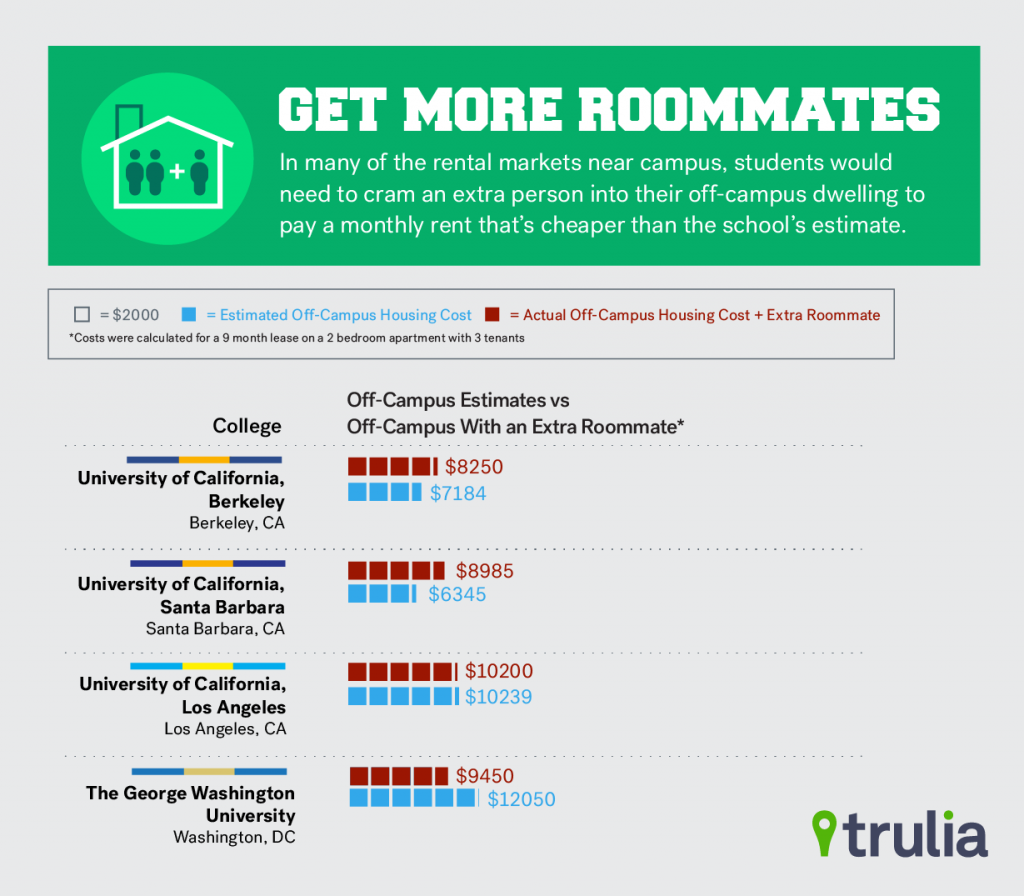 For instance, a student at the University of New Mexico would pay $8,690 to live on-campus and $3, 825 to share a two bedroom off campus for nine months. At the University of Texas in Austin, on-campus costs run $11,456 while a shared two bedroom off campus costs $7,200. At the University of Washington in Seattle, on-campus housing runs $11,310 vs. $8,528 per person for a shared two bedroom for nine months. However, in some cases, off-campus may not pay off if students have to pay for a 12-month lease and the extra three months of rent makes on-campus housing more affordable. In this case, they’d need to consider whether they are going to stick around for summer school or get a sublease. 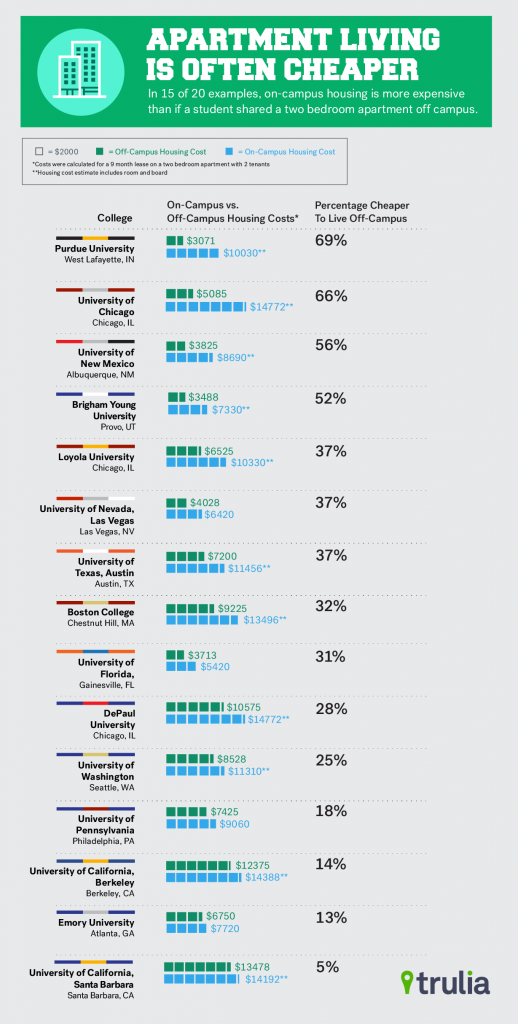 In Pricey College Towns, On-Campus Living Is A Deal

Living on-campus is cheaper at schools in some of the highest-priced rental markets. When comparing the advertised on-campus costs to those that a student would pay to share a two-bedroom, it is:

A Columbia student would pay more than $17,000 for nine months in a shared two-bedroom off campus. Campus costs there range from $7,418 to $9,470. The savings add up to thousands of dollars at Stanford, too. To live on campus there would run less than $9,000. To live off campus would cost more than $16,000 per student for nine months. 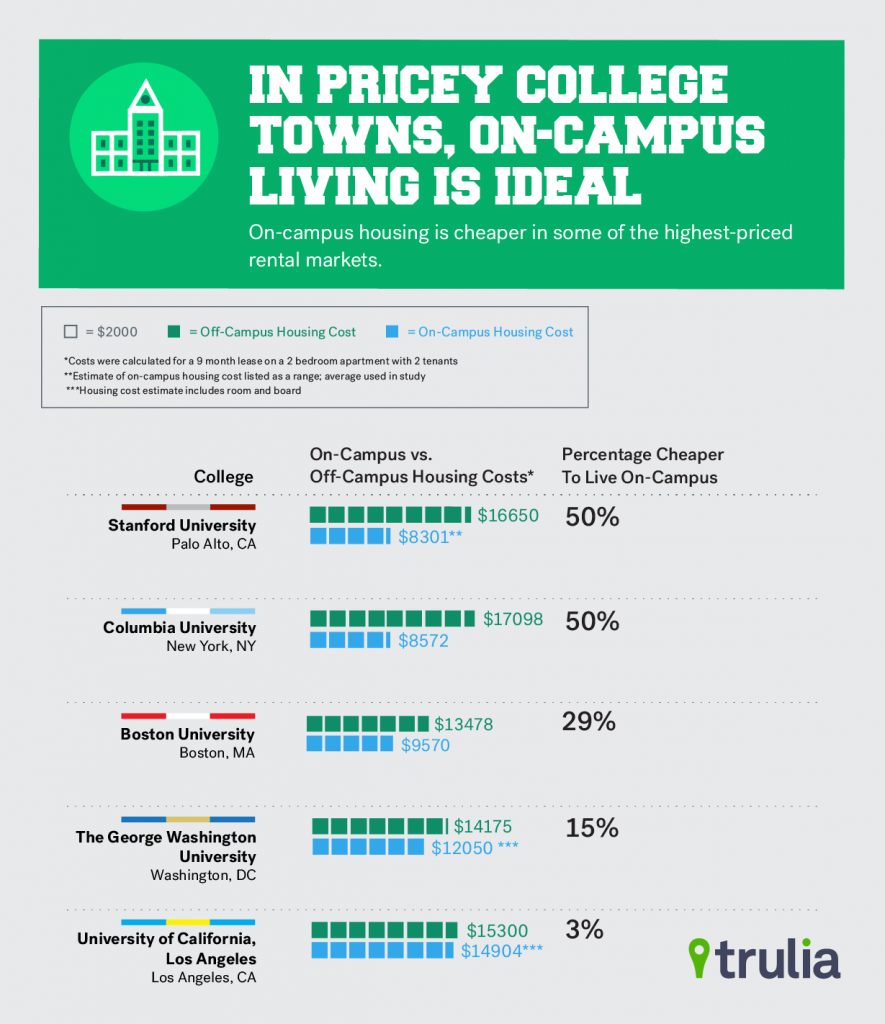 While not every college campus is located in a pricey rental market, students and parents must factor in housing costs into their budgets. Such planning will enable them to know exactly how much they will need in student loans and financial aid in order to obtain their degree. We recommend gathering as much info as possible on the current rate for on-campus room and board from school websites. Also, we recommend that students and parents manually search for off-campus apartments using tools like Trulia to better gauge what rents are in neighborhoods near the school.