Both these points are true: the Current Population Survey’s (CPS) Annual Social and Economic Supplement (ASEC) counts college students who are living in dorms as living with their parents, and college enrollment has indeed gone up. But it does not follow that basement-dwelling millennials are a myth. The ASEC and other Census data show that after adjusting for college enrollment and for dormitory living, millennials were more likely to live with parents in 2012 and 2013 than at any other time for which a consistent data series is available (1986 or 1990, depending on the data source). 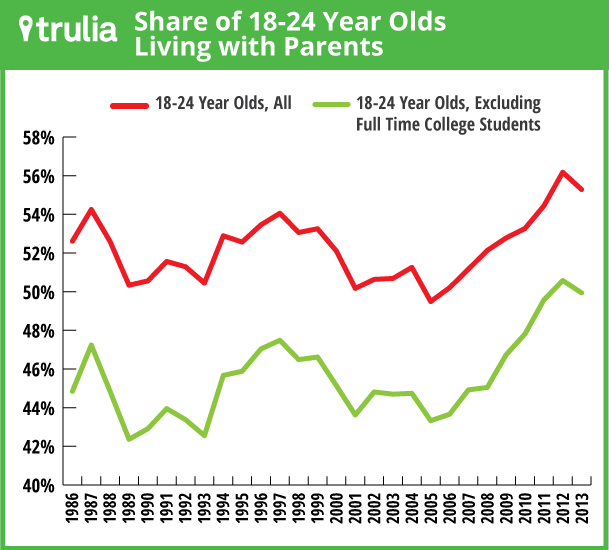 As a next step, we can look at older millennials (25-34 year-olds), who are much less likely to live in dorms or be full-time college students in the first place. They, too, were more likely to live with parents during the recession than before: 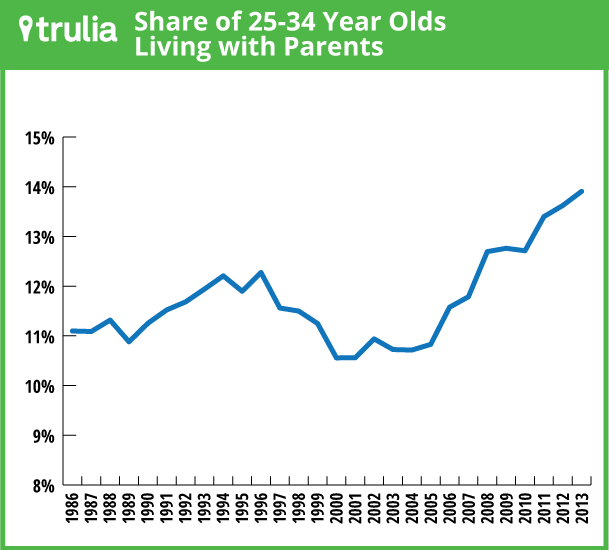 The share of millennials living with parents has risen sharply both among 18-24 year-olds who are not full-time college students and among 25-34 year-olds – two groups among whom few people are likely to live in student housing. Therefore, dorm living and rising college enrollment don’t account for the increase in millennials reported to be living with their parents.

Other Census surveys, including the annual American Community Survey (ACS) since 2006 and the decennial Census since 1990, go more in-depth about living arrangements. Both surveys include people living in “institutional group quarters” like prisons and nursing homes as well as “non-institutional group quarters” like military quarters and college/university student housing. Although these surveys don’t provide as complete a time series as the ASEC does, they do distinguish living in a dorm from living full-time with parents (including parents-in-law). 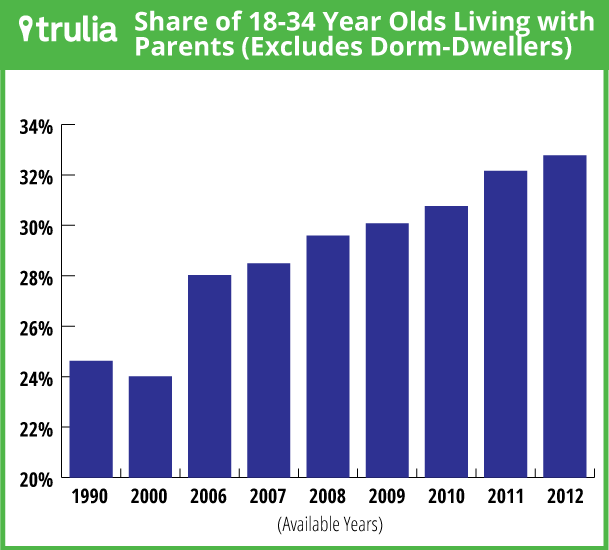 The vast majority of people who are in school and living in non-institutional group quarters are 18-24 year-olds, so we’ll focus on that age group. Dorm living has been on the rise as college enrollment has increased: 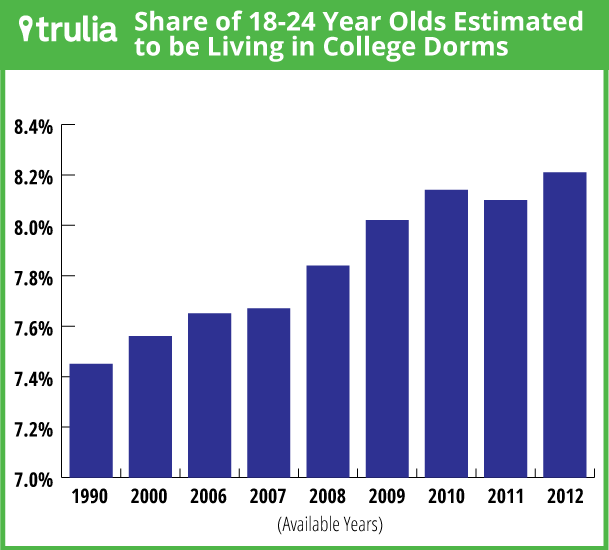 But the numbers of millennials living in dorms are relatively small compared with the share of millennials living with their parents. According to 2012 ACS summary data (see note), 2.6 million Americans lived in college/university student housing – out of nearly 24 million college and graduate students.

In fact, millennial students are far more likely to be living with their parents than living in a dorm. Among millennials in college or graduate school, 14% live in non-institutional group quarters (mostly dorms) and 41% live with their parents. And that gets to the crux of the issue. Even though the ASEC counts young adults living in dorms as living with parents, most college and graduate students reported by the ASEC as living with parents actually are, based on ACS estimates.

In short: the fact that the ASEC counts students living in dorms as living with parents explains little of the reported increase in millennials living with parents. Two different approaches to removing students living in dormitories reach the same conclusion: the share of millennials living under their parents’ roof jumped in the recession to the highest levels in a generation. That reduced household formation during the recession. Importantly, however, young adults now appear to be starting to move out of their parents’ homes and forming new households as renters — creating a surge in rental demand and triggering a boom in apartment construction.

Note: edited from original post to clarify that the data show millennials more likely to be living with parents than at any other time for which a consistent data series is available: 1986 for the CPS ASEC and 1990 for the decennial Census / ACS series.