The neighborhoods around major league baseball stadiums tend to have higher home values than the greater metro areas surrounding them, but those values vary widely based on stadium location.

Having a major league baseball team as a next-door neighbor requires a special kind of host. More than 73.7 million people attended regular season games last year, an average of 30,366 a game.

We took a look at homes within a mile of U.S. MLB parks (we excluded Toronto) to gauge how well baseball had made itself at home. We found that the areas around 18 of the 29 stadiums had higher median home values compared to the cities in which they resided. We also found that rents in those 18 neighborhoods were either higher or equal to those in the surrounding towns.

Newer stadiums also tend to be located in pricier neighborhoods. Of the 14 stadiums built since 1999, only two neighborhoods – around Marlins Park in Miami and Miller Park in Milwaukee – had home values lower than the metros in which they were located. Rents were higher in those neighborhoods too, except for those around Miller and Marlins parks.

When it came to older stadiums home values were more split. Of the 11 stadiums built in, or before, 1999, six had home values and rents at or above the median market rate.

Top of the Order: Where Home Values Are Higher

Urban or downtown stadiums tend to have higher values than surrounding metro areas. Newer stadiums including Citizens Bank Park in Philadelphia and Nationals Park in Washington made the top 10, but older stadiums with thriving neighborhoods such as Kenmore Square and Back Bay Fens around Fenway Park in Boston and Wrigleyville in Chicago also carried higher values as measured by home values. 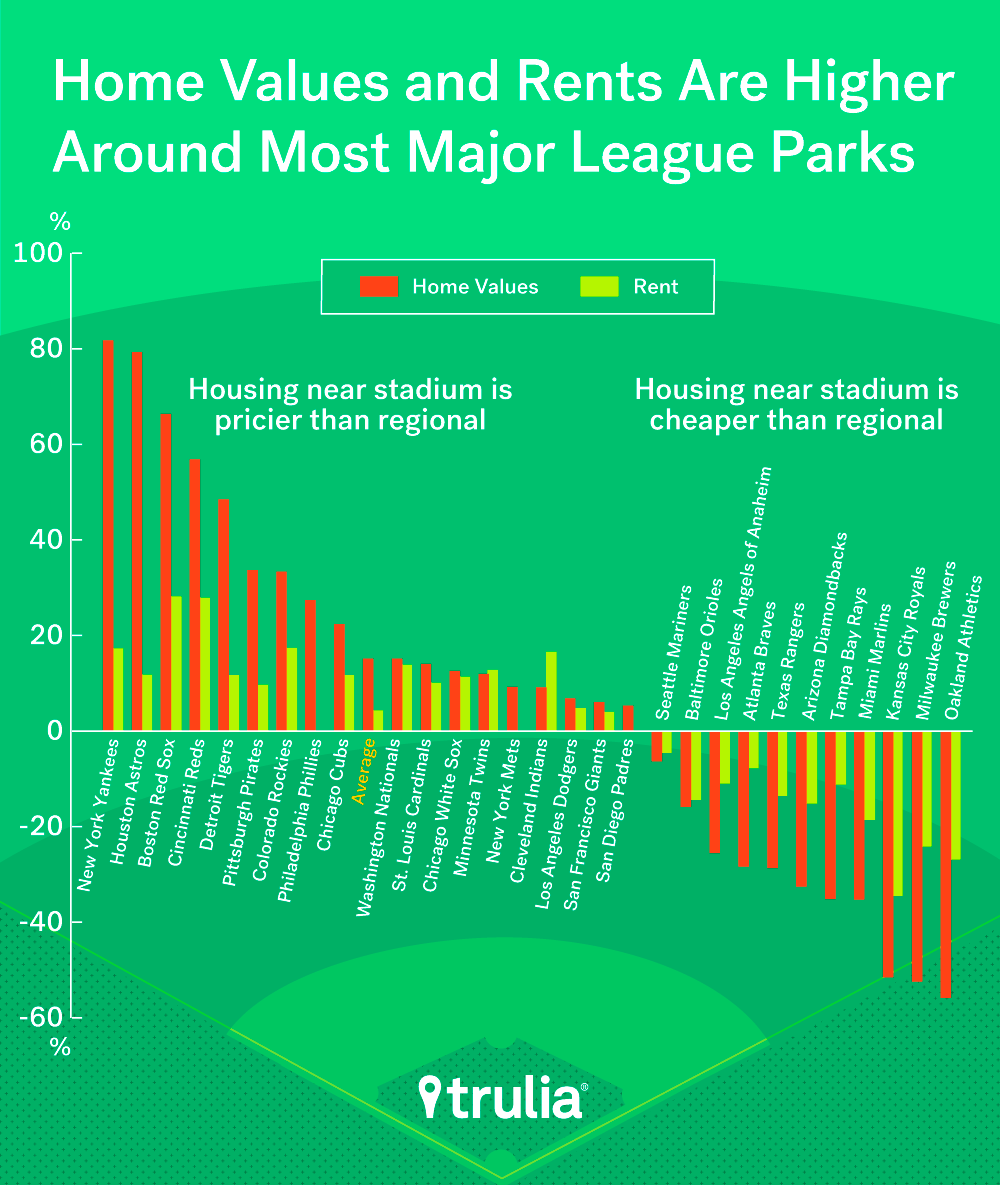 Bottom of the order: Older Stadiums and Unfriendly Locations

Home values tended to be lower around stadiums that were built more than 20 years ago – six of the bottom 10 were built before 1996 — including Kauffman Stadium in Kansas City, Mo., and O.co Stadium in Oakland, Calif. Other lower home values were found around stadiums in industrial areas or, in the case of Miller Park in Milwaukee, a lot of traffic from interstate highways.

Stealing Home: Where Rents Are Cheaper Near MLB Parks

Not surprisingly, it was cheaper to rent near stadiums where home values were lower. Rentals in Kansas City, Oakland, Calif., and Milwaukee were at least 20% below the greater market rate. Surprisingly, newer or renowned stadiums such as Marlins Park in Miami, built in 2012 and Baltimore’s Camden Yards, which became a model for parks built after 1992, were surrounded by neighborhoods with relatively lower rents.

Juiced Rents: Where It Costs More to Rent Near A Ballpark

If you love the game, the cheapest places to live close to a major league team are in the Midwest. Newer stadiums and very, very old stadiums such as Wrigley and Fenway carry a premium to their local markets.