A home is the costliest purchase most households will ever make, and it’s understandable to want to find the best bargain possible. This often leads to lots of leg work for diligent buyers – but sometimes, sellers do the work for buyers and advertise up front what a good deal their home is (or at least what a good deal they think it is).

We combed through the listing descriptions of all homes listed in the past year to see which ones were being described as a “bargain,” “deal,” or similar, and whether they were actually a good deal. To qualify as a true bargain, homes had to be listed at a price below their estimated value. As with most things in life, we found that some “deals” were too good to be true.

What’s more, not all listings advertised as a bargain actually offer a discount on that home. Camden has the highest discount in the nation – homes advertised as bargains are priced, on average, 21.1 percent below their estimated value. But listings described as a good deal in Cape Coral, Fla., are actually priced 3.1 percent higher on average than the home’s value—only 36.5 percent of homes listed as a “bargain” in this metro are actually priced at a discount relative to their estimated value. 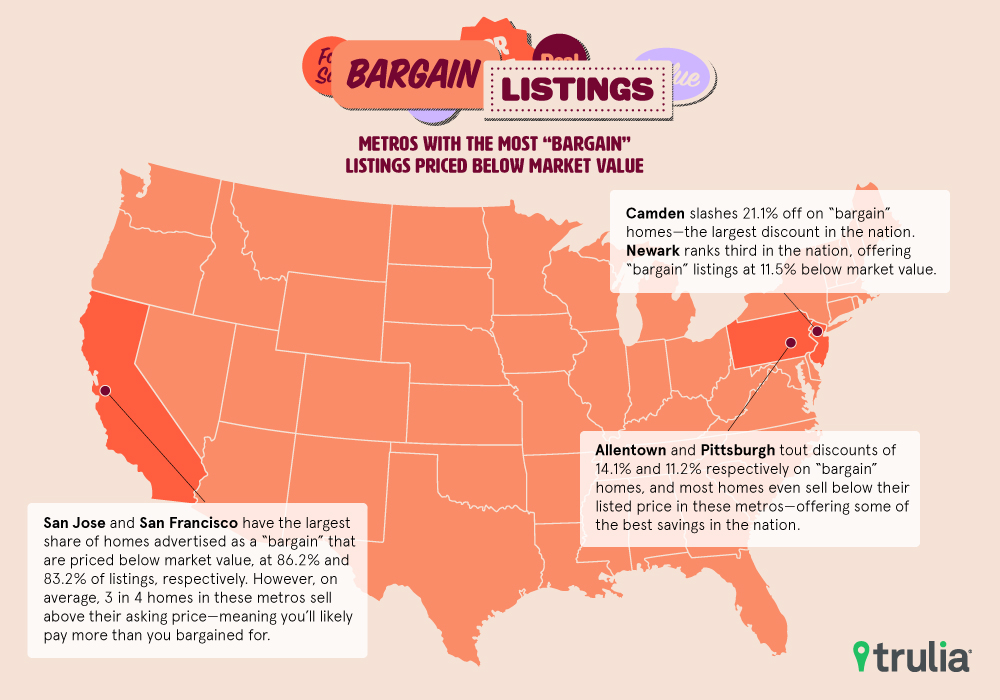 On the other hand, in San Jose, Calif., San Francisco, Calif., and Camden, N.J, the vast majority of bargain bin homes are actually offered at a discount – 86.2 percent, 83.2 percent, and 78.8 percent of properties described as a bargain in these areas, respectively, are priced below the estimated value of that home. But pickings are slim in San Francisco and San Jose – just 2.3 percent and 1.7 percent of all listings, respectively, are described as a bargain – perhaps no surprise for the priciest metros in the nation.

Among the metros with the highest share of discounted “bargain” homes, San Francisco, San Jose, and Seattle are outliers in a list otherwise populated with generally cheaper, slower housing markets. While it makes sense for sellers in slow markets to slash prices in hopes of bringing more prospective buyers in the door, what are pricey West Coast metros doing with bargain bin prices?

There are a lot of factors that go into determining the initial listing price of a home when it hits the market, and strategies can vary greatly depending on geographic and local economic factors. It’s likely that in typically faster-moving, more-expensive West Coast markets, some sellers may intentionally advertise a low offering price in order to stand out or attract more attention from buyers, understanding or expecting that homes typically sell for above asking price anyway.

And in fact, home bargains in San Francisco, San Jose and Seattle may be too good to be true. In these metros, more often than not, homes are sold above their asking price. About 3 in 4 homes sold in the last year in the Bay Area metros—76.5 percent of homes in San Francisco and 74.6 percent in San Jose—ended up selling for more than their original listing price. Exactly half (50 percent) of homes in Seattle sold above asking. ln markets where over-asking bids are the expectation, not the exception, a lower listing price at the beginning may not mean an actual deal in the end.

So while homes advertised as a “bargain” in San Francisco are listed at a 10.5 percent discount from market value, on average, properties in the metro sell for 11.0 percent over their listing price. Similarly, in San Jose, the bargain listed discount is 9.5 percent—but on average, homes also close at 8.5 percent over ask. Meanwhile in Seattle, that scant 3.9 percent discount on bargain listings may look even smaller, because homes in that area will typically sell for 2.1 percent over the original listing price.

We looked at all single-family homes and condos listed for sale on Trulia in the 100 largest U.S. metros from in the 12 months ending in October, and identified which ones were described with the terms “bargain,” “value,” “deal,” “under valued” and “under priced” to determine whether they were being advertised as a bargain. Only metros with at least 50 homes listed as bargains were included in the analysis. We compared the listing price of each home to its estimated home value during the month it was listed to determine the discount.

We looked at transactions that closed in the 12 months ending in October to determine the percentage that were sold above the original listing price, as well as the average difference between sales price and listings price for each metro.